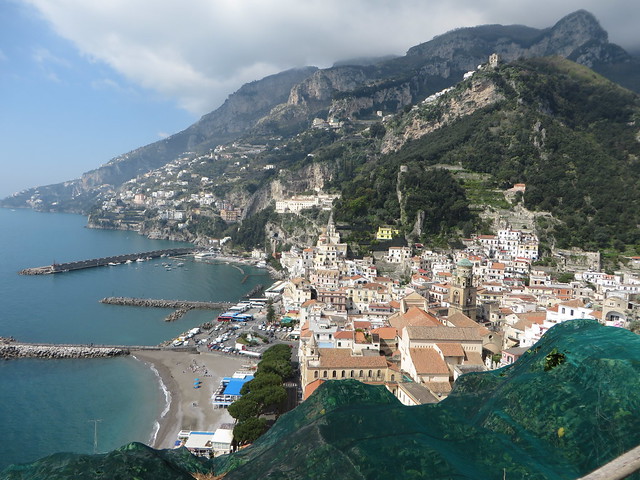 That miserable and storied month of February now over, I am acutely aware of how anxious and unhappy I was throughout. This didn’t occur to me while it was happening; only after the trapeze artist is safely on the ground again do you realize you were holding your breath the entire time.

And you realize how much worse it could have been. If only you could reach back in time and tell yourself: everything will be okay. I am not there yet – as I told a friend last night, I still don’t know what will happen to my book, and so I can’t yet say, “It was all for the best.”

It reminded me of Italy, of a story that Rand has been begging me to tell since not long after it happened. 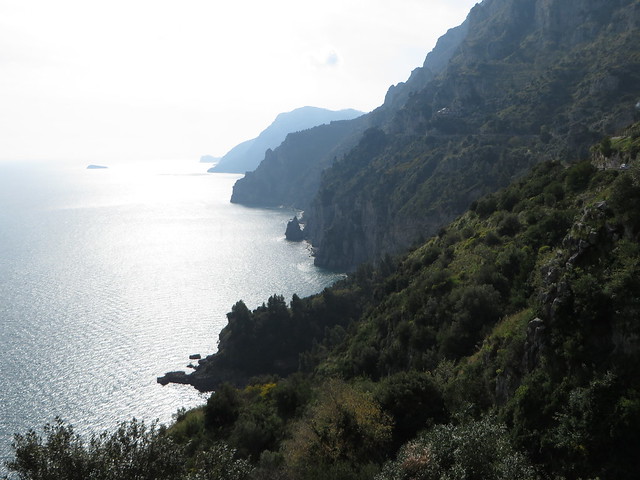 One view from along the Amalfi Coast Highway.

We rented a car to drive along the Amalfi Coast Highway – a femme fatale of a road, beautiful, untrustworthy, absurdly dangerous. The rental car agency had only one automatic in their fleet – by Italian standards, it was a lumbering beast of a vehicle. When I first saw it I could scarcely believe it.

“It’s huge,” I whispered to Rand. It dwarfed every other vehicle in the lot.

We’d just landed in Naples, and were going to drive to my grandfather’s village that night. My husband would, over the next few days, maneuver that four-wheeled Behemoth through the chaos of Southern Italian highways and a labyrinth of narrow village roads. White-knuckled, I would grip whatever was in easy reach – the seat cushion beneath me, the door handle, the dashboard – and did my best not to choke on my anxiety.

Driving in Italy is like mastering a complicated language. Outsiders try for years, but are barely proficient. But if you are born into it, there is nothing else.

The rules are not what you think they are. I remember riding in a car with my cousin a decade and a half ago, during a hedonistic summer spent gallivanting around Italy, trying to outrun the grief of my grandparents’ death. I noted that in Italy, the red “STOP” signs were printed in English.

He nodded, then proceeded to drive directly through one without so much as slowing down.

He has been in America for a decade now, and I’m sure if I told him about that incident, he would marvel at his own hubris. He said after so many years in the U.S., he doubted he’d be able to drive in his home country as easily as he once did. The bravado has faded; he is no longer fluent in Italian roadways.

Rand knew all of this. He’d heard our stories, he’d driven in Italy before. He is one of the best drivers I know: attentive, competent, calm. Even he was not ready for Amalfi’s highway. 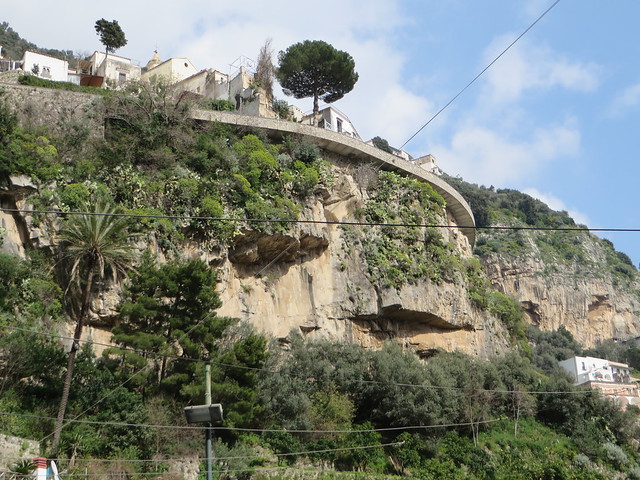 The highway, as seen from below. It is build like a shelf into the Amalfi cliffs.

The road began innocuously enough. Gentle curves along a rocky cliff. But as it gets progressively more lovely it also gets progressively more terrifying and unsafe. It’s as though the civic engineers designing it, if indeed there were any, got distracted by the view and decided they no longer were bound by the laws of physics.

Incidentally, this is a good mindset to have when driving on it.

Along the coast, the road becomes increasingly narrow, until it is as scarcely as wide as an alleyway in the states. Motorists, undeterred by this, or possibly just asleep at the wheel, zipped down it in both directions. Some of the vehicles – scooters, Smart cars, even the occasional ancient Fiat – seemed perfectly suited to the sharp turns and exiguous lanes. 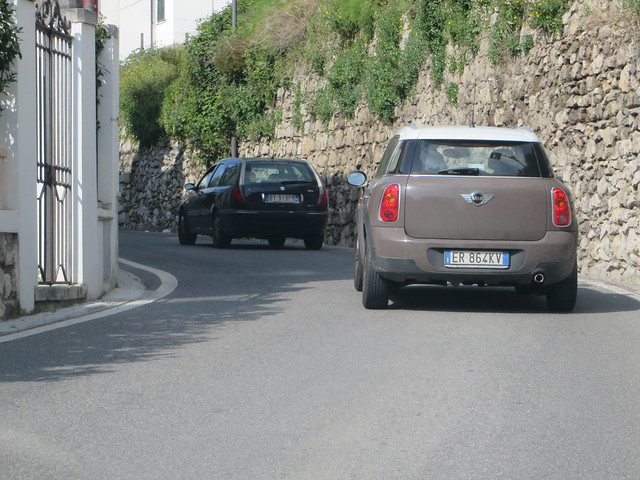 Notice the width of the lanes – the car in front of us is a Mini.

But because this is happening in a country whose unofficial motto is “Non me ne frega un cazzo,” (loosely, “I don’t give a fuck.”) there are dozens of massive tour buses, too. 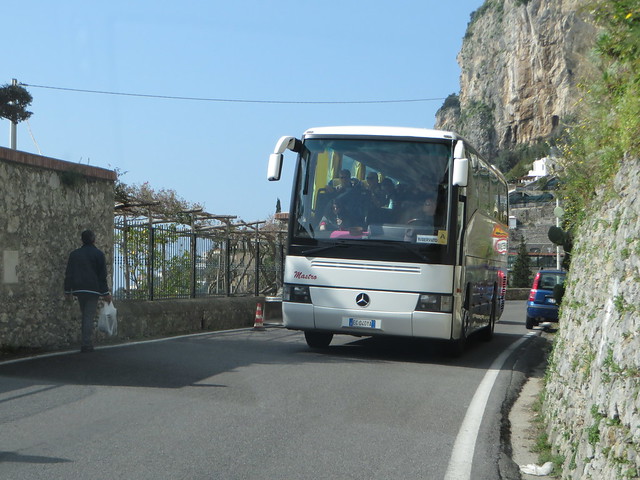 This was oncoming traffic. Notice the amount of clearance the bus has left us.

And there we were, foreigners in an almost-comically large vehicle, trying navigate roads that seemed to mimic the flight path of a drunken moth. Rand hugged the edge of his lane as best he could, our side mirror so close to the jagged mountainside that I eventually had to fold it inward lest we lose it. But when no one was coming we, and all the other drivers in both directions, would inch closer to the center – away from the rock wall that flanked us on one side, and the precipitous edge of the road on the other.

This meant that when we did encounter on-coming traffic, we were headed directly for it, and it for us. This often happened around blind corners, so that there was little time to react. Rand perfected the act of turning the wheel just so while slowing down and simultaneously cursing. I began to whisper the prayers that my grandmother would recite each evening.

It was less a return to the Catholicism I had strayed from years ago, and more something with which occupy my larynx other than screaming.

“It’s  like a video game,” Rand would later say to me, “but one with horrible consequences.”

It was inevitable that we got into an accident. The fickle mistress of fate can only be tempted so many times before she strikes. Even then she retains her sense of humor: our accident did not happen on that beautiful hellish road. It happened in a parking lot. After Rand had been driving expertly for hours, after we were within shouting distance of our hotel, we made a wrong turn.

And dearest, forgive me, but it must be said: I told you not to. Had we continued on the road we were on, we’d have arrived at our hotel. But we turned. Into a parking lot.

There, for a moment, my American Andretti let his guard down. There, as he backed up, he hit a car. I should note that it was illegally parked. But this was Italy – such a statement is both redundant and irrelevant: all cars are parked illegally, and none are.

And besides, I still blame the highway.

I sat, shaking. Unable to think and, I realized, unable to hear, at least momentarily. Rand got out of the car, assessed the damage, and started to leave a note.

He got as far as “ciao”, before realizing he didn’t know Italian.

I didn’t cross it out. It was a solid beginning.

My Italian is not perfect under the best of circumstances. Under the pressure of that moment, my fluency became as garbled as the fender we’d bumped into. The word I wanted was “sbattuto” – we hit your car. Instead I wrote battuto – we beat your car.

Never mind. When we were contacted, days later, the owner of the vehicle questioned my sanity but not my grammar. He noted that we were the first people in the history of Italy to have ever left a note. The price of our integrity came out to 600 Euros. Even through the email, I could hear him incredulously laughing.

The memory of this still smarts a little.

But this was later. After we left the note, we still had to get to our hotel. It was cruelly close – we could walk the distance in a matter of minutes. The drive took us seconds. When we arrived, a charming head valet would take Rand’s keys and ask us how our drive was.

I have forgotten his name. But his face, his voice, his actions, these would become indelible. Still rattled, I told him everything that happened. Together, we surveyed the damage. The side of our rental car had been gouged. A cruel dent stretching from the front door to the back. I winced.

He told us not to worry.

The hotel would turn out to be one of the most beautiful I’d ever been in. Our view of the water was unspeakably lovely. But the accident hung over us like a fog that would not lift. Everything would be okay. But we didn’t know that yet. 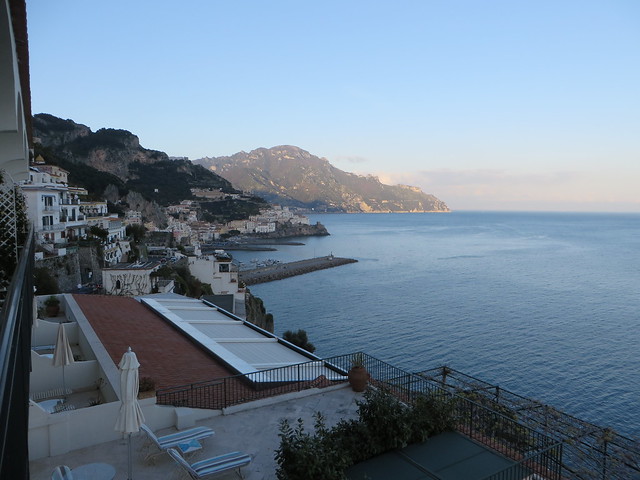 The view from our hotel room.

“I feel like this highway is a character in our vacation,” Rand would later say. “It’s the villain.”

The next day, we walked into town (we were talking no chances), and upon our return, we saw what appeared to be our rental car in the parking lot of the hotel. But nearly all evidence of the accident had been erased. Rand walked up, touched the doors, his brow knitted in puzzlement.

The head valet approached, explaining that he buffed it out as best he could, and apologizing for being unable to fix the damage entirely.

Rand replied by hugging him.

He tipped him too, of course. But I suspected that he got plenty of tips. His reaction to Rand’s hug (he reciprocated, and laughed, and slapped my husband on the back), suggested that he did not get many of those.

The fog lifted a little.

Our remaining days in Italy would be wonderful and chaotic. I remain both grateful for them and in no rush to return. At the end of the trip, we drove back to Naples to drop off our rental car. We handed over the keys, and the attendant at the agency said he just needed to check the car for damage.

I braced myself, trying to figure out what story absolved us from guilt. There wasn’t one. It wouldn’t matter.

In the end, he would only ask me this: Had we scratched the passenger side mirror during our drive?

I stared at him blankly and replied that we were honestly unaware of any damage to the mirror. He nodded, explained that it was minor and we would not be charged for it. Other than that, the car was fine.