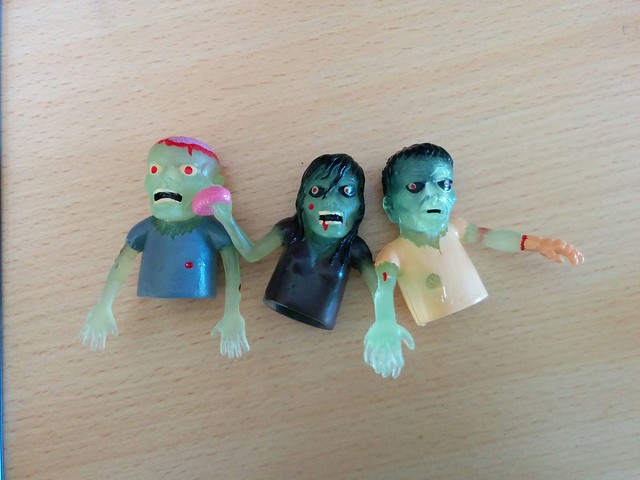 Zombie finger puppets that I sent Chad, because I have a warped sense of humor.

Exactly three years ago, I had brain surgery for the first and only time.

Last week, my friend Chad had his fourth brain surgery.

We started writing to one another during that strange, pivotal summer three years ago. I was still groggy from the procedure and ravenous from the steroids I was on. Chad had had the first surgery in his quartet just a few months prior. He was diagnosed with glioblastoma, a type of brain cancer that, in his words, you shouldn’t Google because “all you’re going to find is depressing survival rates of 3 to 4 minutes.”

Oh, yeah. Chad’s funnier than me. I should have mentioned that.

We wrote to one another about being headachey and hungry. He discussed his brain cancer. I discussed cupcakes.

Along with my own birth and meeting Rand, my brain surgery remains one of the most significant moments of my life. In the years since, it’s been absurdly humbling to watch Chad go through a far more serious variant of my experience four times, with a radically different diagnosis, while undergoing a handful of medical trials. All while maintaining an incredible blog, writing a screenplay based on his experiences, and starting a charitable foundation.

Even the manuscript for my own memoir – broken and floating in limbo such as it is – exists in part because of Chad. I sent him a chapter of it every month, and if ever I was late, he’d pester me with the most annoyingly encouraging emails.

It’s not a contest. But if it were, he would win. The jerk.

His surgery last week was to remove the regrowth of a tumor, and to inject a genetically modified cold virus into his head as a means of treating his brain cancer (it’s part of a clinical trial, and he’s the first person to receive this treatment. Ever).

In the days preceding his surgery, we exchanged a few emails, in which he made sure to mock me for only having had one brain surgery (which is something that you get to do when you’ve had four). I decided to send Chad something commemorating his most recent stint in the hospital. Unfortunately, I found Hallmark woefully lacking in the “Happy Fourth Brain Surgery” cards department.

They didn’t have any “Holy Shit, You Have Brain Cancer” cards, either. Or even cards about cancer in general. They literally have Father’s Day cards written from the point of view of the family dog, but they don’t have a single card that talks about chemotherapy or cancer. Which is weird because I know lots of people with cancer but I don’t know a SINGLE HUMAN BEING WHO HAS SIRED A DOG.

A few months’ back, I’d read about a designer who made the cards that she wishes she’d received during her cancer treatment. So I figured I’d take a page from her, and make a few cards for Chad myself.

Since I’m woefully bad at anything remotely related to graphic design, I just cut and pasted things on existing cards. They look terrible, and they’re borderline offensive. So I’m pretty sure Chad will find them hilarious.

This one was originally for a Bar Mitzvah. 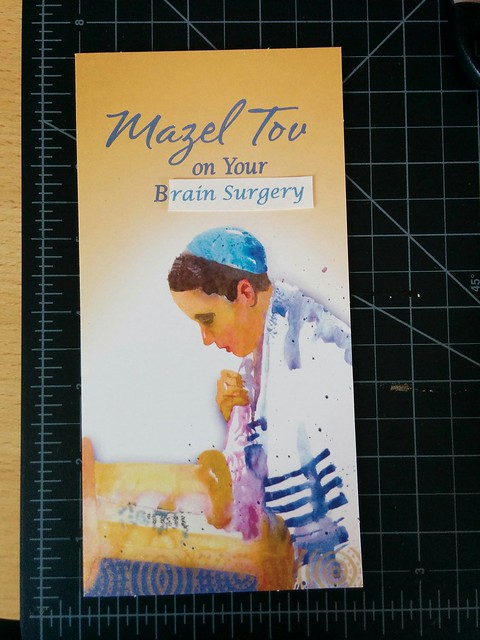 I was hoping that the inside said something like “Congratulations on becoming a man,” which would have been perfect. But instead it was this: 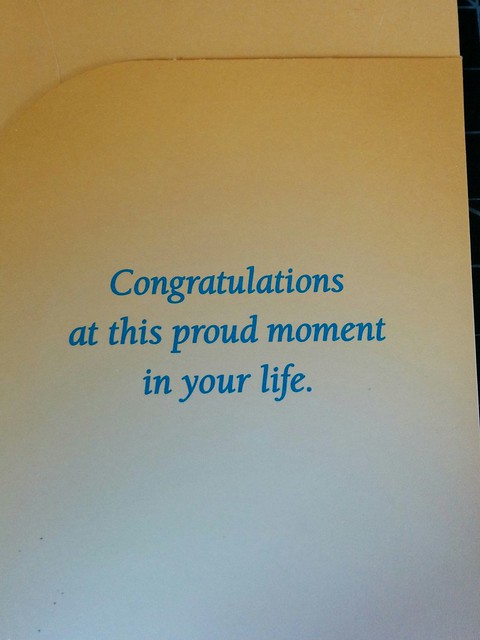 I made it better: 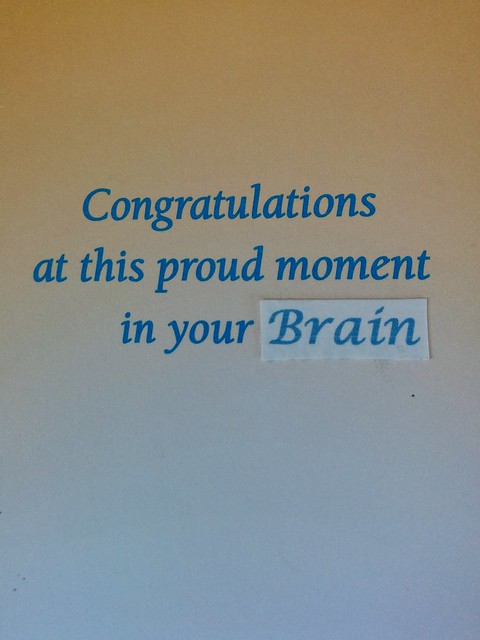 The card was obviously intended to hold money or a gift card, but I just put a half sheet of Elvis stickers in there because I’m kind of an asshole. 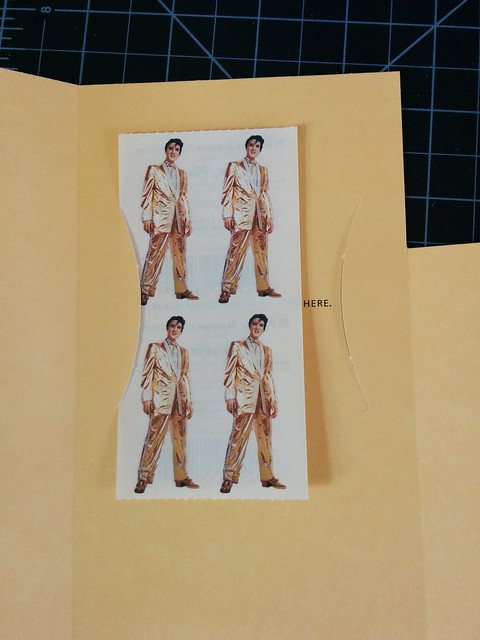 I liked the idea of combining a cute little doggy with gratuitous use of the f-word, so I did: 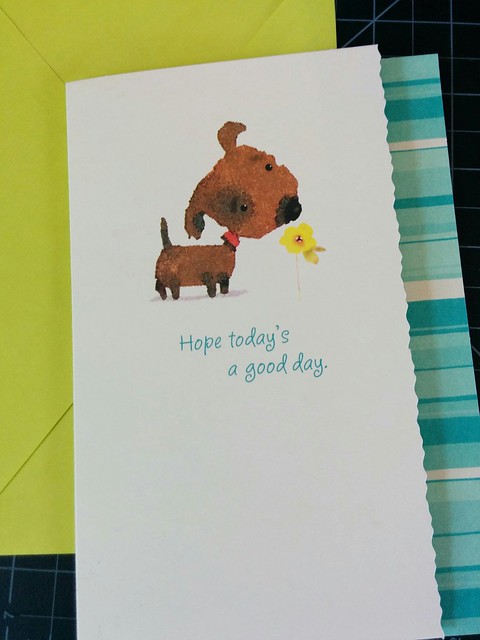 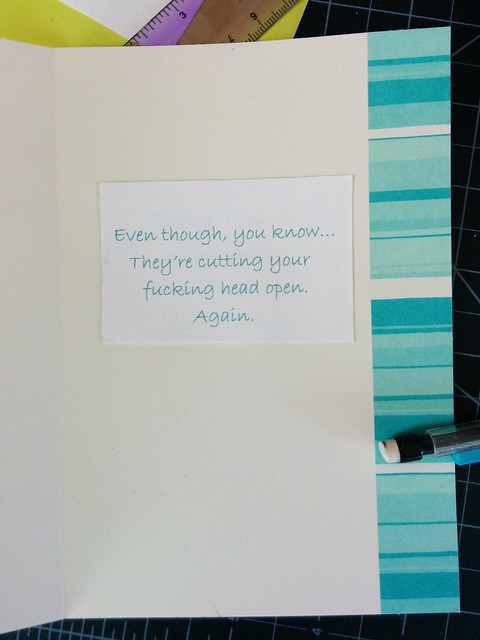 I think this card was intended for women who are going through menopause, which Chad is not. 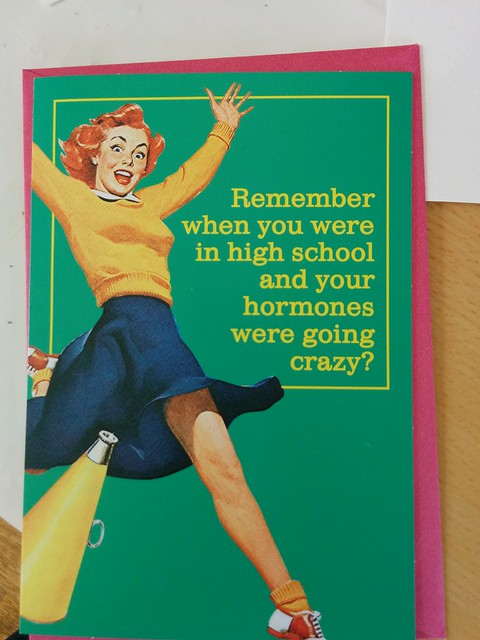 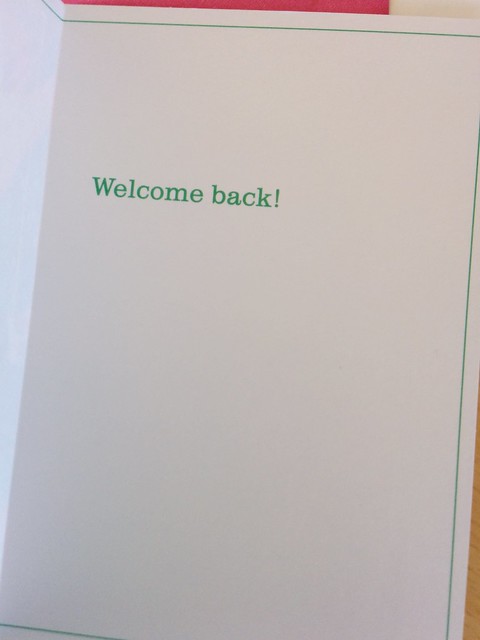 But I figured it would apply to someone who was taking crazy amounts of steroids (they’re used in cancer treatments, and also post-brain surgery to stop your brain from swelling), so I just left it alone.

This card didn’t really make sense to begin with. It was something about how platypuses are unique and special or something.

Anyway, I modified it. 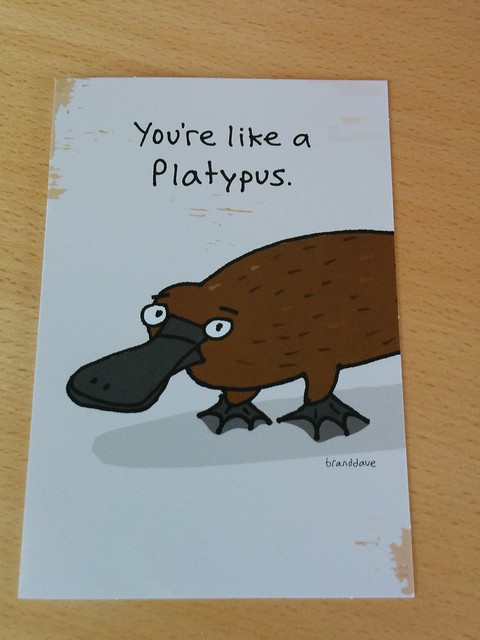 I didn’t spill anything on the front. Those stains were there. #thatswhatshesaid 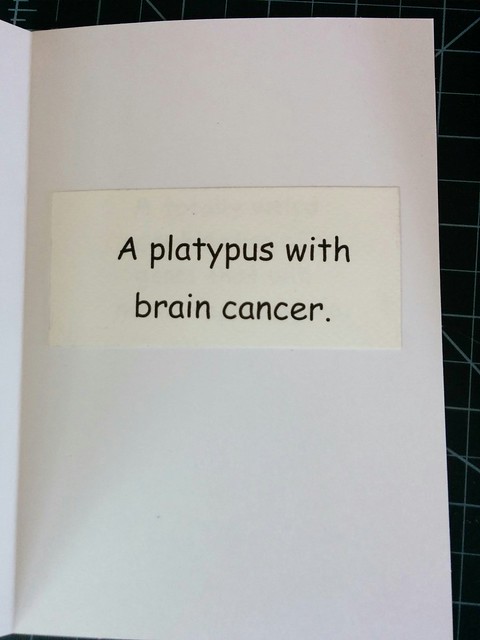 I also sent Chad a bunch of zombie-themed presents, which, granted, is totally cliché. He always gives me a hard time because I apparently make jokes that he’s heard a thousand times before, so I just figured I would own it. 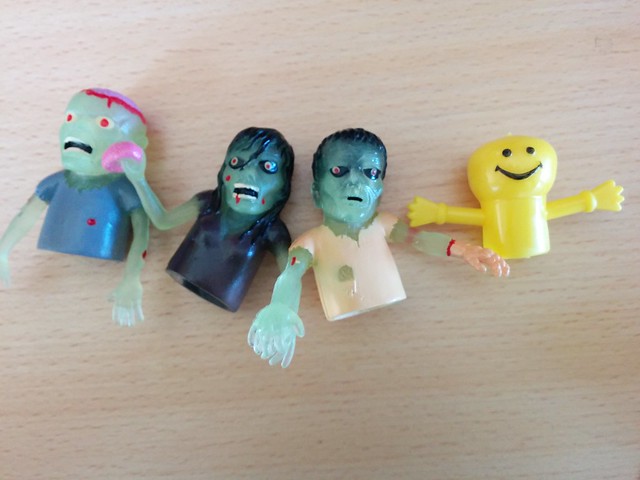 I got him some glow-in-the-dark zombie finger puppets, but then I decided they were really scary, so I included a smiley finger puppet, too. He’s going to get eaten.

Plus, I found a store that sold the exact same brain ice-cube molds that my friend Karen (who has also had numerous brain surgeries, because I am friends with awesome people) gave me after my surgery, so I couldn’t NOT send them to him. 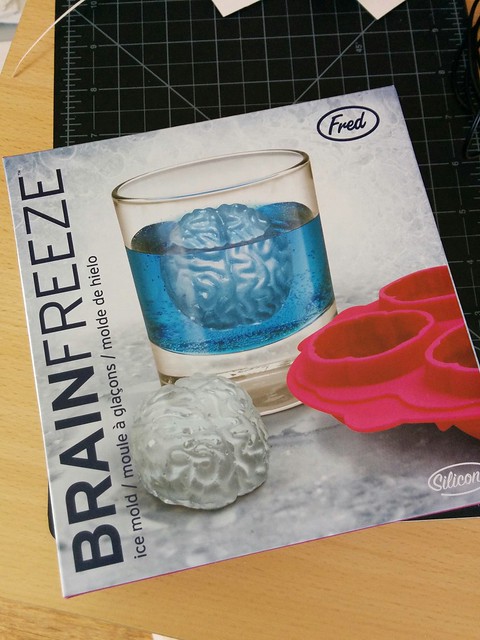 THERE HAS NEVER BEEN A MORE APPROPRIATE GIFT THAN THIS.

Chad’s last surgery went well, but it’s left him with an unprecedented headache – which hasn’t happened before. And since he’s the first person to have ever had the procedure done, it’s kind of uncharted territory. His response to all of that is, as usual, funny and upbeat. Even though he’s feeling like crap.

If you are interested in supporting him or his endeavors, then please check out his charitable organization. They’re raising money to make a movie that will, in Chad’s words, cure cancer (because if you can bring some levity and joy to the life of someone who is ill, you can cure them – at least for a little while). You should also check out his blog, and see what he has to say about cancer, and life, and brain surgery. It’ll make you laugh. And if you can relate to any of it, it’ll make you feel less alone. It did that for me three years ago. And it still does that now.

P.S. – I’m sure some folks are going to send me scathing emails about how they don’t think any of my gifts were funny. That’s cool. They are entitled to that opinion, and may shout it from rooftops. We all choose different paths. Mine is lined with crude jokes and zombies.