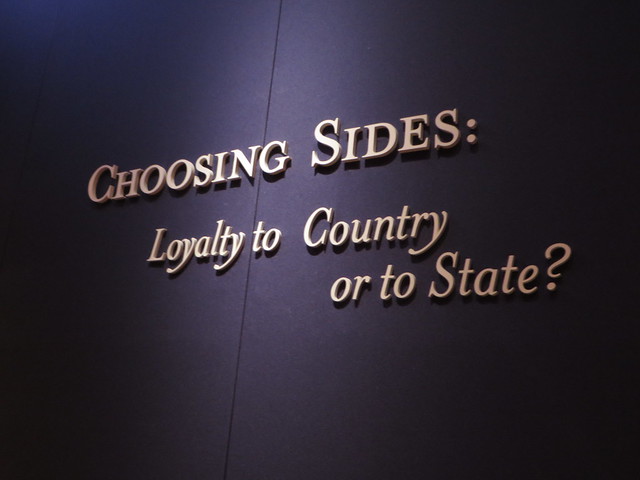 I really think this should say “Loyalty to Country or to Slavery?”

Late last year, Rand and I visited Raleigh, North Carolina, and after reading glowing online reviews for it, I spent an afternoon at the North Carolina Museum of History.

I was appalled by it.

I’ve heard of revisionist historians, of people who claim the Civil War was about something other than slavery, but I figured they lurked in shadowy corners and hid their true intentions, the way cartoon villains did. I didn’t think they would openly proclaim their ignorance and bigotry proudly. I certainly didn’t think they’d be curating museums.

There is more to the history of North Carolina than I will discuss today – it was one of the original 13 colonies; it was home to the lost colony of Roanoke; it was a participant in the genocide of indigenous peoples that happened under President Jackson’s Trail of Tears.

I am focusing exclusively on slavery in this post because that’s the chapter of the state’s history that the museum focuses extensively upon. It is also a chapter of history that I know enough about to safely say that the museum grossly misrepresents the truth. It tells an apologist narrative, repeatedly making the claims that “it wasn’t about slavery” and that things in North Carolina “weren’t that bad.” 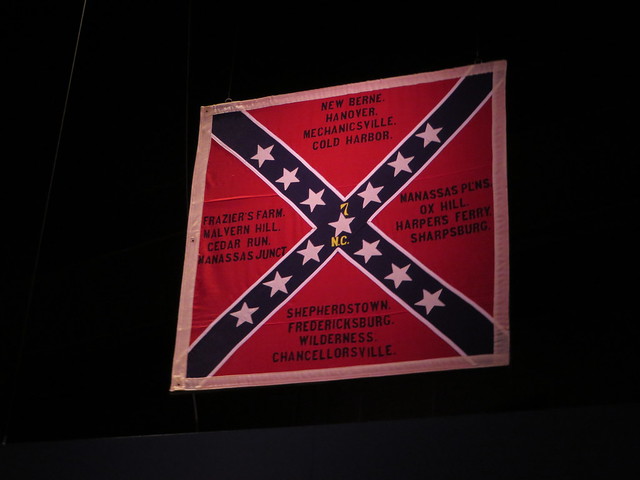 The Confederate flag was everywhere. Interestingly, I later learned it wasn’t the official flag of the Confederacy, but gained popularity among racist groups in the aftermath.

The museum’s viewpoint is a dangerous one, because it enables us to downplay the horrors of slavery, to ignore the fact that it played a pivotal role in making America what it is today. Not having to pay for labor put our fledgling nation at a financial advantage. It’s an ugly truth, but it’s one that we need to stop ignoring.

And we need to stop ignoring the legacy of slavery – that the ramifications of it are still seen today in every facet of our society and most of us are complicit to this in our silence.

Also, George Washington was an asshole.

But the North Carolina Museum of History ignores those realities. And because of the inherent authority that comes with being a museum, people listen. Including school group after school group of children. They sat quietly, watching films that described the bravery of Confederate soldiers fighting for their rights (a narrative that was somehow delivered without acknowledging even a hint of irony) and they clapped afterwards.

“That was a good movie,” one little girl said after it was over, smiling brightly.

Here are some of the specific claims made by the museum, and my thoughts below. (Forgive me if the structure of this post is all over the place. I was trying not to turn in a tornado of sputtering rage). 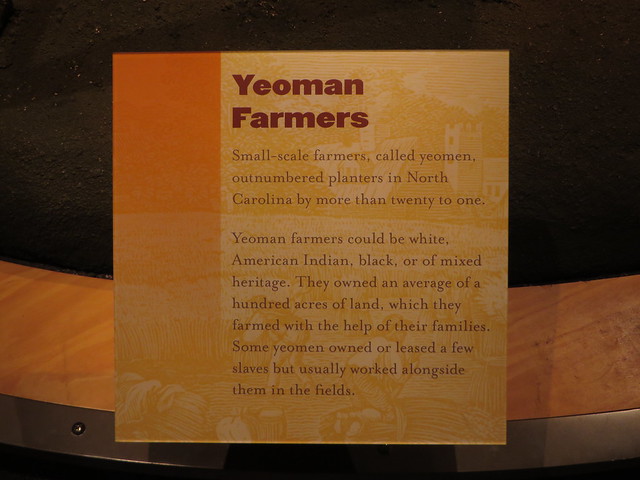 The museum makes it very clear that slave owners (a term that is virtually unused in the museum) weren’t just white people.

I have tried to find evidence supporting this, and most of the sites that do are, I shit you not, thinly veiled white supremacist websites (note to my husband: I am really, really sorry for this means for my web search history). I can’t find any reputable websites that support the claim that there was black slave owners, but the more salient point is this: the overwhelming majority (if not all) slave owners were white people. And even if they weren’t, THAT STILL DOES NOT MAKE SLAVERY OKAY.

Claim: “There were very few plantations in North Carolina!”

This was repeated ad nauseum throughout the museum; other sources I’ve found suggest it isn’t true (noting that North Carolina had an “extensive slave plantation system” and was a major exporter of cotton and tobacco, and other crops that were grown with slave labor). So while there were plenty of plantations in North Carolina, there were fewer than in neighboring states. And let’s be very clear: the reason there were fewer plantations wasn’t because of some sort of moral opposition to them – it was because the terrain of the state didn’t allow for it.

This, too, was repeated again and again. Like, “Hey, everyone! We aren’t that bad! Just look how many slaves those people have!” WHICH IS NOT A VIABLE ARGUMENT. And considering that the neighboring states were South Carolina, Georgia, and Virginia, it doesn’t seem like much to brag about. And, again, it wasn’t because of some sort of moral opposition to slavery – it was because the state didn’t have as many plantations, and because North Carolina’s shores weren’t safe enough for the slave ships to land. Because of this, a lot of slaves in North Carolina were sold to other southern states that required more labor.

Claim: The South was Oppressed by the Federal Government

People still utter this today when talking about the Civil War – it had nothing to do with slavery! It was about states rights! But the main “right” in question was whether or not the states could own slaves. Don’t kid yourself – the south was a slave society. It was the foundation of the economic and social structure of Southern States.

And it’s interesting that numbers line up so perfectly – people claim that the Civil War wasn’t about slavery, yet every single state that seceded had slavery. That’s not a coincidence. 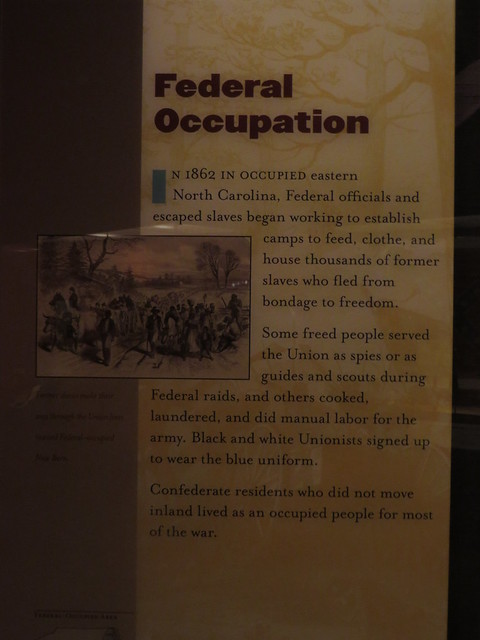 The museum actually uses the term “Federal Occupation” when describing the government’s attempts to stop secession.

But let’s talk about the chutzpah here: slave-owners were claiming that they were being oppressed. Some of the placards in the museum talked about how the Federal Government stopped ships from entering the harbor, which meant that North Carolinians had to go without necessary goods like coffee (ever resilient, they boiled chicory instead).

Wow. How brave of you to forgo your latte while you fight for your right to own other people. 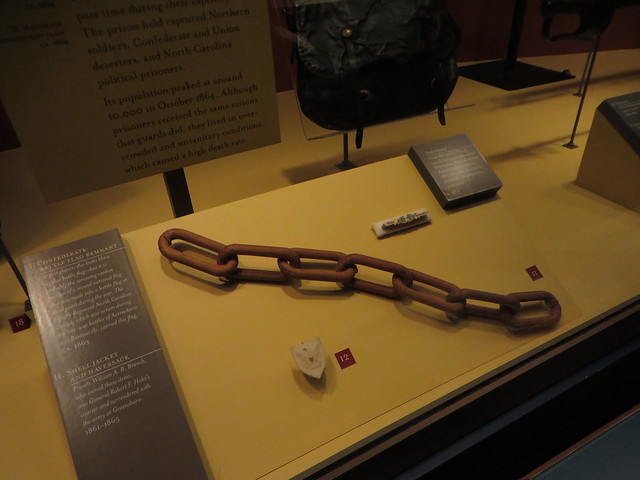 This chain was whittled by an imprisoned Confederate soldier who apparently didn’t understand the meaning of irony.

One of the videos talked about how many North Carolinians were shocked that Abraham Lincoln had been elected – his name hadn’t even been on the ballot in their state. It painted the election of Lincoln as a sort of unjust dictatorship that had been foisted upon the people in North Carolina (when in actuality, he was left off the ballot by many southern states so that votes could not be cast in his favor).

Let me reiterate that: southern states left Lincoln off the ballot so that he couldn’t receive any votes, and then people in the south felt slighted when he was elected because he wasn’t even on the ballot.

The entire narrative that the museum tells is from this viewpoint. There is no real mention of the horrors of slavery. No graphic depiction of people who were whipped and maimed, of families torn apart, of women raped. Nope. The only images we see of slaves are idyllic ones. I mean, look at how peaceful her expression is: 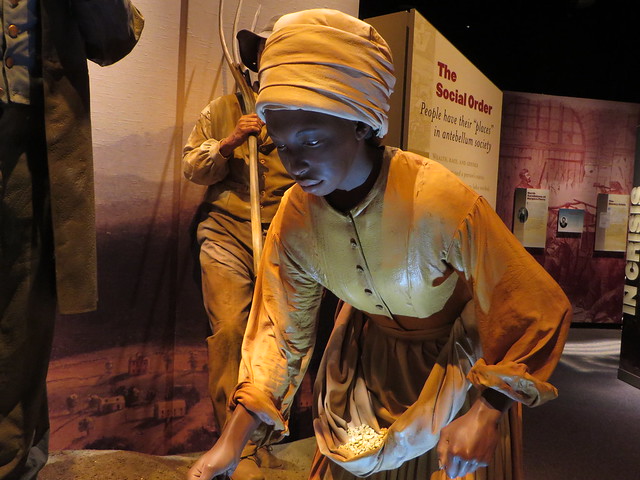 But look how much suffering is etched onto the face of this white woman who had all her free labor taken away from her: 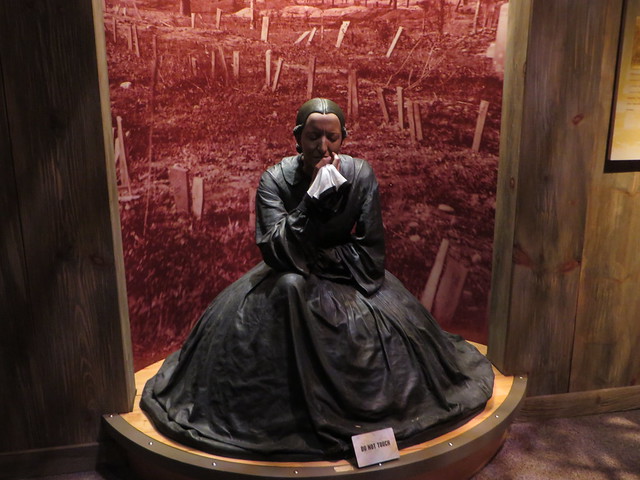 The museum goes on to describe how Confederate soldiers died bravely, far from home. How many returned home maimed or wounded, and found they no longer had homes to go to. 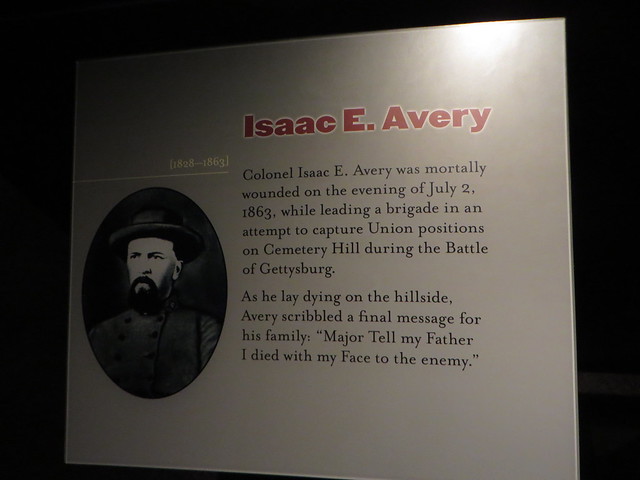 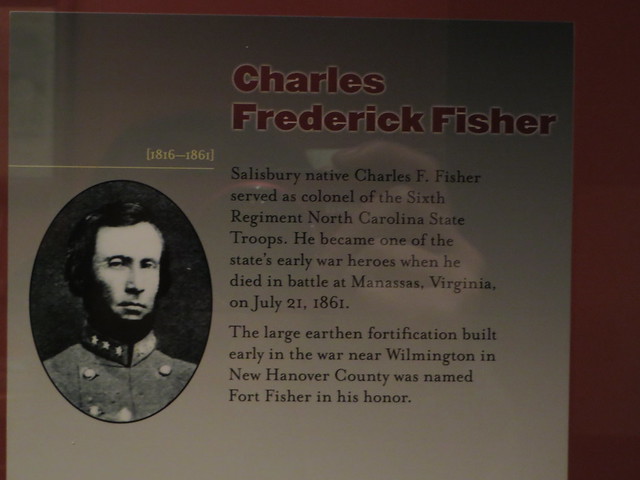 There are countless buildings, streets, and monuments in North Carolina named for Confederate soldiers like Charles Frederick Fisher. On this sign, he is described as a hero. 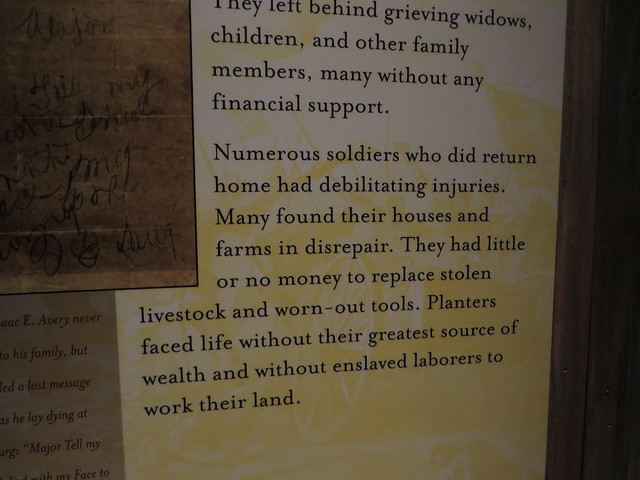 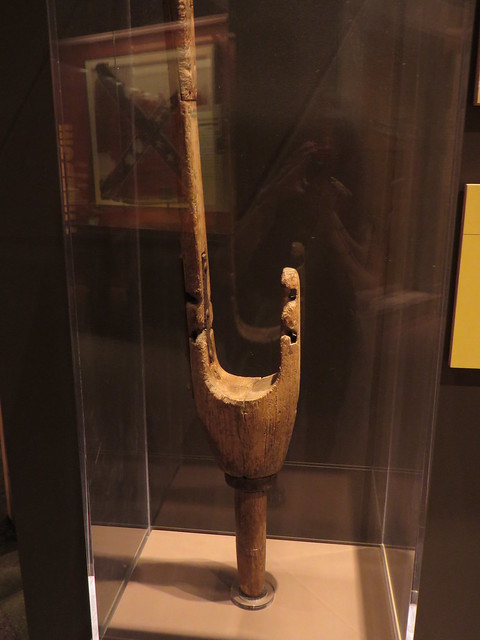 A prosthetic used by a Confederate soldier whose leg had been amputated.

Again, no mention of the horrors of slavery; the museum just focuses on the suffering of white slave owners. 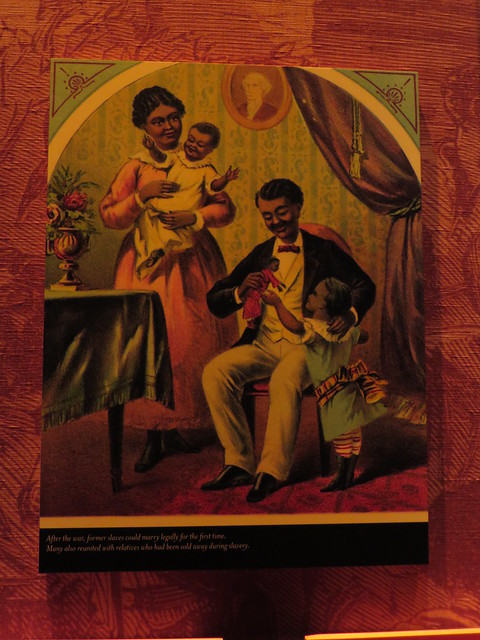 The depiction of life after the war was that Southerners had it incredibly difficult while things for black families was easy and idyllic. (Completely ignoring systemic racism, Jim Crow laws, etc.)

Oh, and then the entire exhibit ends with a KKK mask. It’s a replica (the original belonged to a confederate soldier). The placard talks about how the KKK operated on fear, omitting the fact that they also operated on violence, torture, and murder. 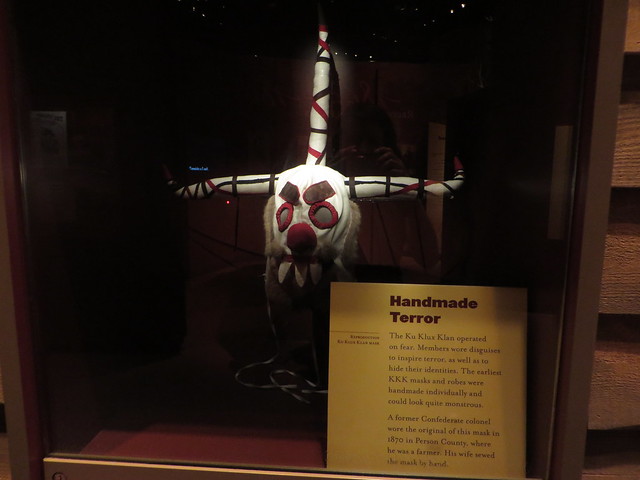 I realize that I am basically standing on a soapbox and calling out the North Carolina Museum of History for this, but this ugly, dirty reality that the museum is running away from? It doesn’t just belong to North Carolinians. It belongs to all Americans. Even if your family fought for the Union instead of the Confederacy, even if they came to America in 1980 instead of 1780, we still live in a country that was built on slavery and we need to acknowledge that. We need to look at that ugly truth square in the face and try to understand how it shapes America today (because holy shit does it ever). And we need to talk about how to make things better.

But the North Carolina Museum of History does not do that. It tells a cowardly, inaccurate, and apologist history of the Civil War.

I walked out of the permanent exhibit stunned. I couldn’t remember seeing something in a museum that was more shocking or biased. And that was when I saw this: 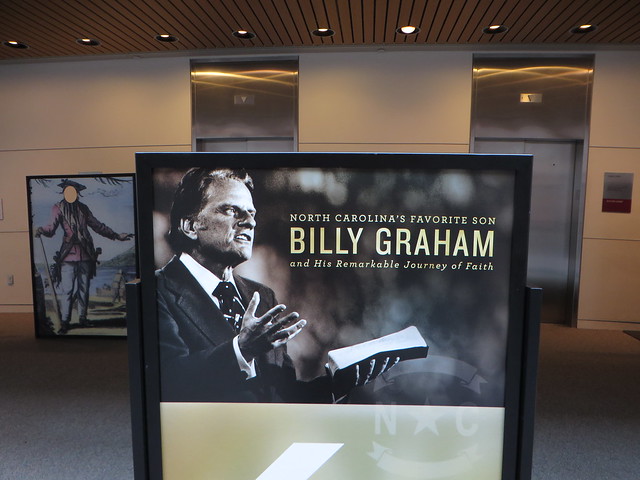 An entire special exhibit dedicated to Billy Graham. A huge, sprawling gallery lauding the life of a homophobe who said, “We traffic in homosexuality at the peril of our spiritual welfare.”

A museum praising the legacy of someone who believes that conversion therapy can undo homosexuality. That homosexuality is something that needs to be undone in the first place.

The exhibit featured quote after quote from Mr. Graham (carefully omitting any discussions about homosexuality or women’s rights), and video recordings of his sermons blaring at high volumes. They were all playing concurrently, and because the gallery had no walls, the sound of all of them blended together in an incomprehensible noise. A disembodied voice yelling at me from every direction.

At least admission was free. It meant that I didn’t have to ask for my money back.

P.S. – This was a difficult post to write because it is not my story to tell.

I am a very privileged white woman, married to a very successful white man. We live in the northwest. We don’t experience racism or bigotry, other than to benefit from our own white privilege (something we don’t usually notice because, as someone once brilliantly put it, “Fish don’t see water.”) My viewpoint has been heard before. If you need a specific source, take a look at all of history, ever.

There is no way for a white person to discuss slavery or racism without being inherently hypocritical. I can scream about injustice in the world and still remain a beneficiary of a system that is inherently racist in my favor. And admitting that doesn’t absolve me of anything, either. Even my criticism of the status quo is a privilege, because I know that my criticism will be heard. That I can shout it from rooftops and know that my wealth and race protect me.

That is profoundly fucked up. But refusing to admit it doesn’t make it any less true.