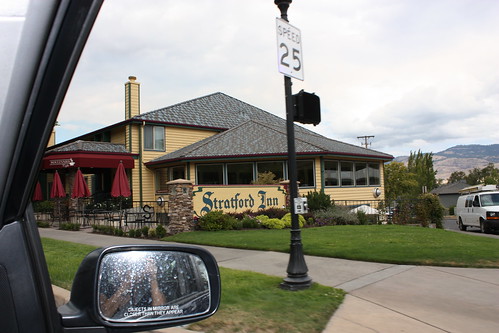 The lamest hotel in Ashland: I couldn't be bothered to take a better picture than this.

I’ll confess – I’m beginning to worry that roughly a quarter of all my posts are Dick Moves. Am I growing impatient with humanity? Is it impossible to avoid frustration and Dick Moves! while traveling? Are we too stressed as a society to be nice to one another?

I’m not really sure. My husband rarely loses his patience with anyone. I once told him that if everyone on the planet lived like he did, the world would be a better place. I know there are those that disagree with me, and they can go f*ck themselves (a sentiment which, upon expressing, makes me realize how different Rand and I are).

The point is, I ocassionally try to be a better person, and when I do, it’s all because of Rand. And I really honestly tried to be good with the Stratford Inn. But everyone has their limits. Especially hot-tempered girls who are only pretending to be nice. So when I say this did not begin as a Dick Move, I mean it. But after a while, even Rand agreed with me. Dick Move, Stratford Inn.

Just over a month ago, we booked a room at the Stratford Inn in Ashland, Oregon, for our one-year anniversary. Ideally, the Stratford wouldn’t have been my first choice, since it’s a bit far from the downtown core, but there was literally nothing available anywhere else. Mid-September is usually the last warm weekend of the summer in Ashland, and everyone knows it.

We made our reservation online, and breathed a sigh – Rand had tried a half-dozen places with no luck, so we were pretty relieved we finally had a place. About an hour later, I received a voicemail on my phone: there was a glitch in the Stratford Inn’s online system. They had no rooms available for that weekend. The woman on the message even went so far as to say she wasn’t sure how we had managed to make a reservation – as though we had miraculously hacked the system or something.

So, after a bit of panic and anger on my part, Rand found us a room at the Plaza – a far better location – it just meant we’d be leaving and returning a day later than planned (plus, we’d get to see some friends in Portland). He managed to calm me down a bit – No need for a Dick Move, he explained. It was a sincere mistake on their part, and they did call us right away.

Okay, fine. Fair enough. They did call promptly, after all, and things had turned out better for us. But then …

We were driving down to Ashland, one day later than we originally planned, when I received a call from the Stratford Inn.

Woman: We had you scheduled to arrive yesterday. I just wanted to confirm that you planned on joining us tonight.

Woman: I have a room reserved for you for three nights, beginning yesterday.

Me: Zuh? No, you cancelled that.

Me: Someone called and cancelled that reservation.

Woman: Oooooo-kay. I have no record of that.

I would like to point out that at this point, it still wasn’t a Dick Move (see? I’m becoming reasonable in my old age!). No. It wasn’t until I spent 10 minutes on the phone with the woman, who wanted to know who specifically left me the message, the details of said message, and whether or not I could provide any proof of cancellation. I had to explain to her that this all occurred a month ago, and ONCE THEY CANCELLED THE RESERVATION, I FIGURED IT WAS CANCELLED. I tried explaining that we had to change our plans and find another hotel at least three times. She didn’t really seem to care.

“Okay,” she said, sounding rather exasperated. “I guess I had better try to get to the bottom of this.” And then she hung up.

I looked over at Rand, awaiting his reaction.

“Dude,” he said, having only heard my half of the conversation. “Dick Move.”

If he says it, it must be true.