Rand and I just got back from London last night, after the sort of trip that has you mentally packing up your apartment and shipping it off to the U.K., because YOU ARE NEVER GOING BACK HOME. But here we are, back in rainy cold Seattle, and I won’t lie, I’m a bit happy about it. I haven’t been home in a long while, and when I stepped into the elevator, I actually forgot what floor we lived on. Which I figure is understandable, since I spent more consecutive nights in our London hotel than I have at our apartment in the last month and a half.

I figure my behavior is a bit more excuseable than Rand’s, who stared at our bureau for a full minute before asking, “Where the hell did that come from?” When I explained we had picked it up on my birthday, he replied, “I have never seen that piece of furniture in my life.”

So clearly, we’re both pretty with it right now. We also both woke up before 6, which kind of makes you feel like you have superpowers. And speaking of superpowers, did anyone notice that I posted every weekday for 2 weeks? It’s not like I was expecting some sort of prize, or something, but …

Sigh. I guess this is one of those hard-work-is-its-own-reward kind of things. I suppose the only thing to do is keep this whole regular blogging schtick up. In that spirit, I wanted to launch right into blogging about London, but I still have a few lingering posts from NYC that I need to get up, so expect all of those this week.

But, perhaps most importantly of all, last night my hubby had dinner with the Secretary General of the United Nations. Which I suppose pales when compared to my night of Project Runway reruns and popcorn-for-dinner. But who’s competing?

Besides, he’s already prettier than me: 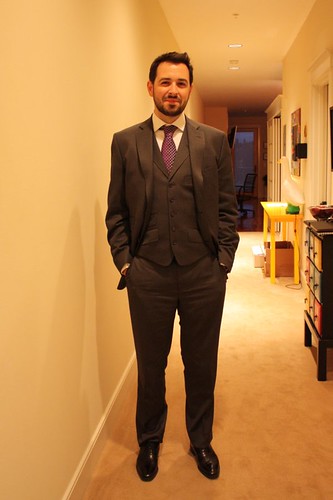 So I guess that’s my prize. Which is fine by me.