I really wanted to write a Dick Move! post about the crazy gal we encountered in NYC’s Meat-Packing District, but in the end I just wanted to toss a sweater over her shoulders, tell her that she was better than this, and threaten to call her mother.

Rand and I were wandering around the west side, trying to stay dry in the torrential rain. Fortunately, even while hiding under the shelter of awnings, there’s stuff to see. That’s the nature of New York. 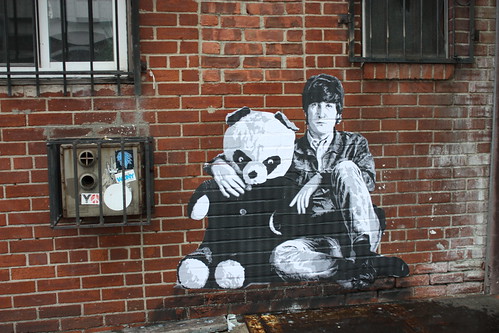 I don't know what this means, but I like it. 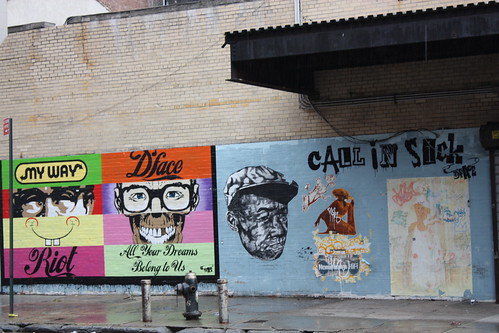 If I had a real job, I would totally call in suck.

I also started taking photos of the outside of one of the bars. Not because it was particularly interesting, but because I often do that to remember exactly where I was in a set of photos. I ended up taking a photo of the outside of the Hogs & Heifers Saloon, and the bartender freaked out. She started yelling at me through the open door.

Me: I’m not. I’m taking photos of the outside.

Me: Not even of the facade? (Note: She was really confused by this comment, and I realized it was probably because she didn’t know what facade meant)

Bartender: Well, you can’t take them of me!

Me: I couldn’t anyway. It’s too dark in there, and I’m not using a flash.

Me: I can’t even take photos of the facade?

Bartender: Just … just not of me … 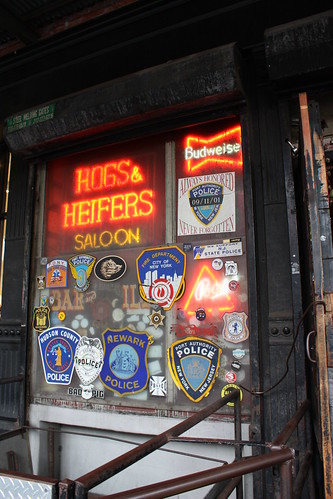 The image in question.

Jumping Jesus on a pogo stick. I kind of wanted to tell her, “Honey, you aren’t that cute,” but decided against it. I felt that weird, bristly anger that comes when people try to enforce rules that aren’t legal. I am on the street, taking a photo of a building that is visible from a public sidewalk, and she starts yelling at me. It would have been a Dick Move, but, well …

Rand and I walked around a little bit, and on the way back, we happened to pass by the door of the saloon again. And there was the same bartender. In a bikini top. Dancing on the bar.While about 4 people stared, rather bored, in her general direction. For the record, there are few things as depressing as a woman compromising herself for an unenthusiastic crowd.

Later, I looked up the bar, and apparently this is their schtick. Some girl will dance on the bar, and she’s occasionally joined by female patrons.

The whole thing was pretty grim. Fortunately, people seem to hate the place. And a visit to their website shows that the place is apparently “under 24-hour video surveillance”. Nice. Because what I love more than anything is a place that encourages drunk women to take off their tops, and then surreptitiously films them doing it.

So perhaps the bar itself deserves a Dick Move. As for the bartender? She needs to wipe the whore off her face, and then go buy a thesaurus.