The Guggenheim and the Cooper-Hewitt Design Museum on New York’s Upper East Side don’t seem to get as much love as other big players in NYC, like the Met and the MOMA. They also don’t have snazzy nicknames (I suspect these two observations are related). Rand and I tried coming up with some, but the best I could muster up for the Cooper-Hewitt was “The Coop”, which sounds like a museum dedicated to eggs (I’m not necessarily saying I have a problem with that, esp. if they included an exhibit on the Cadbury Cream Egg variety). For the Guggenheim, we came up with “Goog”, which, while not incredibly catchy, is far superior to Rand’s other suggestion of “The Hymie.”

The point is, I suggest you show Goog and The Coop some love – they’re generally less crowded than the more popular NYC museums, just as culturally enriching (usually), and you’ll seem like more of a travel bad-ass when you head over there.

And, oh, how we love seeming like travel bad-asses.

Our friend Kirsten joined us. You might remember her as Dharmesh’s “she-might-be-too-awesome-to-exist” wife. But, unlike Santa Claus or the state of Delaware, she actually is real, and knowledgeable and interesting to boot. If you can rope her into going to a museum with you, I highly recommend it. She isn’t afraid to say that she absolutely hates a painting, which is a valuable quality that I find lacking in a lot of museum patrons. 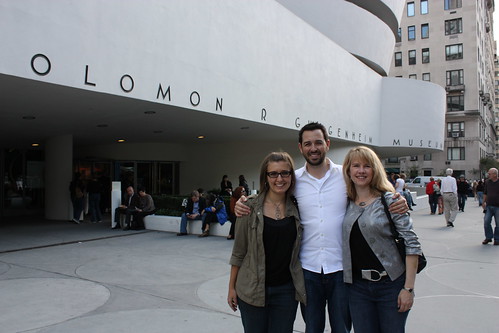 Photographic evidence of Kirsten's hotness. Rand and I fought over who got to put an arm around her. He won. 🙁

Not that there’s a lot to hate at Goog right now. They’ve got a retrospective of Vasily Kandinsky’s work, and if you’re anywhere in the vicinity of New York, I suggest you check it out. It might be that I have an affinity for Russian ex-pats taking refuge in Germany (see Dad, My), but I thought the exhibit was great. Despite having been pooped on several times by life and fate and circumstance, Kandinsky’s work remained upbeat and whimsical. It also serves to put abstract art into perspective for uninformed schlub like me (spoiler: it’s not just a bunch of random circles! There’s meaning in them thar geographic shapes!). I was actually surprised by how much I enjoyed it – and the winding, spiral shape of the museum is perfect for a retrospective exhibit like this one. If you don’t mind a gradual uphill walk, it’s totally worth the trip. 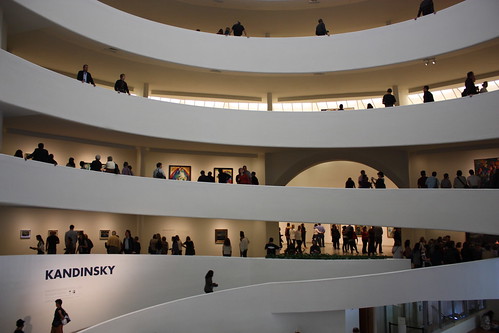 Taking photos is museums is evil. EVIL. But apparently The Goog lets you take pics from the bottom floor. So I did. Just this once.

The Coop was decidedly less interesting. But since it’s undergoing a pretty extensive renovation, admission is free, and, as Rand will confirm, I’ve gone into galleries and watched videos of people vomiting  because admission was free (Ah, Milan. How I miss your avant-guarde art scene. Sort of).

The best part about The Coop, in my humble opinion, wasn’t really the exhibits (which are about using sustainable materials in new, evidently impractical ways) but the museum itself. It’s located in a beautiful old mansion that was once belonged to Andrew Carnegie. The back lawn was once one of the largest private gardens in New York (which, okay, isn’t exactly saying much in terms of size … THAT’S WHAT SHE SAID) and seems like it would be a perfect spot to have lunch. 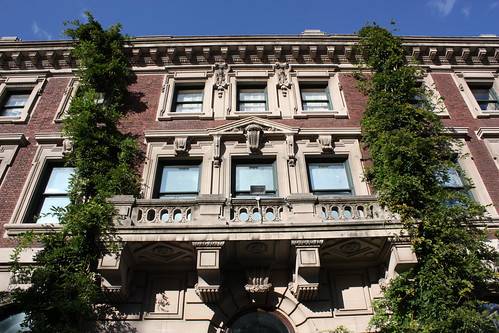 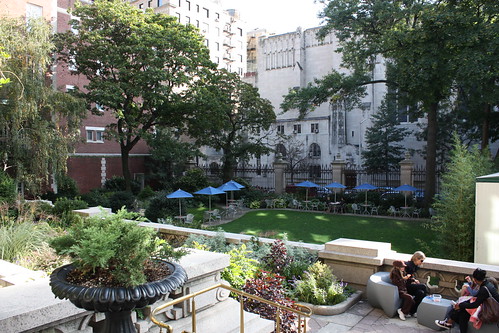 I think my photo-taking scared off the family seen lunching in the corner. Sorry, folks.

Do check out Goog and The Coop if you’re in the area (if anything, because I want those names to catch on, and because “Goog and The Coop” would be a good title for a buddy-cop TV show). And if all that museum-hopping isn’t culturally enriching enough for you, you can walk to Central Park and see this: 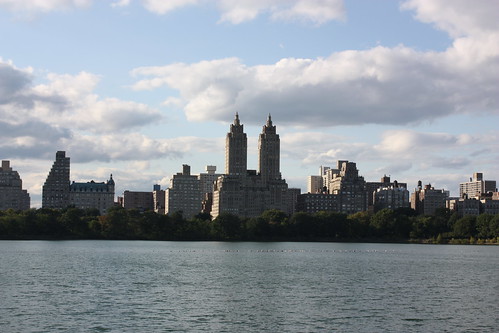 Don’t recognize it? It’s only the building from one of the greatest motion pictures of all time. I speak, of course, of Louis and Dana’s apartment building from Ghostbusters.