This isn’t just about an item that I was convinced I needed – it’s about one that I actually bought. And holy cow, have they changed my life.

Okay, fine – but they’ve changed the way I pack, and that’s a big part of my life. So there.

I first became aware of packing cubes when I went to Italy with the lovely Pinguina in 2008. I had seen them before at luggage stores, but the price kept me away. I figured they fell into the vast category of entirely unnecessary and potentially satanic products: like peep-toe Ugg boots (designed for getting pedicures in cold weather), a yodeling pickle, and anything from the Paris Hilton “clothing” line.  These things were just invented to make you spend your money and question the existence of god, right?

Pinguina had a few packing cubes in which she carried smaller articles of clothing (socks, bras, t-shirts, etc.). And they while they first seemed totally unnecessary, the ease with which she unpacked and repacked her bags, and was able to find exactly what she was looking for without leaving her hotel room and suitcase in shambles had me convinced that I needed them, too.

I bought three of them for a subsequent trip, and I have used them ever since. It was glorious. For a hyper-organizer like myself, there’s nothing better than putting things in little bags BEFORE putting them in your bag. It’s like the Russian nesting dolls for your luggage. Plus, everything fits into your suitcase so easily and symmetrically, you’ll find yourself humming the theme to “Tetris”.

Also, I just realized I managed to squeeze two references to Russian pop culture into one paragraph. Which is bizarre, but nevertheless makes me proud (after all, I’m half Russian. It was bound to come out somewhere).

Of course, the downside to all this is the price. I have three of Eagle Creek’s Pack-It Cube Organizers (because that’s the brand they carried in the store I went to), and they ran me about $12 each. You can find them a little cheaper on  Amazon.com, but not by much. There are also less-expensive options made by ebags and (sigh) Rick Steves. I don’t think there’s a big difference between the brands, so I’d go with cheaper if possible (as long as it’s not Rick Steves). 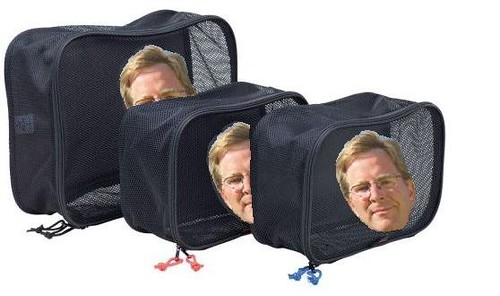 Okay, fine. So Rick Steves' Packing Cubes don't actually have his face on them. I don't know if that's a selling point or not.

Of course, the true test of the awesomeness of the packing cube came from Rand. Every time he leaves for a trip, I ask him if he wants to use one of the cubes, and he emphatically refuses, saying he doesn’t see the point. So for his trip down to California last week, I didn’t even bother offering him use of the cubes. But I found he had taken one, anyway. When I commented on it, he immediately got defensive (for the record, defensive Rand is adorable):

“What? You said I could use them if I wanted to!”

You may not realize it, but this is actually a glowing endorsement, masqueraded as a whine, from someone who travels far more than I do. If Rand can admit he needs a packing cube, you might need one, too.