The Tower of London, and most specifically, its warders, have been in the news a lot lately. In 2007, the first woman, Moira Cameron, was appointed to the post of Yeoman Warder (a.k.a., Beefeater) at the Tower. The warders guide visitors around the Tower, and tend to its ravens (as it’s believed that should the ravens ever leave the Tower, the Tower and the Kingdom will collapse). It’s a fairly prestigious gig, and you get to live on the Tower grounds. All in all, fairly awesome, especially if, like me, you are all for women busting up the glass ceiling.

Unfortunately (there always seems to be an “unfortunately” doesn’t there?) two Beefeaters were recently suspended, and a third is under investigation, for bullying and harassing Yeoman Cameron. Allegations include vandalizing of her locker and uniform, as well as the “defacing” of her Wikipedia page. That latter bit fascinated me, because it is, as my friend Rachel would say, “a first-world problem of the now.”

The point is, the whole thing sucks, and I feel for Yeoman Cameron, and wouldn’t mind giving those three Beefeaters a kick in the sirlions. But all of this sexist harrasment aside, the Tower of London is awesome, and I sincerely suggest a visit. I know, I know – it’s touristy and crowded, but that doesn’t mean you shouldn’t go.

Especially if you get one of the awesome Beefeaters as guide. The kind that you hope, given how cool and sweet he was, was not part of any of this harrasment crap. 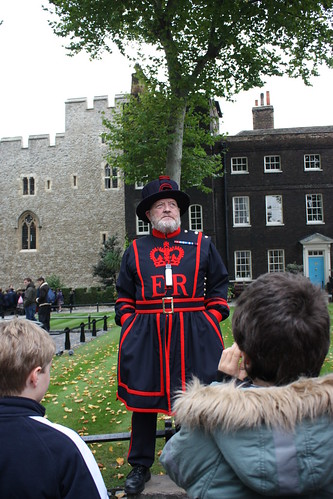 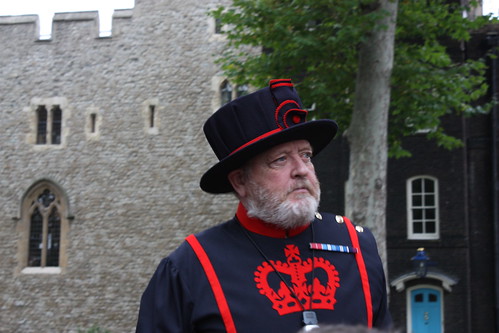 I looked through some of the photos related to the whole harrassment scandal, and it looks like the Beefeater who gave my group a tour was looking pleasant and standing only a few feet away from Yeoman Cameron in a lot of the pics, something that I’d like to think you wouldn’t do if you were going to harass her. So unless I have concrete evidence to the contrary, I’m going to assume it wasn’t him.

Because, man, was he a good tour guide. He was funny, his voice was booming, and he had that inexplicable charm that can only be found amongst people who add superfluous “u”s to words like “colour” or “humour”. The group was huge, but since we were all outside, it didn’t seem to matter all that much.

He took us past The Bloody Tower … 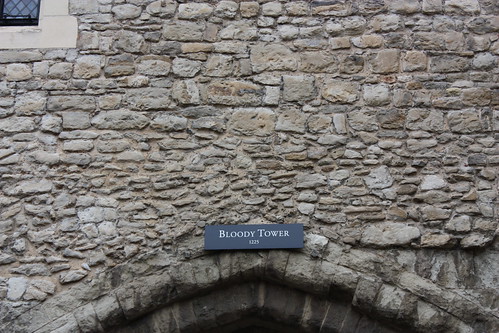 I suspect it was originally just called "The Tower", but someone had a potty mouth.

He told us about the six ravens who live in the Tower of London, and the two that they have on reserve. Because, you know, that’s how you preserve a monarchy: 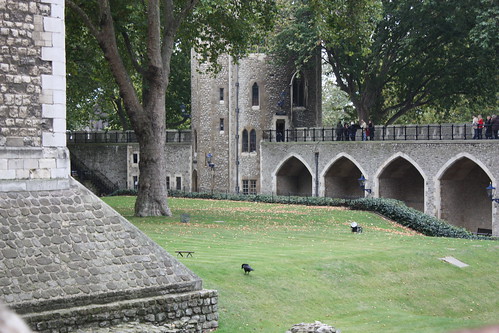 And he told us, in a booming baritone, about all the ghastly stories associated with The White Tower, which is supposedly haunted. The story of the murdered princes, and the tale of Anne Boleyn‘s disembodied head slowly gazing across the crowd as the executioner held it (her?) up. Those of you who know me know that I love stuff like that. Especially as it was approaching Halloween. 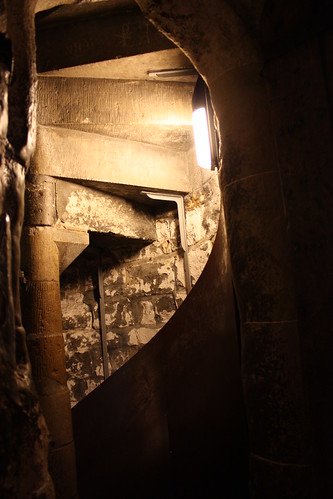 A photo I snuck of the inside of The White Tower, which I found suitably spooky. 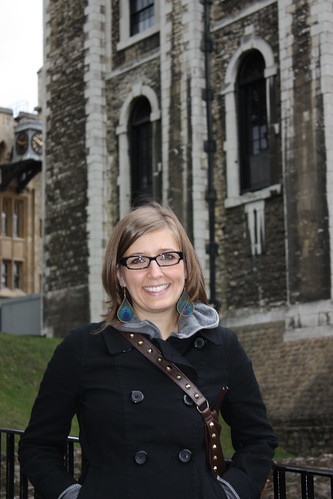 And here I am expressing an undue degree of joviality at the site of many murders and beheadings. God, forgive me for loving history so.

There was also an exhibit called “Dressed to Kill” which featured Henry the VIII’s armor. The most delightful part about it was the delicate phrasing of some of the signs: Notice the evolution of Henry’s armour to accomodate his changing silhouette.

I suppose that’s a lot more polite than, “Look what we had to make because fatty couldn’t lay off the bread pudding.”

I stood in line for the Crown jewels (heh heh heh), which is both fascinating and appalling and totally worth it. I was lucky enough to be next to an amazingly-well-informed woman and her four adorable, well-behaved little moppets. And no, there’s not a bit of sarcasm there. It was awesome. I kept eavesdropping:

Mummy: Yes, my darling! And what else do we call him?

Moppets (in unison): Richard the Lionhearted!

I don’t know if that sort of thing can be genetically engineered, or what, but the only way I’m having kids is if they’re English. It’s like Harry Potter, but real. And you know you totally want a Harry-Potter-baby. I was totally smitten, and thanked the gods I wasn’t a 20-something man, which might have made the whole thing a bit creepy, as I was kind of following them. I saw them again as they left the castle, marching alongside the guards: 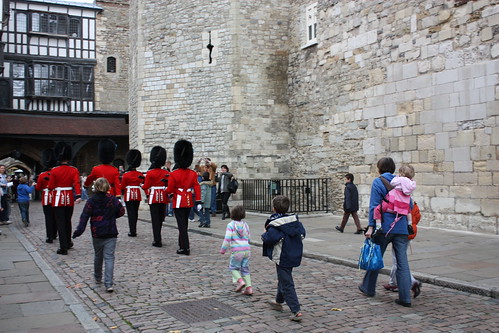 They marched like they belonged there. It was pretty much the most awesome thing, ever.

I reminded myself that if I had children they would probably not be that cute or well-informed. I’d probably have an asshole child like the one that came over and scratched up my couch that one time. That thought quickly made my uterus stop aching, and enabled me to appreciate the views from the walkway near where Sir Walter Raleigh was imprisoned. 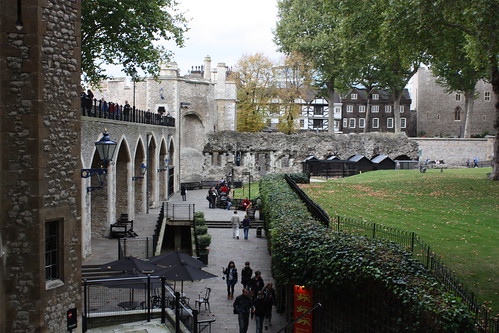 I like how Sir Walter was "imprisoned" in a place far nicer than anywhere I've lived. The walkway is at left. 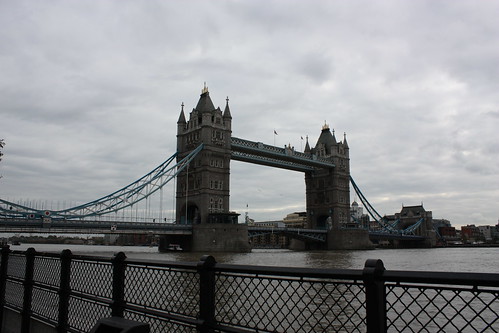 From the walkway you get a great view of Tower Bridge, which I suppose should have been obvious, but I was nevertheless pleasantly surprised.

But, perhaps even better than that, is when you leave the Tower and walk along the promenade near the water. It’s here that you can gorge on fresh oysters and mulled wine, and take surreptitious photos of huge groups of Japanese teenagers, every single one of whom is giving the peace sign. 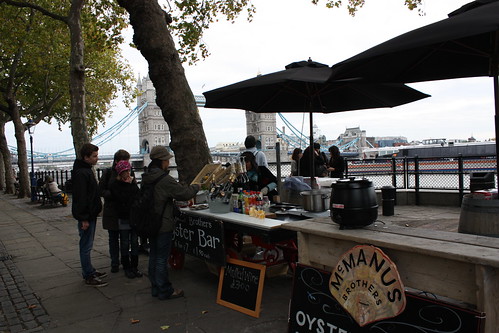 I was tempted, but the idea of finding my way back to Tottenham Square while drunk on warm booze persuaded me against it. 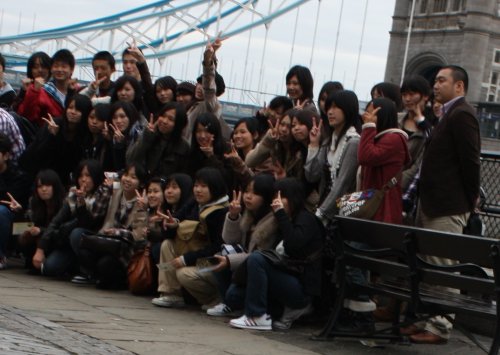 "Damn it, we have to take one more. SOMEBODY wasn't flashing the peace sign."

I recommend visiting the Tower on a grey and blustery day (of which there are no shortage in London during the fall) to mitigate crowds, and buying your tickets ahead of time. Seriously, the queues (Oh, you wacky English! Why not just say line?) are absolutely insane. It took me 20 minutes to purchase a ticket at the main entrance, when I could have gotten it at any of those random ticketing kiosks I saw throughout town (though I probably wouldn’t recommend that practice outside of the U.K.) or purchased it online. But do go. Chauvanist Yeoman and scores of tourists aside, it’s defnitely worth a visit.