There are times when I miss having a nine-to-five job. Those moments are fleeting – like those rare occassions during summer vacation when you begin to long for school. They vanish almost as soon as they appear, as you tell yourself to enjoy the now, because this seemingly endless vacation of staying up late and eating microwave popcorn for dinner can’t last forever.

More than anything, though, I miss the people I worked with. I still see a lot of them semi-regularly, but it will never be the way it was when were crammed into our offices at Cranium: deliriously trying to think up taglines, hacking chocolate Santas to bits with kitchen knives and eating the carnage, rearranging the magnetic letters on the fridge to prophesize our own company’s doom.

The other day, I missed it so acutely, it made my chest hurt.

When I found out I was going to be in Chicago, I asked Angela, my old boss, for some tips. She used to live there, and told me where to go and what to see. And before I left to see her old stomping ground, I decided on one more thing: I’d try to see Chicago the way Angela sees the world.

So I dressed up. I wore sweater dresses and boots (like Angela always did, even if it was frigid out) and walked through the frozen streets of Chicago confidently, feeling elegant. I smiled brightly to strangers and engaged them in conversations. I made friends. I cracked jokes. I cursed less. I tried not to get frustrated with people, because Angela’s reserve of patience seems bottomless.

It was awesome. It was also difficult. Being Angela is no easy task. But Istill highly recommend it, even if you can only manage it for a little while.

While in Chicago, I was lucky enough to have lunch with another former Craniac. Laura was our occasionally blonde, sometimes red-headed, and for while even brunette, capable-of-anything office manager. When Cranium shut its doors, Laura was sporting a sizeable baby bump. She moved to Chicago a year ago on account of her husband’s job, and she and her son, Stu, joined Rand and I at the Frontera Grill, which we all had been dying to try.

It’s funny, because I think that during our time at Cranium, Laura and I had only eaten lunch together a few times, and usually with a group. But here we were, she with her son, and I with my husband, at restaurant thousands of miles from where we met. Travel is a funny thing.

As for the Frontera Grill, the food was pretty damn good. If you choose to go, I recommend making a reservation, and shooting for lunch. We did, and were seating right away, but it took an hour to get our food. I will say Bayless’ mole is very, very good, but we had all, in our experiences, had better. For Rand and me, it was at La Carta de Oaxaca in Seattle, and for Laura it was at another spot in Chicago. Stu, I can only assume, agreed with his mother. 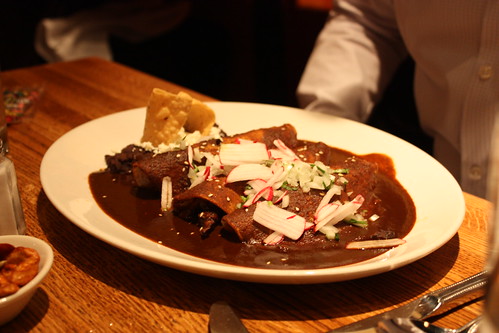 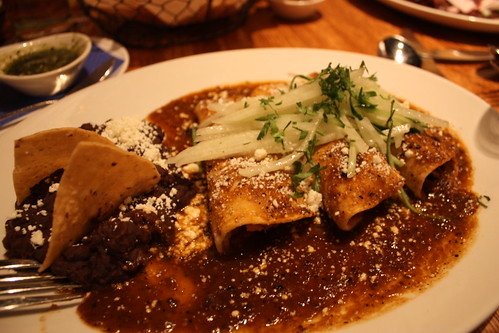 I got the Tuesday Special: Goat mole enchiladas, I think.

Stu didn’t seem too intrigued with his taquitos (though he did offer one of his goldfish to a pretty waitress, and took another’s hand), so Laura had the waiter box them up and put them in a bag. That really peaked Stu’s interest. Later, she sent me this … 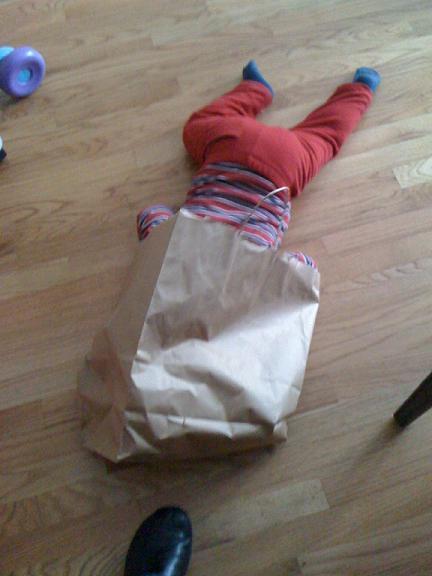 This is awesome for so many reasons, not the least of which is that its anonymity meets Philip's "don't post photos of kids who aren't yours on the internet" criteria.

Just another magical day, made possible in part by the folks at Cranium.