The first time I landed in LAX, I was 14. I was spending a few days with my brother, who was a freshman in college at USC. I remember gawking at the layer of smog and the sprawling, bleached-out landscape. When I got off the plane, my brother, for possibly the first and last time in his life, looked happy to see me.

“This place is a shithole,” were the first words out of my mouth.

And I suppose for him, it really was. He was away from home for the first time, living in L.A., and trying, truly trying, to become a movie star.

I suppose that last bit is still true for him and most people who move to Los Angeles. And while there’s something quietly sobering about a town of aspiring something-or-others and the realization that it just can’t happen for all of them, there’s something weirdly hopeful about it, too. A whole town full of starry-eyed dreamers and the idea that maybe, just maybe, one of them will make it.

Strangely enough, it almost leaves me feeling … left out. L.A. isn’t my world. I see movies weeks after they come out, or not at all. I don’t understand the cultural relevance of Kim Kardashian, nor do I care to. And when I think, I could have done a better job than she did in that movie, it serves more to illustrate how bad or miscast an actress was, rather than belie any hidden desire to be a movie star or make out with Robert Downey, Jr.

Okay, fine. There’s one line in that previous paragraph that’s an outright lie. You find it.

The point is, L.A. is a strange and foreign place to me. While waiting for a valet to grab our car outside a sushi restaurant near Beverly Hills, we overheard some woman’s phone conversation. It was, as far as we could tell, all about Michael Cera. She said his name, I kid you not, at least a dozen times in the two minutes we were there. And it was at that moment that I realized: she wanted us to overhear. A few times, she was actually looking directly at is, blathering on and on about Michael Cera. After a while, the name ceased to even make sense – it was just noise.

As Rand noted, in L.A., it’s all about who you know. And the woman outside the sushi shop apparently knew Michael Cera. Or, at least, she wanted us to think she did.

I desperately wanted to explain to her that a show wasn’t necessary: we’re from Seattle.  Our cult of celebrity died with Kurt, god rest his troubled soul. Our billionaires look like paupers.  One time, I saw Dave Matthews at the QFC in Wallingford, and my first thought was, “Why do I recognize that homeless man?”

Of course, I nevertheless took this photo of a man we saw driving alongside us on the highway towards Los Angeles. At the time, I thought it was Wayne Knight, a.k.a. … Newman. 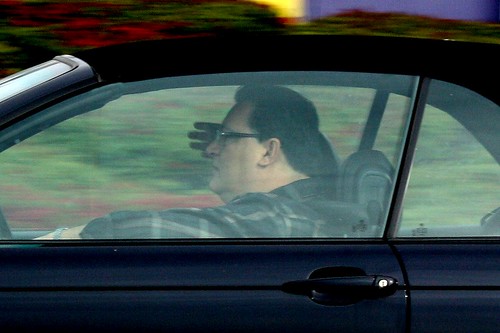 He's clearly talking to someone. I suspect he's saying, "... Jerry."

Now I think it’s just a fat dude with glasses. But then again, so is Wayne Knight.

I guess in L.A., you never know when you might be driving alongside a movie-star, or when the girl who starred in a crappy horror movie with you turns out to be Leighton Meester. That’s the world in which my brother lives. A world in which, on a good day, you’re devoured by aliens, and paid for your troubles: 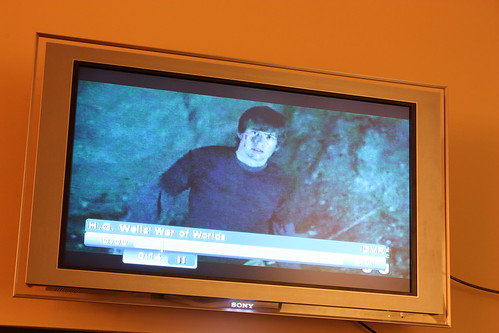 My brother, right before he gets eaten. He dies or is otherwise put out of comission in most of his movies.

I wish him luck in his endeavors, since I’m fairly sure luck is most of what it takes to be famous. He’s moving back to L.A. at the end of the month, after a long hiatus in Hong Kong with his wife, during which he tried his hand at the theater scene, and had to remember lines in both English and Cantonese.

I hope, for his sake, all of it’s worth it.  That he still finds L.A. as great and full of promise as he once did. And who knows? Maybe one day some girl will be standing outside a sushi restaurant, blah-blah-blahing on her cell phone about Edward DeRuiter so many times that anyone within ear-shot will want to slap her.

One can only hope.