The other day we were hanging out with some friends – some American, some not, and we realized that none of us were really sure what countries are included in the phrase “United Kingdom”. Nor did we know what’s a part of “Great Britain.” England, we pretty much figured out (they’re those wussy guys who tried to tax us, right?).

The point is, along with which colors indicates positive and negative charges on a pair of jumper cables, these are things that we all should probably know, but don’t (For the record, red is positive and black is negative). I figured it was best to set the record straight (for myself and others) before we actually head out Glasgow and London next week. So while our British reader (Hi, Will!) sits back and cringes, the rest of you should pay attention, because we might all learn something.

There’s some amazing graphics and explanations on this site. I’ve also stolen one of their diagrams, which I found immensely helpful (via Mandy Barrow’s ProjectBritain.com):

This actually makes a lot of sense now.

Britain: to make matters even more complicated, people occassionally just say “Britain”, which actually refers to only England and Wales (and not Scotland). Though some people might mean to include Scotland when they refer to Britian, they’d be incorrect. The names originate from Roman times – when the area that is now England and Wales made up the providence of “Britannia” (since modern Scotland was never conquered, it’s not included in what is now “Britain”). This also leads to some confusion when people say “British” – the term should only apply to things or people hailing from England and Wales. Fortunately, most people are very specific, and will actually say, “I’m English” or “I’m Welsh.”

England: a country that is part of the United Kingdom, located on the island of Great Britain. It is bordered by the coutry of Scotland to the north, and the coutry of Wales to the west.

Wales: A country that lies to the west of England, on the west coast of the island of Great Britain. It is a pricipality (and not a kingdom, like England). This means that it is reigned over by a prince – in this case, not surprisingly, the Prince of Wales (which is a courtesy title given to the heir apparent to the British throne – I assume because England occupied Wales for long). Also, I think hobbits are originally from here.

Scotland: Part of the United Kingdom, Scotland is a country bordered by England to the south, and makes up the northernmost end of the island of Great Britain (holy crap. I can’t believe I just wrote that. I feel like I learned something). This is a photo of some famous Scots: 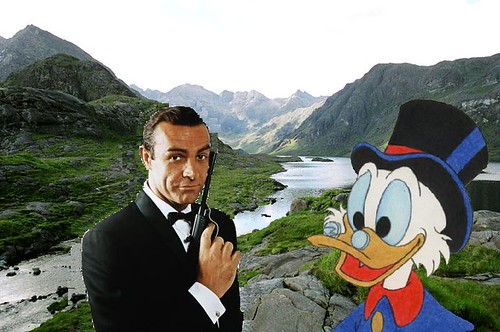 Not pictured: The Highlander

Northern Ireland: Not part of the island of Great Britain (it’s separate from it by the Irish Sea), this country IS part of the United Kingdom. It is bordered by The Republic of Ireland to the Southwest. Predominently Protestant, though roughly 25% of the population here is Catholic and regard the British as an occupying power.

Isle of Man: I was going to skip covering the Isle of Man entirely, but I didn’t want to risk offending the 14 people who live there (okay, fine – apparently the real population is 80k. But still). I actually met a guy from the Isle of Man once, and smiled, nodding, when he told me where he was from, but he gave me a look that said, “You have no idea, do you, American girl? No effing clue.” But now I know: The Isle of Man is a tiny island between the islands of Great Britain and Ireland. It isn’t actually part of the U.K. (or the E.U., for that matter), but the U.K. is kind of oversees it – hence it is called a British Crown Dependency. (One more interesting tidbit from Will: If you hear locals here referring to “the mainland”, they mean The Isle of Man itself, and NOT Great Britain. Because, compared to some of the tinier surrounding islands around it, the Isle of Man, is, well, mainland).

Rand and I had a long discussion about whether or not the Isle of Man is actually its own country (since, for nationality purposes, it’s part of the U.K.). Rand said it was, but I was unsure, since it wasn’t independent. Apparently, it is its own country, but not an independent one.

There’s also an interesting discussion on nationalities and cultural identity here. Be warned, the American who submits the question that gets the conversation going is clearly a moron. And frankly, after reading it, I’m still not sure what “British” refers to (it’s either people from Britain or people from Great Britain. Essentially, “Are the Scots also Brits?” is the question that I can’t seem to answer, and neither can this site.)

Anywho, I really proud to say that, after writing this post, I might have learned something. Of course, that didn’t stop me from having this exchange with my hubby last night:

Me: Honey, are we going to Northern Ireland or The Republic of Ireland? Because one is primarily Catholic, and one is under British rule.

Rand: We’re not going to Ireland – we’re going to Scotland.

P.S. – A big thanks to Will, who offered some feedback on this post. And no thanks at all to Jon, who for some reason wasn’t checking his email at 3 a.m. GMT. For shame.)