So much, in fact, that the hubby and I comforted ourselves when something was closed or we didn’t have time to see it, by saying, “Don’t worry. It’s not like we won’t be back.”

We used Rand’s business trip to San Diego as a jumping off point for the NOLA wedding we were heading to (as did, coincidentally, the Gastrognome. The world is a small place). We arrived late in the evening, and booked it off our American Airlines flight, as the gentleman sitting across from us (who proceeded to down 4 Bud Lights each during the flight) were giving me the look  of death. As in, they were trying to pick a fight with one or both of us. It was weird and scary, and I’ve never left a plane faster in my life.

Our cab driver from the airport to the hotel was an interesting little fellow. Speaking with a thick-accent of undetermined origin (it was not anything regional, I’m sure) he noted points-of-interest, the plastic beads hanging from his rear-view mirror swinging as he drove. As we crossed over a causeway, he explained that it was one of the highest roads in the city, and news footage had been shown of people swimming to it for safety.

He pointed out buildings, noting the point, stories up, where the water had reached, talked about the chaos and the destruction and the dead. It seemed surreal, something that had happened hundreds of years ago. Not in our lifetimes, anyway.

I remember the news surrounding Katrina, remember people handing off their children to aid workers in helicopters, and then quietly hoping the next one would arrive so they, too, could be airlifted out. I remember Kanye saying that George Bush didn’t care about black people, how the president defended FIFA, and how my relatives from other countries came up and asked me if we had left all the people of New Orleans for dead.

As we drove to our fancy hotel, and I wondered, having never seen New Orleans pre-Katrina, what it would be like now.

I don’t know what’s to blame for the things I saw. Maybe it was the Superbowl win. Maybe it’s the inherent love we all have for our hometowns, distilled. Maybe it’s the unstoppable human spirit, or whatever (which, I saw unstoppably puking, like, everywhere). The point is, New Orleans was alive. Vibrant and effervescent, and a little insane and seedy, sure, but wonderful and charming and breathing.

I suggest you put down whatever you are doing and go, immediately.

We stayed at the Roosevelt Hotel, owned by the Waldorf Astoria, and just a few blocks away from Bourbon Street. It was gorgeous. 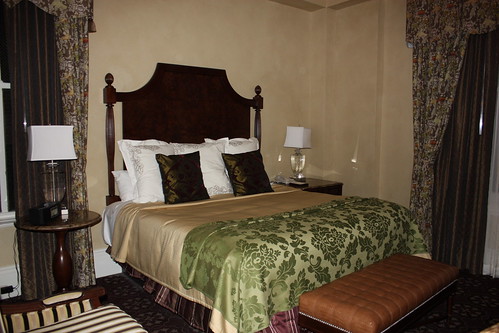 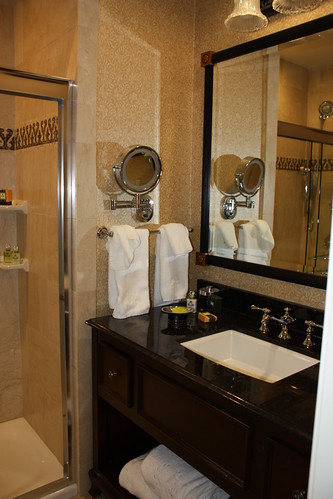 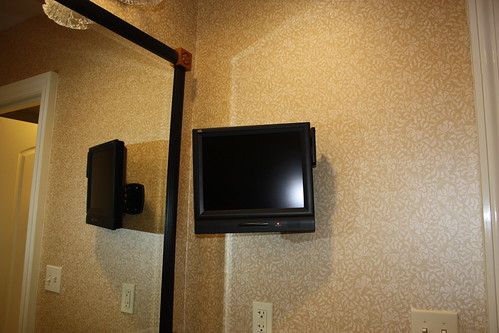 And since we arrived at midnight-ish, on a Saturday, Rand insisted we check out Bourbon street. As we walked there, a bride (or, at least, I assume she was a bride, as she was wearing a wedding dress) ran past with her entourage in tow, screaming and laughing. Things were about to get very, very interesting.

The next morning, I would try to explain to everyone what, exactly, it was like.

“I saw things. Things you can’t un-see,” was all I could muster.

Imagine a frat-party. With a bit of Vegas tossed in. Add some Disneyland and nudity for good measure. That, as far as I can tell, is Bourbon Street. 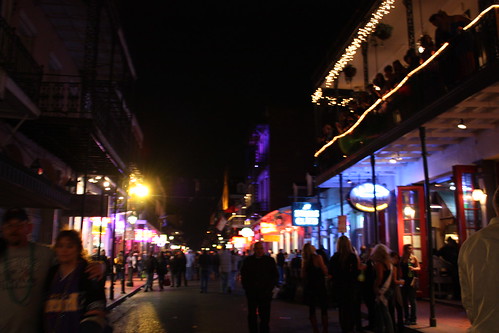 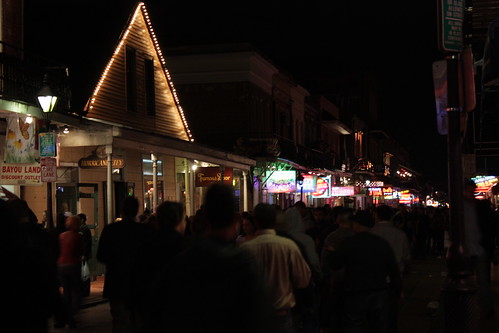 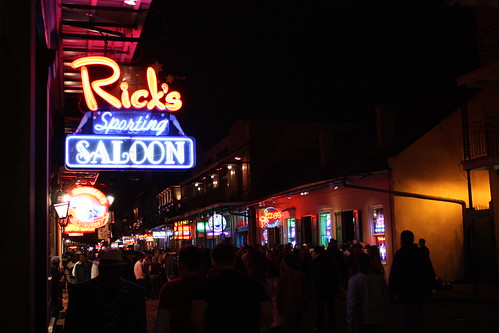 There are balconies all along Bourbon Street, overloaded with drunk people. For obvious reasons, you should not stand directly under them. 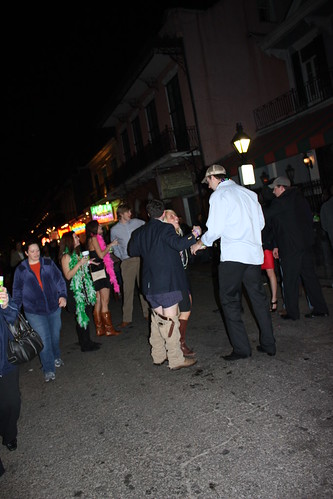 Nudity, as promised. Moments before he was on the floor with his pants around his ankles. Good times were had by all. 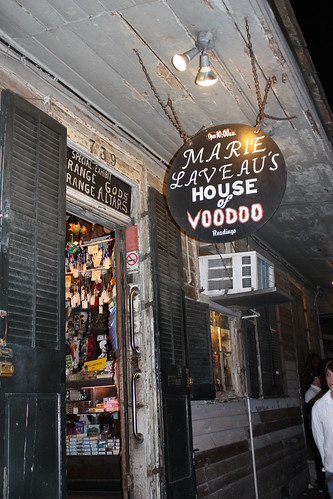 A House of Voodoo. Who knew?

The police were all on horseback. They were amazingly agile, even pinning one extremely drunk and hostile guy against the wall. 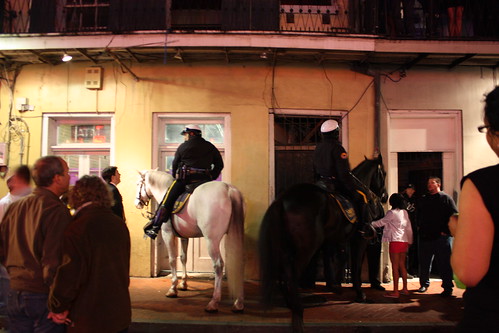 They managed to handcuff him from their saddles.

And one, in particular, was gorgeous. He looked like a young Lando Calrissian. This did not go unnoticed by the group of ladies clustered around him. One woman pointed to her chest, then traced a heart in the air with her fingers, and pointed to him, eliciting this response: 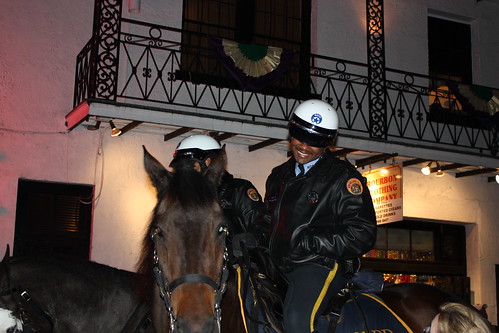 Sadly, this was the best photo I got of him.

Rand decided that he was peckish, so we popped into the only grocery store we could find, a tiny corner market off a side street that showed no signs of closing anytime soon. While we opted for cherry tomatoes and cheese and crackers, I was amazed by some of the stuff on the shelves. 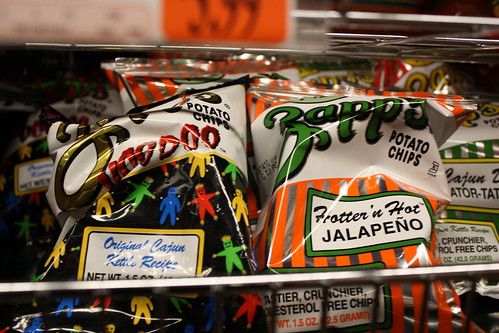 Rand insisted on trying, and was subsequently disappointed with, the Cajun potato chips. 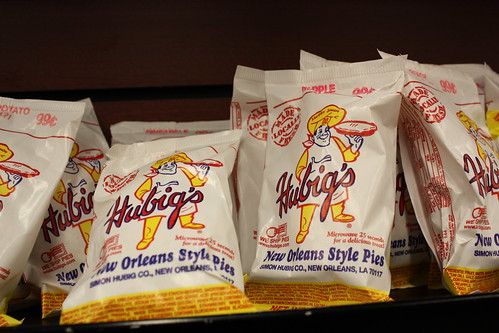 I suppose there's something amusing about people drinking Hurricanes throughout New Orleans. 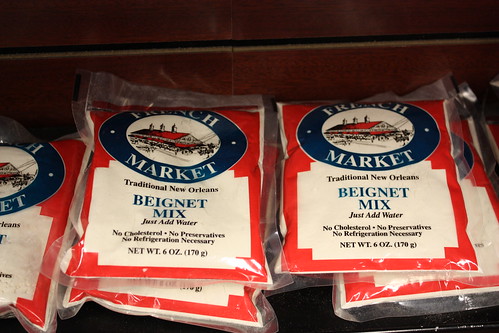 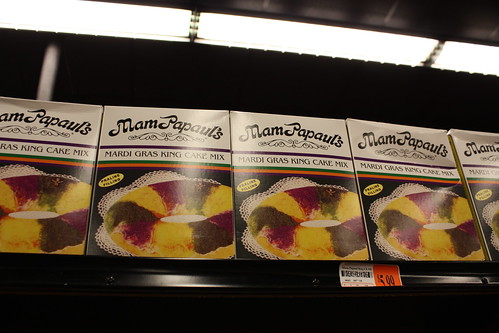 I've never had King Cake, but it always looks to me like it was decorated by kindergarteners.

In total, we were on Bourbon Street for about 45 minutes. We saw numerous people vomiting, making out, getting naked, trying to pick fights (Note to the preppy frat boys of the world: please stop “fronting”. You look like idiots), making friends, carrying one another home, and, of course, professing undying love … to policemen on horseback.

Like I said before: New Orleans, I just may love you.

(Tomorrow: 24 hours in New Orleans and, gasp, the Wedding!)