I realize that this is the second post in a week documenting family strife, but I feel it tackles a universal issue that must be addressed. Mainly, what is it about visiting family that can drive an otherwise reasonably sane person absolutely batty?

I have no problem with being insulted. But I caution those who do it, because I don’t really suspect they know what they’re in for. Because years of being taunted and teased by family members has resulted in a sharp tongue and no hesitation in using it. I’m unexpectedly, and often undeservedly, mean to people.

It’s actually something I’m proud of.

But something, something about visiting family renders all of my powers useless. They are, without hyperbole, the antidote to any quips I might come up with, the kryptonite to any clever retort I may have.

And. Yet. I KEEP VISITING THESE PEOPLE.

I love him. I dare say that, on god’s green earth, he might be one of the people I love more than anyone else. But in the event of a zombie apocalypse, I would, without hesitation, save my husband (first and foremost), numerous family members, several of my friends, my favorite waitress, my yoga instructor, and possibly my mailman before I would save my dear brother.

Because while I love him, I do not like him. Nor do I particularly like visiting him. And yet I do, over and over again because (and here’s where things get absolutely insane) even though he’s a pain in the ass and makes me miserable, I still miss him.

Please, please tell me that other people experience this same level of insanity. Let me know that I’m not alone, folks.

Usually, I try to expedite step 6 so we can get straight to step 8 (no, I’m not kidding. I just start erupting at him the minute he says anything half-assed). Most recently, this occurred on our return from New Orleans. Due to some ticketing madness, and the fact that the only way we could get to the wedding was by leaving directly from San Diego, we had an extra night in California before returning back to Seattle. My Auntie P. and my mom decided to go to town, cooking a huge meal for us.

Most of the meal was pleasant. And my cousin and I got to talking about something (I can’t remember what) and as I was relaying to him an article I had read on god-knows-what, my brother interrupted to say, “Your hair makes you look like a fucking angler fish.”

Now, this is in reference to the piece of hair that (I like to to think, at least) falls rather nicely across my cheek whenever I have a shorter cut. And while I realize that what he said wasn’t that bad (especially in relation to the catalog of insults he’s racked up over the years), this is the first time I’ve seen my brother since my wedding, and he’s choosing to be a dick. Not to mention that there’s something about family members’ comments that can cut you to the bone.

And don’t forget the cleverness kryptonite.

I had a ton  of replies that were lost in their office:

“You’ve got to be kidding me, right? You look like a blond Rob Blagojevich.”

“Please explain to me the mechanism by which your hair looks parched, but your skin looks greasy.”

“Oh, yeah? Well, the Jerk Store called, and THEY’RE RUNNING OUT OF YOU.“

Of course, none of that happened. I simply got up, put my dish in the sink, and went upstairs. Rand followed me. And as I lay there, feeling like I was 9-years-old again, I could hear my family talking. Mainly my mother telling my brother to go up and apologize, and him coming up with some excuse not to.

After a half hour, I asked Rand if we should go back down.

“Probably,” he said. “After all, we came down here to see them.”

GAH! This is the worst part about any family trip: when they drive you nuts, you realize that you have to bite your lip and go visit them, because you paid a lot of money and traveled a long way to visit their stupid ungrateful insulting asses. So we headed back down.

Later, my brother sat at the dinner table, and noted that one of his nose hairs was way longer than the others. And insisted his wife pull it out. AT THE DINNER TABLE.

Sigh. And they wonder why my husband prefers a hotel.

The worst part? This ridiculously, disgusting, I’m-making-a-pariah-out-of-myself display of nose hairiness? Totally for my benefit. In some weird way, it was my brother apologizing. Something to the effect of, “Look! I’m being gross! Isn’t that funny? Doesn’t that make my insults count for less?”

Look, I’m not saying it make sense, but it’s the best I’m going to get. 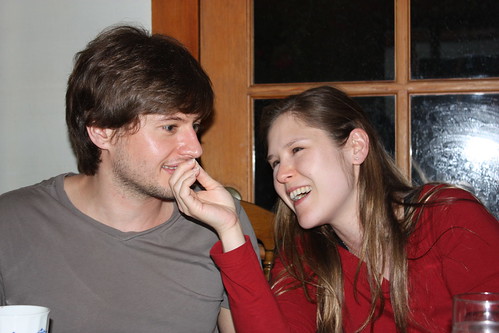 Now, off to book that hotel.