Portland seems like a lifetime away, though we were only there a few weeks ago. Rand had a conference, and I popped down with him, because I love Portland, and it’s just so damn close to Seattle (a three-hour-drive) that I couldn’t think of a legtimate reason for staying at home.

Besides, there’s just so much damn crazy that happens on the stretch of I-5 between Seattle and Portland. Last time, we saw someone who had decorated their mini-van in homage to the Jonas Brothers for whatever reason. Honestly, if you asked me to turn my car into a shrine for any of the following, I would be game: Indiana Jones, movie-theater popcorn (I love popcorn), the musical stylings of William Shatner, and/or comfortable footwear.

But the Jonas Brothers? What. The. Hell. I suppose, though, it’s about as legitimate as this guy, who turned his vehicle into a billboard for, well, I don’t know what. 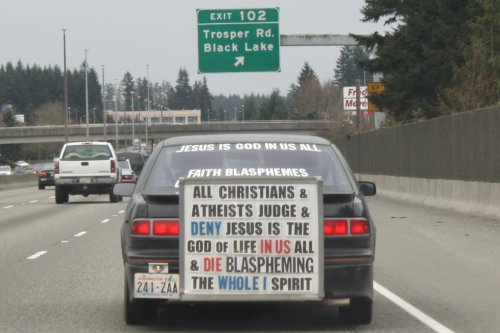 I read this four times and still have no idea what it means.

The huge sign affixed to the back of his car reads: “All Christians & Atheists judge and deny Jesus is the god of life in us all & die blaspheming the whole I spirit.”

I dare anyone to make less sense.

Though it sounds like the Fascist Farmer would take that bet. This guy owns two billboards, one facing north and one facing south, along I-5 between exits 73 and 72 near Centralia, WA. He usually puts up whatever crazy has entered his brain at that particular moment. This time, he had up this gem, which is equal parts cryptic and moronic: 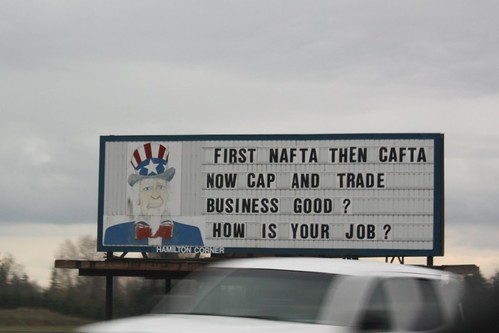 I guess it's better than the time he went off about Obama's birth certificate.

In case the image breaks, the billboard reads: “First NAFTA, then CAFTA / Now cap and trade / business good?/ how is your job?”

I … yeah. At least it makes more sense that the back … 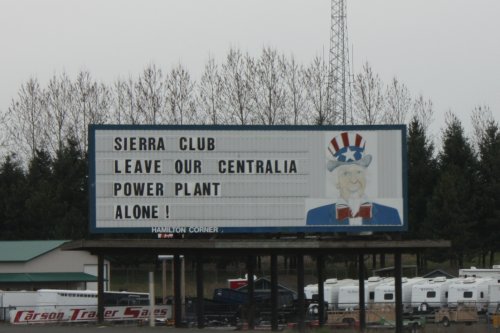 It reads, “Sierra Club leave our Centralia Power Plant alone.” I do so love theater of the absurd. And all this, before we’ve even left the state of Washington!

Despite an incredibly mild winter, Portland decided to become freezing cold for the few days that we were down there. So, like any reasonable Northwesterner, I took this as a cue to eat outside. The Portland food carts, located at SW 9th and Alder, gave me plenty to choose from. 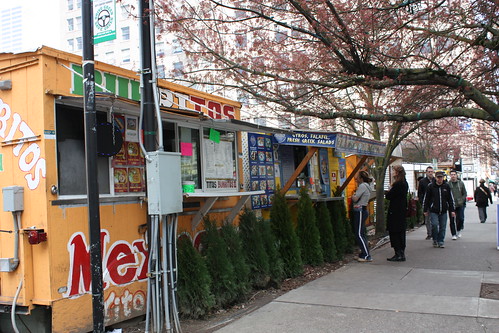 They're usually open every weekday from about 11 until 3.

I usually go for the cart that has the longest line, since I figure that’s a good sign. But on this day, I heard a woman telling her friend how awesome the food was at Ziba’s Pitas, a virtually ignored little cart at the end of the street, and I got in line behind them. 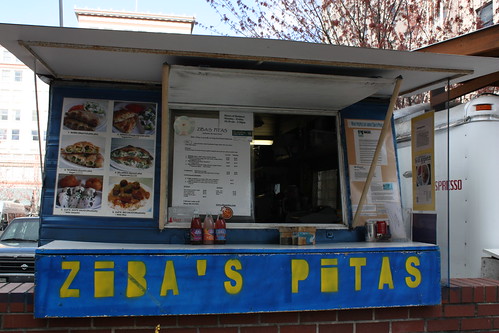 Her friend was Macedonian, and he told me the food Ziba served was pretty authentic. It was also awesome. I got the burek, a pita filled with spiced beef. A la carte, it costs just under $5, but I decided to splurge and get the platter, which comes two sauces on the side – cucumber yogurt and red pepper – rounding the price up to a whopping $6. 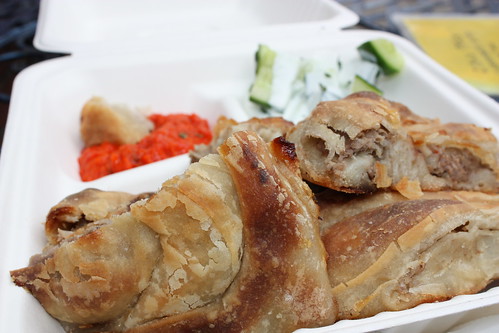 Mmmm ... that burek was so good, I wish I was eating it right now.

Ziba, who was incredibly sweet (when I ordered a bottle of water, of which she had sold out, she tried to give me a free soda), advised me to eat the burek with my hands, since using a fork and knife just causes the flaky, buttery pastry to fall apart. I did as I was told, wolfed down half the burek in the cold, and brought the rest to Rand, who was just across the street at our hotel.

Me: Have you eaten?

Me: Doesn’t matter. Try this, anyway.

Rand: But I’m not hungry.

Me: Doesn’t matter. Try this.

Rand: (taking a bite) … holy crap. This is awesome.

Me: I know. It took all my willpower to bring it to you and not eat it all.

Me: Shut up and give me the rest.

That’s more or less how it happened.

I also had a lot of free time on my hands, since Rand was preoccupied with work.  Since downtown Portland has a variety of cool shops and no sales tax, I spent some time roaming around, shopping, and finding nothing (note: The Goodwill on 10th is obscenely overpriced. I’m all for shopping at the Goodwill,  but used shoes should never cost $50). Fortunately, we met up later with our friend Laura and her husband Chris, who had much more success on the Portland shopping front. They even bought us these, which are both practical and hygienic: 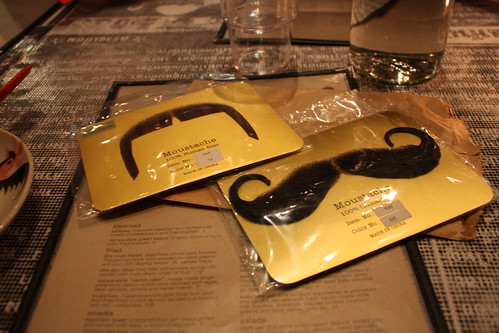 Though honestly, I can grow my own.

The tag says they are made from 100% human hair. I’m sure that’s a key selling point. I bet a lot of people who are about to buy a fake moustache leave it when they find out  it’s acrylic. I know I would. 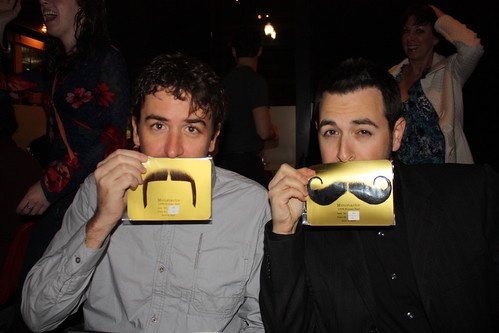 Laura and Chris joined us for dinner at Ping, which was recommended to us by some friends who are Portland locals (always listen to the locals). It’s a Chinese-tapas restaurant, and we found it to be awesome (though we mis-ordered, and ended up getting waaay too many meat skewers, and not enough noodles. Sorry, Laura. I owe you some ramen). 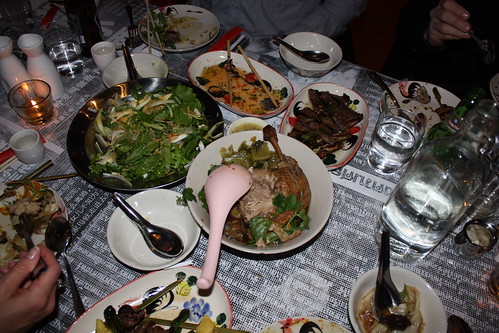 Notice the lack of noodles.

Also, apparently not everyone likes chicken hearts as much as we. Behold: 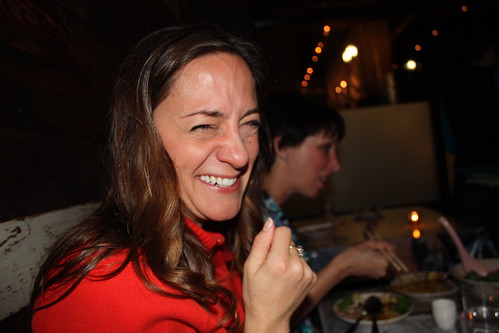 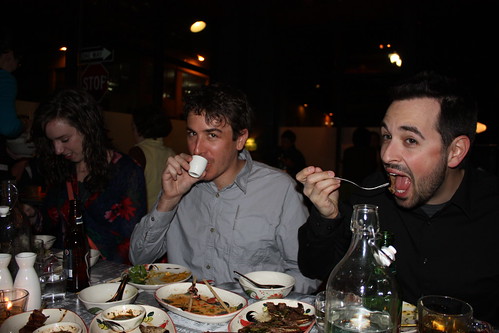 It was still a nice time, though. I recommend the pork collar.

Afterwards, we roamed around in the freezing cold looking for dessert. 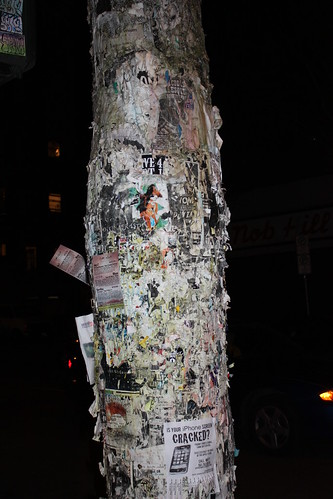 "Hey, that tree has bark made of shitty bands." - Chris

For the record, Rand and Laura are really similar. They have this happy-go-lucky, let’s-run-around-town attitude that I adore. Except when it’s cold. They also insist on looking up everything on their phone. Which I normally wouldn’t mind … except when it’s cold. So, in the process, we got hopelessly lost. 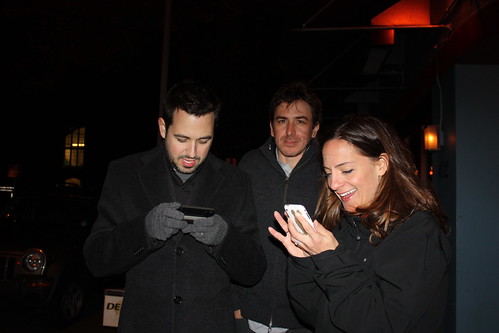 Chris gives his patent-pending "What the heck is wrong with our spouses?" look.

Eventually we found a chocolate place. Do not ask me the name of said chocolate place, because I have no idea. In order to find it, just get drunk and follow Rand and Laura in 30-degree weather. When you are about to quietly strangle one or both of them for leading you down a dead end, Voila! The chocolate shop will appear, and no one will get hurt. (Update from the Everywhereist: After examining my photos carefully, the place is called Moonstruck Chocolates. You’re welcome.)

Also, the chocolates are adorable. 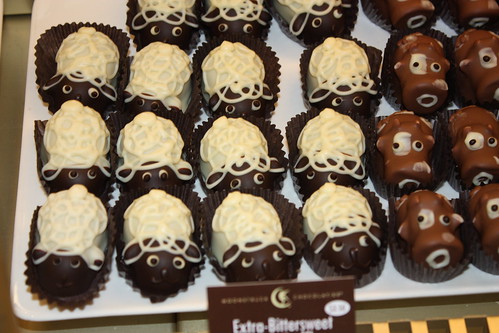 One of the sheep is missing. I blame the chocolate wolves. 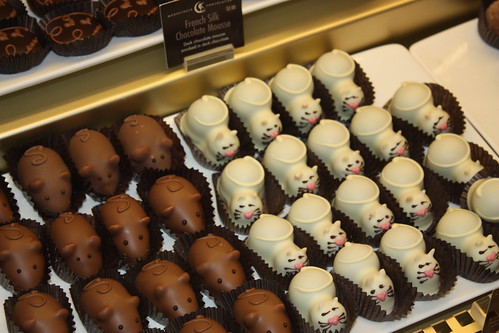 The reason the cats don't mess with the mice? Duh. It's cause they're the same size. 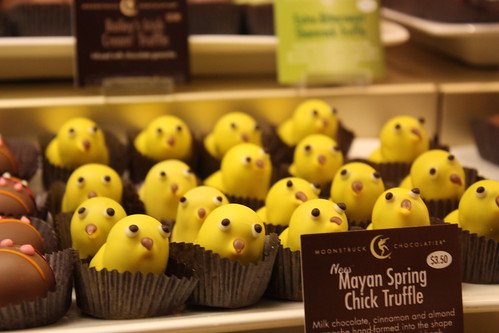 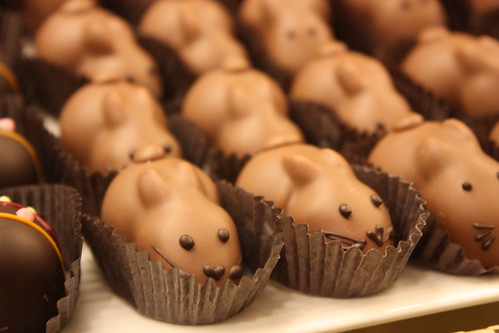 They started with only two chocolate bunnies.

We ended up opting for less fancy candies … 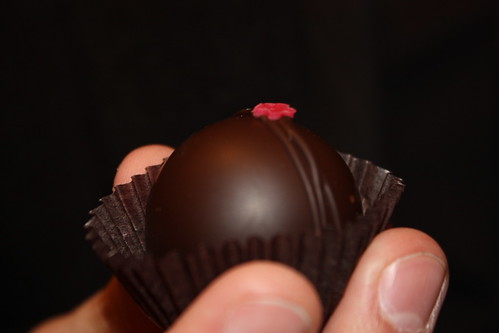 Dont let appearances deceive you. It was great.

I don’t remember what kind of chocolate I got – only that I didn’t share it. And it may have had caramel in it. After having consumed chocolate, I decided we needed more dessert, so we went to a cafe called Papa Haydn. There are few comments about the cuisine there, since everyone seems to go just for dessert, which is stellar.

While we were there, Rand spotted a gentleman in an adjacent dining room who he swore looked just like William Shakespeare. This resulted in everyone wandering in to look at him, though we didn’t really have an excuse to do so (and he totally did look like the Bard. Facial Hair and all) . We even got our waiter to go look (his reponse after returning to our table was, “Holy crap.”) After a while, old Will caught on and started giving us dirty looks, so Rand couldn’t complete the second half of his vision, which was to wander by his table reciting sonnets.

Sadly, I have no pictures of the dessert or Willy.

But I do have photos of the four of us. 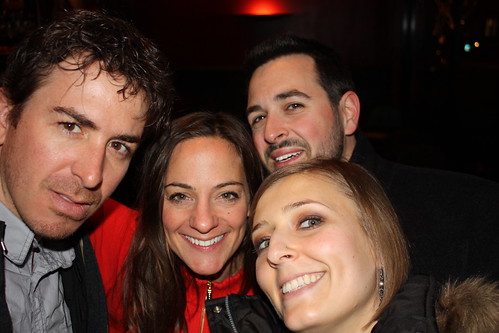 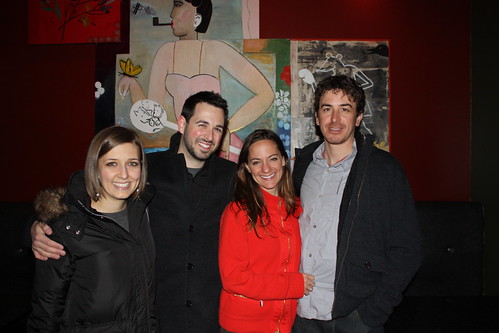 I think my coat makes me look like a porker.

The next morning, Rand and I had breakfast at Kenny and Zuke’s Delicatessen, around the corner from our hotel. The portions are absolutely enormous (that’s what she said!) and I think it would be perfectly reasonable to split something. While it wasn’t incredibly busy, service was lightning fast and friendly, and it seems like they could handle a pretty large volume of people. The bagel was pretty darn solid. I don’t know why you can’t get a decent one in Seattle, but Portland has plenty. 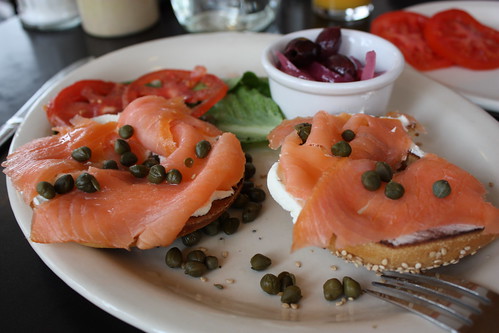 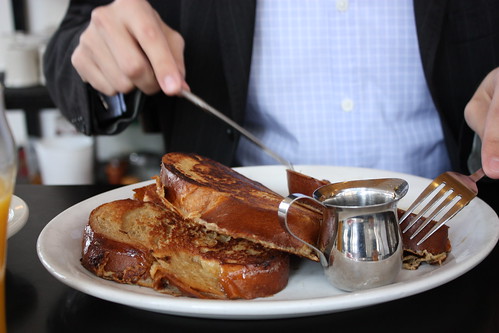 Rand had the challah french toast.

Rand once again had work to do after breakfast, and since it was our last morning in Portland, and I had done nothing but eat and shop (yay!), I felt that I had better go to the art museum before my brain melted. It seems I was too late, because, given how long it took me to find the museum (roughly a half hour, despite it being a 10-minute walk from the hotel) it was clear my faculties had already left me. Which is perhaps why the name of the exhibit was so appropriate. 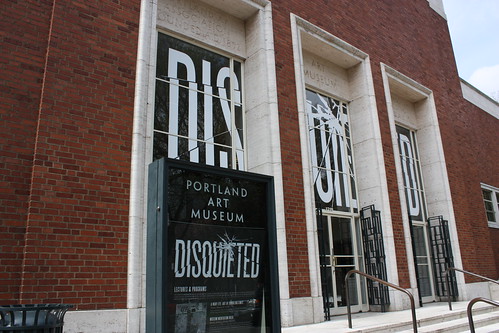 You know what else is disquieting? Not having even a smidgen of a sense of direction.

No photos of the inside of the museum or the exhibits, obviously, but the PAM is usually worth a visit. They get some great exhibits, and the place is pretty big (though hard to navigate – some floors are only accessible by going into the basement, answering some riddle told by the creepy guy under the stairs, and coming out on a parallel dimension on the other side. Kind of a pain in the ass to just see some Japanese wood blocks).

Afterwards, I neglected to take my own advice for lunch, which is that if you love a place, there’s no shame in going back again and again. Let’s face it – just because you’re in a new city doesn’t mean you have to try something new every time you eat. But I felt like going to Ziba’s twice in less than 24-hours would have been just too much, so I opted to try the falafel stand just a few carts down. I could actually see Ziba’s from where I was.

It was like the time I went to a high school dance with a kid whom I could never see as anything more than a friend, and I spent the whole night thinking about the boy I did have a crush on (who was there, amorously dancing with his girlfriend. Sigh).

The point is, the falafel was good. It was great even. It might have even been some of the best damn falafel I’ve ever had. 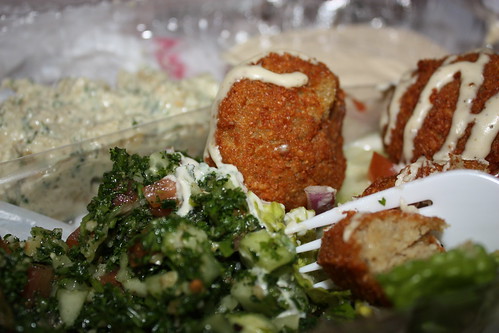 Really, I'm not giving this falafel its due.

But it wasn’t Ziba’s. Sigh. Next time, Portland. I’ll brace freezing cold weather, expensive thrift stores, and even getting miserably lost … just as long as I have burek.