This blog entry doesn’t cover a new topic. In fact, judging by the number of results I got from a Google search, it seems like a lot of people have addressed it. But even though it isn’t new, I still think it’s something worth talking about.

I want to know why the hell Alaska Airlines insists on including prayers with all their food.

No, I’m not kidding. Every time you purchase food on Alaska Airlines, you’ll get something that looks like this: 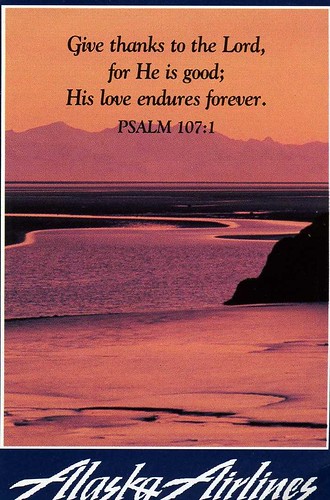 Now that we get upgraded to first class, we see them more than ever, but they’re also included in the Picnic Packs that they sell passengers in the economy section. For $6, you get 2 crackers, a piece of cheese, some raisins, and a bit of prosthetylizing. Is it just me, or does fleecing people at 30,000 feet not seem very … Christian? Also, if cleanliness is next to godliness, why not include an antiseptic wet-wipe along with the snacks instead of the prayer card? Takes up the same amount of space, and, like good old J.C., helps reduce chance of spreading leprosy to your fellow passengers.

I suppose the cards themselves don’t bother me that much (though this guy’s reply to the issue is hysterical). It’s more what they represent that bugs me: a company totally out of touch with its client base, and completely unwilling to listen to criticism on this issue. It’s funny, but the bastard child of religion and business always seems to be fascism and oligarchy, and not theocracy.

If you try using the virtual reply system via Alaska Air’s website (headed up by a cyborg named Jenn) to address this issue, the results are pretty frustrating: 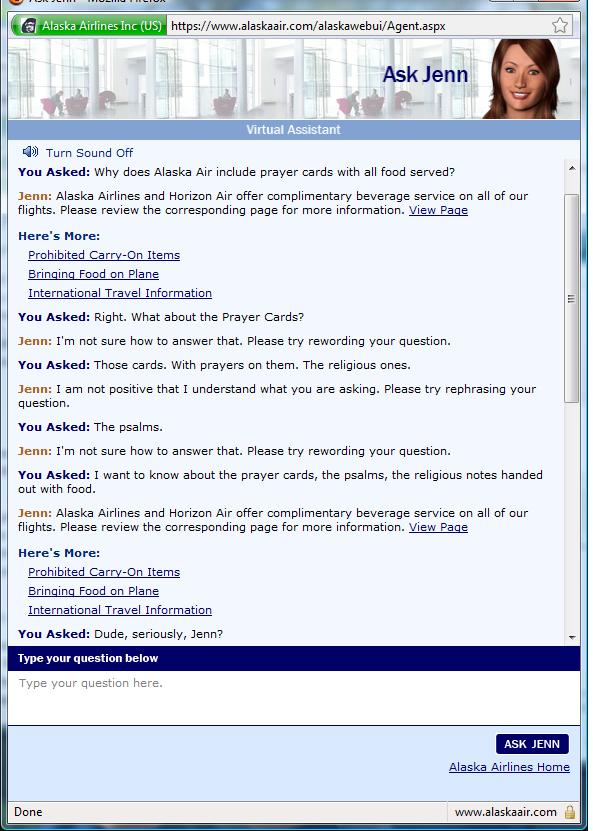 So I tried writing to Alaska Airlines about their prayer cards, and have yet to receive a reply. But Patrick Smith, writer of Salon’s “Ask the Pilot” column, was fortunate enough to get a response when he inquired about the same issue:

“The meal prayer card has been a simple tradition on our flights for over 20 years. The quotes have application across many Judeo-Christian beliefs and are shared as a gesture of thanks which reflect the beliefs of this country’s founding as in the Declaration of Independence, the Gettysburg Address, Pledge of Allegiance and every U.S. coin and dollar you handle. Alaska Airlines is an international carrier with very diverse customers, and we have no intentions of offending anyone or their beliefs. An overwhelming majority of our customers have indicated they appreciate the gesture, and those who don’t are not forced to read it. We do appreciate hearing from you, and look forward to welcoming you on board another flight in the future.” (via Salon.com)

The worst part is the justification of their behavior, which is defended by saying that “hey, what we’re doing is okay – because the U.S. government does it all the time! You aren’t godless and un-American, too, are you?” (okay, fine – maybe I’m paraphrasing a bit. Also, the bit about how we aren’t “forced to read it” seems downright insulting. Generally, when one or two lines of text passes by my eye, I read it automatically. It’s a bit of a habit.) Smith notes that Alaska has every right to include prayer cards (which is, of course, true) but he takes offense at their justification that we see plenty of religious messaging throughout our government, so it must be okay.

He’s right in that it’s totally bogus: it seems ridiculous to justify present day corporate behavior with shit that people wrote, did, and said hundreds of years ago. Besides that, Alaska’s reply presupposes that the government’s behavior is infallible, which it isn’t: personally, I’ve often wondered why the hell god is mentioned on my money. And if there was an alternative, I’d probably use it. (Come to think of it, I do: I always use my cards, and rarely carry cash).

Of course, there are alternatives to Alaska, and yet I continue to choose them. Alaska’s hub is in Seattle (so there’s tons of flights in and out of this town), we’ve got status (which means a lot of upgrades), and frankly, there aren’t that many cheap options out there. Despite this one glaring issue, Alaska really is a pretty decent airline, in my experience.

I just wish they didn’t have those stupid prayer cards. Or at the very least, it would be nice if they were a little more inclusive. Frank Boosman notes in his blog that Alaska could reach a larger audience if they gathered quotes from other religious texts (like the Old Testament) or other religions altogether. He notes that all of Alaska’s quotes are about the awesomness of god, and for a lot of people, that has little to no application. To quote Boosman, “I’ve never understood the obsession in some religious texts with singing the praises of one’s chosen divine being.”

Boosman further suggests some quotes that would find to be more universal and harmonial, found in texts as varying as the Koran and Buddha. After reading his post, I got to thinking about what quote, if it necessarily had to be religious, I would include on a prayer card. And inevitably, it would be this one from Gandhi:

I came to the conclusion long ago … that all religions were true and also that all had some error in them, and whilst I hold by my own, I should hold others as dear as Hinduism. So we can only pray, if we are Hindus, not that a Christian should become a Hindu … But our innermost prayer should be a Hindu should be a better Hindu, a Muslim a better Muslim, a Christian a better Christian.

Of course, if Alaska opened up their quotes to movies, film, and pop culture, with a focus on travel, I think it would be a hit. Imagine seeing card that read, “Toto, I don’t think we’re in Kansas, anymore.”

Or maybe even this quote from Spinal Tap: “Dozens of people spontaneously combust each year. It’s just not widely reported.”

Well, except for this one case …