Note to readers: The original title of this post was “Holy cats, my blog proves useful for once!” I found that title apt, but figured this would be easier for me to find when doing a search. Sigh … practicality and what have you.

Last month, I took a few jabs at the expense of the city of Rye Brook, NY. I know, I know – shocking, right? That I would take the piss out of a town? Absolutely unbelievable.

But it indeed happen. I blame demonic possession. As a result, I might have mentioned that Rye Brook’s food scene is the culinary equivalent of a trying to find a date for prom: there’s no real viable options, and if you end up with anything, it’s just because you wanted to dress up and go out.

Reader Raf C took issue with my position, and maintained that there were some viable options in Rye Brook. He recommended a few spots, including Polla a la Brasa, a Peruvian restaurant in nearby Port Chester. Since it ended up being ridiculously close to the hotel, we decided to stop by.

We ordered according to the New York Times’ suggestion: their eponymous rotisserie chicken dish, lomo saltado (beef stir-fry over french fries), a slice of tres leches cake, and an alfajor cookie.

There are many words that I could use to describe the meal at hand, but the best one that comes to mind is this: ZOMG.

I have to hand it to Raf – his recommendation was fantastic, and the place was so obscure that there was no way we’d have found it on our own (I highly doubt we’d have encountered the NYT article on our own. There’s absolutely no mention of the town of Rye Brook in the review, even though it’s just down the street, so a search would have rendered nothing). 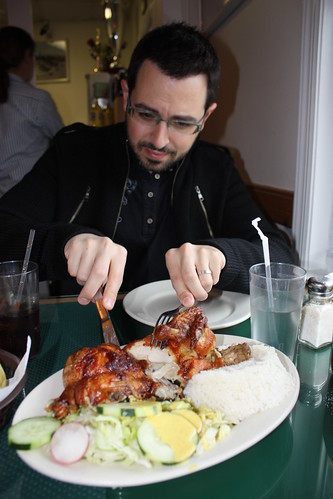 Rand tries some chicken. I don't know why it looks like he's concentrating so hard, but I think it's cute.

This is the lomo saltado. Rand described it as “Peruvian poutine.” He now craves it fortnightly. This will be our undoing. And also, it will be the undoing of the top button of our pants. 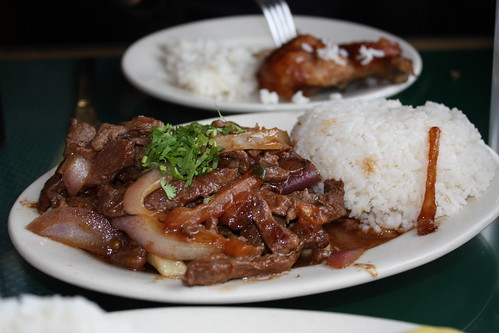 Rand expressed a desire to learn how to make this. I quashed that idea as best I could, because I want to still fit into some of my clothes.

The incredibly cool and moist tres leches cake, which was not unlike a coffee-less tiramisu, and the alfajor cookie. The cookie was unreal: two light, crumbly shortbread cookies that were just perfect – not too sweet or dense – with a layer of caramelly dulce-the-leche in between, and dusted with powered sugar. We also ordered one for the road, which I think we ate before we got to the car. 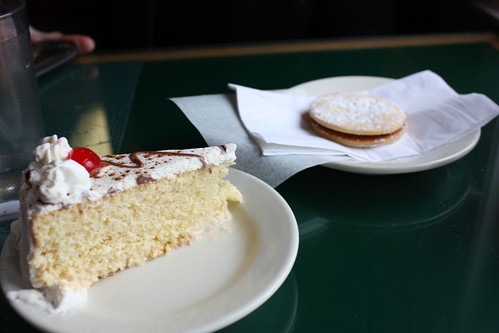 I think the final bill came to about $20.

Of course, none of it would have been possible without a suggestion from reader. And the suggestion probably wouldn’t have been provided had I not trashed on his hometown in the first place. I’m sure you see where I’m going with this. Basically, whatever filter I once may have had, I’ve completely thrown it to the wind in hopes of being led to more dessert. I’m sure living with me from now on will be excruciating.

The point is, my blog actually served a rather amazing and pragmatic purpose, and I’m thrilled about it. So, please, please, please, keep sending in your suggestions and recommendations. I love hearing them even more than I like complaining about a place. And believe me, that’s a lot.

Now, excuse me while I do a somewhat desperate raid of my pantry in hopes of finding something akin to that last photo.