Please, Please do not read this post at work. Or around children. Or your mom. The photos included are most certainly Not Safe For Work, and don’t want to receive an email lecturing me about not having warned you. Because I just did.

Despite my incredibly foul mouth, my godless behavior, and my penchance for desserts with the word “sex” in their title, I am a bit of a prude.

No, seriously. My mother and I once had a brief talk about sex. It started with her asking me a question, and me responding with, “We are so not having that conversation.”

And that was the end of that.

I mean, I was raised Catholic. And as Stephen Colbert notes, Catholic girls either come out really repressed, or really crazy. And I fall firmly in that first category. I mean, when my doctor asks if I’m sexually active, I kind of want to tell her, “No. No I am not.” Even though I’ve been with my husband for 9 years. Because having someone think I’m in some weird sexless marriage is actually preferable them knowing I have sex (which I totally don’t, by the way).

Welcome to my neuroses, folks. There’s plenty to go to around.

You might wonder why, then, neurotic as I am, I would decide to visit something as racy as New York City’s Museum of Sex. And really, the reaons are two-fold. The first is that I’m actually able to talk and write and think about sex, in the context of something as culturally enriching and wholesome as a museum! And the second is that I think it’s good to confront the things in life that make you uncomfortable. And, boy, is there stuff in the Museum of Sex that would make anyone uncomfortable, prude or no.

I will tell you now that, after the jump, the photos get … racy, to say the least.

I had a bit of trouble finding the Museum of Sex, because, as longtime readers know, I have the sense of direction of a drunken pack mule.  But then I saw this: 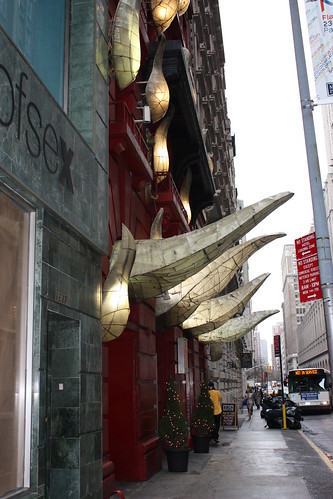 I mean, if you saw this at the end of a street, wouldn't YOU think it was the Museum of Sex?

Turns out I was actually wrong. The dark red building with tentacles dangling out the front, and weird squiggling things that look a lot like gigantic sperm crawling down the front of it was just an Italian restaurant. A really weird looking Italian restaurant. 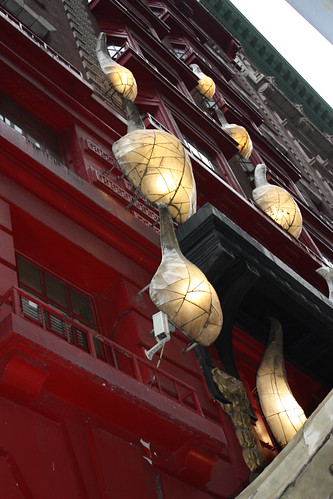 Okay, fine - maybe they're more "tadpole-like" than "spermy", but still.

So while the Italian restaurant didn’t prove to be the Museum of Sex (though I can imagine that a lot of people wandered in there, confused), it was right next door to my intended destination. Whose facade was, by comparison, rather boring. 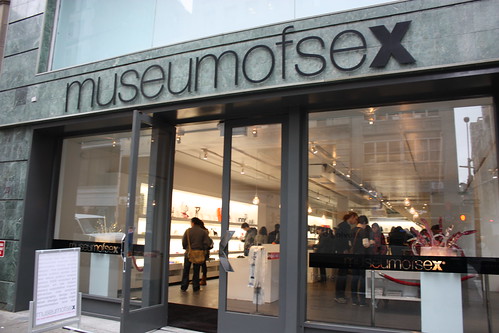 I re-shot this photo a few times to make sure than no one was indetifiable, because when they were, they looked guilty of something.

The gift shop is fairly entertaining, as far as museum gift shops go, and the museum itself isn’t bad, either. It’s small, and still feels like a project-in-development, but it’s truly unlike any other museum I’ve been to, which makes you forgive a lot of its shortcomings.

Err, sorry. Anyway, there’s a great mix of historical sexual artifacts and sex-related art pieces. It makes for a rather interesting blend. And there was an extensive exhibit all about condoms … 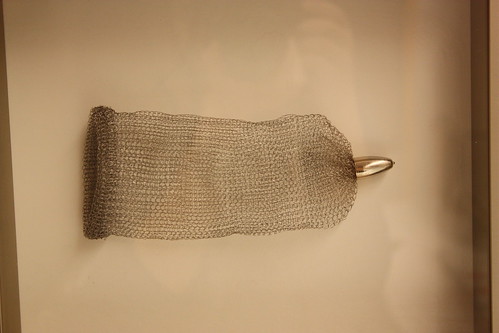 This, I'm pleased to say, was an art piece, and not an actual artifact. It was entitled "Cruel Condom." 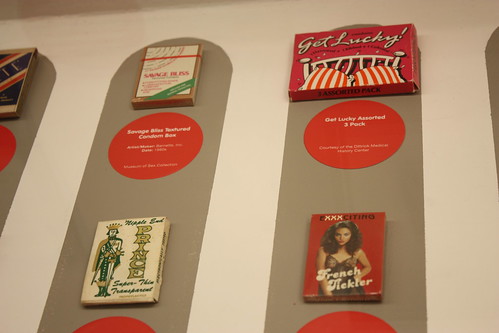 Vintage condom wrappers. They ranged from the 1930s on. 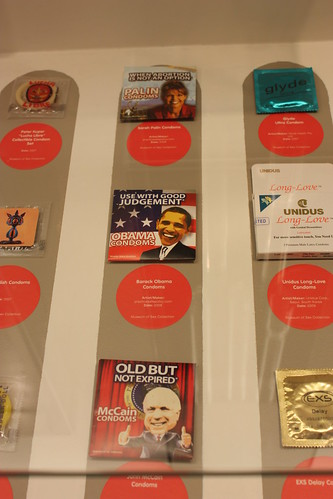 In case you can't make it out, the one on Sarah Palin's condom reads, "When Abortion is Not an Option." 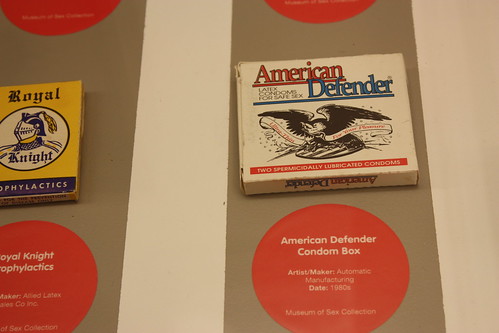 This condom, circa 1980s, seems far funnier than the other ones, though, as it is unironic.

There was also a lot of information about STDs … 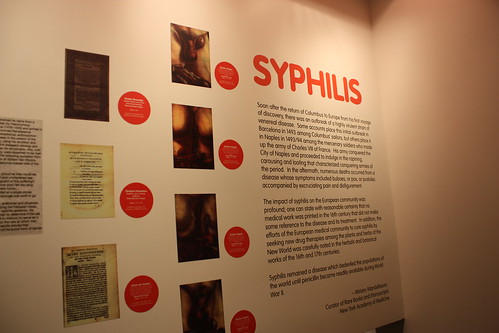 I really want to make a nasty joke about someone I knew in high school, but I'm being mature.

And governmental warnings about catching V.D.s. These ones were on matchbooks, and were targeted to military officers. 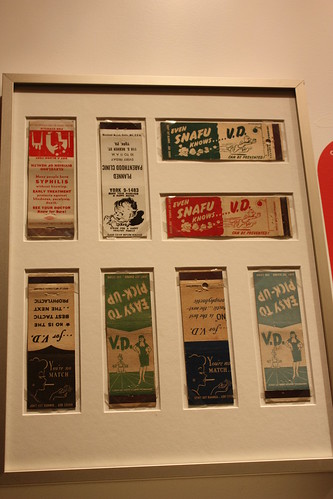 Most feature sexily clad women and text that reads "V.D. ... easy to pick up."

Actually, tons of stuff seemed to be targeted to military officers … 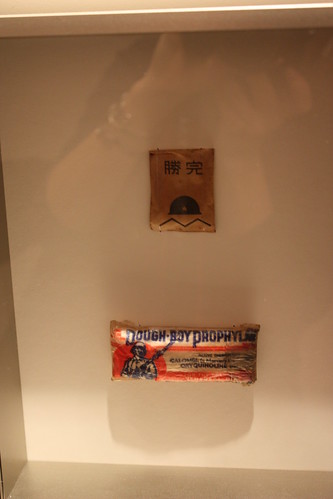 I actually think the design of the top condom is incredibly well done and rather modern. 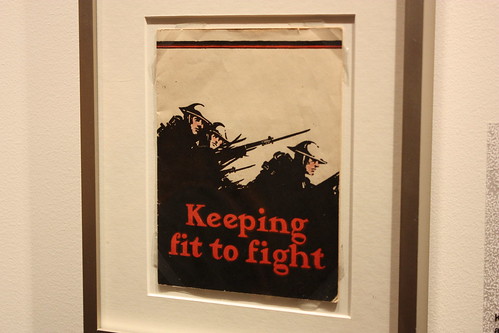 An STD information pamphlet that was handed out to soldiers.

There were some actual sex-themed works of art there as well. By comparison, they actually weren’t all that interesting. 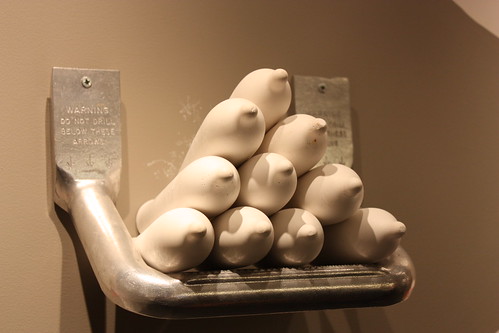 Hand me a bowling ball. 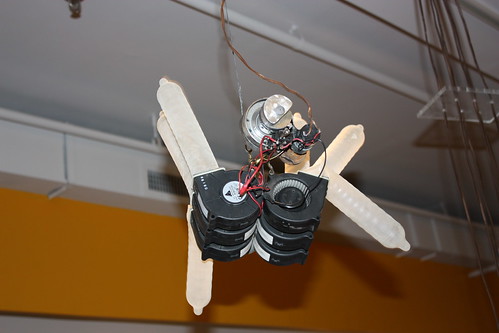 This was some sort of inflatable condom oscillating thingie.

There was a lot of stuff in the Museum by Keith Haring. I was initially surprised, given that he’s such a mainstream artist, but considering that educating people about safe-sex and AIDS were important issues to him, it makes sense to see his stuff there. 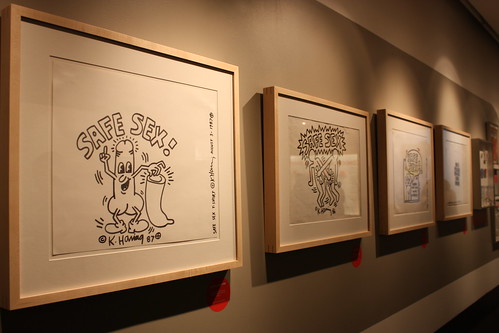 It's funny, but his work still strikes me as sweet and innocent, even in this context. 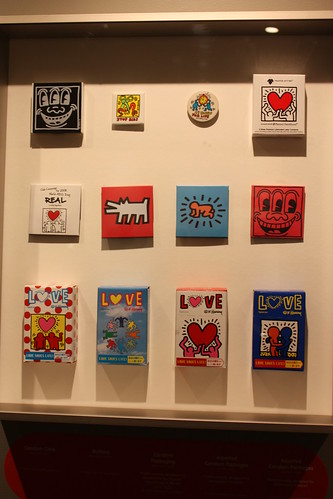 I suppose this might be weird for those familiar with his work only through Nickelodeon.

There was also an extensive collection of more current ads about practicing safe sex. I found the one of a woman given head to a loaded gun (sprouting from a man’s groin) to be quite attention-grabbing. 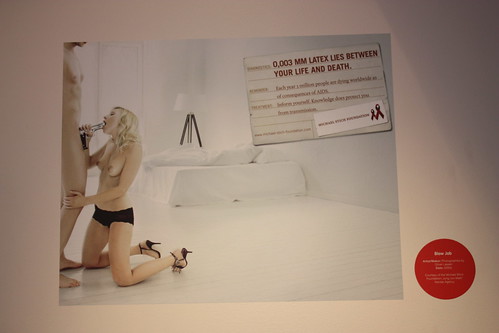 It's funny, but I actually found this more shocking that a lot of the other stuff I saw. Not sure why.

As well as the ads which prominently featured muppet-like characters doing … well … some very un-Muppet-like things. Think “Meet the Feebles” sort of things (for the record, I hate that movie more than anything and wish I had never, ever seen it. The commercials, on the other hand, are awesome.) This little orange guy had to get a new penis, as his was infected with an STD. So they chopped it off and sewed a new one on. The moral? You can’t get a new penis, so wear a condom: 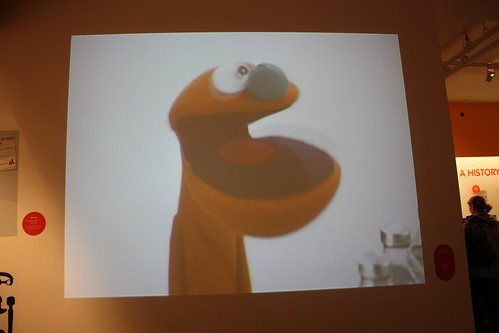 Here he is getting his new penis sewn on (notice the corner of the sewing machine at the far right?) 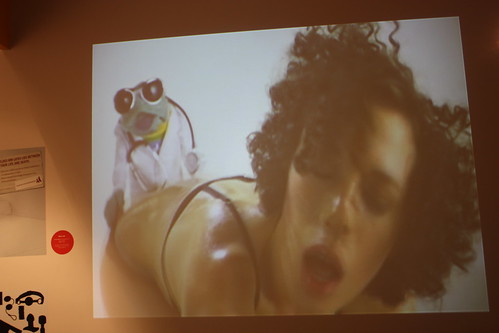 If you’d like to see the commercials in their entirety, go here. BUT ONLY IF YOU ARE NOT AT WORK, AND NOWHERE NEAR CHILDREN OR THE ELDERLY. Thank you.

There was also some rather extensive erotica exhibits. I will say this: I didn’t at all enjoy the “Sex in Film” part, but the rest, which included Tijuana Bibles, and racy Victorian photos was pretty engrossing, in a WTF-kind of way. 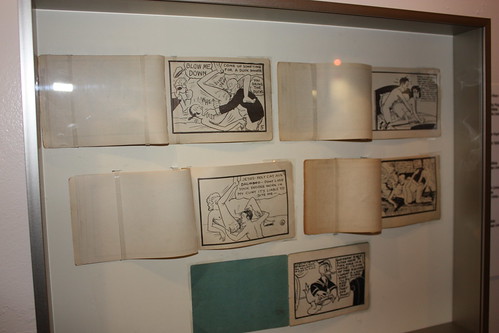 And there were some cameos by celebrities of the day … 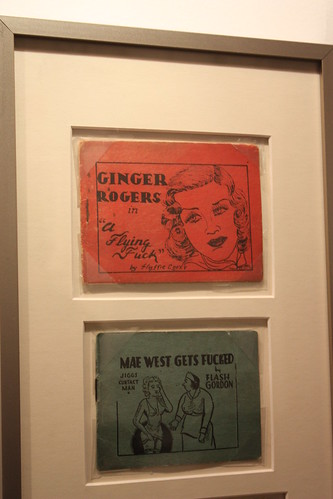 Reminds me of the part in Watchmen where the Silk Spectre is reading one in which she's featured.

There was also a piece of un-authorized (obviously) Disney erotica which appeared in Hustler magazine (the preceding link goes to Wikipedia, FYI). I had read about the drawing in journalism class when we were studying mass media law. Apparently Disney didn’t sue (despite the obvious and egregious copyright infringement) because they didn’t want to draw more attention to the piece. I had never actually seen it until visiting the museum, though I’ve read about it numerous times (so I suppose Disney’s plan worked): 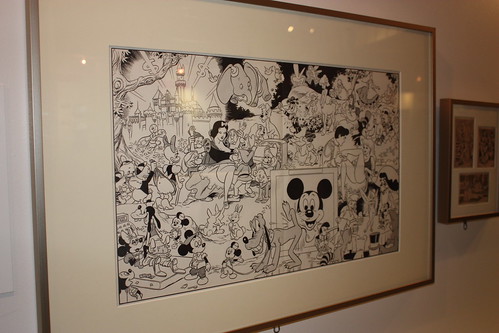 I’ve chosen to use a zoomed out picture in the context of this blog post, but if you want to see close-ups of the piece (as well as other pictures from the rest of the museum) you can find them on my Museum of Sex Flickr Set.

In addition to erotica and historical pieces, the museum also has an extensive exhibition of sex toys and dolls. They’ve got two huge RealDolls on display. If you’re unfamiliar with them, they were the subject of a BBC documentary and one “co-stars” in the movie “Lars and the Real Girl” (which, by the way, is fantastic). I’d never seen one in person, but they had male and female versions at the museum, which were kind of ridiculous looking … 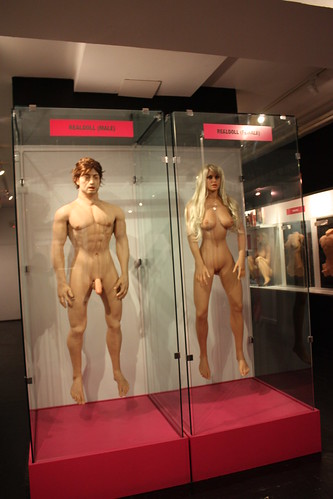 Seriously, whoever designed these does not know a lot about human anatomy ... but maybe that's the point.

Interestingly, while female RealDolls are incredibly customizable (everything from face, ethnicity, hair color and style, breast size, public hair length and other variables), the male basically comes in one style (with exactly one variable. Guess which). I think it’s more a response to supply and demand than anything else.

Considering how small the museum seemed, I’m actually amazed at how many different exhibits they had there, and how much stuff there was to see. I left feeling amused, and, for reasons I can’t quite explain, I desperately wanted to wash my hands. There wasn’t anything that particularly offended me (except for some of the videos playing. That was just waaaay too much of an assault on the senses. Imagine two dozen tv screens, all playing pornography. For some, I’m sure it’s great. But I wanted to run screaming out of the room.) I think it might have helped that I went alone, because I can imagine the entire experience being even more awkward with a friend.

Overall? I’d say if it sounds like the sort of thing you’d be interested in, and if you’ve seen a lot of the other museums and galleries in NYC already, then go. Just look for the building with the gigantic tentacles and sperm out front. It’s right next door.

And if you’re a prude like me? Well … the biennial at the Whitney is quite nice.