Note: Photography is not allowed inside the Tenement Museum. All of the pictures of the interior of the building are property of the Tenement Museum and can be seen on their Flickr photostream. Most of the exterior photos are mine, unless otherwise noted.

The challenge I’ve presented to myself before writing this blog post was as follows: tell you about the Tenement Museum. Try, to some degree, to incorporate exactly how much it meant to me. Make some reference to the current situation that immigrants now face in Arizona.

And do everything without getting too emotional.

I seriously doubt I can do that. Because here’s the thing: my family is right off the boat. As in, there was an effing boat. 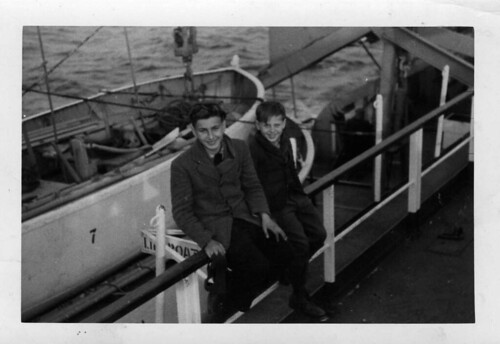 This is my father, at left, with his brother. And the boat they came in on. Circa 1950.

They arrived in New York. My dad said he hung out with the other Russian kids, and the Poles, and the Ukrainians. He went to high school, though he was petrified because he didn’t speak any English upon enrollment.

“Somehow, I graduated,” he told me once.

And then he joined the Air Force, and became, in the esteem of the U.S. government, and later in my own eyes, very important.

But before all that, he lived in a small apartment with his mother, grandmother, and brother, and I imagine it wasn’t unlike the ones they’ve reconstructed at the Tenement Museum.

The museum is located on New York’s lower east side, at 97 Orchard Street. The entrance is down half a block at 108. It’s there where you can purchase tickets for one of several guided tours they offer (the tours are the only way to see the museum). I had hoped to see Getting By, the tour that talked about Russian and Italian immigrants during the depression, but the timing didn’t work out . Instead I saw Piecing it Together, about immigrants who ran garment shops out of their homes. It was actually way more interesting than it sounds, and it focused a lot on Italian immigrants (which describes everyone on my mom’s side of the family). 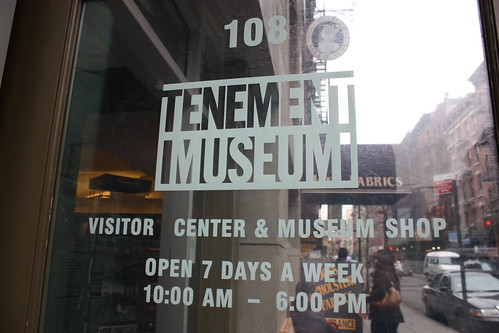 In the background, to the right, you can see some tenement buildings. 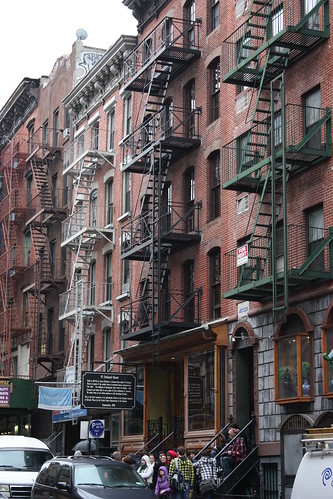 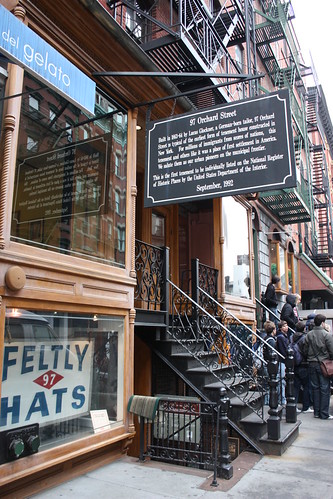 A plaque denotes the entrance to the Tenement Museum.

Going inside feels like a bit of a time warp. Back in the late 1980s, the museum’s founders were looking for a perfect spot on which to recreate the immigrant lifestyle of a hundred years prior. They had little luck: most buildings were too expensive, and heavily renovated. Turning back the hands of time was going to be a lot of work. Then they stumbled upon the building at 97 Orchard Street. They were originally drawn to it on account of the street-level store fronts (one can be seen in the above photo – with the sign “Felty Hats” in the window).

Once they peeked inside the building, they were shocked. It had been condemned in the 1930s, and sealed up for more than 50 years. While in heavy decay and disrepair, it hadn’t been renovated at all: so they found turn-of-the-century finishings and toilets, old bannisters and decades of wallpaper layered over wallpaper. For their purposes, it was perfect.

They would later find that over 7,000 immigrants had lived in the building before it was condemned. Since the museum acquired the location, they’ve renovated 6 apartments, restoring them to what they were like back near the turn of the century through the 1930s.

The staircase at the Tenenment Museum. (Photo courtesy of The Tenement Museum via flickr.com.)

This is the Levine Family Kitchen, which I saw on the "Piecing it Together" tour. (Photo courtesy of The Tenement Museum.)

But my absolutely favorite part might have been the laundry hanging in the back of the building. It reminded me of my maternal grandmother, who would always ask for help hanging laundry out on the line. I remember standing with her, in the hot Florida sun, shaking out damp clothes and pinning them up.

Photo courtesy of the Tenement Museum. (I really wish I could take credit for this one.)

As I left the museum, it was hard not to think about my family. Not just my dad, who sort of epitomized the American dream in so many ways – escaping gulags and hopping on trains to make it from Russia to Germany, and later New York. And he was just a kid. His brother was even younger. He told me how he and his brother would, occasionally during stops, jump off the boxcar they were hiding in with the rest of their family, and they’d run out into the fields.

“We ran through the wheat, until there wasn’t any wheat anymore.”

And upon hearing that, I stared at my dad, and tried to figure out exactly when he became Hemingway.

“What if the train had left without you?” I asked, absolutely shocked that his mother would let him run off into the Eastern European countryside.

Instead, he told me how he and his brother would steal vegetables from the fields, and drag them back to the train, where his mother would cook them on a tiny portable stove in their boxcar. Not an actual passenger compartment, mind you, but a boxcar. In this manner, they slowly made their way towards Germany, where the threat of being sent to Siberia was practically nil.

My grandmother did all this with two kids, and her younger sister and mother. She was, at the time, already a widow, and younger than I am now. In light of that, it’s hard not to look at your own life and realize how incredibly, profoundly lucky you and your own American upbringing have been.

I also got to thinking about my mom and her family. They came over much later than my dad, with the exception of my mom’s grandfather. He had arrived in New York, hoping to make enough money to send for his wife and family, but he ended up getting sick and dying stateside, leaving his wife and six daughters in Italy. Eventually, my mom’s family would make it back here. She herself would arrive just before I was born, and my grandparents came soon after.

Fresh off the boat. Or in this case, the plane.

So, as you can imagine, it’s hard to see the Tenement Museum and not think of all that. And it’s the reason why I get so damn upset when I hear about things like the current situation in Arizona, where police are now within their legal jurisdiction to ask people for proof of citizenship.

It just doesn’t make any sense to me. I mean in this in the truest sense: I don’t understand it. When people say that they’re tired of immigrants taking jobs and using up U.S. resources and services, I genuinely get confused because my family is composed of immigrants. And I’ve never really noticed them taking jobs from other people or living off the American taxpayers.

And the thing is – and I’m sure this is going to piss off a lot of people – but if they did, I wouldn’t think it was that bad. If they lived on welfare and social security (which they don’t) I wouldn’t think it was any worse than anyone else doing it because aren’t we all immigrants? Sure, it might be a generation or two back, but still. We’re all pretty damn new to this country, so I figure we all have equal claim to it. Just because my mom moved here a few months before I was born, I don’t think it somehow gives me more entitlement to an education and federal programs than someone who came over when they were a newborn. Or who came over last year.

I know, I know – this will cause my taxes to spike, or whatever. That’s fine with me. I’m fine with paying out the wazzoo for social and federal programs. Rand says all the time, unironically, that he loves to pay taxes. He likes to know he’s helping put kids in school and build streets and parks. And damn, do I love him for it.

A few months ago, I met an Irishman who talked about how much he loved America, and how many people he met over here who told him, proudly, that their grandparents or great-grandparents were Irish.

“We build your country,” he said to me. “Us and the Eye-talians.”

And I had to smile. Don’t forget the Russians, I thought, thinking of how American soldiers salute my dad every time he goes to the PX to buy something. And how my father waves them off, saying, “Fine, fine. Whatever.”

And don’t forget the Polish. Or the Chinese. Or the Jews. Or the English. Or the Mexicans. Or the Indians. Or the Africans, who, if memory serves, didn’t often come here of their own volition. Or the effing Native Americans who are the only ones who really have a claim to any of land in the first place. We seem to skip over that a lot.

The point is, the thing that really makes America so amazing is that people are from everywhere. The Tenement Museum helps remind me of that.

So does my family.