Rand has been in London for the last few days. Normally, I go with him, but given the current cost of tickets, and the fact that I’ve been to the U.K. twice in the last year, it seemed okay to sit this one out. Besides, it was  a relatively short trip, and this afternoon, he’s coming home. Which is a good thing, because, frankly, I’m exhausted.

I have an incredibly stupid, ridiculous confession. It’s the sort of revelation that would make a former friend of mine roll her eyes at me judgmentally (hence the former part of her title). Here it is: I can’t sleep when my husband is gone. 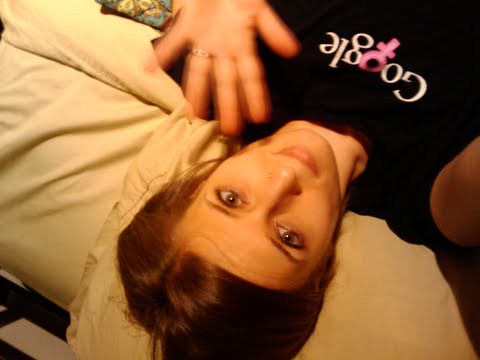 Hello from the wee hours of this morning.

I suppose it’s not too bad – I’m sure that someone who’s truly sleep-deprived would kill for my sort of rest – I generally am in bed for a solid seven hours, but first two hours are spent staring at the ceiling, as is the last hour. I wake up roughly half a dozen times during the remaining four hours, repeatedly checking the time, and cheering myself if manage to doze off for more than 45 minutes. Those are successful nights.

One or two nights like this isn’t too terrible. But when he’s gone for four or five in a row, things start to add up. I get cranky. I get emotional. I want to cry, quite literally, over spilled milk. I forget what I’m doing and stare blankly at my computer screen.

I sing, quietly to myself, “I use to live alone before I knew you.”

And presumably I used to sleep alone, too. And I was just fine. But I don’t really remember. It was nearly a decade ago. Maybe I never really slept – not really – until he came along. Maybe I just lay there, staring at the ceiling.

It’s morning now. I’m contemplating going back to sleep, but I know how pointless that would be. It’s funny, because even when he’s home, Rand and I do not go to bed at the same time. I’m usually completely out by the time he finally steps away from his computer. He’ll creep into the room at 2am, and I won’t stir. But I suppose it’s just that he’s there that makes the difference. And when he is home, I know it. I lie in bed. I listen to the sound of his keyboard. And I sleep – oh, how I sleep.

It reminds me of when I was a kid, and my mom would be up late working on a paper for school. I’d hear the click of her electric typewriter (yes, I am old). Sometimes I’d get up to check on her, and she’d look at me and smile. The smile of a stressed person who is still happy to see you (I know this look well). I’d go back to bed, and fall asleep again, listening to the snap of the keys.

And every night that my husband is home, I fall asleep in that same manner. I suppose it doesn’t count as quality time together, but I’m comforted to know he’s in the same building. Or, failing that, the same continent. The further away he is from Seattle, the worse I sleep. And while the past few nights have been bad, they aren’t nearly as awful as the two and a half weeks he spent in China without me (I still have some serious resentment over that trip).

It’s not that I don’t love the time alone, either. Rand is usually incredibly busy, so whatever free time he has, I want to spend with him, to the neglect of my own projects. And because his free time is so sporadic – problems develop, web pages break, emails filter in without warning – that it’s hard to plan things around it. I say this not out of resentment – it’s my own decision how I want to spend my time, and he’s the best choice. That’s the simple reality of how I operate. When Rand’s not around, other things finally get their due. The dress that desperately needs hemming gets measured and cut. My cousin’s birthday present is completed. Breads are baked. Pizzas are made. Laundry is folded. Articles are written.

But naps are not taken. And sleep is not had.

If this sounds overly sentimental, I apologize. It’s the lack of sleep, clearly. But this afternoon, he’s coming home. And when I see him, I will wrap my arms around his neck and beg him, implore him –