I keep trying to figure out exactly how to write about all the restaurants we visit in a city. New York seems particularly overwhelming, because every place you look up seems to have a few hundred reviews on Yelp. Everything consequently averages out to about 3 stars. It is, in short, impossible to know where to eat. And, for me at least, it’s impossible to shake the feeling that something better might be just around the corner. Thankfully, we lucked out on our last trip. With the exception of this dinner, we ate at some low-key, generally budget-friendly places, and I’d return to nearly all of them.

Far up on the Upper West side (north of Central Park) you can find Freda’s Caribbean and Soul Cuisine, a sparse, clean, family-run restaurant. We stopped by for lunch during our visit to The Cathedral of St. John the Divine, as it is right around the corner, and we were truly impressed with the cuisine. The menu isn’t huge – you can choose from a few Jamaican stews and curries with a variety of meats (ranging from the standard chicken or shrimp to the more esoteric goat or oxtail), jerk chicken, and (on the weekends) fish. There are essentially no vegetarian options, but the sides are all prepared without meat, and fantastic.

The chick peas and potatoes proved to be my favorite side. Everyone raves about the candied yams, but I found them a bit too sweet. And the goat curry, which I ordered as an entree, was delicious, as was Rand’s jerk chicken. Oh, and the prices are a pittance. A decent lunch in NYC for less than $10? Unheard of. And worth the subway ride. 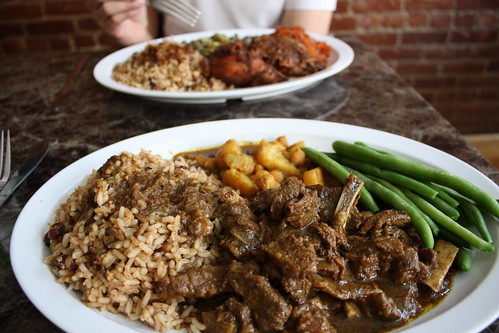 I had a nice time at Sahara’s, but I think that was more due to the company and the food than anything else. Because I was sorely disappointed with the servers and the other diners (of which there were four). At one point, one of the other customers came over to our table and told us to quiet down. This was appalling because 1.) I am from Seattle. We do not do that sort of thing. 2.) The restaurant was virtually empty, and our conversation was the only thing keeping the staff awake, I’m sure. 3.) We weren’t be loud. By New York standards, we were downright Victorian. So, that sucked.

Also, the staff seemed absolutely peeved that we took our time eating. They were clearly rushing us out, even though we only stayed a half hour longer than their posted hours (and we arrived long before closing). And we were only there 15 minutes longer than the other noise-sensitive diners.

But the food? The food was downright good. Not great, not transcendental, but really nice, and reasonably priced for Manhattan. There were plenty of vegetarian options, the hummus was fantastic, and the portions are HUGE (seriously, two people could very easily split an entree and an appetizer and be more than full). The wine was fantastic, too. I remember neither the type nor the prices. Only that we drank a lot of it … Actually, maybe we were being too loud. Whatever. 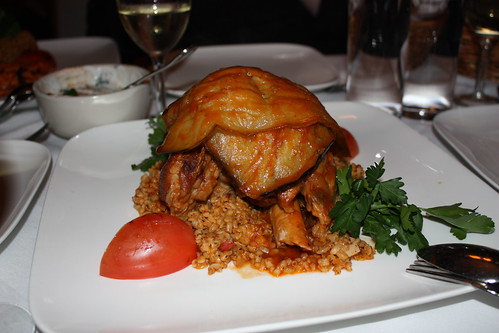 The location of Sahara’s isn’t ideal. It’s just northeast of the Flatiron district, in Murray Hill (where there is approximately nothing else going on). I might go back, but only if I had the same lovely, apparently loud friends with me, and we happened to be in that part of town. And we had, once again, downed too much wine. Because if there’s one thing I love, it’s debauchery repeating itself.

First off, I love hummus. I adore it. I eat hummus at least 3 times a week. I’m obsessed with that garlicky puree of goodness. I buy garbanzo beans in freakish quantities. If a restaurant has hummus on the menu, Rand will take care to point it out. Or something he will simply order it on my behalf. Were it illegal for whatever reason, I would be in trouble.

So when I found out there was a restaurant called Hummus Kitchen in Midtown West, not far from our hotel, I tried to limit myself to going only once. And I succeeded. But every time I ate at another restaurant? I was thinking of Hummus Kitchen. If you are, like me, constantly on a garbanzo bender, I suggest you visit. 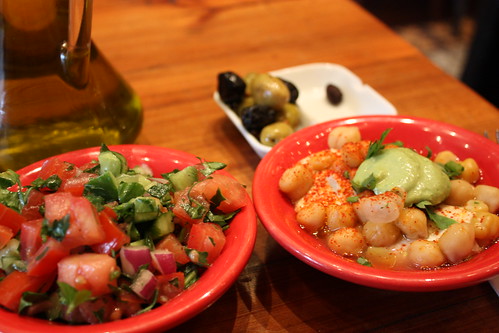 I want to go to there.

There are a ridiculous number of different types of hummus on the menu. And some other stuff, of which I have zero recollection.

I was not terribly impressed with the Noho Star Restaurant. The food was alright, but the idea of paying $17 for a salad (even if it was entree-sized, and had duck on it) just seems absurd to me. Even though it was pretty … 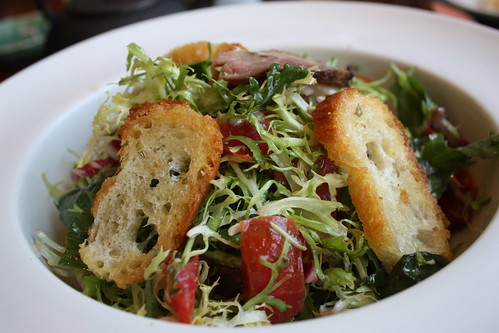 I won’t be going back again, if I can help it. Even though the food wasn’t bad, and the service was lovely, there are simply too many viable options in New York to waste time there. However, on the day we stumbled upon this place, my companion (who’s pregnant) and I were cold and hungry, and a little bit lost. And she liked it a lot, so there’s that. Plus, she’s awesome. Behold: 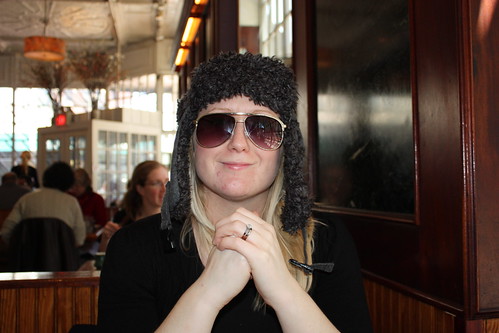 See? This was the best part of my meal. Sadly, that hat (which was mine) was lost by me a few hours later.

I used to think there was a limit to how good a sandwich could be. After all, I thought, it’s just a sandwich, right? Oh, but how foolish and naive I was. Because I had yet to visit Via Quadronno, a tiny cafe and bakery just around the corner from the Whitney Museum. We popped in for lunch, and despite how busy the place was, were seated and served rather quickly. We all ordered sandwiches (they offered pastas and a few other items on the menu). We were all incredibly happy with our food. The bread was crisp but not of the sort that cuts up the inside of your mouth. The combinations on the sandwiches – occasionally esoteric and incongruous seeming – turned out to be brilliant. And the lunch prices hover between$10-15. 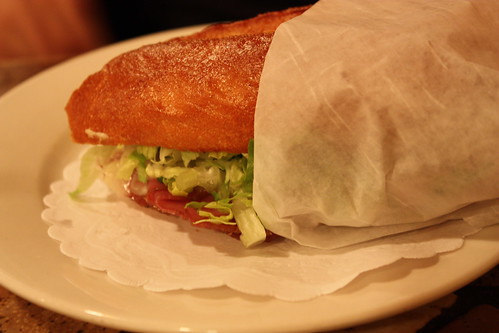 This highly-rated restaurant proved to be another bust. The food was lovely, but incredibly expensive, and it took positively forever to get our meal. We had a 5:30 reservation for dinner, and had to rush like mad to make our 8pm show, even though we let our waiter know ahead of time that we had theater tickets (in all fairness, it wasn’t our servers fault. Something was clearly going wrong in the kitchen). We fared better than the folks who were seated next to us – they arrived around the save time we did, and never got their food. We overheard them complaining to the floor manager, and frankly, I thought they kept their composure, especially considering how low their blood sugars must have collectively been.

I wouldn’t go back there, but it wasn’t that miserable a night. Once again, when you’re in good company, it doesn’t matter if the restaurant meets your expectations or not. 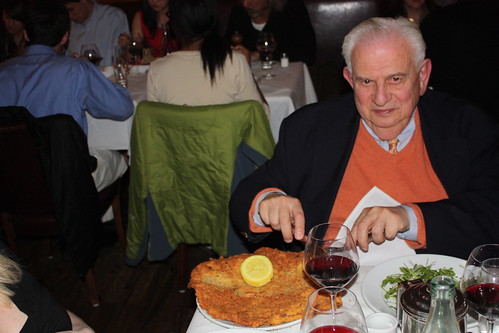 This is my hubby's grandfather. If you've never had dinner with him, I strongly suggest you should.

I was full-on lost, hungry, and trying to find the Museum of Sex, when I very nearly walked straight into Les Halles, the French restaurant made famous in Anthony Bourdain’s Kitchen Confidential. Which seemed, for lots of reasons, entirely appropriate. I’m a Bourdain fan (sigh, I know, I know – the man’s sort of become what he’s always hated, but I still love him), and I was hungry, so I popped in.

The day had been grey and a little chilly, and inside the dark wood and dim lighting were quite welcoming. It reminded me of some of the older bars in Seattle. They tried to seat me at the bar, even though the place was empty, but I pushed for a table. I hate this tendency that restaurants have, of seeming to hold tables when there’s no need.

I enjoyed the food. It wasn’t exceptional, but it was solid French cafe food (which I adore). I got escargots and a salad and enjoyed them both despite feeling like I had paid a weensy bit too much. If you’re a Bourdain fan, go. If not, unless you’re in the area, and hungry, you can skip it. 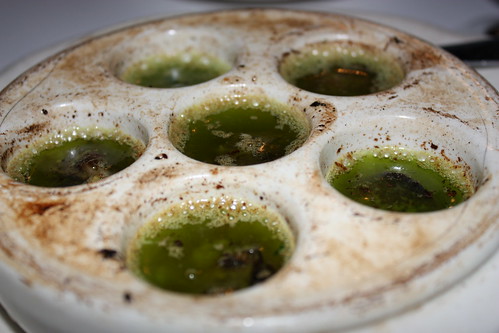 Everything is made better by the addition of copious amounts of butter and garlic.

It seems best to end my restaurant round-up with talk of dessert. Some friends of ours suggested Billy’s Bakery, which they claimed was better than Magnolia Bakery. After hearing a comment like that, and knowing that it was within walking distance of the restaurant where we’d had dinner, there was no way we could not go (note: we ended up eating at Tia Pol’s, which I didn’t include in the round-up due to laziness and lack of photos. While easy to walk past, it should NOT be missed. If you’re in Chelsea, go).

And … Billy’s Bakery was very, very good. Not outstanding or mind-blowing, but very good. They had a wider variety of cookies and non-cupcake treats than Magnolia, and the seven-layer-miracle-cookie-bar-type-thing we had was great (despite inducing mild diabetic shock). But the cupcakes seemed remarkable similar to Magnolia’s: not a problem by any means, but since the recipes at both bakeries doesn’t include salt, the result is a cupcake’s with little height to its flavor. If you like that flat, sugary taste, then you’re in business. If you’re like me, and sprinkle salt on everything, including your dessert, you might be a weensy bit disappointed. 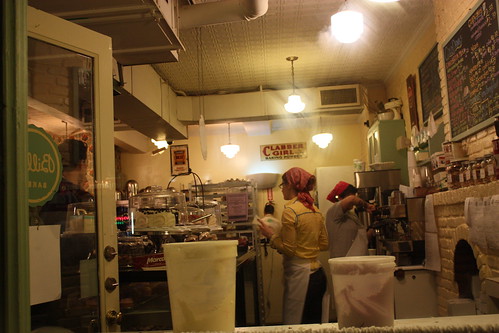 It even looks like Magnolia Bakery from the inside ...

But if you have the chance, stop by. If anything, so you can say to your non-New Yorker friends, “Oh, Billy’s is way better than Magnolia Bakery.” And they will be utterly and truly impressed by your knowledge of the city. Trust me. It works.

So that’s it for the inaugural edition of Restaurant Round-Up. Let me know what you think. I realize it’s not unlike information you could find in a million other places on the internet, but it’s distilled and a hell of a lot more accessible. And who knows … it might even prove useful.