This week’s post is courtesy of my brilliant friend Laura, who I’ve known the 10th grade. I could go on and on about Laura’s awesomeness, but this story illustrates it perfectly:

Laura and I were in a terrible statistics class our senior year of high school. It was a requirement for the IB program, and I think it’s safe to say that both of us hated the class. One day the teacher, Mr. Jacobson (who had just become a father) asked our table a question.

Laura, who was generally rather quite in class, mumbled something.

“What was that?” Mr Jacobson asked.

And so Laura repeated what she said, this time louder, and with an Australian accent.

“THE DINGO ATE YOUR BABY.”

Mr. Jacobson stared blankly at her for a few minutes.

Finally he replied, “No it didn’t.”

He then went back to teaching class, and gave up on engaging us in conversation. It was awesome.

I assure you, dear readers of Everywhereist, that I thought long and hard about what I should write for what I hope is only the first of at least several guest blog posts that you will bookmark in your web browser of choice and cherish forever. (Well, a girl can dream, can’t she?) My topic for today is how to avoid common pitfalls when traveling to an athletic event in which you are competing. I tried to re-word that to make it sound more exciting (or at least shorter), but all other descriptions were too vague for my attorney brain to handle.

Several years ago my husband and I began competing in races. I’m not sure what you think of when you hear the word “races”, I guess you might think of Nascar or the Kentucky Derby. I’m mainly talking about triathlons, but we also swim and run without the biking part. One time we biked without the swim and run part, but it is something of which we do not speak because it resulted in a very silent car ride home.

At any rate, much to my husband’s chagrin, some of our races have taken us out of town. I have now been banned from scheduling any races more than half an hour away from our house without prior approval. Luckily for you, my husband was slow to catch on and I picked up on a few things that could make your life easier if you are planning any destination races.

Tip #1 – Use a packing checklist

Duh. Yes. I know. This is very simple. Here is my added, bonus, very special, tidbit of advice: use a checklist specific to your event that you did not create yourself. I know for triathlon there are a lot of lists out there and suggestions for what you need in your “tri bag”. I assume the same goes for most other types of athletic competitions. My membership to the USAT actually came with a laminated checklist that I keep in my bag so I always know where it is. If you make the list yourself you might forget something. If you use a list that a professional made you a) can be pretty sure that it is complete and b) have someone other than yourself to blame if you pack everything on the list and still don’t have everything you need. 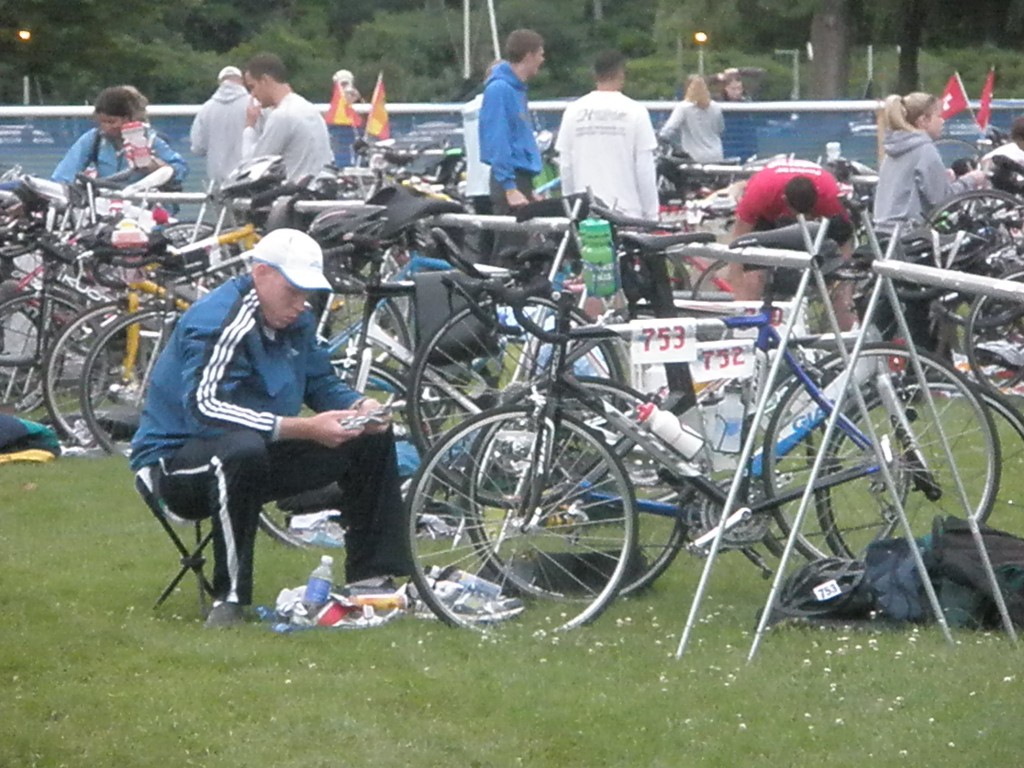 Hard to believe he forgot anything when you look at that pile of crap.

The importance of this tip varies depending on what kind of activity you have planned. Last summer I showed up on Cape Cod for the Falmouth Road Race without a running shirt or sunglasses. There was a relatively easy (although, of course, overpriced) fix for that at the race expo. However, if you are doing something that requires special equipment or something that needs to be broken in before it is suitable for use in competition you could be literally up a creek without a paddle. You also can’t discount the possibility that whatever you need might not be available for purchase at your destination or maybe it is just going to be a pain in the rear to find a replacement.

If you have a bike, kayak, skis, or anything else on the top of your car, be vigilant about your clearance. This may also seem like a no-brainer, but when you are focused on finding your way to a new place or are either in vacation mode or in pre-race anxiety mode you might be prone to make the mistake of driving into a parking garage with your bike on the top of your car. It doesn’t matter how fast you can ride your bike or paddle your kayak (what is with me and the kayak references today?) if it doesn’t make it to the start line in one piece.

When traveling with something on your roof, use the earth’s natural qualities such as the sun and subsequent shadows to create a handy reminder that there is expensive athletic equipment right above your head, like so: 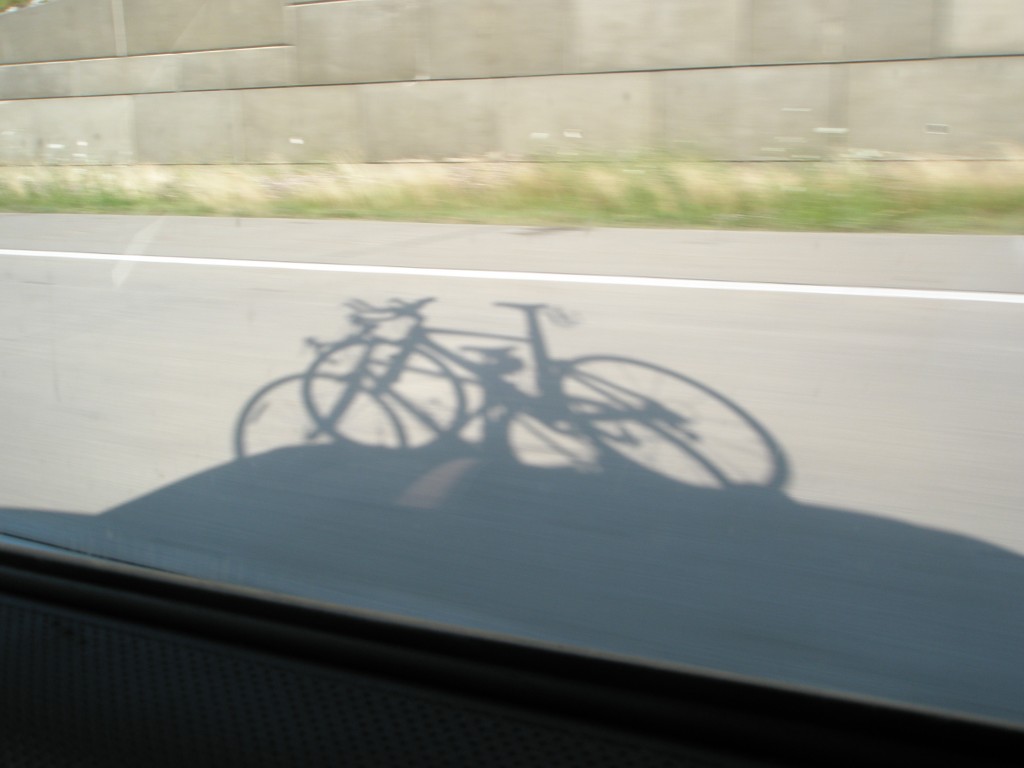 And remember: no matter how cool you are in real life, the people behind you in the drive thru line at Wendy’s will not think you are cool when you have to back out of the line because you remembered that your bike was up there at the last minute.

If you know that you are competing in an event at a given time, in a given place, there is simply no reason (other than a hotel not taking reservations that far ahead, in which case you should find out what day they will start taking them and call that day or get on a waiting list) not to make your plans for accommodations as well.

In one of my first big, destination race experiences I waited until about five months before the event to make a reservation. After the first two chain hotels I called were full, I started frantically dialing the phone without regard to what the reviews on TripAdvisor said. Dead rats in the bathroom? I didn’t care. Cigarette smell in a non-smoking room? No problem. (Anyone else a little surprised that I put “dead rat” and “cigarette smell” in the same category of grossness? Yeah, me too…) Everywhere within an hour drive that had a name I recognized was full.

I had to think outside the box and outside my comfort zone. I turned to bed and breakfasts. Luckily we were headed to the Finger Lakes and there were plenty around. The Finger Lakes Bed & Breakfast Association has an awesome website that was invaluable in this endeavor. Many had vacancies the night after the event, but not the night before. I briefly considered a Jetsons-themed room at a “gay-friendly” B & B even though it was only available one of the two nights I wanted just because “how fun is that?”

We ended up in a bed and breakfast with only two guest rooms about twenty minutes from where the race was called The Hayward House. The proprietors were friendly (and Penn State alumni!), but quite disappointed that we would not actually be around for breakfast. The upside was that it was quiet, away from the craziness of what might have amounted to an athletes’ village feel at a big hotel closer to the start and the Amish neighbors were unlikely to steal our aforementioned expensive bikes out of the barn where we stashed them. The downside (at least at first glance) was that there was no television or phone and no bathtub, which might have been nice after the race. I have to tell you (because it is the first thing I tell anyone when we’re talking about this trip) I have seldom slept as soundly as I did at the Hayward House.

Short story, long, whatever your preference is: convenience to the race start despite lack of character or need for ear plugs or a Jetsons-themed room at a charming B & B, make your reservations early – and by early I mean, much earlier than you think you need to. If any of you out there are ever planning to do an Ironman that means the same day you register for the event.

Tip #5 – Clean up your gear (or roll down the windows)

Do not under any circumstances leave your used athletic clothing or items like towels and wetsuits in your car while you get cleaned up and pack the rest of your stuff. You would be surprised at how quickly the interior of your vehicle can become funky and how long it can take to de-funkify your car after making this mistake. 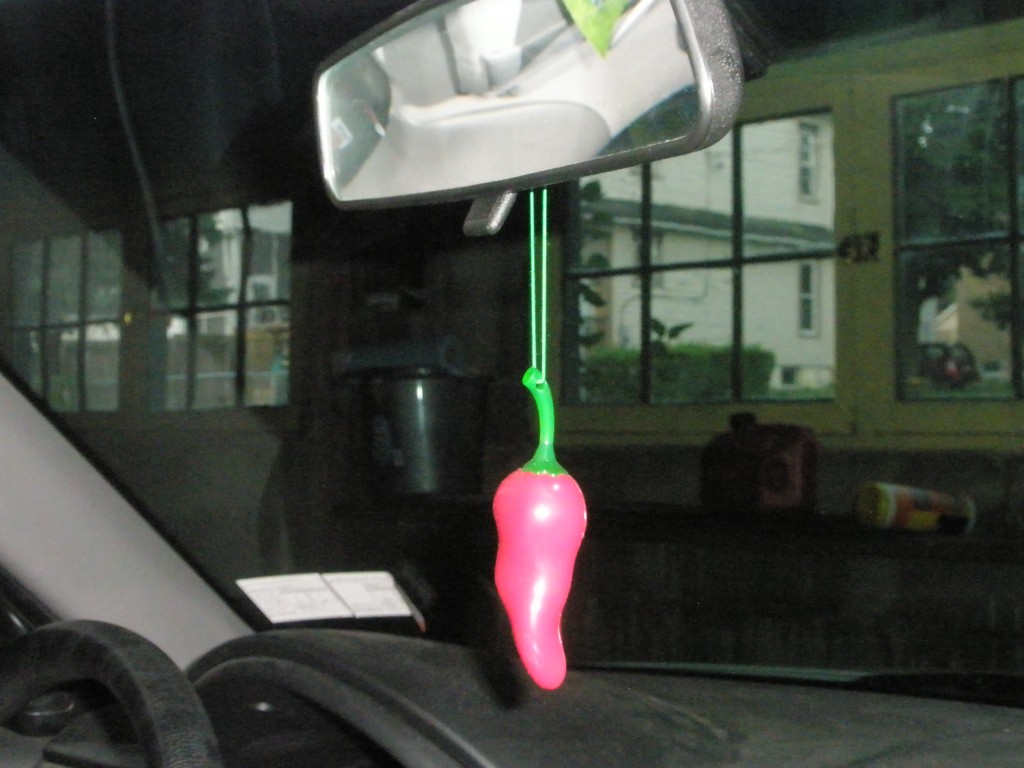 Even the power of the chili pepper cannot dispel the funk.

Both racing and travel should be fun, but can be stressful. Breathe deeply (unless you have not followed tip #5) and enjoy! Combining racing with traveling can increase the amount of potential stress you might experience. One minute you’re keyed up, anticipating how you will feel when you cross the finish line and the next you realize you have no idea what freeway you are on.

But you’re an adventurous person: that’s why you like racing and also why you like to travel. So unless you are about to miss your event entirely because you got lost (and maybe even if that’s the case) you might as well enjoy the wrong turns as best you can. Or buy a Garmin … which is what we did when we got lost on our way to the Finger Lakes.