I’ve been carrying this one with me for a while. Wondering if I should write about it, but mostly hoping I would forget about it. Because this, dear friends, was the Dick Move that started it all. It happened years ago, during an otherwise almost-perfect trip. And when I think of all the others that followed it, I realize they pale in comparison. Because this one was calculated. This one was personal.

It was the Dickest Move of them all.

And finally, nearly 2 years after it happened, I’ve decided to acknowledge it for what it was. Because I’m tired of carrying it around with me. Tired of thinking about it. Tired of feeling that tightness in my chest whenever that weekend is mentioned. After all, it was my wedding weekend. And I deserve to keep only the happy memories from those sun-scorched September days, and dismiss all the bad (even if means pretending that certain people weren’t at my wedding at all). I’m going to let it all go. But first, let me tell you what happened.

And why you should not, under any circumstances, rent a vacation home in Southern Oregon from (redacted).

Note from the Everywhereist: my hubby told me it’s probably a bad idea to use this woman’s real name, and he’s probably right. If you actually might be renting a home in Southern Oregon, and are worried it’s from the same people, just shoot me an email and I’ll compare names. In the meantime, I’m going to call her “Evil Harpy” and her husband “Bub.”

Since I had relatives coming in from every single corner of the planet, I figured that the only way I could avoid the criticism and nagging that comes with making them get a hotel would be to rent a house for them to stay in for the week surrounding the wedding. After searching numerous websites, I found one on VRBO that looked like it would work perfectly. Rand and I contacted the owner (Evil Harpy) and during a wedding planning trip down to her area, arranged to meet her and see the place.

Evil Harpy and Bub were pleasant, and their rental house, while nothing to write home about, were certainly nice enough. We told them our plans – we were getting married at a winery nearby, and we needed a place for my family to use as home base. We’d probably have a few family get-togethers around the time of the wedding – a barbeque before and a brunch after. Evil Harpy’s only concern was whether we’d be having the wedding itself in the yard, since she didn’t think that it could hold all our guests. But I again explained to her that this wasn’t the case.

When my family arrived in town, they were pretty pleased with their accommodations, save for one thing: Evil Harpy’s crazy neighbor, who watched us the entire weekend. She walked along her fence staring at us for hours upon end. My family did a great job of not paying her too much attention, and occasionally waving at her. She waved back, but never broke her gaze. She just continued to stare. A few of them commented that it was a little strange.

It was only later that I would learn that the creepy neighbor was, in fact, doing some weird reconnaissance for Evil Harpy.

Later during the weekend, Evil Harpy showed up at the house unannounced with her father. She explained that she was incredibly proud of the property, and wanted to show her dad all the work that she and Bub had done on the house. (My uncle later told me he thought this was hysterical, because, in his words, they did “an absolute crap job.” )

Evil Harpy and her father walked all through the house in which my family was staying, and even went into the bedrooms (where I believe some of the kids were napping). I would have told her no, but given the nature of her arrival (with her elderly father in tow) I felt like I couldn’t refuse.

When my family left a few days later, my uncle told me that they had left the home spotless. I have no doubt in my mind that this is true. While they drive me absolutely insane, one thing I can say about my family is that they have the utmost respect for the possessions of others. They will return whatever object they’ve borrowed in better condition than which they’ve received it. In the case of Evil Harpy’s home, they cleaned every inch of it, washed the linens, and even dragged their trash to dump, since they didn’t want to leave the trash cans full. Yes, they’re wacky, but sometimes, they make me very, very proud.

A month or so after the wedding, I received a letter from Evil Harpy. I truly wish I had kept it, because, while evil, it was also hysterical. Evil Harpy noted that while the houses were left in pristine condition, and I broke no terms of our contract, she was incredibly upset and angered by the fact that I did not inform her of the fact that we had “not one, but two” family events at the house. And – gasp! – they were catered! (I loved that she was particularly angry about that one point.) We even put folding chairs on the lawn! That could have (it didn’t, but it could have) killed the grass! How dare I! 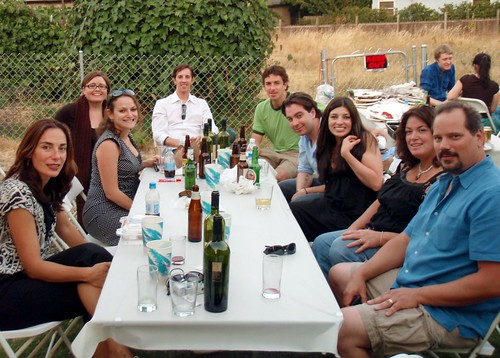 She went on to scold me about my inconsiderate behavior, as well as my lack of manners and professionalism, or some nonsense like that. I promptly ripped the letter in two after reading it.

But even after tossing it in the recycling bin, the note stung. Yes, I deal with a lot of Dick Moves when I travel – but most of the people who commit them don’t go out of their way to do so. They’re crazy, or rude, or stupid, but it all happens in passing. They don’t take the time to sit down and write a lengthy letter that accomplishes little else besides hurting my feelings. I struggle to imagine what exactly had been going through her head …

“Shame on her! Doing exactly what she said she would with our rental home!”

“How can I destroy the contentment of a newly married couple, if only for a few moments?”

or perhaps the rational-emotive,

“I have willfully acknowledged that the house was well taken care of and very clean upon their departure. Nevertheless, I’m in the mood to be hostile and threatening. Where’s my pen?”

And, of course, it profoundly bugged me that the source of her information had clearly come from her spying neighbor.

So, for the sheer effort it took to execute this Dick Move, and because its sole goal could only be to leave behind a path of hurt feelings and sadness, I can safely say …

Dickest Move, Evil Harpy. And a Dick Move to your Peeping Tom neighbor as well. You both kinda suck (and yet, I think a reality TV show about your antics would be hysterical. Please let me know if that’s ever in the works).

P.S. – I considered leaving Evil Harpy a negative review on VRBO, the site on which I found the listings of her rental home. But it looks like VRBO lets the owners edit and approve all the comments, and I’ve a feeling Evil Harpy wouldn’t let mine see the light of day.

P.P.S.  to Evil Harpy – While my uncle noted that most of the remodeling on your home wasn’t done properly, this was more an issue of aesthetics than anything else. There was only one spot we noticed which would actually be cause for concern, as it opens you up to rot and animal infestation. And I’m not telling you where it is.