While we were down in San Francisco last week, we attended a charity event that a friend of ours was hosting. A lot of people in attendance at the event were from Rand’s industry.

I used to be petrified of these sort of social gatherings. Rand usually got swept up in conversation, leaving me in a room full of strangers (the real clincher: many of them knew who I was, and I knew no one. This meant that EVERYONE KNEW WHO THE LOSER STANDING ALONE IN THE CORNER WAS. I couldn’t even hide my social ineptness behind my anonymity). After a while, I realized I had to adapt to survive, and I started chatting people up like a bubbling moron. Someone would ask why I was at the party, and I’d explain my connection to Rand.

“Oh, you’re Mystery Guest!” they’d say, referring to the screen name that Rand had given me on his blog several years ago. I would smile and nod. They’d inevitably be his customers or clients (remember, the party was hosted by a friend of ours, and the guests were all people in the same industry as Rand). We’d chat a bit about his company or the industry as a whole. Run-off of my husband’s internet start-up fame. They’d look shocked when I explained I knew next to nothing about SEO.

But last weekend, at this particular party, something very peculiar happened.

A gal I didn’t know walked up to me.

“Are you The Everywhereist?” she asked.

I nodded, a bit confused.

“Can I get a picture with you?” she asked.

I politely looked around to see to whom she might be referring. There’s wasn’t anyone around, save for my lovely friend Jen who was getting a serious kick out of what was happening.

The gal in question was looking straight at me.

“I love your blog,” she said brightly. “You don’t mind if I take a picture, do you?”

She was clearly talking to me. At this point, I concluded that, in 20o3-parlance (which was the last time I remember being cool) I was being punk’d.

I was elated. I think Ashton Kutcher is so brave.

But as I looked around, everyone I saw seemed well over the 17-year-old age limit MTv has inadvertently placed on its television “stars”, I realized that this girl was actually being sincere (also, Punk’d was canceled in 2007).

So … she actually wanted to take a picture with me?

Apparently, yes. A friend of hers snapped a photo of the two of us, and I made sure it didn’t feature me with three chins, which, thankfully, it didn’t. And just like that, they disappeared into the crowd again.

I was stunned. Jen found the whole thing riotous.

“It’s like that episode of Sex and the City where she goes to France and she meets those kids who love her!” Jen later said. I can never tell when she’s teasing me or not. She would repeat this sentiment a few times over the night. Each time, I’d shriek, “No it wasn’t!” in response.

The whole thing was surreal. I secretly wonder if someone had put her up to it, but I recognized her Twitter handle as one of my followers. I promptly (and tragically) forgot it, and also forgot to ask her to email me the photo. So, mystery gal, if you’re reading this, thank you. You made my night. I’d love to post the photo, if you have it. And possibly ask you what on earth you’d want with a photo of me.

Of course, this sort of thing is par for the course for people like Jen. Hell, if people want to take pictures of me, then Jen’s awesomeness merits a full-time paparazzo. Here she is with one of her adoring fans (okay, fine – it’s our friend Richard, but still, like me, he’s an adoring fan): 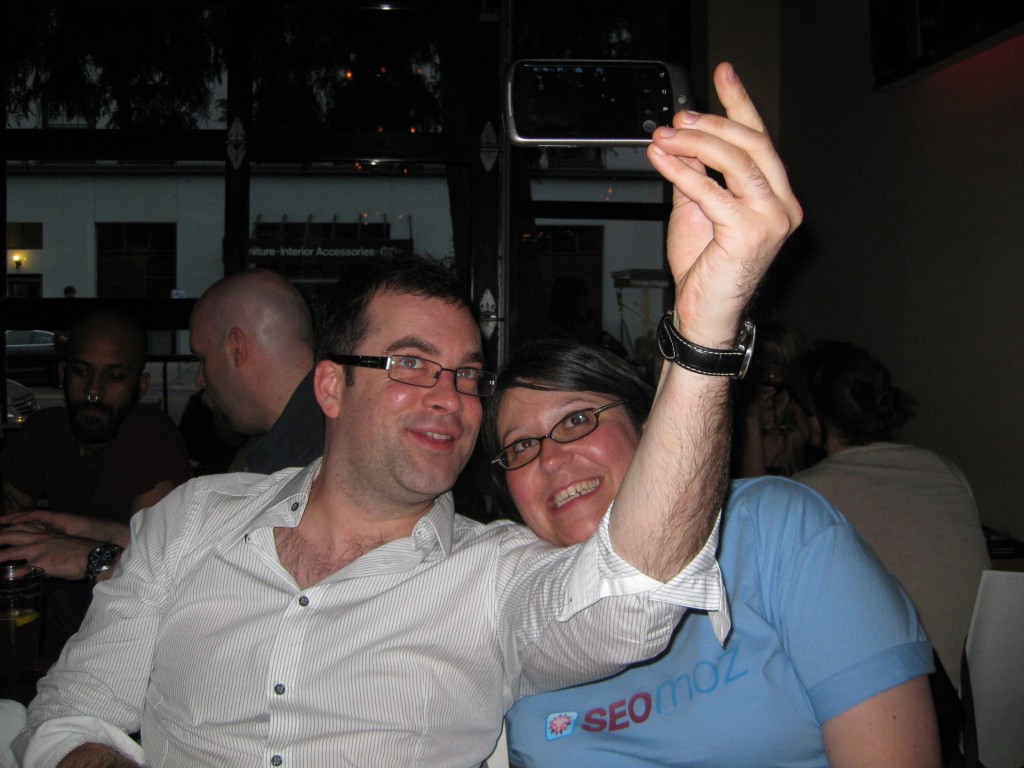 Um, I kind of heart this photo.

Maybe one day I’ll be as effortlessly chill and relaxed as Jen is when people ask for her picture. It is a state of awesomeness I will strive for. Until then? I’m going to keep looking for Ashton, because I am absolutely convinced that someone, somewhere, is pulling my leg.