I know, I know- you’ve heard enough about my crazy adventures getting to the Golden Gate Bridge, right? But while I thoroughly explained how I arrived at the bridge (you can read all about my attempts to get there here, here, and here), my dear husband was pretty peeved that I didn’t write more about the actual visit to the bridge.

And perhaps my hesitation to write about the Golden Gate Bridge was that my visit was entirely nerve-wracking.

While I had not initially planned to walk over the bridge, once I was actually there, I figured I sort of had to. For the record, it is a long way across. A round trip is nearly 3.5 miles, and took me about an hour (I walked quickly, but stopped constantly for photos). 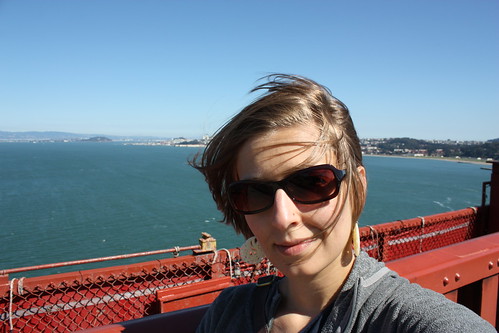 I highly recommend it, unless you are easily rattled. Which apparently, I am.

Here’s the thing: I am a little neurotic. This should surprise exactly no one. I am also a bit compulsive (again, no shocking revelation there). The manner in which these little doses of crazy manifest themselves is a funny one. Basically, I want to hurl my possessions over a bridge.

Sigh. I should go back and explain.

There is a phenomenon known as “horrific temptations.” You know that desire (the one you’d never act upon, but still, it’s there) to scream “FIRE!” in a crowded theater? That awful worry that you might – even though you absolutely don’t want to – suddenly blurt out a curse word in the middle of a professional dinner? Those, dear friends, are horrific temptations.

Fortunately, most of us never act on those impulses. Those who do may suffer from OCD, or neurological disorders such as Tourette’s. The rest of us simply think, “GOD, wouldn’t it be terrible if …” and then shudder, violently.

Bridges freak me out. I am slightly afraid of heights, I think. I am more afraid of falling. And more than anything, I am afraid that I might somehow hurl my things over the edge of the bridge. My wallet. My camera. My car keys. As a result, I find myself clutching my purse and thinking, “Wouldn’t it be just awful if …”

These jumbled thoughts accompanied me as I started to cross the Golden Gate Bridge. At first, I was overwhelmed by the views … 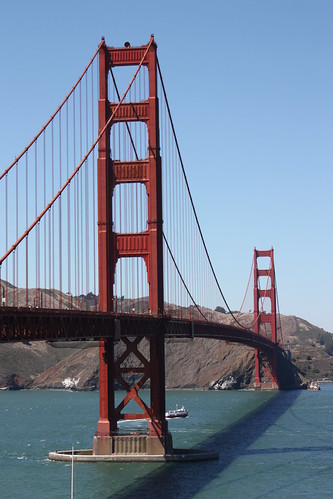 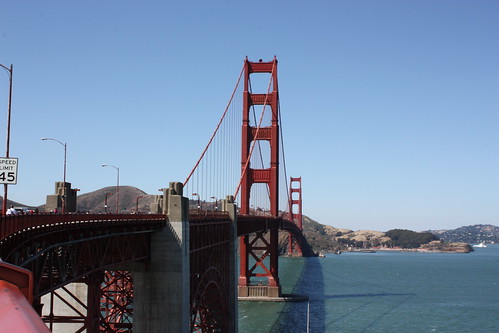 And I should note - even if you are a mediocre photographer (hi!) the photo opportunities are still amazing. 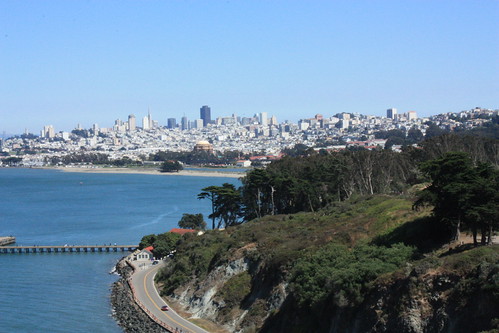 View of SF from the bridge

Then I actually stepped onto the bridge … and, enter neurosis! 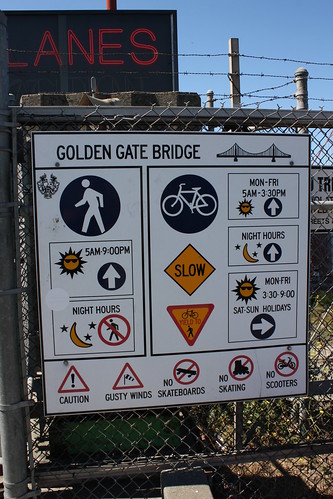 There's no pedestrians allowed after 9pm, which makes sense. 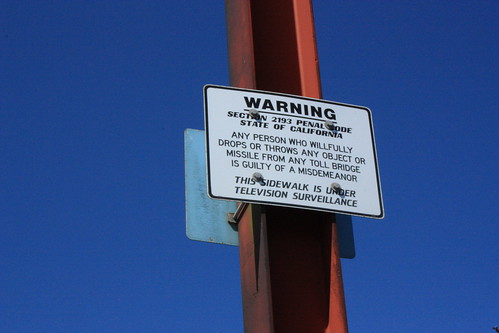 A few steps in and I began to feel panicky. For one thing, the bridge is absolutely enormous, and for reasons unclear to me, I found this petrifying (seriously, would a small bridge be at all better?). And there’s something creepy about relying so heavily on a structure built in the 30s. I know, I know – lots of buildings were built decades ago. Hell, all of Rome is a few centuries old, and that’s the new stuff. But Rome isn’t suspended high above the water. And Rome doesn’t twist up like a corkscrew during an earthquake (as I assume the Golden Gate Bridge does).

And it was at this point that the horrific temptations began.

“Man,” I thought. “It would be absolutely heinous if I threw my camera over the edge.” Not that I would, for a variety of reasons. And so I zipped up my bag (because what if it fell off my shoulder somehow, and the contents spilled into the water? GAH), and clutched it tightly.

I walked slowly, somewhat terrified. It wasn’t really the bag that was bothering me, of course. The bag is just something that I own – something I have complete control over. It’s easier to fixate over something like that than, say, something over which you are powerless. Like the bridge collapsing in the middle of an earthquake. (Note: that video is hilarious and absurd. After watching it, I now realize how silly I was being.) Shockingly, as I walked further on to the bridge, I actually felt a lot better. The thing is solid. 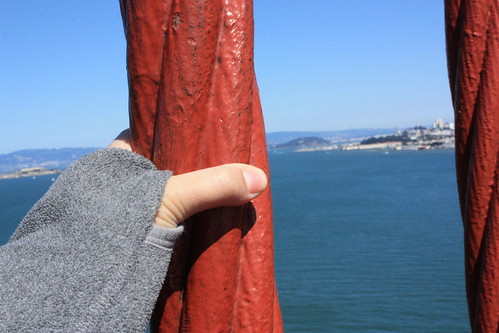 See? These cables aren't going anywhere. (Also, my arm looks to be made of muppet). 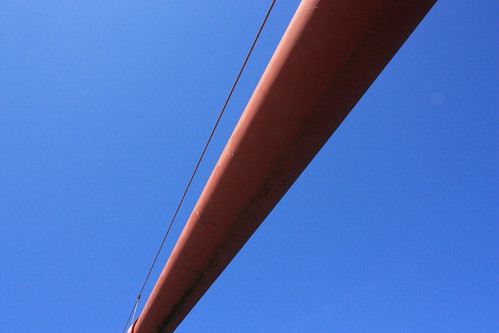 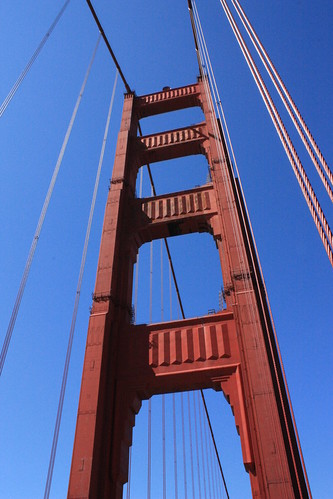 I didn’t feel like the whole thing was going to crumble underneath me. And as soon as that worry vanished, so did my concern that I was going to toss my purse over the bridge. I was still on edge, though. I realized that I was standing on a site where hundreds of people have plunged to their deaths – so many that the Golden Gate Bridge is the most popular place to commit suicide in the world. In 2004, the number of suicides on the bridge averaged out to one every 15 days.

It is a strange and horrible thing to think about while taking snapshots. 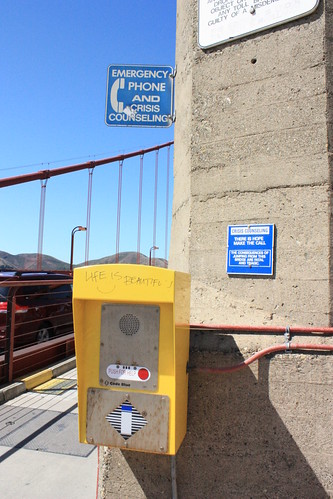 There are emergency crisis phones all along the bridge. 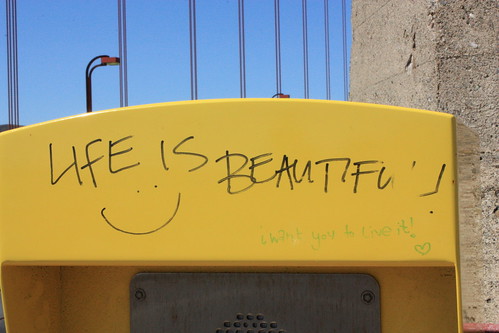 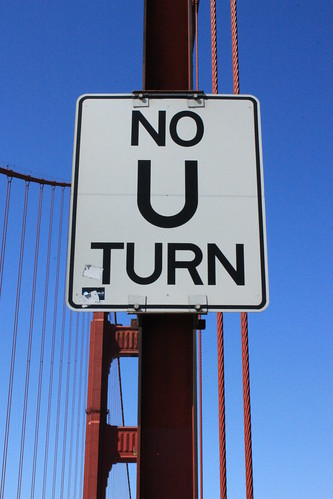 I wondered how many of them had left in the morning intending to do what they did. I wonder if some of them were overtaken by compulsion – by some weird, intense relative of the sensation I get to toss my purse over the edge. Freeing for a few minutes – the ability to let go of everything – followed instantly by regret at all that you’ve thrown away. Of course, purses and cameras are replaceable.

It was a loaded visit, to say the least.

The views were beautiful, but I spent so much time caught up in my own thoughts and worries, that it was hard to appreciate where I was. I was too concerned with my nervous impulses, too preoccupied with being at a place where more than a thousand people hurled themselves off the edge. I thought of a friend of mine whose 30th birthday should have been today, but instead he never made it to see 16.

Crap. Sorry – for the record, I didn’t realize his birthday was today. I started this post weeks ago, and I haven’t thought of him in ages. What was I talking about?

Should you visit the bridge? Um, sure. Yes, actually. Go. But go with a friend. Take someone with you, and hold their hand. Don’t worry that you’ll accidentally toss your camera, full of your memories and smiles, over the edge. Don’t worry about the bridge collapsing. It won’t. Just go with someone that you care about, and remember how lucky you are to have them. Take a few photos. Smile like an idiot.

And then? Go someplace else. 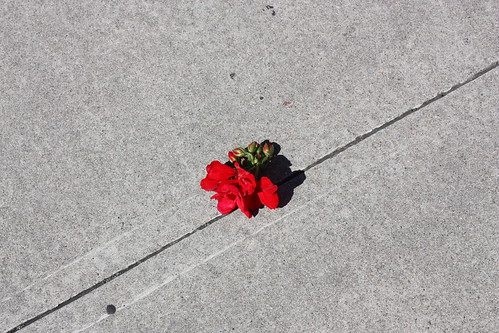