And yet, for reasons I can’t exactly explain, I figured now was a good time to tell you about my accidental trip to the San Francisco Maritime National Historical Park. I’ve embarked on this post, knowing that I’ve been putting it off for weeks, and that writing it will take me forever. What can I say? I make bad decisions.

And bad decisions are largely to blame for how I ended up there in the first place. You might remember my ill-fated attempts to get to the Presidio. On my second attempt, I ended up near Ghirardelli Square, and, high on chocolate fumes, stumbled over to Maritime National Park. At the time, I didn’t even know what it was. 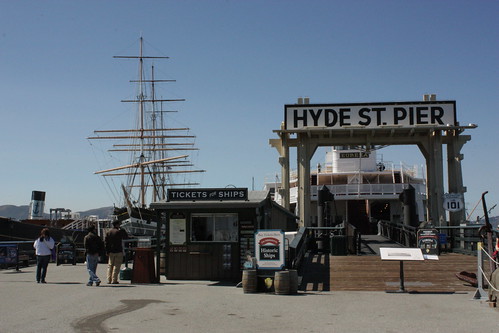 The park includes a fleet of six boats, moored at the Hyde Street Pier. On the day that I went, some of the boats were closed due to strong winds and choppy waves. I have concluded that these boats must have been boring, and that I missed nothing. If you attended the park and know this to be otherwise, please do not tell me. 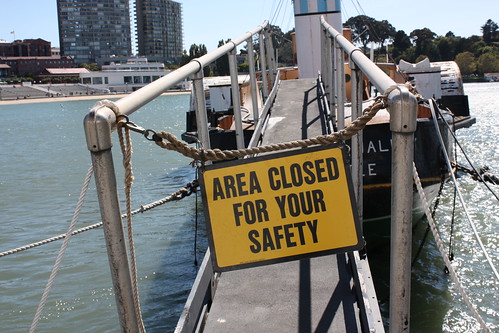 Past this sign? Pure lameness. Or so I hope.

Admission was only $5, which is the sort of lovely price that you don’t think twice about. A $10 price-tag automatically forces you to make a comparison between whatever you’re doing and going to the movies, but this isn’t the case with $5. And the ticket is valid for 7 days, making it easily the best deal in San Francisco (and possibly the entire extended Bay Area).

Besides, it’s the only U.S. national park in existence that’s located on water. And if there’s one thing I love, it’s obscure distinctions (like how the Oregon Shakespeare Festival is the country’s oldest rotating regional repertory theater. I don’t even understand what that means, but I know it’s impressive). 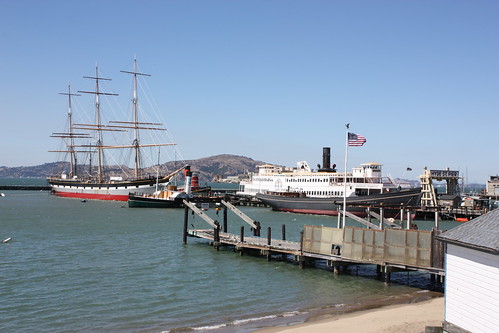 I went on a weekday, and it was surprisingly empty and peaceful. I practically had one boat all to myself: a sailing ship built in the 1880s named Baclutha (which sounds like a foe of Godzilla’s). For the record, THERE IS NOTHING CREEPIER THAN A NEAR-EMPTY OLD BOAT QUIETLY CREAKING ON THE WATER. Seriously. Had it been anything but a sun-swept afternoon, I might have peed with fear. 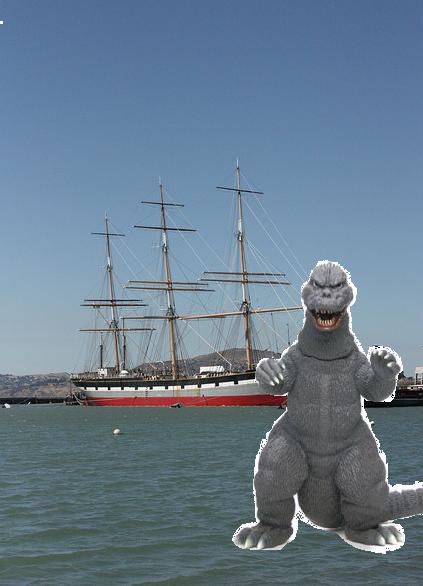 I would totally watch this movie.

But, creepiness aside, it was pretty darn neat. The boat had three different names and owners over its lifetime: It had been the Balclutha, the Pacific Queen, and the Star of Alaska. And while the ship’s past is dark and a bit checkered (including a shipwreck, live animals chucked overboard, and some pretty heinous treatment of immigrant workers who traveled on it) it’s still incredibly fascinating (including a starring role in Mutiny on the Bounty). Plus, it ends well: no awful sinking during which thousands of lives were lost, or anything like that, which I appreciate. 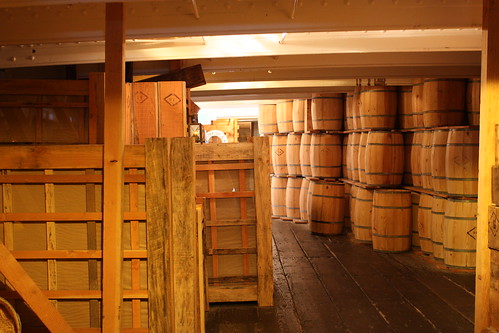 It was a cargo ship. Did I mention that? Sometimes I leave out important details. 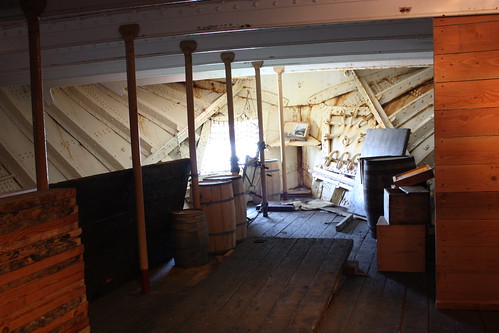 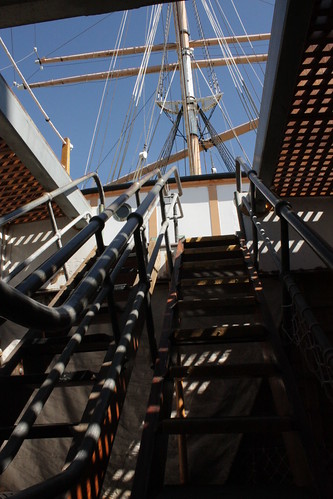 My time spent on the deck had me feeling just a little bit like I was on the set of The Goonies. The temptation to screen, “HEY YOU GUUUUUUUYS!” was more than a little overwhelming. 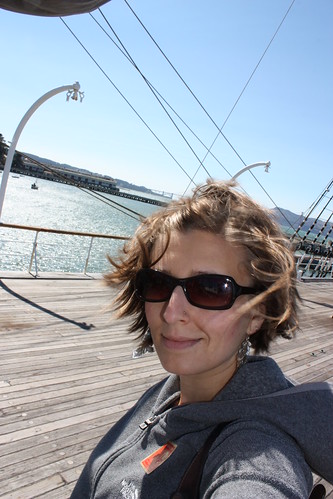 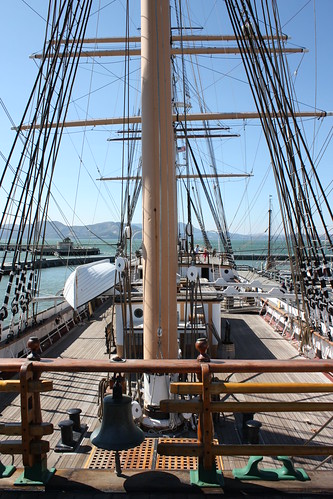 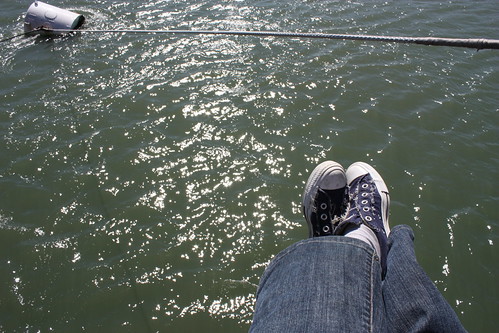 I also hopped on the Eureka, a ferry steamboat built in the 1890s (and one of the few other ships open on that windy, windy day). The Eureka was the largest wooden passenger ship ever built (again, you know how I love weird distinctions) and one of the first capable of carrying automobiles. Though it was built in and chiefly operated in San Francisco, it felt like something out of a Mark Twain novel. It was big and creaky and bright. 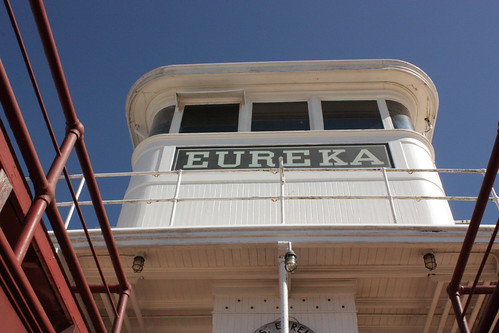 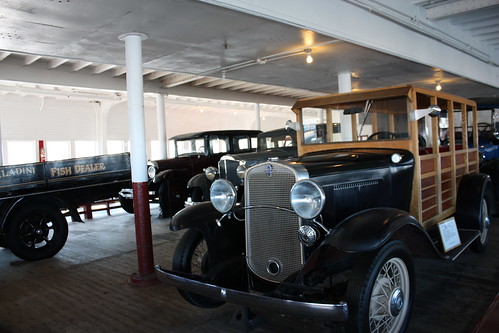 Once again, I had most of the ship to myself, including the wheelhouse (where the ship’s steering wheel is kept. Who says my blog isn’t educational?). Besides the Eureka’s steering wheel, it also included this handy lever, the likes of which you rarely see outside of a Bugs Bunny cartoon. 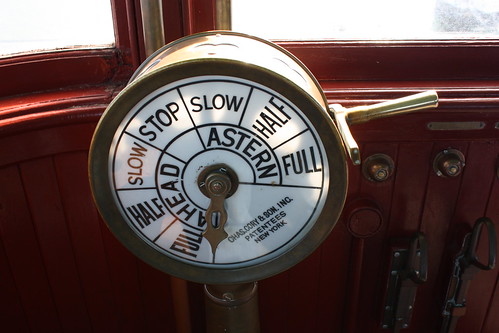 The lever no longer worked. Don't ask how I found out.

Though it’s one of those attractions that I seriously doubt I would have sought out for myself, I had a really nice time. The uncrowdedness of the park (despite being right next to Ghirardelli Square), the low admission price, and the opportunity to do my best Sloth-impression won me over. I’d recommend it, especially if you have a family or kids in tow, but be warned: the park closes early (5:00 during most of the year and 5:30 during the summer months). Still, whether you reach the National Maritime Museum by accident or on purpose, it’s worth a visit.

Plus, what else are you going to do with $5 in San Francisco? See half a movie? Split an appetizer at Farallon with six other people? Skip all of that. Go to the Maritime Park instead.