Folks, what I’m about to tell you may not apply to very many of you – it’s the sort of niche, uber-specific travel advice that only a few of you will benefit from, but I still think it’s worth sharing. For those of you who to whom it doesn’t apply, I hope you will at the very least find it entertaining. Sort of. Maybe.

The advice is this: If you go to the Oregon Shakespeare Festival, I highly recommend taking the backstage tour.

Take it, because it’s only $12 a person, and you get to see parts of the theater that only cast and crew get to see.

Take it, because you’ll get the chance to see the stagehands tear apart a set and build a new one with such speed and ease, it feels like something out of Inception (even if you haven’t seen the movie. And I haven’t. Tell me nothing). 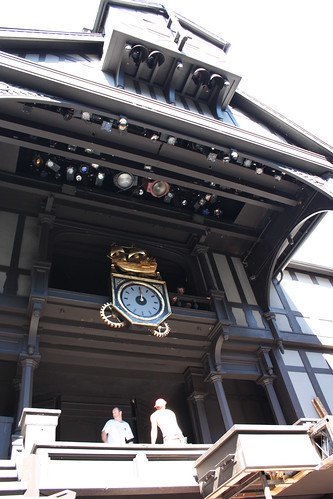 There were only three of them. They tore the place apart like a Fraggle destroying a Doozer-built creation.

And you’ll get the chance to walk up on stage. What you do at that point is up to you. I recommend making extravagant arm gestures and shouting, “ACTING!” 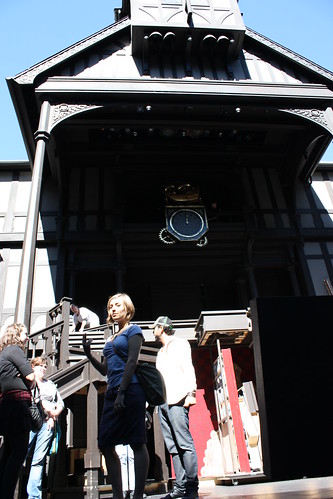 What? You knew I was a dork when you started reading my blog.

But if you do take the backstage tour at the OSF, be warned: the stage will never look the same to you again. The fourth wall will be broken, and you will become acutely aware of just how much work and heartache and love goes into every show you see there.

And you might fall in love – just a weensy bit – with one of the actors who gives the tour. Even if you are married, and rather content with your present romantic situation (in my case, ranking just below the “SO CUTE YOU’LL BARF” mark on the Marital Happiness Scale), it might still happen. It doesn’t hurt, of course, when the actor giving your tour bears a slight resemblance to your husband … 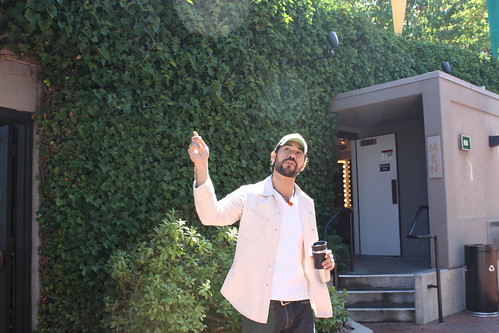 "What was that, David? I can't hear you unless you speak up and take off your shirt."

And when he refers to the OSF as “we” – “We started in 1935”, “We produce eleven plays every year” – it might just break your heart. When he tells you that he considers himself one tiny spoke in the great wheel that is the Oregon Shakespeare Festival, and when he tears up just a little bit saying it … When he looks up at the stage with reverence and awe and utter love, even though he’s been at it for years … 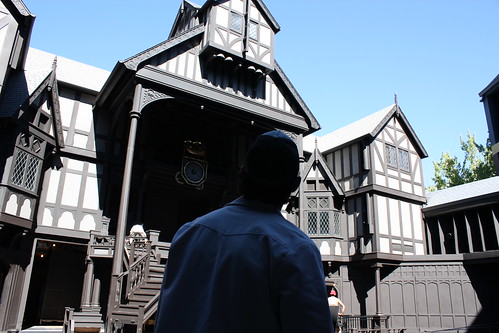 Like I said, it will be very hard not to fall in love, at least a little bit. But try. Do not, for example, shout that you want to have his babies. Or giggle like a school girl whenever he looks in your general direction. Remind yourself that you can’t love an actor, because you will always come in second.

And if you manage to avoid falling in love with your tour guide, be warned again: you aren’t home free. Because you might just fall in love, all over again, with theater in general. You’ll remember the times you spent on stage, decades ago, and feel that strange tightening in your throat that longing always brings. And you’ll sadly think that it’s too late – that the decisions have been made … and being a writer isn’t all that bad, anyway.

Inevitably, this leads to you thinking about the play you’ve always wanted to write, about the young Jewish man who decides to spend Christmas with his new girlfriend’s crazy Catholic family (Write what you know, kids. Write what you know). And you might get quiet as you think about the stage version of your play, and wouldn’t it be neat if OSF picked it up, and if, say, you got a tiny bit part because you wrote it after and …

Later, these feelings will pass. The endorphins subside, the tightening in your throat goes away, and you remember, vividly, the fickle mistress that theater can be. She’ll work you to death, pay you nothing, break your heart and tease you along … and yet you keep going back again and again. That’s the allure of the stage. The closer you get to it, the worse it is. And the backstage tour brings you very, very close to it.

Take it, by all means, because it’s wonderful and magical. But don’t say I didn’t warn you.