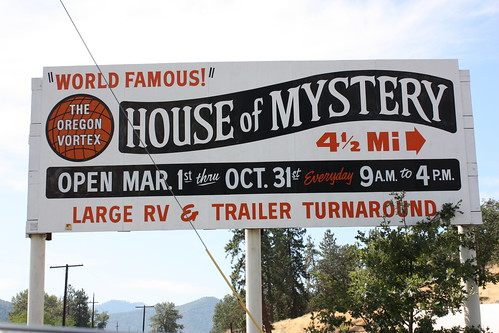 Notice that "World Famous!" is in quotes.

Here’s the thing: I love kitsch. I love dorkiness. I love things that would make other people cringe with embarrassment, roll their eyes, and otherwise want to storm out of the theater/museum/restaurant. It brings me such gleeful joy. Like children on leashes and chocolate cigarettes, I think not of the negative connotations and assume that they exist only to make me happy.

So when I heard about the Oregon Vortex and House of Mystery, I was overjoyed. Delighted. Thrown into a state of dorky ecstasy that I hadn’t experienced since … well, since we saw John Stamos on Broadway (I mean, seriously, I DARE YOU TO NAME SOMETHING MORE MAGICAL). And yet, when we finally got there?

Like a rain-soaked bottle rocket, it was a complete and utter dud.

And believe me, if there was fun to be had, we would have had it. Our tour group was filled with people our age (including one guy who was so damn enthusiastic, I thought he had been planted by the owners) as well as a very energetic guide.

But I’m getting ahead of myself. I suppose I should first explain what the Vortex is. Here’s a paragraph taken from its official webpage, under the the title “Scientific Info”.

The Oregon Vortex is a spherical field of force, half above the ground and half below the ground. The word “vortex” simply means a whirpool of force, like a whirling mass of water, especially one in which a force of suction operates, such as a whirlpool or a whirling mass of air, especially one in the form of a visible column or spiral, such as a tornado.

Um … yeah. Let’s pretend we bought all of that. We then have to believe (for reasons that are never really explained other than attributing them to “they mystery of the vortex”) that objects shrink and grow within this area. Because of … the vortex bends magnetic fields or something. And it has nothing to do with laws of perspective!

Gah. Part of the problem is that the explanations make so little sense, it’s difficult to argue with them. For example, consider the following argument:

This sentence, while ridiculous, can easily be argued, because if someone has a cat, it is, by definition, a cat and not a dog. However, what if someone makes the following claim:

“There’s too many apostrophes in this muskrat.”

Your head just exploded, right? There’s too many things to refute, that you simply give up and lie down. This is the reason why Fox News and the Oregon Vortex are so successful. No one has to the energy to explain all the things that are wrong with their thought processes, and instead, we go take a nap. 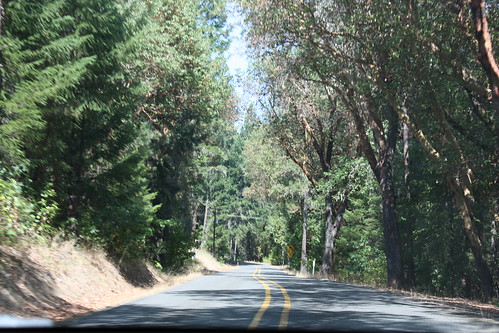 The drive up to the Oregon Vortex. It was pretty isolated, and to paraphrase Rand: "If we hear banjos, we're leaving." 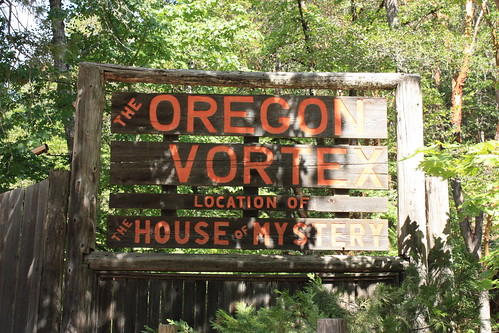 At this point, as a lover of kitsch, I was excited. Disappointment soon followed.

The attraction consists of the following: a plot of land (including a bunch of trees) that supposedly are under the influence of “the vortex”; a house that reportedly slid off its foundation, and now rests at an odd angle (this structure is now known as “The House of Mystery”). Note: If a collapsed house is all it takes to charge admission, I’m going to make a fortune off of my aunt’s old place in Kent.

But really, it’s all an optical illusion.

The broom really does stand up on its own, but as the tour guide explained, most brooms will do that with a little practice. It did look neat, though. I will give them that: 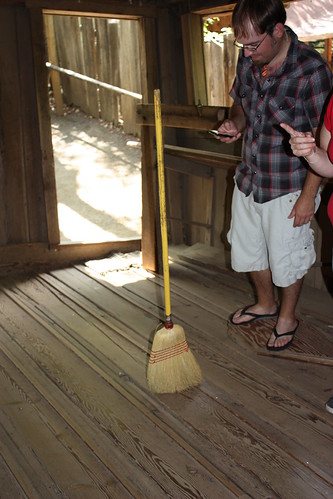 Seriously, a broom can accomplish what several drunks I know cannot.

But the big mystery of the Vortex is how it makes objects shrink and grow as they move along the … um … magnetic lines? Lines of the vortex? Something like that. The tour guide had us each stand along a board in pairs in order to illustrate this phenomenon.

First, the smaller of a pair (in our case, always a gal) would stand on the left, and the guy on the right. Even under normal circumstances, he was taller than her already. But under the “influence of the vortex” he BECAME HUGE (that’s what she said). Behold: 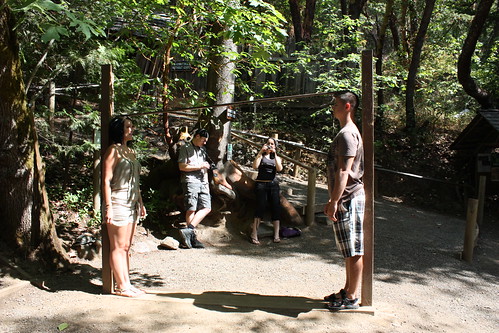 Nothing too strange here, right?

Even more amazing when they switch places … 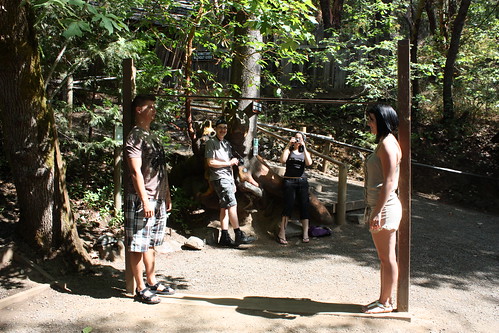 As they switch places, it looks like girlfriend has grown substantially. Or boyfriend has shrunk. Either way. Keep in mind the pillars against which they are standing are the same size (the tour guide even measured them to prove this to us). The guide talked about how amazing and mysterious it all was – I mean, even the wooden pillars against which they were standing appeared to be two drastically different sizes.

Um, yeah. Of course they do. Because one is much more closer to us than the other. Look at that second photo ago. Check out the distance of the girls feet to the edge of the photo. Compare it to the guy’s feet and the edge. She’s closer to me, and therefore looks bigger. This is a basic rule of perspective. Sadly, it’s not magical or mysterious or the work of ghostly forces.

The folks over at the James Randi Educational Foundation do a far better job of explaining the tricks behind the Oregon Vortex than I ever could. They even recreate the growing/shrinking trick in their own vortex-free kitchen, with identical results.

In the end, the Oregon Vortex is all about perspective, in every way possible. The mysteries are merely optical illusions. And they can be fun, when you realize that they’re just that. But if come expecting something mysterious and un-earthly … well, that’s the wrong perspective to have. You will likely be disappointed. And if you know anything about physics, that’s doubly true.

Rand and I fall firmly into that latter category. On the plus side? We have a pretty good sense of humor. So even though it was lame, we managed to have our share of stupid, dorky fun … 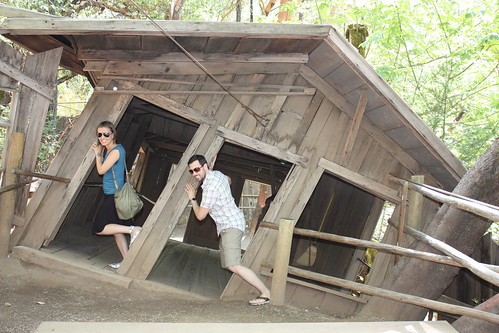 But we don’t need a vortex for that.

The Oregon Vortex is open 7 days a week, from March 1st to October 31st. Hours are 9am to 4pm (and until 5pm during July, August, and September). Admission is $9.50 for adults. It is located just north of Gold Hill, OR. If you hear banjos, run like hell, and don’t say I didn’t warn you.