I have a lot of friends who make white van jokes. I mean, we all do, don’t we? Laugh about the nondescript white van that’s lurking around our neighborhood, though in the back of our minds we keep an eye on it, because if some kid disappears, it’s the first thing we’re telling the police.

But such paranoia is wrong, isn’t it? I remember my mother scribbling down license plate numbers and staring at people from a distance, trying to assess whether or not they were child molesters simply by looking at them (and while I have no definitive word on her success rate, I’m going with “no more than average”). I try intently to not be as worried or as hypochondrial as she – a white van, I tell myself, is a white van.

So when I saw this somewhat creepy vehicle parked on a residential street in Ashland, I fought against my mother’s ingrained impulses, and remembered that it was simply a someone’s rundown mode of transportation. Nothing more. 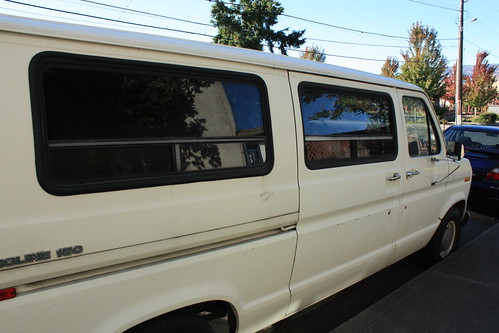 I mean, it has windows - you can't kidnap someone in a van with windows, right?

Of course it wasn’t some sort of hellish cab, ferrying Eastern European women across the country as part of an evil sex trade operation. Nor was it driven by some sort of monster-clown, luring small children inside with the promise of sweets, only to later devour them whole (I might have just mangled the plot to “IT”).

No … It’s just a van! A perfectly innocent van! Except … what’s that written on the side? 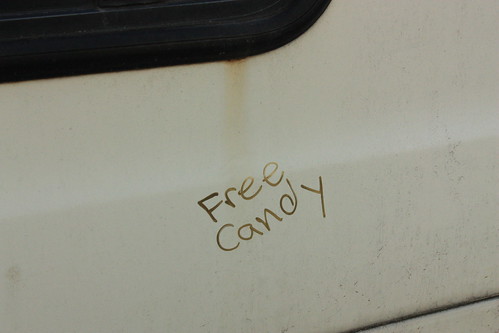 GAH! WTF, creepy white van? Seriously. Even if the driver wasn’t responsible for that note (and I doubt he/she was – more likely someone with a warped sense of humor) why wouldn’t he/she clean it off? Whatever – I’m staying the hell away from it … but not before taking down the license plate number.