It’s been a bit serious here on the blog over the last few days, and it seems a bit of levity is in order. After all, it can all be nudity and violation of inner sanctums, can it? No, no. Sometimes we need to throw a bit of idiocy into the mix, too.

I was doing some searches on Google the other day, because, as many of you know, my geographic knowledge is more than a little lacking. I can get lost inside my own closet (which, in my defense, is a walk-in). So I was delighted when I saw that the Google Suggest box that dropped down when I was typing revealed questions from people who were, to put it delicately, far stupider than I have ever been in my life. Let’s take a look at some of the suggestions I encountered …

I hear they're very clean and loyal.

Things started out innocently enough. The phrase “Why can’t I own a Canadian?” became popular after idiot radio personality Dr. Laura claimed that homosexuality is immoral according to the Bible. Someone kindly wrote a letter to her, illustrating what happens when we take scripture too seriously…

Lev. 25:44 states that I may indeed possess slaves, both male and female, provided they are purchased from neighboring nations. A friend of mine claims that this applies to Mexicans, but not Canadians. Can you clarify? Why can’t I own Canadians?

I mean, it’s not like the people doing these searches actually have some weird, completely inaccurate impression of what Canadians are like, right?

I've heard Canadians can't lie, so they'll probably tell us if they are.

Canadians can blame the good writers behind How I Met Your Mother for spreading this rumor. What’s most surprising is that there are folks out there who know so little about Canada that they needed to go online to confirm this point. I mean, DUH, folks. OF COURSE Canadians are scared of the dark. It’s part of why winters there are so unbearable. Everyone knows that.

But, moving on, the searches show people striving to “learn” about other cultural groups, too … 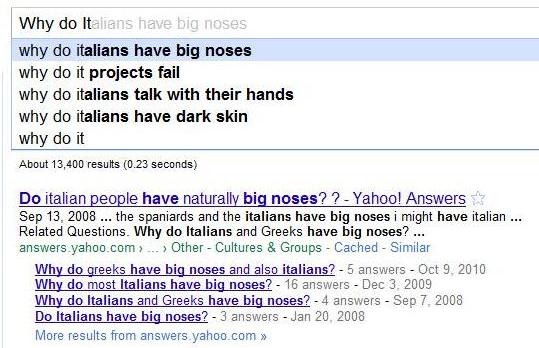 Just because it's true doesn't mean it hurts any less.

Believe me: this American DOESN'T.

While we're on the topic, why don't dairy-free desserts have dairy?

At this point, I seemed to be covering only misconceptions about ethnic groups. While hardly a good thing, this isn’t unusual, right? Hopefully, though, the questions about actual geographic locations wouldn’t be so woefully misinformed …

I know one girl who will cut you for saying this.

Horrifying? Absolutely. But perhaps I can forgive it? Singapore is a small country, after all. So is New Zealand. I mean, it’s not like they’re continents or anything …

Okay, FINE. So clearly we aren’t great at international geography. When I was an intern at the news station, I had a guy call up and yell at me because we reported that there were 7 continents in a news story (and not 8, as he believed there should be). But, I mean, that’s not our fault, right? It’s because our country is HUGE. And we spend so much time as kids learning about all the different states and their capitals. All 50 of them! That’s a ridiculous amount. So while we don’t know about what’s going on in the rest of the world, we’ve got the U.S. down pat, right?

The other questions suggested are equally alarming.

But clearly I’m being overly judgmental. After all, the folks behind these searches may not be well informed, but they’re at least making an effort to inform themselves, aren’t they? They’re doing research and trying to find the answers to their questions. They’re trying to improve themselves, which really is the first step in making the world a better-

Because necrophilia is okay but sex before marriage isn't.

Sweet lord, nevermind. Just keep them on the internet and away from me.