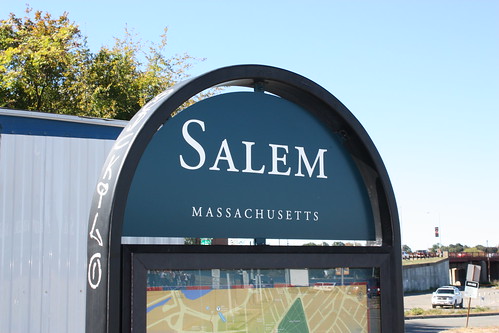 Please don't inform me of the correct date.

Ah, folks, it’s that time of year again … the leaves are changing, there’s a chill in the air, and one of my favorite holidays is just around the corner. So what better way to start your Halloween festivities that to talk about the spookiness of Salem, Massachusetts?

Wait, what? It’s November? Halloween was weeks ago?

Here’s the thing: it’s been a busy few weeks. Very, very busy. And I’m woefully behind. So my post about Salem, which I had hoped would be published sometime before Halloween (a.k.a., the town’s busy season), is going up terribly, terribly late.

Or, as I like to think of it, VERY, VERY EARLY. After all, Halloween is nearly a year away, and here I am giving you tips about where you should go! Amazing, right? Sigh. Maybe not. But I’m hope you’re buying this. Because it’s a dreary Tuesday morning, and I am contemplating having just had cookies for breakfast. I am not up for an intellectual debate right now.

Whatever. On to Salem!

If you are in Boston, Salem is a relatively short train ride away – it only takes about 40 minutes, and the train we were on was delightfully ancient and sticky. If you travel anytime around the month of Halloween, it gets incredibly crowded, and you will have intimate knowledge (whether you want to or not) of the folks who sit next to you. This is totally okay if you find yourself squashed up against someone you like … 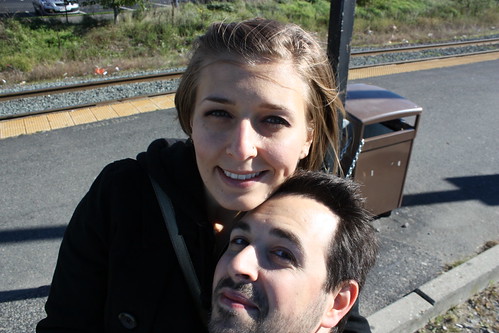 Another adorable photo of me and my husband. GAG. 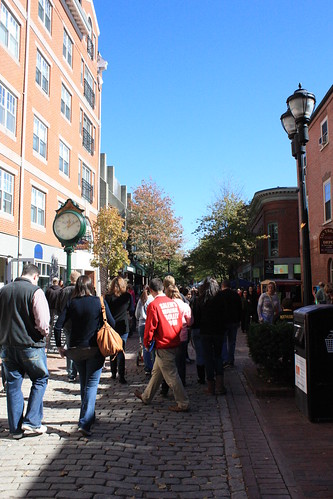 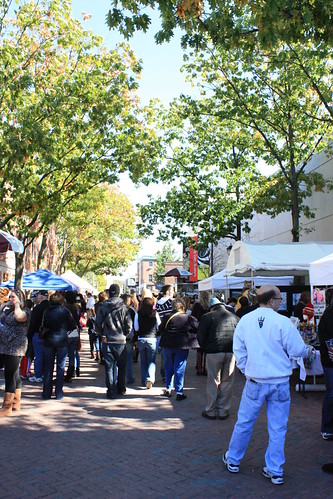 If you go, be prepared for an onslaught of kitsch. Salem has absolutely one thing going for it – the accusation, trial, and execution of individuals for witchcraft. From February 1692 to March of the following year, 19 people (14 women and 5 men) were hanged on the grounds that they were witches. It left me, as a visitor, kind of conflicted. Was I making light of the deaths of innocent people? It doesn’t help that the town taken has taken this rather morbid premise and ran with it, celebrating things that have little-to-nothing to do with the witch trials … 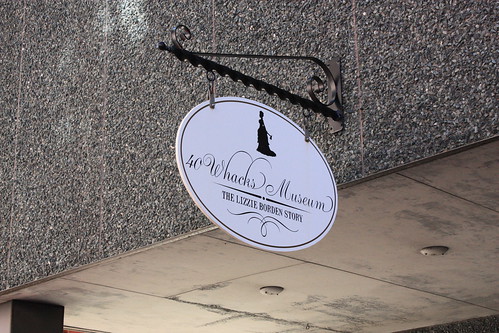 I can't tell if this is just bad taste, or hilarious. Maybe it's a bit of both. 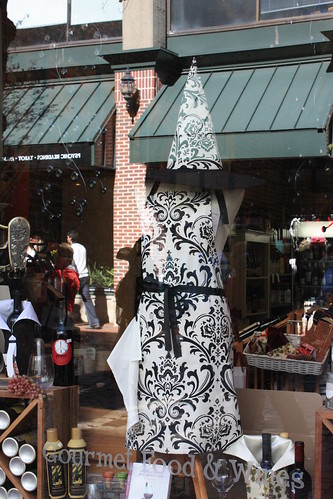 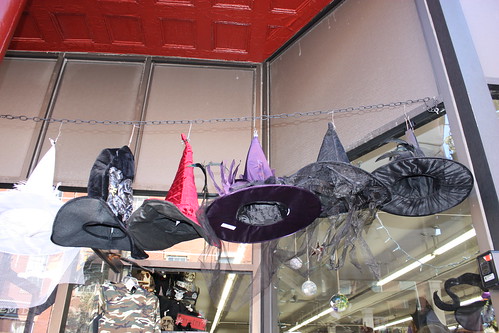 While I enjoy a good dose of kitsch as much (and probably more than) the next girl, it was overwhelming, and at times seemed to be in poor taste. There were so many haunted houses and exhibits that it’s actually almost impossible to find anything legitimately pertaining to the witch trials. As we walked by signs advertising “Frankenstein’s Laboratory” and The Salem Wax Museum, Rand asked me what monsters had to do with the Witch Trials.

“Seriously, why do I keep seeing Dracula everywhere?”

I shrugged, and didn’t bother explaining to him a view I have held since childhood, which is that Dracula and the generic green-faced witch you see everywhere at Halloween are obviously married. Nevertheless, I understood his point, and I was a little frustrated. I didn’t want to see a haunted house full of plastic skeletons and pre-recorded cat screeches. I wanted to see evidence of what actually happened in Salem.

We stopped at the Visitor Center just off Essex Street, which proved to be a wise move. The staff there was incredibly helpful, and the gal who I talked to gave us some great vampire-free suggestions. Of the many witch museums in Salem, only the Salem Witch House is a legitimate historical attraction (The Salem Witch Museum, The Witches Cottage, The Witch History Museum, The Witch Village, and The World of Witches Museum are not). 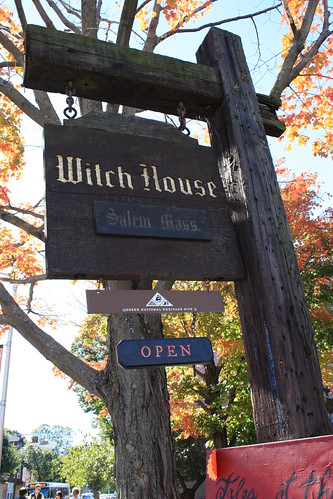 The house itself is fairly interesting and full of historical significance (and believe me – few things are in Salem). It’s one of the only structures still standing that has direct ties to the Salem Witch Trials. The home belonged to Judge Johnathan Corwin, who investigated the accusations of witchcraft and served as one of the judges on the court that would later convict 19 individuals. 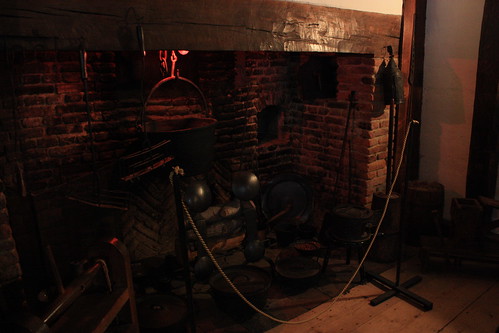 They've decorated the inside of the Witch House with furnishings indicative of the time. 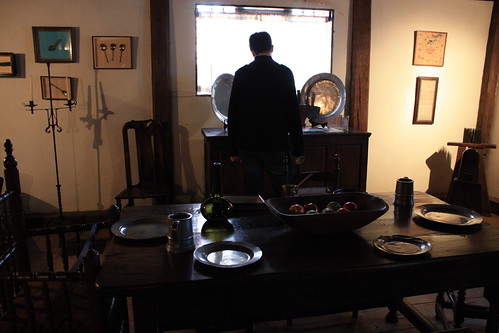 The main parlor of the Witch House. 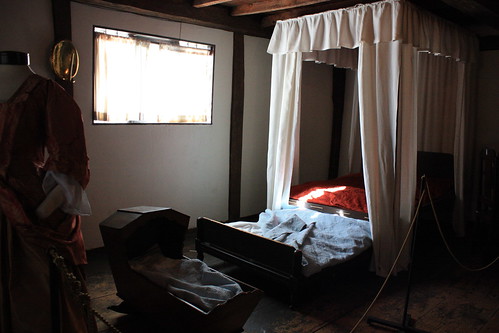 Apparently maids or small children would sleep at the foot of the master of the house's bed. AWKWARD.

After visiting the witch house, we headed over to the Old Burying Point Cemetery and the Witch Trials Memorial. As the gal at the visitor center explained, the men and women who were executed during the trials were not buried, but instead their bodies were dumped somewhere. Had they received proper burials, they’d have been laid to rest in the cemetery. The Witch Trials Memorial opened in 1992 just adjacent to the cemetery. It consists of a low stone wall and stone benches engraved with the names of the accused and their dates and means of execution. 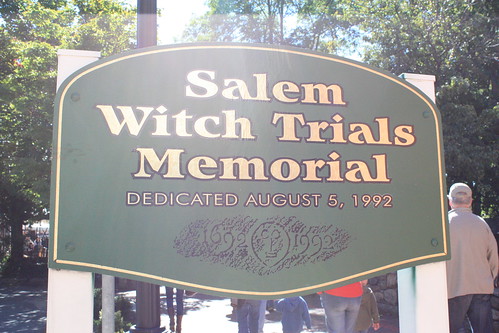 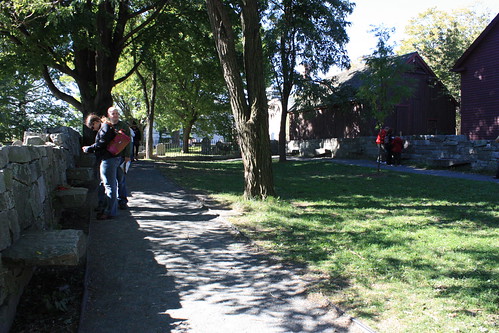 I was actually surprised by how touching it was. I previously regarded the Witch Trials the way I do most injustices of the past – the temporal distance numbs any strong emotional response I might have, and I simply shrug and chalk it up to how humans generally suck. But seeing the names carved in stone made it seem all the more real and tragic … 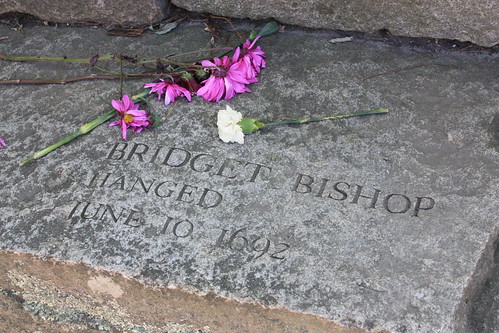 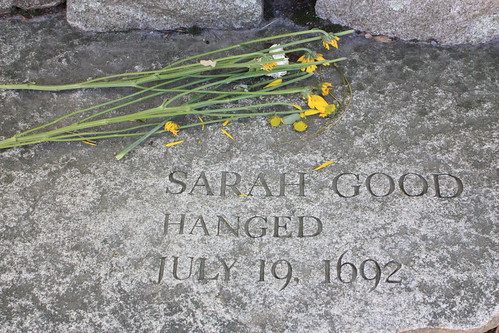 It’s hard not to feel saddened at the sight of it.

The cemetery itself is worth a visit as well, though it lacks the same emotional resonance. It’s funny: folks leave flowers at the memorial, but the graves are largely ignored. I wonder if the wrongfully accused had known how they’d be remembered, if it would have eased the pain of death. I’m going with doubtful. 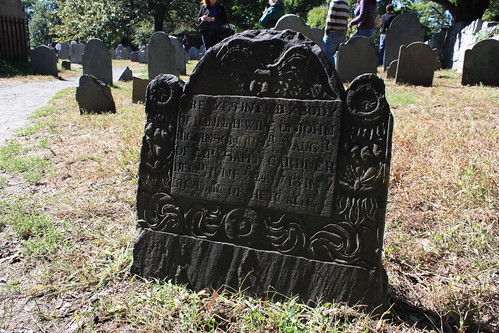 I seem to spend a lot of time in cemeteries whenever I'm in the northeast. 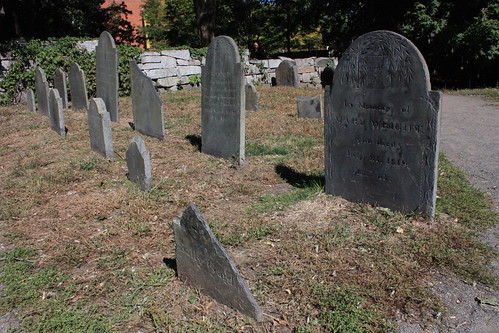 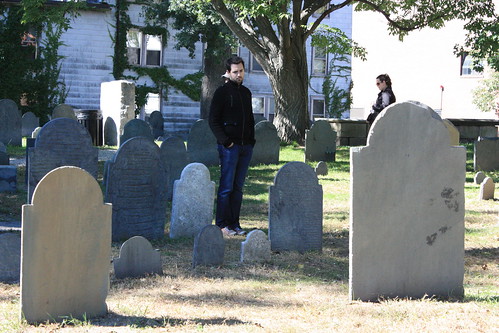 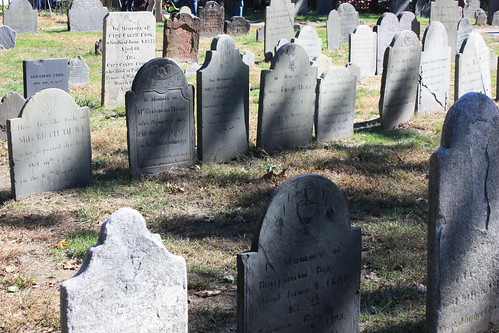 Rand and I had hoped to visit a few more spots in Salem: we had heard that the Salem National Maritime Historic Site (despite having a terrible name) was worth a visit, as was the Old Custom House. You can also pass by the house where Nathaniel Hawthorne wrote The Scarlet Letter. Unfortunately, Rand wasn’t feeling 100%, I was still recovering from my accidental sedation, and if we missed the next train to Boston, we’d have to wait another two and half hours. So we cut our trip short and headed back.

Was it worth the trip? Absolutely, but I suggest going in October: that’s when the entire town is alive and celebrating, and despite the kitsch, it’s sincerely spooky and fun. It’s a strange mix: the dark injustices of the past giving life to Salem’s present day tourism. I tried not to think about how messed up it all was, and enjoy the ride. But that’s how mass hysteria starts in the first place, isn’t it? By people not thinking.

Perhaps I should have taken things more seriously … 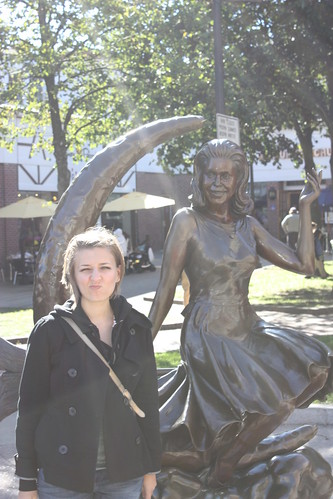 There's a Bewitched statue in the center of town, donated by the folks at Nick-at-Nite. Notice my half-assed attempt at nose twitch.

… but that same criticism could be leveled at the entire town of Salem, too.