Earlier this week, I started the Facebook Group Say No to Full-Body Airport Scanners. I found this picture online, and decided to use it as the group’s profile pic. Since the image seemed a bit too revealing, I added some black bars …

–
A while later, someone informed me that the pic was a hoax (it was a tweaked version of stock-photo of a woman) and not actually from a back-scatter machine. Journalistic integrity being what it is (and sprinkled with a generous dose of Catholic guilt), I replaced it with this one that you’ve probably seen before:

Why is she smiling? If I were this naked and the world saw it, I would NOT be smiling.

Now, here’s where it gets hilarious. The above photo has been seen everywhere: on numerous blogs, on the ACLU’s website, and on news sites from here to Australia.  It’s from the Associated Press, taken during a demonstration of the backscatter machines in 2003. It’s an accurate representation of what TSA-holes are seeing when you walk through one of the full-body scanners at the airport.

So I decided to use the above image for my Facebook group. And when I did, it was removed, with this message: 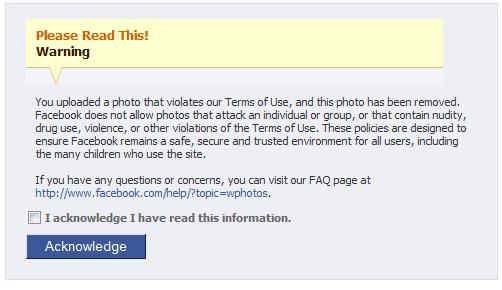 They allowed it to remain (in miniature) as a profile pic, but they deleted the larger version. Based on the warning I received (that images that contain nudity, drug use, or violence are not allowed), I’m guessing it was because the photo revealed too much skin.

Does anyone else find this royally and utterly effed up?