I would be remiss if I wrote about Bulgaria and didn’t mention Paris. 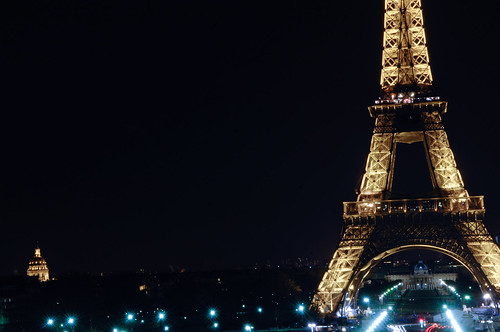 Photo by fliplivin, courtesy of flickr.com

Um, no. Not that Paris. Try again. 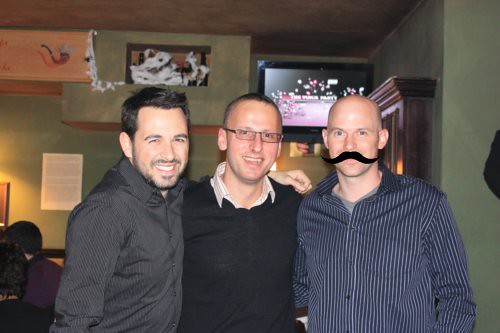 He's the one on the left. With the moustache.

Yup. That’s him. I didn’t actually ask him whether or not I could use his photo on the blog, so I figured I’d give him a mustache, making him slightly harder to identify. Because there are probably tons of guys named Paris running around Bulgaria, and with his new-found anonymity, he could be any one of them.

Either that, or I really, really wanted to use Picnik’s new mustache feature. But I digress.

Paris is in the tech-industry, originally from Louisiana, and has been living in Sofia for a while now. When we first met him, I was kind of taken aback. We hadn’t been back to the states for a while, and the last thing I had expected was an American accent. I don’t suppose that homesickness could have set in that quickly, but when he spoke, I wanted to hug him.

Now, don’t get me wrong – the locals were fantastic. Everyone we met was warm and welcoming. The thing is, we needed a bit of a translator. Someone who could put things in terms we understood. We all love a little adventure. A little bit of uncomfortableness, of newness, is good for the soul and the brain, and occasionally even the lower intestine. But after a while, you just need a small dose of home. Someone who gets your jokes when you climb into a car in eastern Europe and shout, “PUT IT IN H!” Even if they want to talk about the Saints.

For Rand and me, in Bulgaria, that person was Paris.

He translated for us – everything from signs to menus to cultural habits. When I teased him for ordering milk, he explained that he was actually drinking a yogurt-based beverage called ayran (I promise, that link doesn’t go to a white supremacist website, no matter what Google would like to suggest). It (the drink, not white supremacy) is common all over Turkey and Bulgaria, and usually eaten at the start of a meal. He encouraged us to try some. 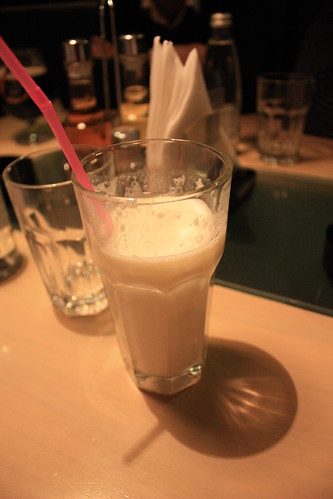 And he suggested we order shopska salad, which is one of the more traditional ways to start a Bulgarian meal. It’s sort of like a Greek salad. Or, as someone in Bulgaria will tell you, it’s the other way around: a Greek salad is very similar to a shopska salad. Basically, it’s chopped cucumber, tomatoes, some onions, occasionally some parsley or bell peppers, covered in fine grating of a feta-like cheese. 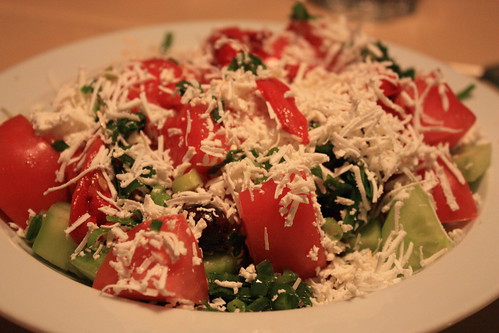 Having had some questionable experiences with salads in most parts of Europe (mainly, they rarely include veggies. Ponder that.), I can safely say we never would have ordered a shopska had it not been for Paris’ suggestion. And now that we had tried it, we proceeded to order it at every meal.

Paris insisted on taking some time on the weekend and showing us around Sofia. He even introduced us to his wife (who was all kinds of gorgeous) – she’s from Bulgaria, so she was able to tell us even more about her country’s history and culture (and she wasn’t freaked out by our brash, noisy American ways! Yay!), as well as their little daughter. Check out the family resemblance: 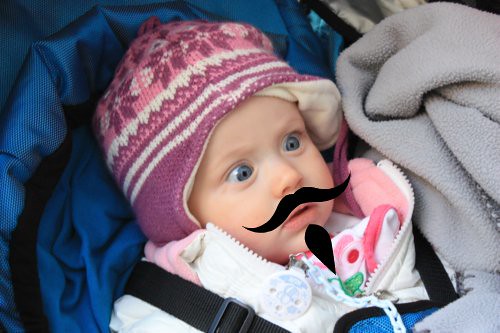 They showed us around downtown Sofia on what turned out to be a gorgeous day. We stopped by the Alexander Nevsky Church – the largest church in Bulgaria (and all of the Balkan peninsula – a distinction which would have resonated better with me if I didn’t suck at geography). 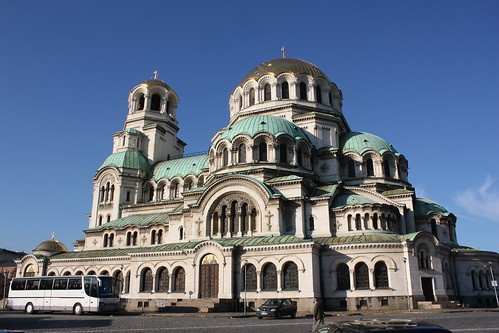 The thing is massive. You can see it from essentially anywhere downtown. 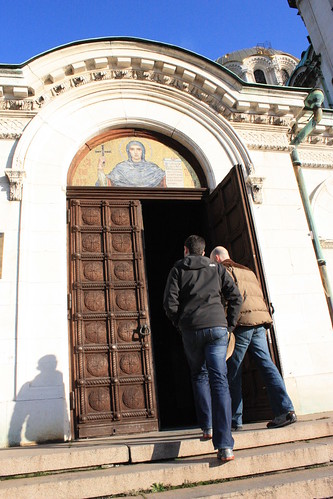 Sadly, photos of the interior are prohibited on pain of conversion to Christianity. I took some anyway: 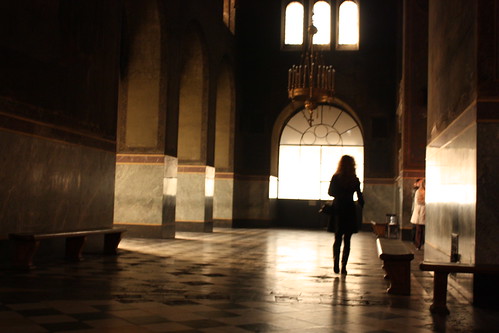 They came out crooked, but that's what happens when you surreptitiously snap pictures from your hip. 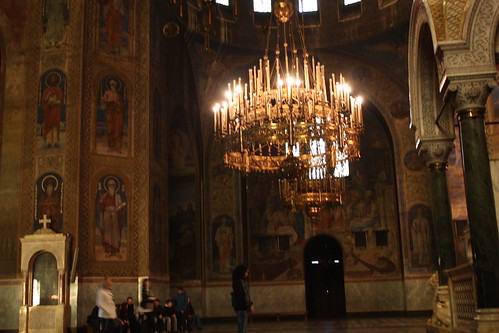 I thought I was going to get busted and yelled at by a priest ... for, like, the 80th time in my life.

We stumbled through an open-air market in the center of town – the sort of thing that locals generally ignore, and tourists get sucked into. So, naturally, we got sucked in. It was fascinating – full of old relics from the war and Communist rule … 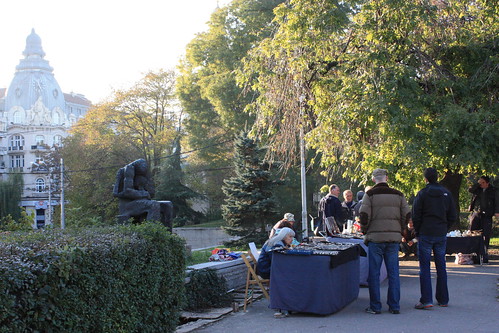 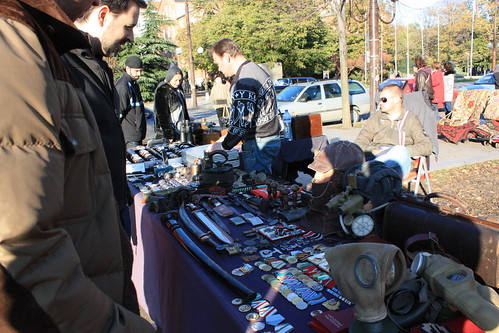 And all of it was dirt cheap. I'd have bought something, but I was worried it would have been tainted with mustard gas. 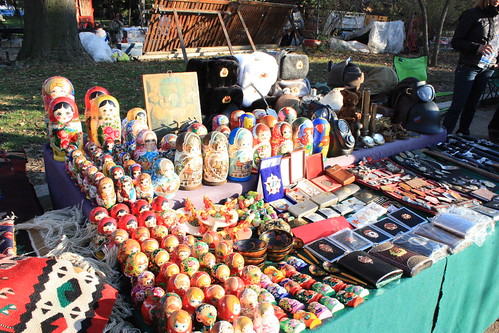 This looks like the "Communist" section of the Oriental Trading Co. catalogue.

It was all very sweet and kitschy unless you looked closely. Then it wasn’t. 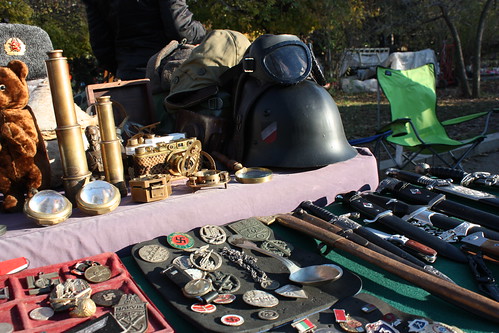 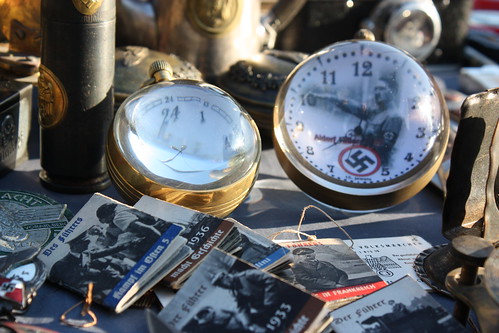 And, since we heathens hadn’t gotten our fill of church-going on that day, we popped into the Russian Orthodox Church. 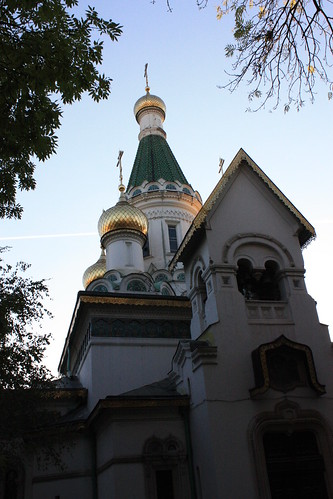 We were lucky enough to stumble upon it in the middle of mass. The choir was chanting, as a priest walked across the crowded congregation, waving incense over everyone. Rand described it as one of his favorite travel experiences of the year. I maintain that his fascination with churches and mass comes from never having had to sit through service on a sunny Sunday as a kid.

We wandered around until the sun set and it started to get cold. 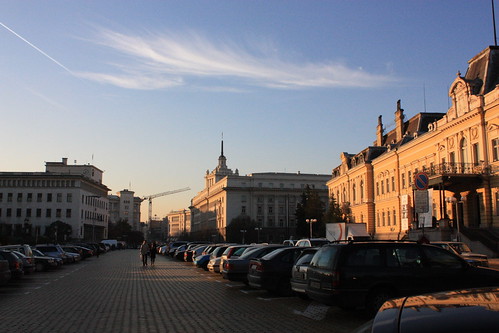 We had seen the city, and spied on the locals in their natural environment … 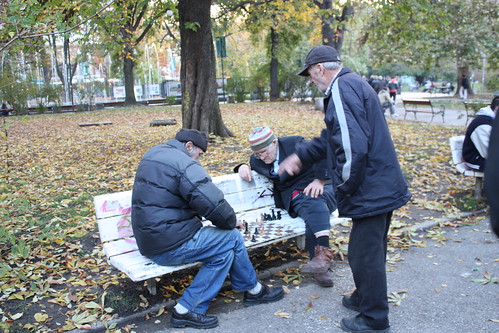 Three people playing one game of chess. I thought only the Italians did this.

And Rand made a friend who was rightfully suspicious of him. 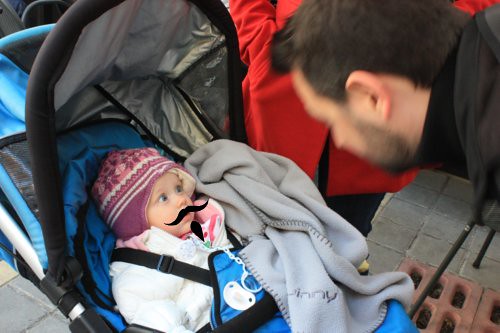 I should probably get a day-job.

All in all? A lovely day in Bulgaria, courtesy of Paris. 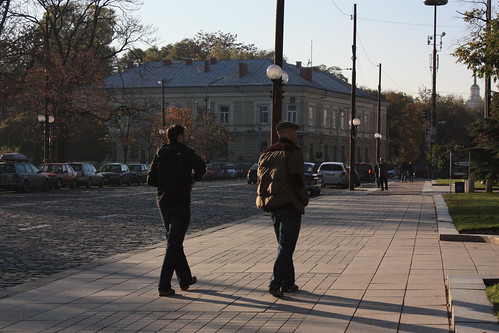 And, of course, his family. 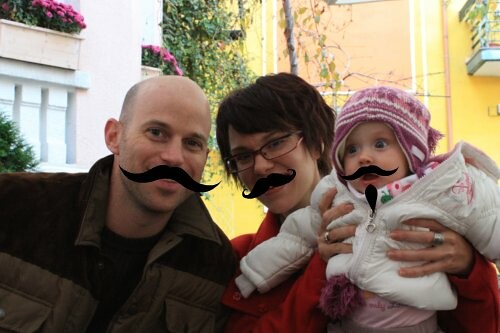 I would apologize for this, but it's just too awesome.