I tend to make rash decisions. And once I’ve made up my mind about something, there’s no changing it. There are certain things that I loathe, and even though I might have forgotten why I loathe them, I continue to do so. Because my mind has been made up. There’s little indifference in my world. Rarely am I undecided on anything. Which is why my feelings towards Bulgaria, gathered over the course of our trip there a few months back, are so remarkable.

Here’s the thing: I think I hated Bulgaria.

And yet, when I type that, I wince a little. When I think of the amazing people we got to spend time with, of the quirky and delightful traditions of which we partook, I figure I must be wrong. I must have liked Bulgaria. We were treated so nicely by our hosts. People took us out and showed us around. They introduced us to their families and let us hug their children.

And I conclude that Bulgaria really was wonderful.

Then I remember how out of my comfort zone I was. How powerless and frustrated I felt after we got ripped off. How annoyed I was when I later asked the hotel concierge to call me a cab, waited out in the cold for it, and had some douchebag who looked like he just stepped off the set of Jersey Shore steal it from me. How I nearly lost it when I told the concierge what happened, and she proceeded to scold me that I needed to be more aggressive. Right. Aggressive. Against a guy who’s probably a member of the mafia.

And again, I think perhaps I hated Bulgaria.

My mind switches back and forth on the subject so quickly, I feel like I’m having an argument with myself. I imagine myself like Gollum in the Lord of the Rings (yes, I just made a LOTR reference. DEAL WITH IT), fighting with, well, Smigel, on whether or not he should betray Frodo and Sam. It just goes back and forth, back and forth …

No! How can that be possible? The people were so lovely. I left feeling like I had made friends. There are people there who, right this minute, I miss. I should go visit them.

Gah! And deal with the corrupt cabbies? Absolutely not.

Oh, but the food was great.

Except for the fact that every restaurant had a cloud of cigarette smoking hanging over it. EVERYTHING TASTED LIKE TOMACCO.

Well, it was really affordable.

Yeah, when people weren’t trying to rip you off.

So … this post may be inconclusive at best. Which is remarkable for someone like me. Let’s talk about the good and the bad, as I try to sort my feelings on the matter.

When we arrived in Sophia, we found it was freezing cold. Literally. We watched snow turn to sleet. And when the sun went down, it was positively frigid. 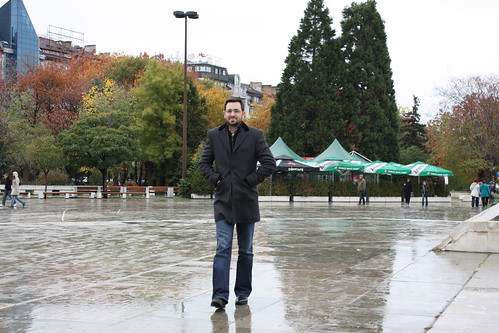 Rand wearing his fancypants coat which may or may not keep him warm (but looks damn dashing).

On the plus side, cold weather makes for nauseatingly adorable photos. Check it: 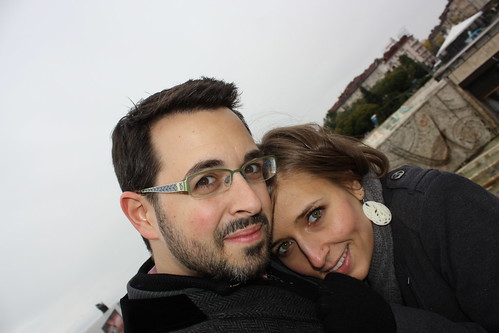 See? I bet you are barfing with the cuteness right now.

Oh, and then there’s our hotel room. We stayed at one of the best hotels in Bulgaria. Our room was enormous … 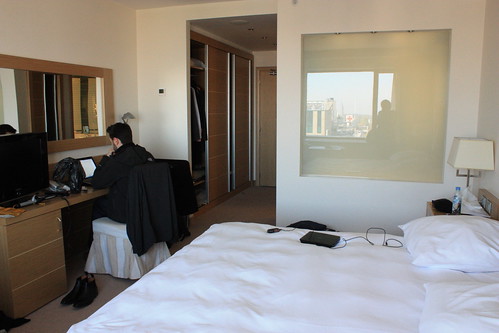 This is after we kind of mucked it up a bit.

Unfortunately, it wasn’t entirely an entirely sound structure. I managed to rip the towel rack out of the wall by, of all things, putting a towel on it. 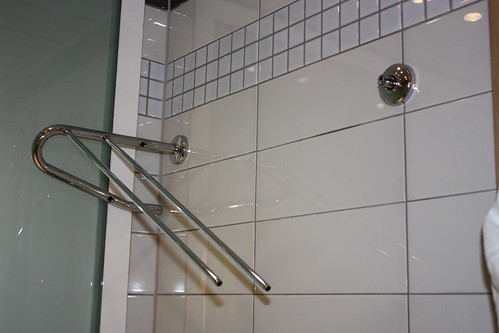 Rand heard lots of screaming and the sound of falling metal. Which, in all fairness, are sounds I usually make in the bathroom. 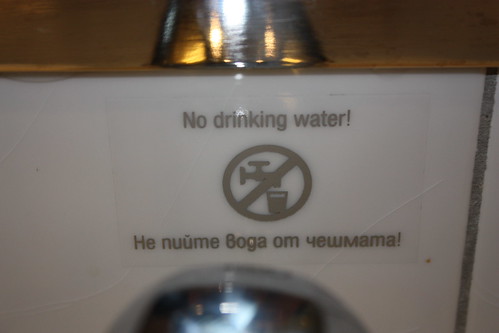 Let’s move away from non-potable water and discuss Bulgarian cuisine, which was really quite impressive. It’s incredibly inexpensive to eat out, but the quality of the food is stellar. The cuisine is similar to Greek or Turkish, with a bit of a Russian influence. In other words, all the fantastic pastries and roasted meats of Eastern Europe, plus you actually get fresh vegetables. 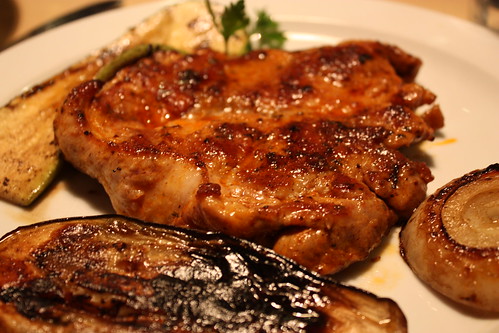 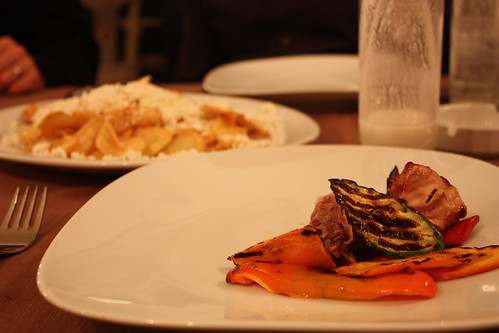 Of course, it would have been far tastier had everything not tasted like an ashtray. Because over half the population of Bulgaria smokes (it’s second only to Greece in EU countries with the highest number of smokers). I know, I know – free will BLAH-BLAH-BLAH it’s their bodies BLAH BLAH BLAH people can do what they want. Right. Except that, in response to having such a large population of smokers, Bulgaria has gone directly against the EU’s recommendations, and nixed a  full smoking ban. The result is that, with the exception of public transport and governmental buildings, people can, and do, smoke wherever they want. My lungs still hurt thinking about it now.

It killed my and Rand’s desire to go out. Even though, when we did, we found that everyone we encountered was so damn friendly. Rand organized a meet-up for subscribers of his company’s blog, and every single person we met was awesome. 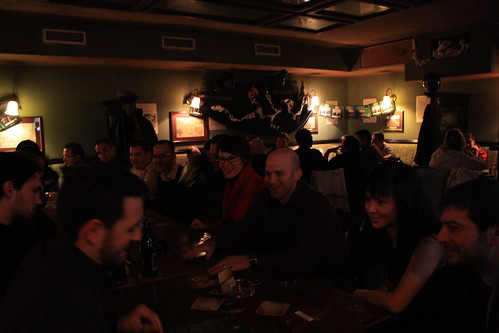 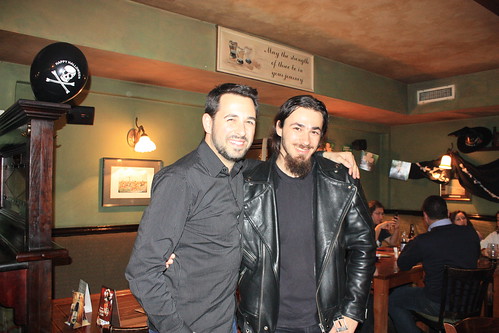 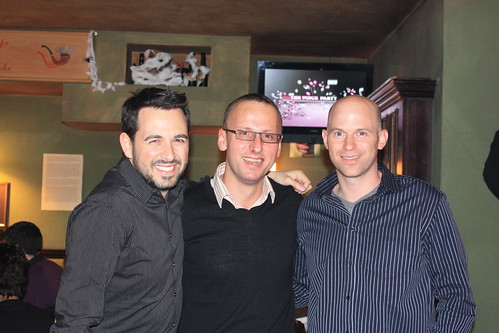 This is all kinds of adorable. 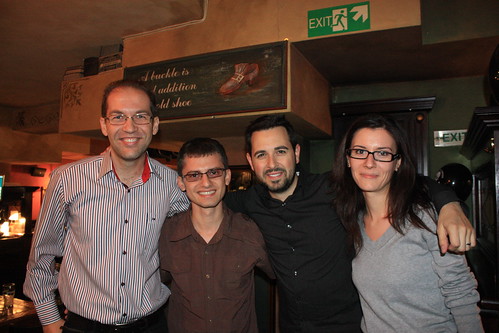 And Rand met a doppleganger: 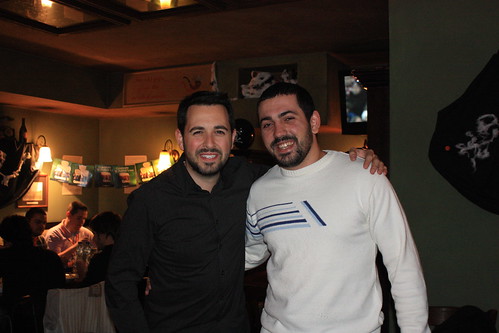 I chatted with a trio of visiting Romanians about the similarities between their language and Italian. I listened to locals tells me about their adventures in America. Rand may have been forced to do a headstand. There was a lot of eating and shouting and drinking. It was not unlike Italy, or dinner at my aunt’s house.

When folks found out about our cab rip-off, they all groaned sympathetically, and apologized (rather unnecessarily). They joined me in lamenting the smokiness of their bars and restaurants. It reminded me of all the times I felt compelled to ask visitors to Seattle their forgiveness for our crappy weather and traffic. We spoke a shared language, one that pleaded: Do not judge me for the sins of my town.

Sins that are, in all fairness, not that heinous. Even as I type up my grievances, I realize how snobbish I sound. “Ew, it was all smoky! Yuk, you can’t even drink the water! That nasty nasty crime boss just stole my cab!” But Rand and I travel a lot, and I feel like I’d be doing a disservice if I wasn’t honest about one thing: we like to be in our comfort zones. We like familiarity in our environment. In the end, that’s why find myself conflicted: Bulgarian on our own was foreign and frightening. Bulgaria in the company of friends and colleagues was warm and inviting.

And so the jury remains out. But I can say one thing definitely: if Bulgaria ever needs a character witness, it has them to spare.