Today’s guest post is by the lovely and talented Nicole, a blogger, freelance writer, and photographer currently living in Spain. Her geographic distance is a bummer: if she lived closer, I’m sure we’d instantly be BFFs, necessitating that we buy t-shirts with both our faces screen-printed on them, and wear them EVERYWHERE. Sadly, her being in Madrid substantially decreases our chances of running around the mall in matching tees.

But, Nik, if I’m ever in your neck of the woods, we are hanging out. And getting ham. (Matching tees optional.)

Living in Madrid for 5 years has taught me many things, but only 4 of them are vital to my survival here:

I’m sure you’re thinking, “What? After 5 years here and all you have learned are to flap your hands around, drive like a dizzy monkey, drink beer, and eat ham?

To those people, I reply, “Yes, it’s sad. But do you know how important ham is to these people?”

So important in fact, an actual Ham Museum exists for those who can’t get enough “Pata Negra” at home, or in the bars, or at the movies, etc. Yes, it is “el Museo de Jamón.” 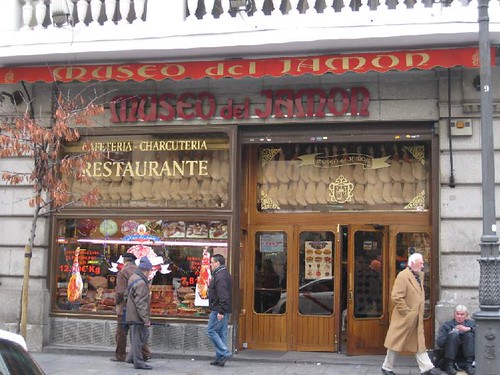 I’ve been to all the other museums here – The Prado, the Reina Sofia, and The Thyssen Bornemisza, but I have to admit that I haven’t actually made it inside the Ham Museum (yet!). Honestly, it’s always jam-packed (ham-packed?) with true ham connoisseurs. Also, it makes me a little nervous to go in because there are a million ham legs hanging from the ceiling. They are just floating above you like little deconstructed pig angels … it’s weird. 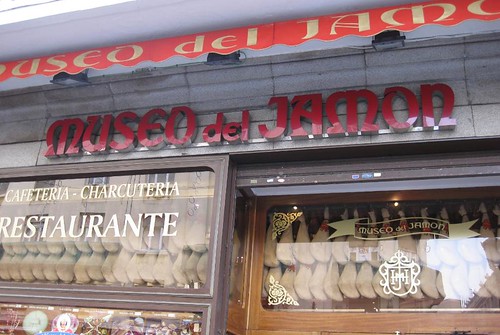 Lately, it seems as if Madrid is all kinds of weird – weird and well, trashy. I’m hoping that I can convince my husband to see two specific trashy sights this weekend. Hopefully, he won’t get the wrong idea of what I mean by trashy … not sexy trashy, but actual trash trashy:

My friend, Lilli, wrote an article about the trash hotel that has been constructed in the center of the city. Apparently, it really is a hotel totally made of washed up beach objects. Gross!

No, really – it’s for a good cause. The hotel is part of a campaign to raise awareness about the delicate state of our beaches around the world. Its shows us that, as beach goers, we should be paying much more attention to the amount of waste we accumulate while tanning our behinds in the Mediterranean sun.

The structure has five hotel rooms where up to 12 people can rest their weary heads and bask in the junky glory that they have played their part in reducing our carbon footprint.  I’m up for going to take a gander while it’s in Madrid, but I don’t know if I’ll be making a reservation soon- it really creeps me out … kind of like Seattle’s gum wall.

A cathedral built out of junk.  Sorry – “recycled building materials.”

So this is one story I can get behind. Meet Justo Gallego. Don Justo entered the Santa Maria de la Huerta Monastery when he was 27 years old. After falling ill with tuberculosis, he was forced to leave the monastery for fear of contaminating his follow monks. (Where’s the faith, brothers?)

Don Justo returned to Madrid devastated but determined to continue dedicating his life to God. So he began constructing a cathedral as an offering to God. His dedication to God is impressive, but what really is downright mind-blowing is that Sr. Gallego has no training in architecture or construction. As his early education was stifled by the Spanish Civil War, he now just lets God lead his way. (Well, God and the many books on cathedrals where one can assume he also finds divine design guidance).

He has been building this cathedral for 50 years. He starts at three thirty every morning. He normally works alone, although he does have some help from his nephews and an assistant that helps with the salvaging. Today, the building is almost 8,000 square feet high and is made of recycled building materials found locally– bricks, tiles, paint buckets, old oil drums, etc.

Just looking at this man brings tears to my eyes. I hope that one day I will learn his secret. What drives a seemingly normal person to do something so remarkable? Where did this idea come from? Isn’t he exhausted? Where does he get his energy?

That’s it – I’m totally dedicating my life to living like Don Justo. In fact, next time I have a dilemma, I’m going to think, “What Would Justo Do?”