The nice thing about the amount that Rand and I travel is that it’s made me less fussy about things.

What? Why are you laughing?

Okay, okay, fine – I’m still difficult about some things. Certain members of my family think I’m an over-privileged brat because a few weeks back, the following expression escaped my lips:

“There is absolutely no way I’m flying cross-country on a red-eye in coach.”

Seriously, who said that? It’s like I was temporarily possessed by someone who was raised in an upper-middle class family. But those weird instances aside, I try to keep my travel expectations within reason.

I don’t mind taking two double beds instead of a king (though, really, I feel badly if one bed remains empty. I’m tempted to rent it out for the night. Fortunately, this has yet to happen, and I don’t have any horror stories about wayward drifters who I’ve let into my hotel room).  I don’t care if the room has a view or not. Or what floor it’s on. I only require it to be reasonably quiet, and clean.

And if I do encounter a problem with my room? Well, it’s usually because something weird is going on. Something so weird that it defies explanation. It’s times like those that my camera comes in handy. I’ve found it’s easiest to just show the staff pictures of the problem rather than try to explain.

I realize that forcing some overworked hospitality industry employee to look at a veritable slide-show of their hotel’s shortcomings is a heinous and awful act, so I try to keep it short and sweet. In this case, it went something like this:

“Hi! We’re in room blah-blah-blah. We stay with you guys often, and usually love your hotels, but we’re having a bit of a problem with this room! There’s cake everywhere.”

This last point caused the guy to pause. I didn’t blame him. 99% of the time, if I say “There’s cake everywhere,” it’s a good thing.

“How was the wedding?”

“Amazing. There was cake everywhere.”

“Did you enjoy your bath?”

“Yes. There was cake everywhere.”

You get the idea. But in this case, there was cake, cake, everywhere, and not a bit to eat (because Rand has prohibited me from eating floor cake. More on that heinous rift in our relationship, later). Behold: 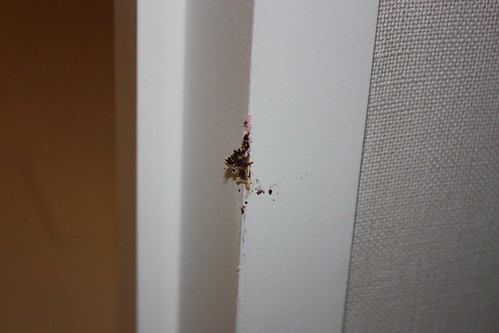 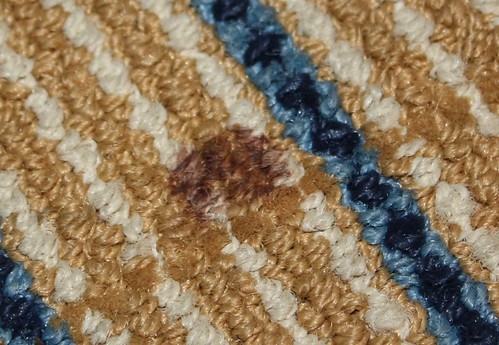 I originally thought it was blood, and freaked out. Discovering it was wasted frosting was only slight less alarming.

Cake in the sliding door grooves on the balcony: 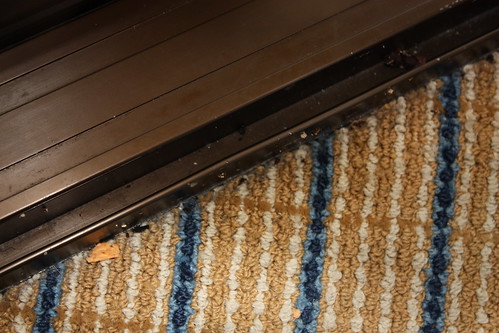 Now, I’ll admit – it wasn’t that bad. Just a bit gross, really. There were cake stains all over the carpet, and while that might be par for the course in our own home and bathroom (don’t judge me) it seemed a bit inappropriate for a hotel room. After all, this was not our cake. I expected the gentleman at the front desk to simply offer to send housekeeping in and give us some free cake, but instead, he gave us a new room.

Which was really nice of him (even if it didn’t include free cake). Bottom line? When you have a problem, it helps to take photos. Especially if it’s one of those strange, tough to explain problems.