We are sitting in a restaurant in Rome. The Peroni Brewery Restaurant, to be exact. Shockingly, it is neither touristy, nor overpriced, nor terrible, but it is overrun with locals and the staff is gruff and rushed. My aunt, uncle, and cousin have come to meet us for a day in Rome, and my aunt suggested we eat there as it was on the way. Rand and I were hesitant, anticipating the Italian equivalent of Gordon Biersch, but once inside, we see that’s not the case. It’s locked in time in the 60s, serving an occasional kitschy German dish alongside traditional Italian ones.

The waiter comes by with the haughtiness and exasperation of someone who knows that the gratuity is included in the bill. My uncle will remind me that this isn’t just because we’re in Italy, but also because we’re in Rome. It’s somewhat like New York – people are rushed, people are busy, people are yelling. It isn’t because they are angry at you (or if they are, it isn’t because it’s personal). It’s simply what life in the city is like. As we rattle off our orders in Italian (yes, Rand included), our waiter seems less disgusted with our table. My uncle’s Roman accent surely helps, as do, I suspect, my cousin’s big green eyes.

My family laughs at my reaction to the service, but I tell them I’m just glad I haven’t been yelled at. It seems that I’m always getting yelled at in Italy … or by Italians (that is another post. I promise you).

I order cacio e pepe pasta – a dish so absurdly simple, I’m wondering why I’ve never ordered it, much less made it. Butter, pecorino, a tiny bit of pepper swirled over fresh pasta. 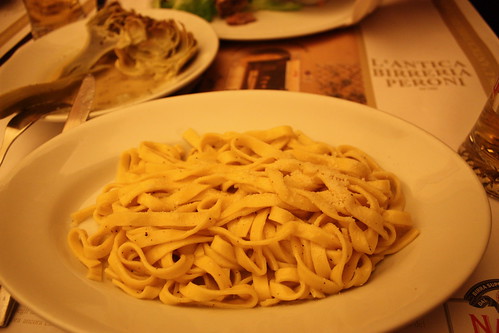 Carciofi romani in the background.

Rand  doesn’t get what the big deal is, but trust me: it is fantastic. My cousin orders the same thing, and my uncle, ever the local, goes full-Roman: 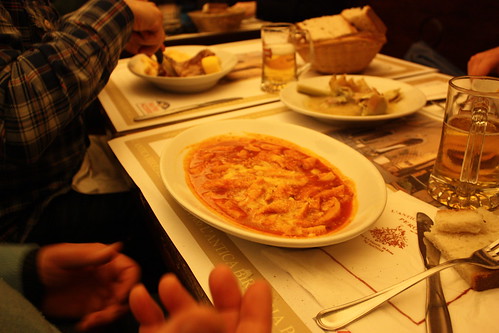 Trippa Romana. Notice the hands, so constantly in motion, that they're blurry. It's my belief this is how Italians burn off all the extra calories.

Tripe doesn’t scare me. I actually like it a lot, and I grew up eating it. My grandmother would make it in a runny, tomatoey broth, and I’d gobble it up without the addition of cheese. I remember my brother hating it, but I loved it. I ordered it once stateside, at Lidia Bastianich‘s restaurant Felidia in New York, and was disappointed. It was mushy and tasted – forgive me on this one – too clean. I ate barely half. The waiter looked at me sympathetically – I was the girl who was trying to be a foodie, who took a risk and couldn’t stomach it (sorry, again). I wanted to explain to him the whole story, but obviously didn’t.

Here, though, in the touristy-restaurant that isn’t touristy at all, my uncle’s tripe is perfect – salty and chewy and intensely flavored. I keep stealing pieces and dragging them onto my plate, a streak of orangey-red against the white of my noodles, and feel suspiciously like I did when I was a kid.

The tripe is salty, and it makes me thirsty. I notice that our bottle of water – ordered with our food – never arrived, and I decide to ask the waiter about it. My family warns me – service in Italy isn’t like it is the states. Water glasses never reaching empty, bottomless baskets of bread – these do not exist in Europe. And so, out of fear of committing a huge Roman faux pas, I gently grab the waiter’s attention.

“I am terribly sorry,” I tell him, flashing the brightest smile I can. “I know the gentleman is busy” (yes, I used third-person formal) “but when he has a moment, could we please have a bottle of water?”

Now, compare this the traditional Roman way of asking:

“Hey, asshole, where the fuck is my water?”

No, I’m not kidding. Cuss words pepper Roman dialect and no one bats an eye. But here I am, at the equivalent of the local diner, using third person formal to ask for water that we had already ordered. There were two ways in which this could go down: I was either going to make someone feel very badly, or I was going to get laughed at.

In actuality, both happen.

The waiter, after looking shell-shocked for a few long seconds, cracks. I have caught him so off-guard, this foreigner with her extreme politeness, that he is immediately apologizing. “I am so sorry,” he says. “My colleague brought your bottle to another table.” He immediately brings us glasses and a bottle, again blaming his coworker and apologizing.

I smile and thank him profusely. Someone feeling badly? Check. Someone laughing at me? 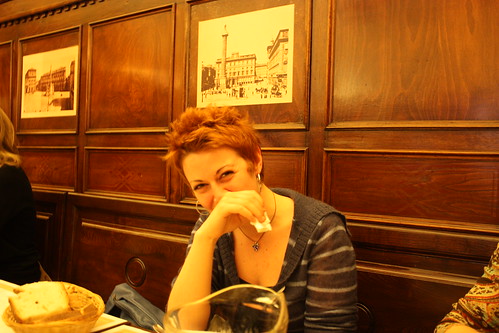 My little cousin (and my aunt and uncle for that matter) can not keep her shit together. She, my aunt, and my uncle, all collectively lose it when I ask for water, and again when the waiter responds so sweetly.

“That’s not how people talk in Rome!” she manages to spit out.

“Well, it’s how I talk to waitstaff,” I explain, smiling.

After lunch – one of those midday too-long extravaganzas the Italians are known for – we go for a walk, and I feel slightly out-of-place. A stranger in a familiar land. It’s an odd feeling. I take to my camera, snapping pictures of things here and there. When a tourist in Rome, act like one, right?

I see a boot on a car, and I take a picture, because I find it so ridiculous (seriously, if someone is parked where they shouldn’t be, tow their car – don’t immobilize it!) 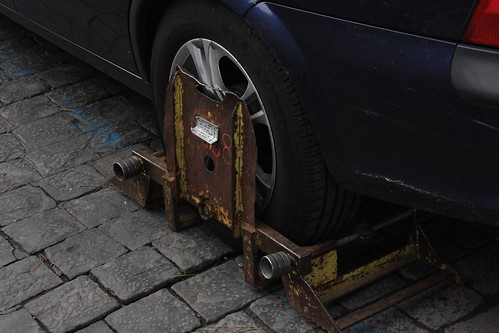 This is just bad practice, but I'm guessing it's the only way to get a Roman to pay a parking ticket.

As we walk away, I hear some gentleman talking about the boot.

“Well who the hell put it on here?”

“That woman just took a picture of it.”

Now, I don’t know why on earth they think this, but I turn around, abruptly. And without thinking, my hand is up, my index and middle finger pressed against my thumb in a pinched gesture, which I am waving back and forth.

And I am shouting.

And the gentleman are taken aback. No, no, of course not, they say. They are just curious as to who it was.

Okay, then. Well, it wasn’t me. And I turn and walk away. My response, this time, is quick and instinctual, and purely Roman.

And once again, my family is laughing.