There are times, when I travel, that I see behavior that makes me want to scream. Like yesterday morning, when a gaggle of young, mobile, healthy tourists refused to get out of an over-crowded elevator to make room for my husband’s grandparents (who eventually walked down five flights of stairs rather than wait for the next lift). I actually proceeding to run down to the ground floor to scrutinize the group in search of someone limping or hobbling, and planned on yelling at every single one of them after confirming they were healthy, but I didn’t make it in time (Perhaps it’s all for the best, because I suspect I would have lost my nerve.)

Or when I was in Italy a few weeks back, exactly at the same time that the tsunami happened. And while shopping at the Campo de Fiori in Rome, I saw this exchange between a vendor and a tourist:

Vendor: Where are you from?

Had my jaw not been dragging on the floor, I might have yelled at the man (even though I know how pointless it is to yell at a Roman. Yells to an Italian are like the sounds of a plane to someone who lives near an airport: they simply don’t hear it anymore).  The tourist in question, showing no small amount of restraint, thanked the man for the tomato and walked quickly away. 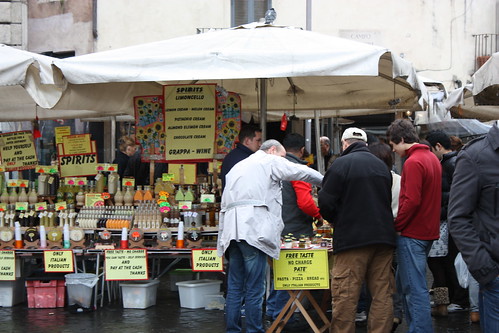 Here is the idiot in question. Because of that dear woman's grace, he is not on the ground, bleeding.

I would like to think that I could have handled it that well, but I know I wouldn’t have. Perhaps I would have screamed, no matter how futile it would have been. Though, far more likely, I’d have written a Dick Move! or three, raged to Rand about the events, and found myself acting excessively polite in hopes of making up for the shaved baboons that I often see pushing each other on massive transit. And, as I often do in the face of such douchebaggery, I may have found myself humming the song “Tenderness” by General Public (if you aren’t familiar with it, please watch the video immediately. Let no one say the 80s were not magical).

That song comes to mind when I think of that Japanese tourist. Because at that moment? She didn’t need some asshole making callous remarks. She needed a little tenderness.

And it is with both that woman and that song in my thoughts that I tell you about the benefit my friend Mimi has put together. It’s called The Sun Always Rises (clever there), and the proceeds will be going to Japan’s Red Cross. There will be some fantastic performances, music, drinks, and drumming groups. If you are in the Seattle area on SATURDAY, MAY 21st at 7pm, I strongly suggest you get yourself to the ACT downtown. Tickets are only $25, and I am positive there’s not a better use of your money (Nope. Not even cupcakes.)
So, if you are free and in Seattle next weekend, please consider going (or donating to Japan’s Red Cross directly if you are not). It’s sure to be a wonderful and inspiring night. And a great way to show a little tenderness.