On our last trip back from Europe, we were unfortunate enough to discover the one thing that could make an Air France flight worse. And it is having to share a cabin with this guy: 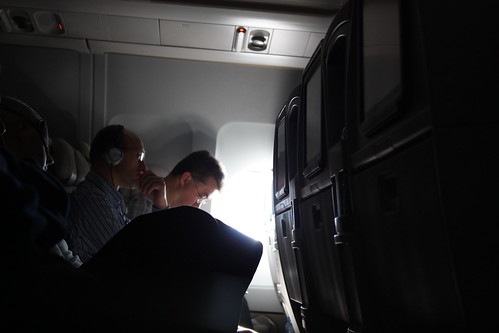 I’m referring to the one on the right, closest to the window. I realize that he doesn’t look that evil from this picture, but neither did that little kid from The Omen, and he was the son of Lucifer.

So I’m simply saying don’t dismiss a douchebag by his cover. Context is everything in this picture. As you can glean from his surroundings, the entire cabin was dark, and the overhead lights were turned off. The stilted, I-spit-in-your-general-direction in-flight service that Air France is known for had stopped. It was midnight in Paris, our port of departure, and people were exhausted and struggling to sleep. But it was incredibly difficult to do so. Why?

That asshole in the photo above would not close his damn window. And for that, I say, Dick Move.

The people in the cabin tossed and turned, squinting in his general direction, hoping he’d get a clue. He did not. He kept it open for the entire trans-Atlantic international flight. It was as though he had never been on a plane before (though I doubt that was true – he was clearly on a business trip) and couldn’t bare to miss one second of all the nothingness passing below us. At one point, I peeked out of our window to check if there was anything worth seeing. It was like staring at a lightbulb.

But wait – it got worse. He had his cell phone out, and was doing something with it (seriously, I only vaguely understand what you can do with a smartphone on a plane. After a few hours, Angry Birds loses its appeal). Whatever it was, it meant that the light from the window was hitting the screen on his camera, and reflecting blinding rays of light directly onto – you guessed it – me and Rand. It was like he was signaling planes with a mirror … right onto our faces.

Now, I know – he got a window seat, it’s his right to keep it open, blah, blah, blah. It’s also his right to fart freely and not wear deodorant, but I wouldn’t condone those behaviors, either, and particularly not on a plane.

People in the cabin turned to stare at us, exhausted and sympathetic. A few lifted their sleep masks and shook their heads sadly (you can, in fact, see at man at left in the phone, struggling to sleep). Tired of having our retinas seared, Rand and I stood up. The look of hope on the other passengers’ faces was apparent. Someone was going to do something!

A lovely French woman leaned over to me.

“Are you going to zay zometing?” she asked, in a excited whisper. “Because he is very rude. I cannot sleep! We are so very tired.”

We stood, flapping our arms to get the guy’s attention. He was obviously quite good at ignoring the feelings and sufferings of others, as quite literally the entire cabin noticed us before he did.

He looked up, utterly confused, and it was only as he sat there staring at us, and the reflection of the sunlight off of his phone hit us square in our faces and we fell to the ground, blinded, that he realized what the problem was. Making sure we saw exactly how much of a burden it was for him, he slowly lowered the shade of his window.

The entire cabin nearly erupted in applause. I heard sighs and whispers of relief.

Until, literally four seconds later, he proceeded to open his other window.

I shit you not. This asshole had access to TWO WINDOWS, and when we asked him to close one, he opened the other. The faces in the cabin, brightly lit by the harsh light of his window, were etched with pain and desperation. Somewhere, someone began to weep, softly. I heard prayers whispered in a variety of languages, all of them quietly imploring the mercy of a god who had clearly forsaken them.

Not ready to be defeated this close to success, Rand stood again, and flapped his arms, a majestic pigeon of hope. Our foe looked at him again, and closed his second window … only to reopen the first one.

Rand looked at me, incredulous. He sat down, defeated. It was hopeless.

And it was that point, dear readers, that I took out my camera and decided to document this asshole. Seriously, DICK MOVE INCONSIDERATE WINDOW SEAT GUY. You are heinous and rotten and selfish – and likely have a bright future ahead of you should you ever decide to work for AirFrance.