I might have overdone it on cupcakes when I was last in New York. I know: those words sound blasphemous, don’t they? Even as I try to type them, my fingers burn a little. If I attempt to utter the phrase, “I’ve had too many cupcakes” out loud, it sears my throat. Clearly, my body does not want me to admit to it, but admit to it I must: there is such a thing as too many cupcakes. Very simply, if you eat more cakes than you spend days in a city, you will get yourself into trouble.

And that is precisely what I did.

Of course, I regret nothing. After all, I had to fulfill my journalistic obligations, which were, to the best of my understanding, to eat every single cupcake I came across.

Yup. Every single one. If I saw a cupcake, I bought it. In New York City, where the homeless population has largely been replaced with bakery trucks (seriously? Movable cupcake repositories? I think I dreamt that idea up once in fifth grade. I never thought it would actually happen), such an endeavor is dangerous one. Even if you try to set up strict guidelines to avoid consuming enough sugar to take down an elephant (like, say, only eating cupcakes that directly cross your path), it’s still a risky game. After just a few blocks, you may find yourself in the throes of a diabetic coma, nonsensical babble pouring forth from your frosting smeared lips. 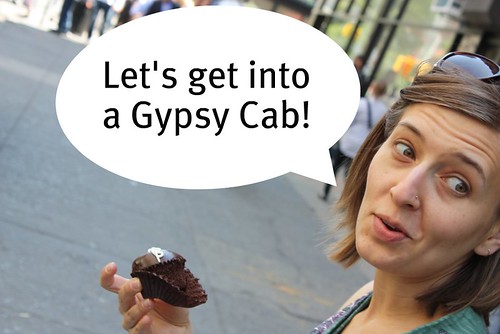 I was more animal than human.

But I pressed on, in the name of … I don’t know, science? Yes (that sounds far better than “gluttony”). Here are my findings:

I stumbled across this small cupcake stand while walking around SoHo with Rand.

“Do you want to try those?” he turned to ask me, but I was already navigating the line, trying to cut in front of a little girl and her grandmother (I am a monster). The premise behind Melissa’s shop is a fascinating one: she crafts teeny tiny stuffed cupcakes so that you can sample a half dozen or so without 1.) dying or 2.) inflating your fundament to a size that cannot be contained in your skinny jeans. They’re inexpensive, and you can experience slightly less shame than you normally would when confessing that you devoured six cakes by yourself.

Friend: “You ate HOW MANY of them? They mini-cupcakes, right?”

We got two red velvets, and one each tie-dye, mint-chocolate chip, chocolate peanut butter, and chocolate-chip pancake (of which I was wary, but the girl behind the counter declared it her favorite). 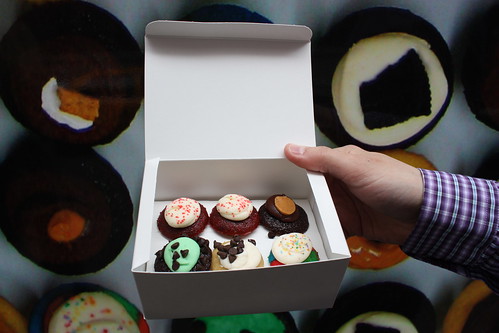 Rand's hand might have been bitten in the tasting process.

The cupcakes were moist (even, perhaps, a bit oily) but according a lot of Yelp reviewers, the small size means that a lot of batches risk being too dry (there’s a joke here … give me a minute). I enjoyed the red velvet and tie-dye, even though the the latter was merely a vanilla cake that had been soaked in a spectrum of artificial colors. The rest weren’t bad, but they almost ventured a bit too far into candy territory with their flavors and fillings. As a child of the 80s and 90s, who grew up eating Gushers instead of fruit, this wasn’t entirely a problem for me. More sophisticated palettes would no doubt be horrified. 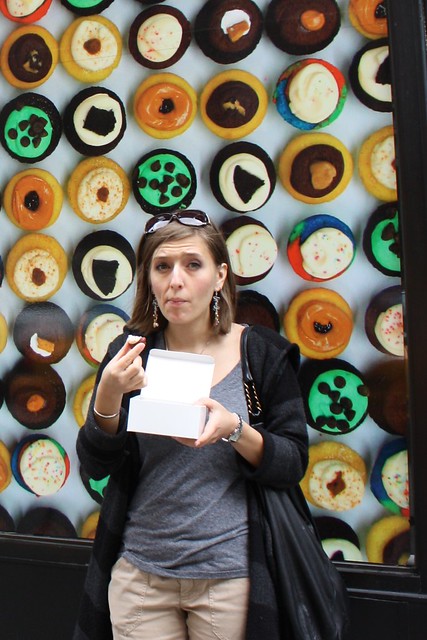 What? Don't judge me.

Verdict: They’re kind of like that guy you slept with junior year of college. They fulfilled a specific need at the time, but unless you are feeling truly desperate or drunk, you are unlikely to ever go back.

I’m slightly wary of eating food from trucks. It just seems like a bad idea to trust a chef who has his own getaway vehicle. I’m convinced I’ll open a pastry box and it will be filled with an apple and a note that reads, “Sucker!” and before I can complain, they’ll have disappeared down 5th avenue in a puff of exhaust. And I am so not chasing after them. 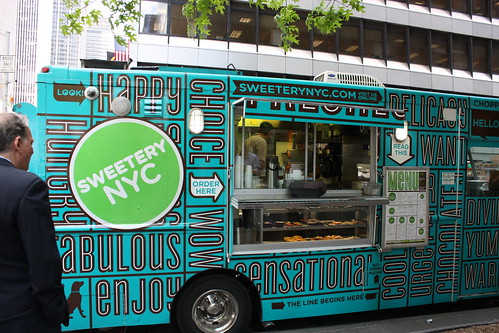 While the Sweetery didn’t insult me by giving me fruit or something else equally reprehensible, I was utterly disappointed in their cupcakes. I tried both the chocolate and the red velvet. The cakes of both were middling – not bad, and fairly moist. The chocolate was covered with runny, flavorless frosting that was like lukewarm butter. The cream cheese frosting tasted way too tart (like they had just dolloped a bit of Philadelphia spread straight from the tub and called it good). 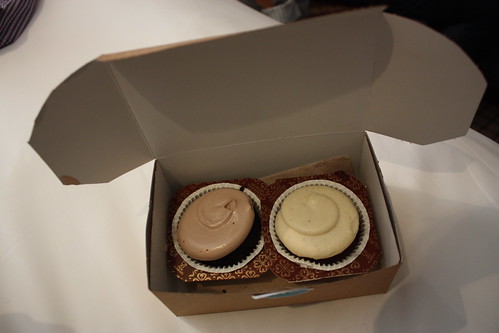 But the real indication of my disappointment? I finished neither. I took a bite of each, and deposited what remained neatly a top a trash can, should someone else less fortunate in life and less picky in cupcakes wish to try them.

Verdict: If they improved their frosting, they might stand a chance. As is? No way.

After the utter disappointment of Sweetery NYC, you’d think that perhaps I’d have learned my lesson about food trucks, or at the very least, that I’d begun to question the idea of eatin my way through the hand-held gateaus of New York.

And I can resolutely answer: Not at all. I was still as dedicated to the cause as I had ever been.

It might have even been that my husband was telling me about some exciting developments in his own career when we had this exchange:

Rand: “You’re just staring at that cupcake truck. You don’t even care that I’m here.”

Me: “Babe, that’s not true. I care about your success a lot.”

Rand: “Because it enables you to buy more cupcakes.” 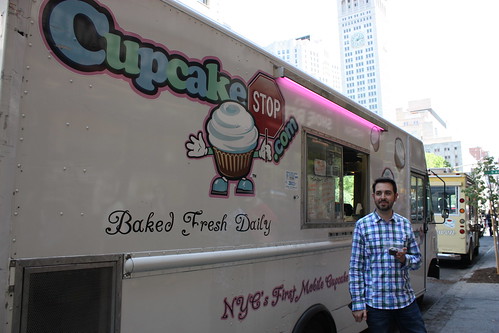 I still do love you, guy who brings me cupcakes and sleeps in my bed.

Granted, Cupcake Stop was the most specious-looking shop that I had yet encountered: the 70s-era truck with an anthropomorphic cupcake on the side of it was in no way instilling me with confidence. But, as science was at stake, I pressed on, and found a cupcake almost as kitchy in appearance as the truck it rode in on. 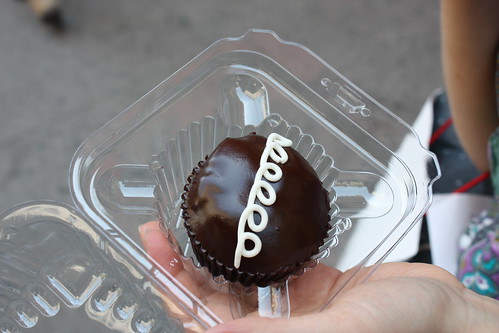 Ignore the Anthropologie bag in the background. I am a creature of many vices.

Having so adored pre-packaged Hostess cupcakes in my youth, there was no way I could resist this homemade riff on the original. It even had the cream filling. 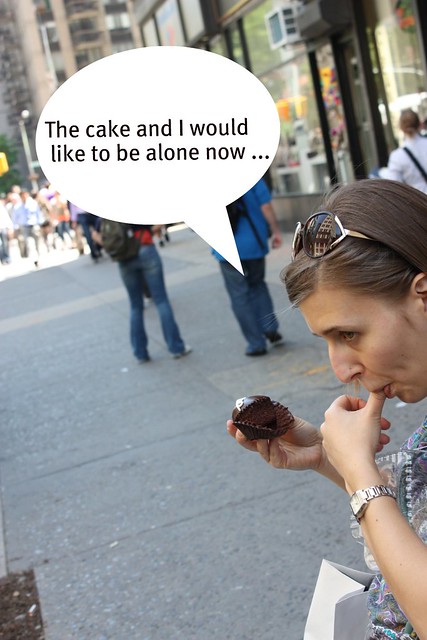 Verdict: Fantastic. I didn’t try their other flavors (and the reviews I read were middling at best), but this one was clearly proof that you can’t judge a cake by its truck.

A while back, when I went to Billy’s for the first time, I found it was barely a whisper on the lips of most New Yorkers. They seemed afraid to utter its named aloud, fearful that their secret neighborhood bakeshop would be overrun with tourists. The quality would suffer, and Billy’s would go the way of Magnolia Bakery and so many others before it. I tried their cupcakes and was fairly pleased – though I found the frosting lacked a bit of height (seriously, folks, if Ashley Rodriguez has taught me nothing else, it’s this: dessert is nothing without salt. Also, marry a dark-haired man and you will be happy.) The cake, though, was moist and perfect.

This time around, when some friends insisted we visit Billy’s after dinner (and maybe, just maybe, they insisted because I had been whining about cupcakes throughout dinner), I found that the frosting had improved. But the cake had gotten worse. 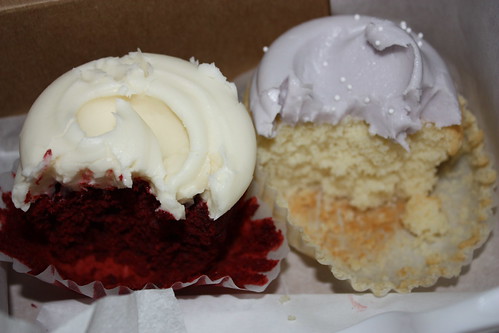 Pretty, yes? But not all lovely things have substance.

They were so dry, they crumbled into dust upon each bite. It was tragic, really. Not to say that I didn’t eat most of them that night, in desperate bites consumed in the privacy of our hotel room (What? A good cupcake gone stale is better than a fresh mediocre one. It’s SCIENCE). And it was only as I  scraped the smudged frosting from the lid of the box that I thought, maybe, maybe, I had had enough of New York Cupcakes. Four shops in two days was plenty, wasn’t it? Besides, Boston was on the horizon, and its eponymous cream pie wasn’t going to eat itself.

Verdict: Does it matter what I think of Billy’s? I’m clearly mad. Just scrape off the frosting, smear it on your naked torso, and dance through Chelsea. If you give me enough notice, I may even join you.