(Yesterday I told the tale of how I visited the Statue of Liberty. This post continues where that one left off, as I made my way from Liberty Island to Ellis.) 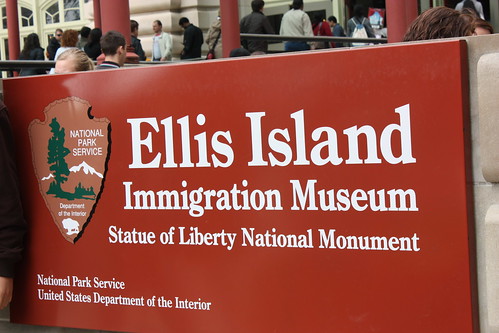 I call this "Sign at Ellis Island with Arm of Some Dude Who Wouldn't Get Out of the Way."

I’d be remiss if I told you about my visit to Ellis and Liberty Islands and neglected to note how I almost royally messed up the entire trip.

The ferry that I boarded in Battery Park was scheduled to make two stops – first to Liberty Island (where the eponymous Statue of resided) and another to Ellis Island. I assumed there was service between the islands, and I considered staying on the ferry and going straight to Ellis first, hitting up Liberty on the way back. Fortunately, I had the presence of mind to ask a crew member about this idea, and he informed me that this was impossible. The ferries go from Ellis Island straight back to the mainland, so if you don’t get off on Liberty Island the first time around, you will miss it. And yet, I nearly did this (as did, based on the conversations I overhead, a few other people on the boat). Clearly, I am not cut out for travel blogging, as I have a tendency to completely miss the places I’m trying to write about.

I think my instincts were right, though, at least from a narrative perspective. Because Ellis Island is a grim place. It is the harsh reality behind the dream the Statue of Liberty embodies. The statue is uplifting and inspirational, and it makes sense that one would want to end their tour on a high note by seeing her last. But you can’t. You must see Ellis Island second, and it will shatter you, and that’s all there is to it. 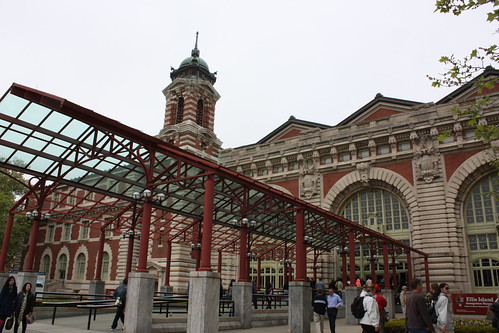 The immigration station at Ellis Island

Do you hear me? IT WILL MESS YOU UP. Far more than Leo sinking to the bottom of the ocean ever could.

Again, once you actually make it to the island, it’s incredibly easy to navigate. I followed the crowds and again picked up my audio tour. Seriously. I cannot recommend them enough. I’d have been lost without mine. Much as Ghostbusters II taught me most of what I knew about the Statue of Liberty, another sequel, The Godfather: Part II was the basis for most of my knowledge of Ellis Island. I thought of tiny Vito Corleone, quarantined for smallpox in a room by himself (his entire family had been murdered back in Italy), singing a song in Italian, as he stared at the Statue of Liberty out his window. And indeed, death and disease are themes that come up repeatedly at Ellis Island.

In the 1890s, immigration to the U.S. was handled individually by each state. The influx of immigrants soon made this practice untenable, so the Federal government stepped in (this was one of the first instances where the feds actually reduced corruption and disorganization in the status quo. HA! SEE WHAT I  DID THERE? I insulted our government for no reason). From 1892 until it closed its doors some 62 years later, 12 million immigrants were processed through Ellis Island. They left their mark, quite literally. While the walls have since been restored and repainted, a few of the old sections were preserved, scarred with decades of graffiti and markings from thousands of soon-to-be Americans. 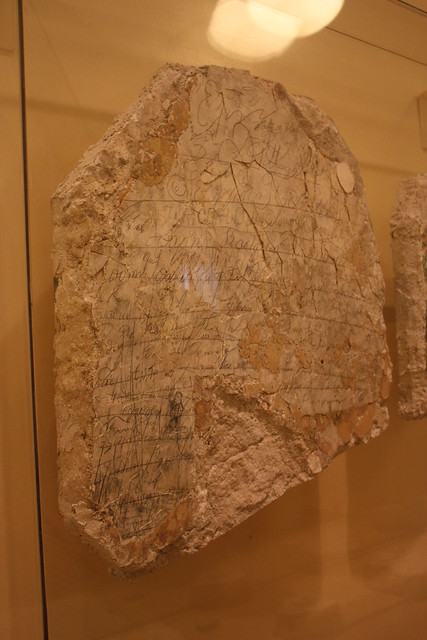 Section of plaster taken from The Great Hall in Ellis Island. 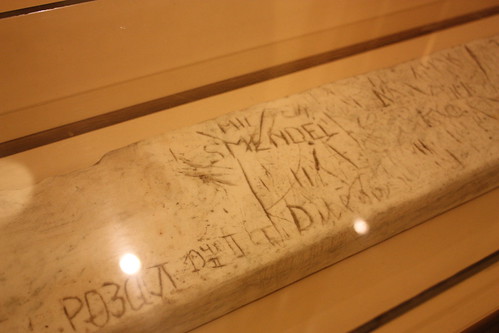 Of the 12 million who passed through the doors to Ellis Island, around 2% were sent back to their home countries – a small percentage to be sure, until one considers that it amounted to 240,000 people. A quarter of a million folks forced to return to their port of origin after they made the long journey to America. They were rejected on a variety of grounds: chronic illness, criminal backgrounds (or outstanding warrants), insanity, or because they lacked the skills needed to support themselves in the new world. As a result, Ellis earned itself the nickname “Heartbreak Island.”

If your papers were in order, and you were deemed healthy and of sound mind, you’d be processed through Ellis Island in a matter of hours, but this seemed to be the exception and not the rule. Thousands were detained for illness, and more than 3,000 immigrants died in the medical buildings on the island.  As I climbed the steps to the Great Hall on the second floor (where processing would take place), I learned that this was the first part of the medical evaluation. Immigrants were surreptitiously being watched by doctors to see if the flight of stairs gave them difficulty. 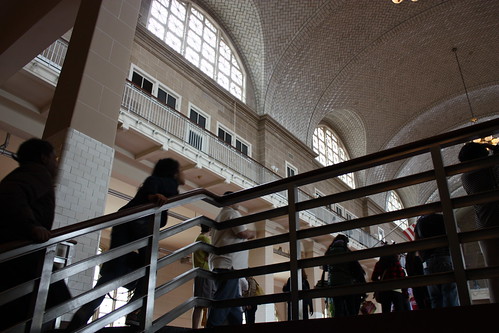 Now, if you have trouble with the stairs, there's an elevator. 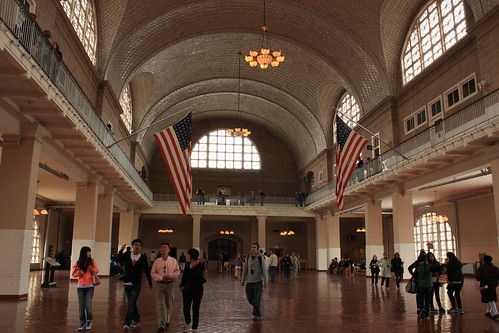 Once inside the Great Hall, immigrants would proceed through the line exam. They’d receive a medical evaluation that lasted roughly 6 seconds, and if they were suspected of having an illness or disease, a corresponding letter would be marked on their clothes in chalk. This would notify doctors that they would need to administer a second, more in-depth exam (supposedly some folks cheated this system by brushing off the chalk or turning their clothes inside out, but the only evidence I can find of that is a link from Wikipedia to an un-attributed geocities site. I am nevertheless convinced, as both a point of personal pride and evidence of my own racism against my bretheren, that if it happened, it was the Italians that did it). 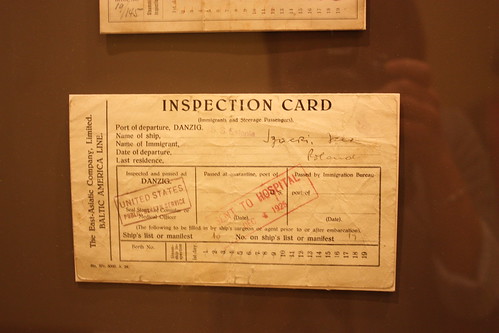 Some were sent immediately to the hospital. 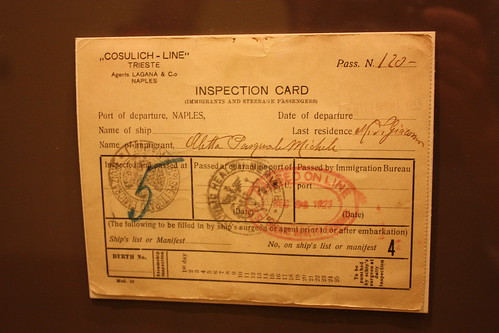 Others passed through the line and were cleared for entry in the U.S.

There were also cognitive exams that, while simple in nature, must have been utterly nerve-wracking to endure. The stakes for a wrong response were just too high. Imagine a game of Jeopardy! where, if you answer incorrectly, you’re deported (on the plus side, we could still call it Jeopardy!). 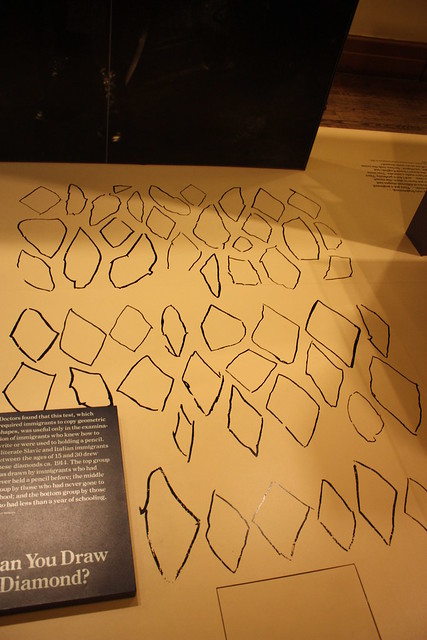 Those being tested were asked to draw a shape shown to them (in this case, a diamond). Problem was, many of them had never held a pencil before. 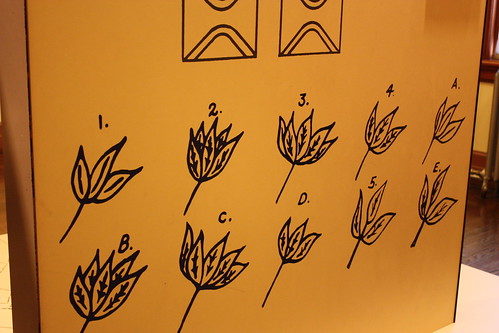 I was actually impressed at how they were able to create non-language specific tests - for example, selecting matching pairs of flowers.

My audio tour included snippets of interviews with folks that came through Ellis Island, recorded back in 1986 for the Statue of Liberty’s 100th anniversary. One woman talked of how she was so nervous when she went through the line as a little girl, she was labeled as having “a mental defect”. But after a few tests, the doctor marveled, “Why, there’s nothing wrong with her at all! She’s clever!” Another spoke of how her grandmother was sent back to Sweden, alone, having been denied admittance because of a growth on her fingernail. That was it. A growth. All of her family was now in the states, and she was sent back alone. They never saw her again. Eighty years later, her granddaughter, now an old woman herself, wept when she recounted the story.

Tragedies took place in Ellis Island. While the Statue of Liberty conveyed a promise, the immigration station didn’t always make good on it. A photo on one wall showed the faces of a group of “rejecteds”. And though it was a photograph, and one that was nearly a hundred years old, I could barely look them in the eye. I didn’t take a picture of it, because I didn’t want it to haunt me more than it already does.

So, instead of their miserable faces, enjoy this photo of young immigrant who I thought looked a lot like Adam Scott. On whom I might have a weensy bit of a crush (and who is on the short list of folks I’d pick to play Rand in the incredibly boring movie loosely based on my life). 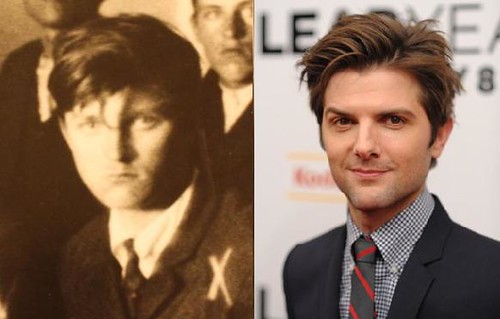 On the downside, it looks like the young man at left was marked with an “x”, which generally you were suspected of having a mental defect. But let’s just pretend he made it in, on the criteria of, I don’t know, “Yumminess.” Yes. Let’s go with that. Because if you don’t tell yourself little lies, like, “Oh, I’m sure they were fine,” you will not be able to stand Ellis Island.

Because that’s the thing: real life is excruciating enough. Grandmothers sent back to their home countries alone; sick children dying in hospital wards, later to be interred in a country in which they would never live; families torn apart when they were just trying to make things better for themselves. It’s all ridiculously, horribly sad. And it’s part of why, all those years ago, I laughed at a frozen Leonardo DiCaprio sinking into the ocean. Because you know what? Leo is fine. He is positively fine. He has a fantastic career that’s spanned decades, and he’s in his thirties. The idea of weeping for him is ridiculous. Even when I was 17, I understood this. 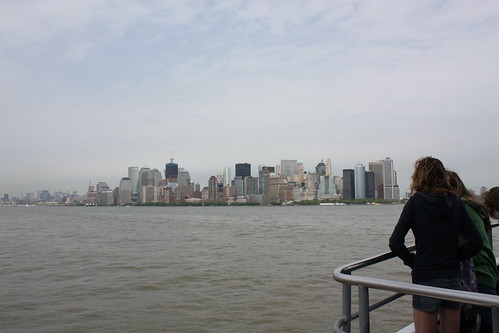 It’s why I never shed a single tear while watching Titanic. But while visiting Ellis Island? Well, that’s another matter entirely.

The Essentials on Ellis Island and The Statue of Liberty (ferry ride and tour):