(Note: Some of the events in this post have been dramatized slightly in order to highlight how little I know of Boston, and to further ridicule Rob. Enjoy.)

There is a time in every travel blogger’s life when she is tested. She will find herself with a group of friends in a town that is not her own, and someone will turn to her and say, “You know this city, right? So, what’s there to do around here?”

From that point, she has several options.

Ever the multi-tasker, I went with a combination of options 3 and 4.

But I’m getting ahead of myself.

My moment of truth came in Boston, in early May. Rand was speaking at a conference put on by some of his British colleagues (yes, there is something very comedic about being in Boston with a bunch of Brits, but more on that later). While Rand was off doing whatever it is he does (He’s like the husband on all those 50s television shows. In honor of Hugh Beaumont or Ozzie Nelson, let’s simply call him a businessman, shall we?) I found myself with a group of folks who Rand knows professionally, but whom we both know (and kind of love) personally: the kids from Distilled Seattle. Oh, and their English manager, Rob, who I’ve abused on the blog before.

I ate breakfast with the Distillers (yes, that it what they call themselves. I like it, too) in Boston’s North End. While this is generally the Italian part of town, we found a place that also served Brazilian food. Don’t make me explain the logic behind this restaurant concept, because I can’t. Fortunately, few places can actually screw up breakfast, so our meal wasn’t half bad. Afterwards, we stood outside on an empty street in the mid-morning fog. And that’s when it happened.

One of them turned to me and said, “You’ve been here before, right? So what’s there to do in this town?”

Showtime. I breathed deeply, rubbed my hands together, and began to speak.

I told them about Mike’s Pastry down the street. It was good, but usually crowded. At this time of day, though, we’d probably be fine. The torrone was a bit too sweet, but not bad. Really, Modern Pastry was better, but they didn’t accept cash. Still, they made an exceptional cannoli – they don’t fill them until you order one, so they don’t get soggy. Oh, and there was a fantastic bakery on the corner. I couldn’t remember the name, but they made these great little waffle cookies.

Of course, we were severely limited by the neighborhood, I explained. Really, everything nearby would be Italian. If they wanted cupcakes I knew a great place but it wasn’t nearby, so …

At this point, I realized that a few folks were staring at me blankly.

“Um, so,” someone said gently, “We’ve all just eaten, so we don’t really need to go to a bakery.”

It’s a strange thing: someone can say a phrase in an language in which you are fluent, but it still makes absolutely no sense. Like “We don’t really need to go to a bakery” or “I didn’t save room for dessert” or “I don’t like sweets.” I mean, seriously, WHAT ARE THEY TALKING ABOUT? It’s like gibberish.

I studied their faces, trying to discern if they were making some sort of joke. But, no. They were serious. They didn’t want to down a bunch of baked goods after a breakfast of pancakes. They wanted to see historical sites.

I wanted to run screaming, because clearly, the Distillers are nuts. Figuring that I’ve embarrassed Rand in enough work situations, I resisted the urge.

Besides, I could do this. I’d been to Boston plenty of times. Of course, I’d mostly been hunting for sweets, but surely, surely I had learned about the nation’s history in the process, right? Or was there nothing more to my life than liberty and the pursuit of frosting? (Sorry.)

I decided to show the Distillers Quincy Market, The Old South Meeting House, and whatever cake shops lay in between (I mean, just because they’re insane doesn’t mean I am).

On the way to Quincy Market, we walked by the Holocaust Memorial. Someone astutely pointed out that the mist which emanates from the floor of the memorial looked like gas. Apparently this is precisely the point. Despite being a usually cheery crowd, the Distillers were somber, and I wondered if contemplating the deaths of 6 million Jews at 10 am was perhaps not the best way to start one’s day. 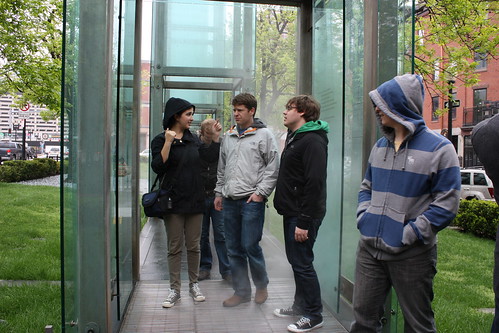 We left the memorial and headed towards Quincy Market, passing Faneuil Hall along the way. It was unfortunately closed for renovations. On the plus side, this meant the plaques on the building, full of those pesky facts that are always bringing me down, were invisible to us. 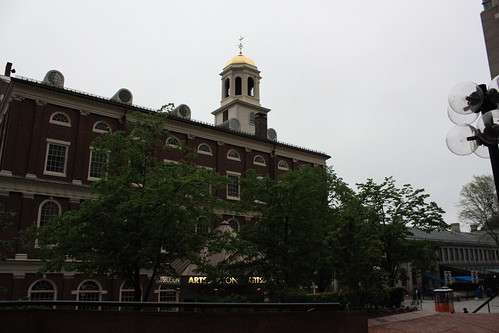 Faneuil Hall, which was blissfully closed for renovations, so I could say whatever I pleased about it.

I pointed to Faneuil Hall and began to shout (which is a great way to sound like you know what you are talking about when you actually don’t).

“THIS BUILDING,” I screamed, “IS WHERE THOMAS JEFFERSON WROTE THE SONG GOD BLESS AMERICA.”

Someone may have disagreed with me. Perhaps they noted that Thomas Jefferson didn’t write “God Bless America.” That he was a secular humanist, and the song was written long after he died. Or that Faneuil Hall was actually an old market and meeting place, and the site of some rousing speeches about independence by folks who were decidedly not Thomas Jefferson. It doesn’t matter, though, because they could not be heard over my shouting, and so I was right.

Next up was Quincy Market. 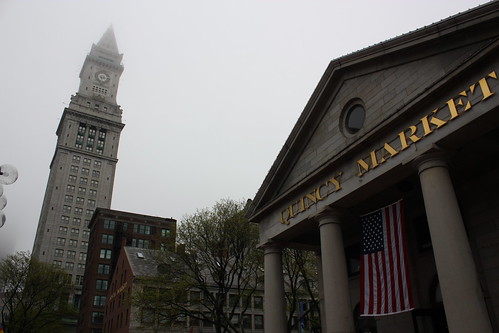 “QUINCY MARKET WAS BUILT SOMETIME IN THE EARLY 1980s IN HONOR OF THE EPONYMOUS CHARACTER PORTRAYED BY JACK KLUGMAN,” I shouted (though Wikipedia claims otherwise. But we know how reliable that site can be, so Klugman Market it is). At this point, I sensed that I was losing the Distillers’ attention, so we meandered inside. I wanted to point out that the black and whites at one of the food stands weren’t particularly great, and that the chocolate chip cookies were the way to go, when I began to wonder if I spend too much time thinking about desserts. 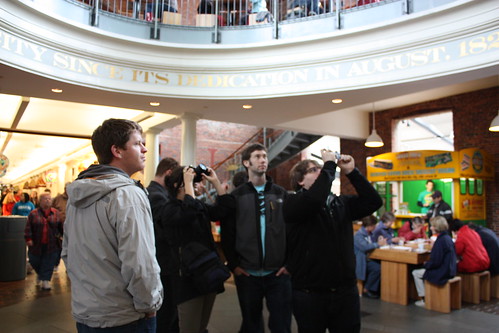 The Distillers taking photos of random things on the ceiling. They make me SO proud.

From Quincy we walked towards the Old State House, and I suddenly realized that this was part of the tour that I didn’t even need to scream about: I actually knew what was going on.

“We’re going to see where the Boston Massacre happened,” I explained. I gestured to Rob. “It’s where the British shot into a crowd of unarmed patriots who were helping a little old lady across the street.” (Okay, fine. I sort of knew what was going on. Turns out about 50 Patriots actually attacked a British Sentinel, and the redcoats called in reinforcements. But I like my version better.)

Rob seemed slightly put off that I was personally blaming him for things that transpired between Britain and its colonies more than 200 years ago. So naturally, I kept doing it.

“They murdered five innocent people, including Crispus Attucks,” I leaned in for emphasis, “a black man.” I realize that this was an odd thing on which to focus, but I remember distinctly that my school book had done so in the third grade, so I decided to go with it.

“Do you mean to tell me,” Rob replied (with a nice dollop of English sarcasm), “that United States has never mistreated a black person?”

“THIS IS NOT ABOUT US, ROB. IT’S ABOUT WHAT YOU DID TO POOR CRISPUS.” He must have had trouble arguing with my stellar logic, because he said nothing.

Political disagreements aside, Rob was good enough to pose for this photo in front of the State House. That’s him on the left, pouting, while his America colleagues smiled victoriously. 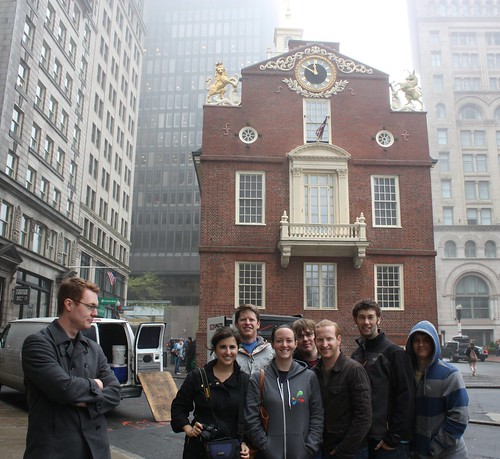 If you think about it, we're ALL winners of the American Revolution. I mean, except for the British.

I was even able to point out the black circle of pavement outside the State House which is precisely where the Boston Massacre happened: 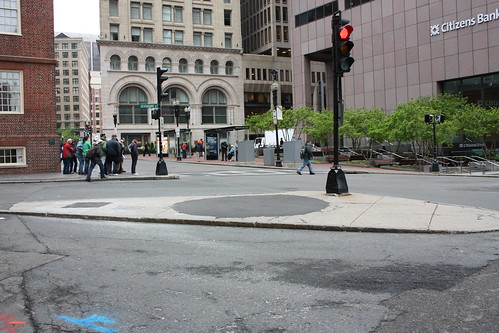 Arguably, it is not that interesting.

Nearby was the Old South Meeting House, and I recommended that the Distillers pay the $6 admission price to go inside, as it’s worth a visit (I reviewed it more extensively here). It’s brimming with history. Inside, you can see one of the first books published by a black woman in the United States – a collection of poems by a teenage slave named Phillis Wheatley  (“And what have you done with your life?” the voice inside my head cried in reply.) It’s also where Benjamin Franklin was baptized, and the site of numerous pre-revolutionary meetings (it’s said that the Boston Tea Party was planned there).

“It was a truly important building,” I explained to the Distillers, “so during the revolution, the British made sure to take it over and use it as a stable. They burned all the pews for firewood. I’m sure Benjamin Franklin shed a silent tear.”

Rob said nothing in reply, so I may have leaned into his face and starting shouting, “U.S.A.! U.S.A.! U.S.A.!” Being an American is awesome.

And at the door of the Old South, I said good-bye to the Distillers. They’re lovely people and all, but I hadn’t had a cupcake in twelve hours, so I had a good case of the shakes. I needed a dose of frosting to tame my demons.

As I walked away, I was slightly concerned about whether or not they’d enjoyed the bits of Boston I’d showed them. Later, I asked one of them if they’d had fun, and they assured me they had. I sincerely hope so. Though I suppose if things got boring, they could always have started harassing poor Rob. That’s a great way to spend an afternoon, I’ve found.

And to his credit, he really is a good sport about it.