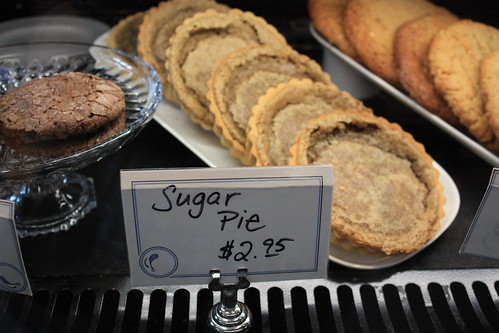 –
There are times during my travels when I discover something so magical, I think, “I must share this with the world.”

And by “share it with the world” I mean prattle on and on about it on my blog, of course. I’d like to think that I’ve shared my views on profound worldly matters, like cultural relativism and historical revisionism, and other “isms” which I occasionally toss into conversation to make myself sound smarter. But those of you who read my blog know that’s not the case.

You know that, more often than not, I write about desserts.

Really, I’m not sure what’s wrong with me. This tendency to obsess about sweets is all-consuming. I think about them constantly. Meals are something to be gobbled up as quickly as possible (and with as few calories as possible ingested) in order to make way for dessert. I bookmark baking websites constantly, and sometimes when I’m bored, I just look at pictures of cakes. It’s totally warped. I blame my father (I inherited both his debilitating sweet tooth and his slow metabolism).

A friend of mine once made a French dessert from a random recipe she found, and when she pulled it out of the oven, I shouted, “OH! You made a clafoutis!” She stared blankly at me, because that is exactly what it was, but really, WHO IN THEIR RIGHT MIND HAS EVER HEARD OF CLAFOUTIS?

So you can imagine my reaction when we entered a small cafe in Vancouver and I saw a dessert that was entirely foreign to me. I was playing hooky from my travel conference, and Rand and I were roaming around a cute little neighborhood, starving, on a sunny afternoon. We popped into a cafe called “The Salty Tongue”, which, name aside, looked promising. They had large sandwiches made on big, crusty loaves, savory pot pies, salads with locally-foraged vegetables, and all sorts of other yummy non-desserts that a normal, starving human being would drool over.

But I am not normal.

While Rand was trying to decide what to order, my eyes were fixated on the dessert case. 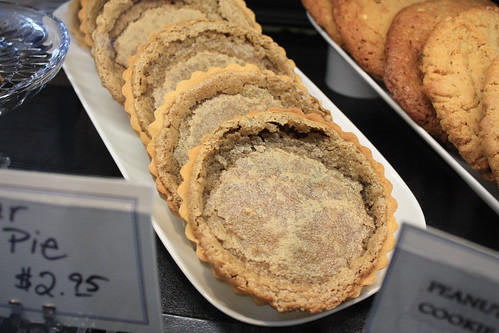 “What,” I said, tapping the glass with my finger, “is a sugar pie?”

The girl behind the counter explained that it wasn’t unlike a treacle tart or a maple pie.

I stared at her blankly. “Treacle tart? Maple pie?” These were fantastic word combinations that I had never heard before. That’s the funny thing about being an American in Canada. Every thinks that you’re one of them, and things seem to be going on swimmingly, until someone says something that doesn’t translate, and you realize how radically different two conjoined countries can be.

“Ohhh,” the girl replied. This had explained everything.

“Yes!” she exclaimed. “Precisely. But without raisins.”

I told her I would take one. Never mind that I had yet to order any actual food.

Rand stood near me, dizzy from low-blood sugar, trying to understand what was going on.

“What the hell is a butter tart?” he asked me.

“It’s like a pecan pie without the pecans,” I said. “Sometimes they have raisins.” I didn’t admit to him how I knew this: that one evening long ago, I had whiled away several precious hours reading about butter tarts on Wikipedia.

That’s right: Wikipedia. I research desserts. I know. It’s an illness. Send me cold glasses of milk and your best wishes.

Rand and I sat down, and as we waited for our meal to arrive (yes, I ordered “real” food), I stared lovingly at my sugar pie. The surface was cratered with tiny little bubbles, surrounded by a perfectly fluted crust. 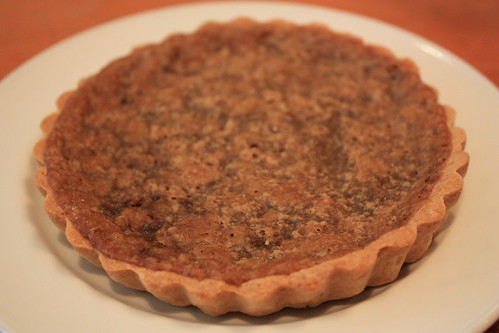 “No you shouldn’t,” he replied, reminding me of why I married him (even though it necessarily means I have to share my dessert). I took a bite. And then another.

The crust was buttery and crumbly, like a shortbread, and the filling was caramel-like and gooey. It was surprisingly not-too-sweet, like a mild Twix bar, denuded of chocolate.

Rand and I gobbled down the whole thing. And you’ll forgive me if I refuse to admit whether we did so before or after the rest of our food arrived.

But I’m pretty sure you can guess.