I’ve often said that the greatest trick San Francisco ever pulled was convincing the world it was part of California.

The city by the bay isn’t terribly sunny or warm. A chilly wind barrels down its streets, and as you clutch your coat tightly to you IN THE MIDDLE OF AUGUST, you contemplate moving someplace warmer. Like Portland. The beaches near San Francisco aren’t much better: cold, rocky, and inhospitable.

In both cases, I blame the Pacific ocean. It is deep and dark and vast, and unforgivably cold. I’ve never swam in it – I refuse to do so until I have a full body wet-suit that makes me look skinny and has a special apparatus to keep my cupcake dry (that is not a euphemism).

So when Rand suggested we visited Muir Beach – roughly 20 miles and 40 minutes away from San Francisco, I was hesitant. I grew up near a real beach – on the Atlantic Ocean – where the water was warm and the sand would scorch your feet. Where you could run around in a bathing suit in the middle of December (wearing a bikini in the holiday season is not something I have attempted since childhood. Now, I suspect large parts of me would jiggle like a bowl full of jelly). But I was curious to see what the Pacific had to offer in way of beaches, and despite the weather, the Bay Area is beautiful. So on a grey morning, Rand and I headed out. 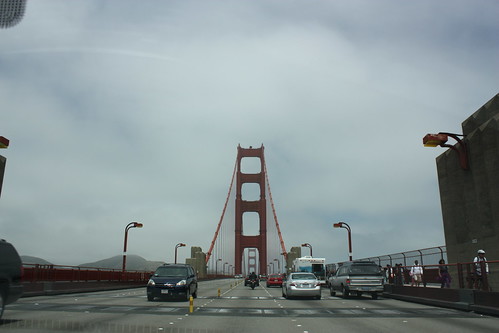 It was hazy, but not terribly bad. We could still see the top of the pillars of the Golden Gate.

As is usually the case, we found sunshine as soon as we were outside of San Francisco. 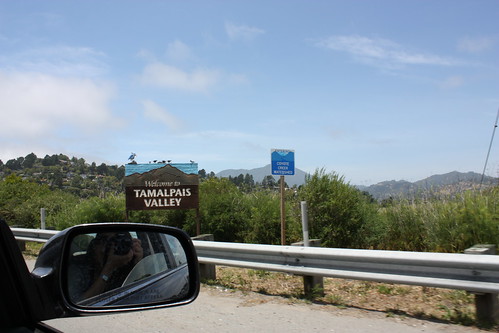 Its name means "Land of Tamale."

We encountered the marine layer again as we neared the water. To complicate matters, construction crews were doing repairs on the narrow winding road to Muir beach, and we found ourselves caught in terrible traffic.  Driving to the beach was not proving to be the walk in the park we thought it would be. 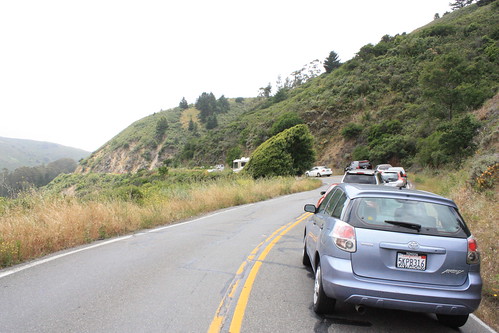 This was our view for the better part of half an hour.

At one point, a construction worker stopped our one-lane road altogether to let traffic by in the other direction. I was able to pop out of the car for a few moments. 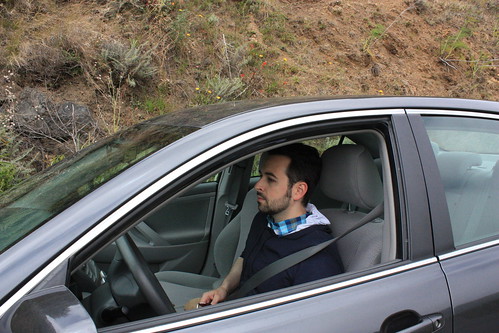 Aw, come on, babe. SMILE. Pretend you aren't spending one of your few days off stuck in traffic.

Rand also proceeded to take a series of terribly unflattering photos of me (this is not his fault. I am notoriously unphotogenic). This was one of the better ones, in part because you can barely see my face: 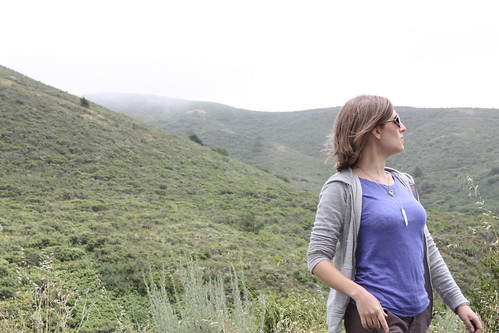 On the plus side, my boobs look great. I must wear that bra always.

I then returned to the car and we proceeded to drive 50 feet before we waited some more. 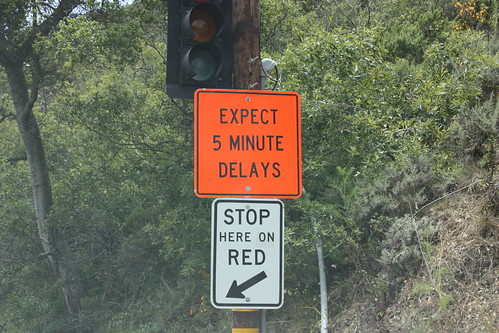 They warned us of 5 minute delays. What they did not say was that there would be half a dozen of them.

I probably should have been annoyed by now, but I wasn’t. Not really. You’re going to think I’m a sentimental sap for this next comment, but here goes: being stuck in the car with Rand is not all that bad. He looks great in profile, for one. And he’s an excellent driver. And he let’s me finish whatever snacks I’ve packed.

And he sings along to Journey. 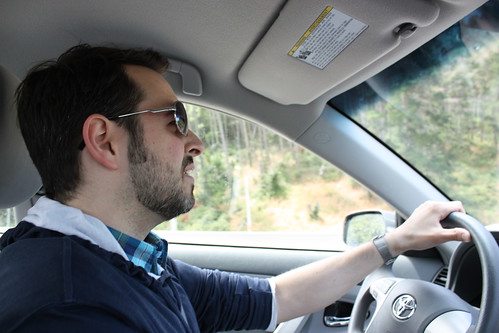 I’m not saying that I wasn’t relieved when we finally made it to Muir beach. I’m just saying, there are worst things in the world that being caught in traffic with that man. 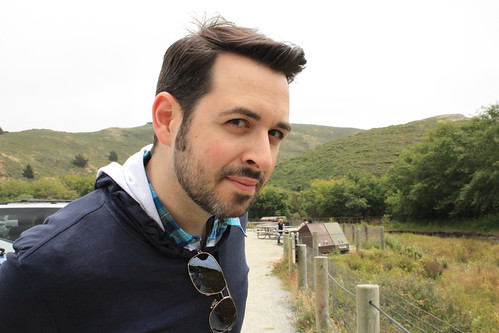 You heard me, brown eyes.

The beach was what I had expected – chilly and overcast. It didn’t stop it from being crowded. I suppose west coasters aren’t terribly particular about beaches. After all, they’re all on the Pacific. 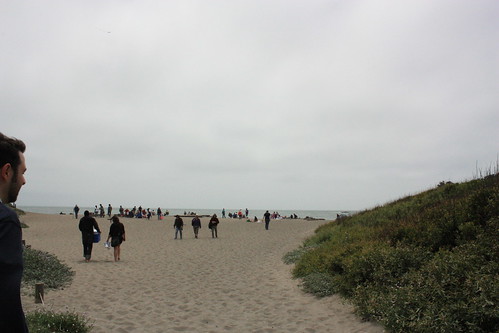 We're going to the beach. Bring a sweater.

This was not like the beaches of my childhood.

The sand did not scorch our feet. It was so fine that it became sticky when wet, and felt like clay on our toes. 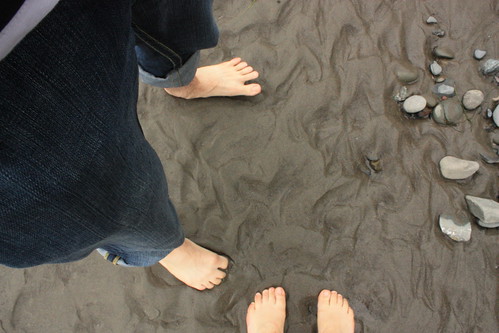 There were no palm trees or ugly, enormous hotels. No flat expanses of land meeting the sky. Instead we found evergreens and rocks, and the occasional house, no doubt owned by some old silicon valley billionaire. 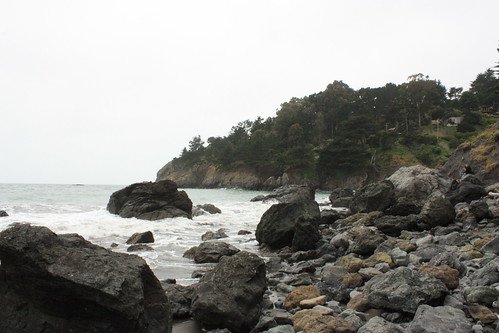 Beads of sweat did not accumulate on our brows the moment we stepped into the sun. We were not wearing bathing suits. We would not even take off our sweaters. 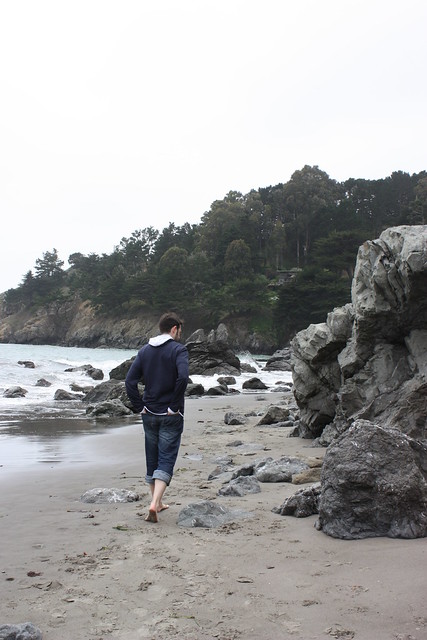 No. This beach was not like the ones on the Atlantic, at which I spent countless hours. Neither the sky nor the ocean was blue. And despite that, despite the chilly wind and the lack of sunshine and the frigid water? 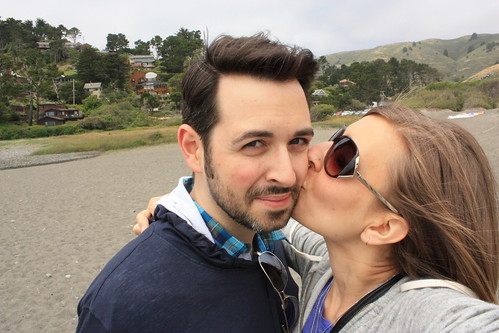 I didn’t feel the cold at all.

Heck, I might even go back to Muir beach. I don’t think I’ll bring a bathing suit, though. Just a sweater. 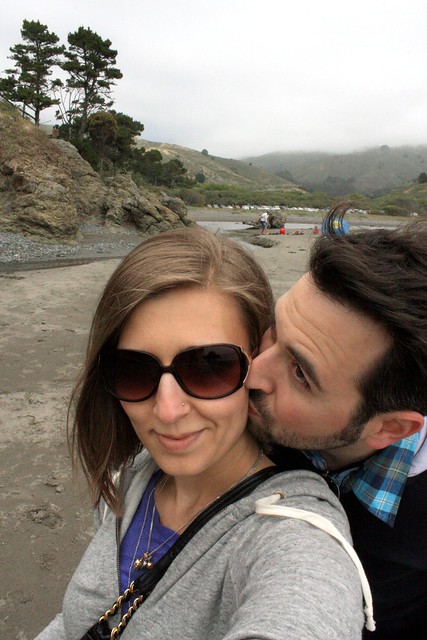