If my last voyage out to New York was the trip of cupcakes, then my most recent trip to San Francisco was the jaunt of ice cream.

Because in the few days that I spent there, I ate a lot of it. I can process dairy far better than the next gal (particularly if the next gal is, say, my friend Giselle, who’s entirely allergic to the stuff) but by the end of my trip I was a farty, bloated mess.

Of course, the ice cream was not entirely to blame. There was also pizza, and pasta, and copious quantities of cheese. But mostly, it was the frozen confection that did me in.

In spite of all of that, I regret absolutely nothing. It was a moral act, gobbling up all that ice cream. I sacrificed myself so that others might live without crippling gastrointestinal pain as a result of downing a gallon or so of frozen, churned milk. My work is still not finished, but I will share my findings with you, with the caveat that these results are not entirely conclusive. There are more sprinkles to pile on, more scoops to lick, more cones to gobble.

That sounded dirty. I did not mean for it to.

Our first stop in the Ice-Cream-Capades (see what I did there? If not, look again, because IT WAS BRILLIANT) was Humphry Slocombe’s. I’d heard about the place before, and had wanted to check it out for months. The flavors I’d read about were so far beyond the salted caramels and strawberry-basalmics that once passed for innovative in the world of ice cream. They offer concoctions like “Secret Breakfast” (a mix of bourbon and cornflakes), prosciutto, and foie gras.

I was positively itching to try it. I love dessert. I love dessert as a vehicle to consuming meat and booze even more. And yes, that includes the foie flavor. I’ve never truly gotten into the foie debate on my blog. I prefer instead to focus on all the other evil things that I’m not presently partaking in.

Like clubbing baby seals. Sometime in the future I’m planning on running an entirely senatorial campaign on the fact that I’ve never beaten one to death. 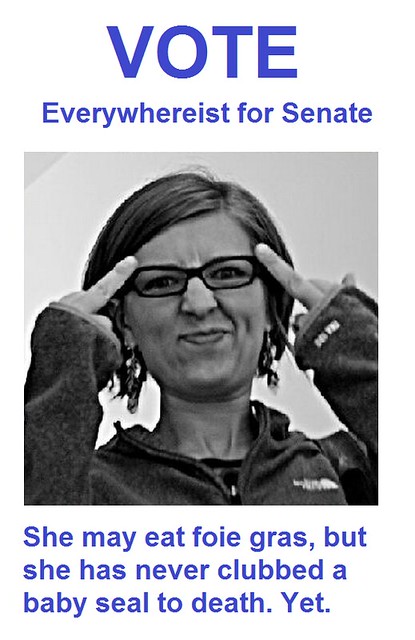 I added "yet" because I like to keep my options open.

It was a chilly evening when we found Humphry Slocombe’s, rather by accident. I had mentioned I wanted to visit the shop, and while we were searching for our dinner spot, we happened to walk right passed it.

Some small part of me wants to tell you that we headed to our lovely dinner, undeterred, and then came back to eat ice cream. Because that, I think, would have been the responsible thing to do. The truth is, though, that Rand and I got ice cream first. Before dinner. And we were able to justify it thusly: We’re grown-ups. People are always down on adulthood, but if you swing it right, it’s a truly magical experience.

So we got ice cream first, and pizza later.

The line at Humphry Slocombe’s was out the door at 8:30pm on a weeknight. 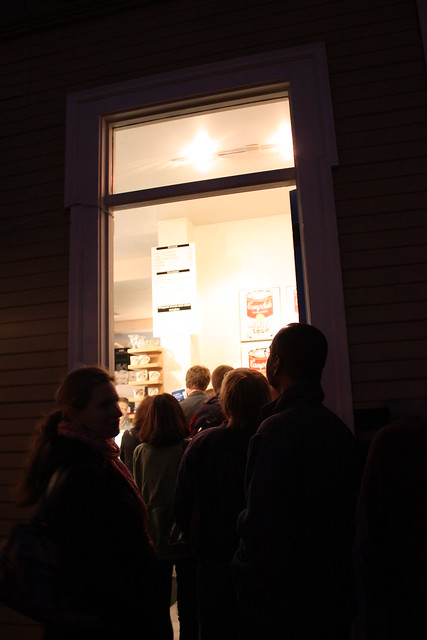 We had no idea what the flavors were, no idea if standing in this long line was to be worth it. Once inside, though, I began to suspect that maybe this was my kind of establishment. 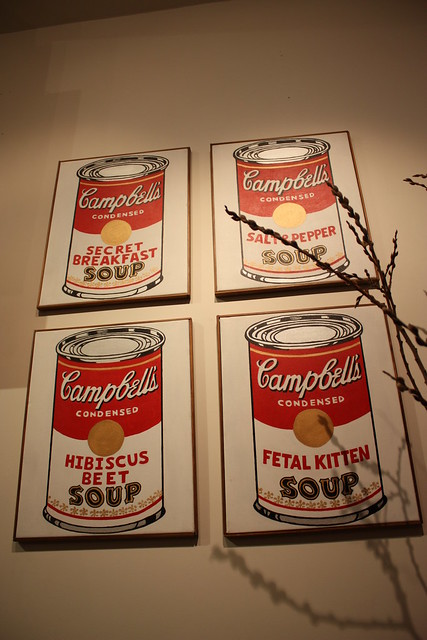 Yay! I love me some fetal kitten soup.

Rand and I inspected the flavors that were on display. I’d have liked to have sampled much more than we did, but the line was long, and I didn’t want to hold things up. The flavors were interesting, sure, but I was hoping for a bit more exoticism. Not a single meat-flavored ice cream was on the menu that night. 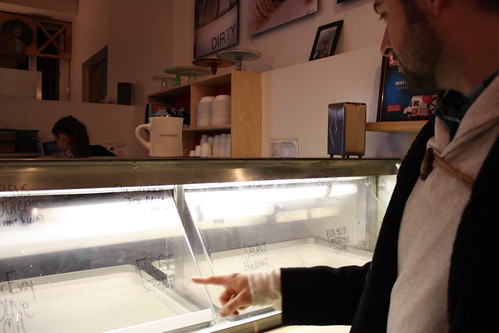 I got two scoops: McEvoy olive oil, and brown sugar with fennel. The ice cream was smooth and rich, the flavors surprisingly mild and elegant. It’s like Ben & Jerry’s gone classy. The olive oil had a slight citrusy tartness to it, and the fennel was much more floral than I would have imagined (I had anticipated a robust licorice flavor. It was barely reminiscent of that). I can’t remember what Rand ordered, but perhaps that’s unimportant. His face really says it all on this one: 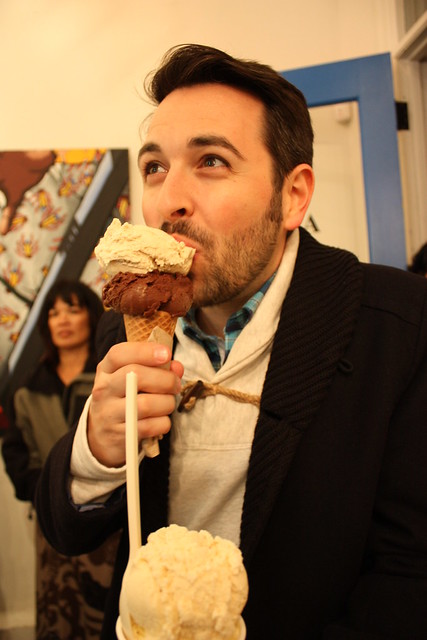 Holy crap, this is adorable. If I haven't said so before, I highly recommend marrying Rand.

By the time we finally got to dinner, we may have been giddy with sugar. The waitress at the restaurant looked at us warily. Perhaps she could tell, by the ice cream smeared on our faces, what we had done.

“DON’T JUDGE US!” I may have screamed in reply (the details are hazy). “ONE DAY I WILL BE A SENATOR!” I will win on an anti-seal-clubbing campaign.

Next up on our ice cream tour was Bi-Rite Creamery. This time, we had our friend Lauren in tow. She lives in San Francisco, and is kind enough to indulge all our gastronomical whims. Plus, she is a great stand-in for me when I am taking photos: she is small and Italian and has a tendency to say whatever pops into her head. 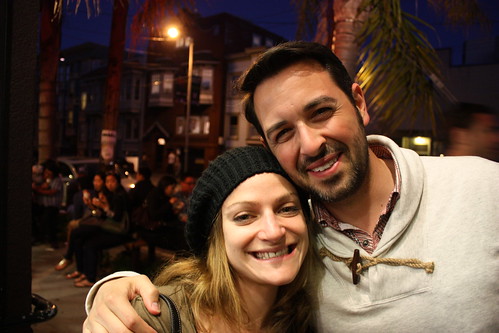 She is also wearing my hat.

We’d been to Bi-Rite once before, so we knew to expect a long line. Fortunately, Lauren was able to keep Rand company while I ran around snapping photos. 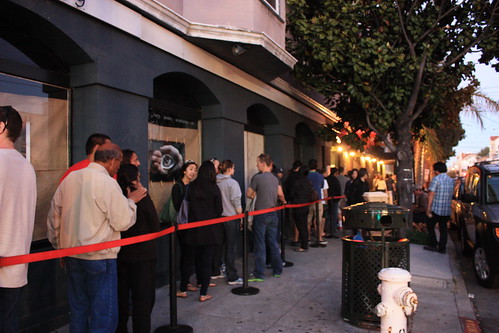 The line went down the street. 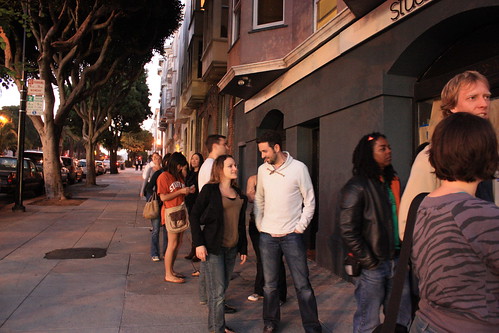 And around the corner.

We finally made it inside. The flavors spread out before us were creative but not nearly as “out there” as Humphry Slocombe’s: creme fraiche, toasted banana, malted vanilla, and yes, salted caramel and balsamic strawberry. It was experimental, but still familiar. 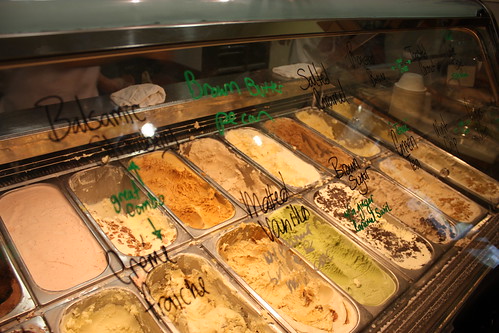 I opted for salted caramel and snickerdoodle. They paired nicely together. 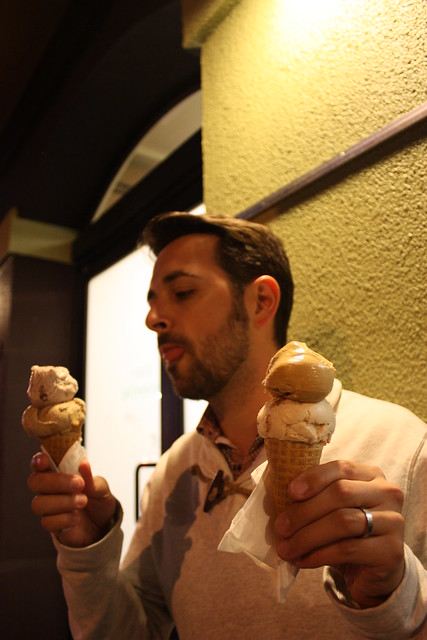 It felt more like dessert than Humphry’s – sweeter, and chock full of candy pieces or cookies or caramel swirls. We enjoyed it a lot. So much, in fact, THAT WE ALMOST DIED.

Well, not really, but kind of.

We were crossing the street, distracted by the deliciousness of our ice cream, when a woman in her vehicle started backing up out of her parking spot on the street, and into the crosswalk. Specifically, it was headed straight towards Lauren.

Now, I’ve always liked to think that I’d be pretty good in an emergency. I’m not saying I could foil a bank robbery, but maybe I could tackle a purse-snatcher. Unfortunately, I found that’s not the case. Lauren was right next to me as we crossed the street, and as I saw the car backing up towards her, I didn’t push her out of the way, or rush her along, or even shout, “CAR!”

Nope. Instead, I stood there, in a deer-in-the-headlights fashion, and gently hugged Lauren to me. Yeah. I hugged her. I imagine I have a great future as an ineffectual superhero named Cuddle Girl. I won’t stop you from getting robbed, but I’ll hug you after the fact. Or possibly during. That might make you feel a little better, right?

Anywho, I’m pleased to report that Lauren was fine. The vehicle merely nudged us (Rand did a great job of banging on the trunk and screaming at the driver, who drove off without EVEN BOTHERING TO CHECK ON US), but in the process, Lauren dropped her spoon. 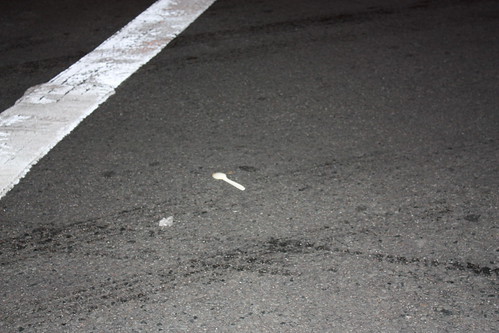 The lone casualty of our excursion.

She did not let this deter her. 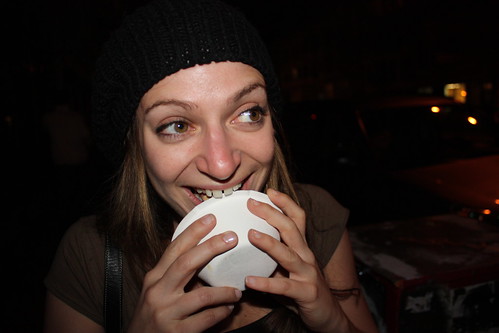 She's totally going to kill me for this picture, but I think she looks like an adorable, demented rabbit.

It was all a testament to how good Bi-Rite is. I can think of the tagline now: “So delicious, you’ll almost get hit by a car.” Catchy, right?

Like I said, my results were inconclusive at best. I’d recommended both Bi-Rite and Humphry’s to anyone who happens upon them. The lines are long, but they move quickly, and both are a fairly unique experience: boutique, artisan ice cream at a reasonable price. It just depends upon your mood. Humphry Slocombe’s is an experiment. It’s the sort of place where you’d take a date, but probably not the kids. You might not like all the flavors, but you’ll enjoy the experience. Relatively speaking, Bi-Rite is more traditional. The flavors are familiar, even if you’ve never seen them in ice cream form. It’s a place to get dessert that actually tastes like dessert.

Is one better than the other? It’s tough to say. I’ll have to return a few more times, in the name of research. Though I might add a few bike reflectors to my clothes, just in case.