Rand once told me that people are happier when they’re given fewer choices. He’d read an article on it. Something about how we still like to have options, but when we’re faced with too many of them, we get overwhelmed. Our instinctual reaction is try to limit our options to only a few, and failing that, to curl into a ball and suck our thumb until someone makes a decision for us.

By the way, that latter technique? TOTALLY works.

He mentioned this phenomenon to me one afternoon while I was standing in the middle of an IKEA on the verge of one of my patented and adorable nervous breakdowns. If you are unfamiliar with the Swedish furniture mecca that is IKEA, let me tell you now: it could drive the most resolute soul into a mad rage, could reduce the happiest of mortals into sniveling mess. In 1998, Gandhi punched a dude who was trying to snag the last OMSORG shoe tree in stock. True story.

It isn’t just that IKEA is a sensory-overloaded, windowless maze that forces you to go through the entire store before you are able to escape (a forty-minute excursion, if you maintain an average running speed of 1 mile every 6 minutes). Or that it’s filled with dozens of items that seem like a good idea until you get them home, and then have to explain to your husband why you bought a pack of 5,000 votive candles (“They were only $3.95!” is not a sufficient excuse), a mosquito net (WHEN YOU LIVE IN SEATTLE), or a lamp that only works with a wattage of bulb that is not available in North America except at friggin IKEA and YOU ARE SO NOT GOING BACK THERE. And it’s not even that IKEA products take several long years to assemble, and absolutely everything, even trash cans and garlic presses and wooden mixing spoons, need to be assembled (though that’s a big part of it. My marriage has been tested by an IKEA file cabinet. It currently sits in my office, quietly mocking me. One day I will hurl it out the window with the battle cry of a Norse god. But right now it holds my paper clips).

All of these elements contribute to the dark evil that is IKEA, but the biggest problem with the entire place? There are far too many options.

No matter how specific your needs, IKEA will have 17 potential solutions available in four different colors. Rand and I had spotted a wardrobe that looked perfect for us. When I asked an employee for help, he explained that it couldn’t be purchased in one package. We’d have to select the width of the wardrobe, along with the height and depth, all of which were available in 6 different sizes. We had to select the color of the wardrobe, the color of the doors, trim, and handles. We needed to chose all the interior features: coat racks, shoe racks, hat racks, sliding drawers (available in a myriad of sizes and colors), mirrors, cabinets, and hooks.

“There are,” the young employee told us, his eyes shining with perverse pleasure, “thousands of options.” (I hope he gets a splinter while assembling his IKEA coffee cup. I really do.)

And when I heard those words in the middle of the IKEA showroom, I did what so many have done before: I began to panic.

“You know,” he said calmly, with a sort of inner peace that would make the Dalai Lama proud, “we could just forget we ever saw this thing.”

I looked up at him, tears in my eyes. What was this madness coming from his lips?

Rand eyes twinkled, and his voice came out in an excited whisper.

“We could just buy that bookshelf over there to store our clothes. And then we wouldn’t have to worry about any of this.”

“Hubba wha?” I said. My brain was fried. IKEA is awful.

And so Rand gently grabbed my arm, and took me to the restaurant, the only safe haven in all of IKEA, where options are few and glorious, and bought me a piece of cake.

Then we bought a bookshelf in which to put our clothes, took it home, and didn’t fight at all when we assembled it. We are going to be married for a bazillion years, and all of them will be glorious. Here’s proof: 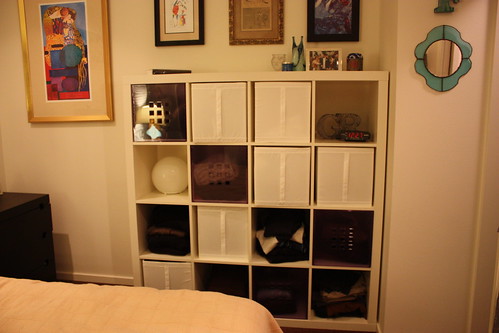 We store our clothes on a bookshelf. We're SO wacky.

That day at IKEA came to mind when I was once again faced with too many options. I was at Bogey’s in Hutchinson, Kansas. And sadly, Rand was not there.

Jason and I headed to Bogey’s after our journey to the Kansas Underground Salt Museum. 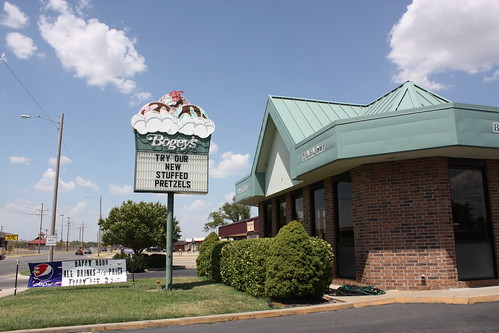 Whenever a restaurant has an image of ice cream on the sign, it's probably not going to be terribly healthy.

Bogey’s offers fairly standard fast food fare. They have a handful of fried entrees and side orders to choose from. I got a burger, which didn’t impress me much, and some fried okra, which did. Why we don’t have okra in the northwest is beyond me. Someone call the governor and tell her to get on this immediately. 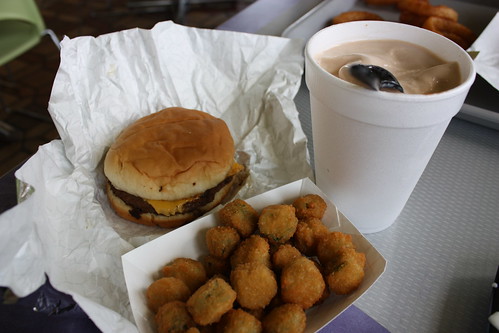 Oh, and I also got a shake, for which Bogey’s is known. IKEA may have 500 different closet combinations, but Bogey’s has 101 hundred different flavors of milkshakes. ONE HUNDRED AND ONE. For those of you who are bad at math, that’s one milkshake for every dalmatian. The list is daunting. 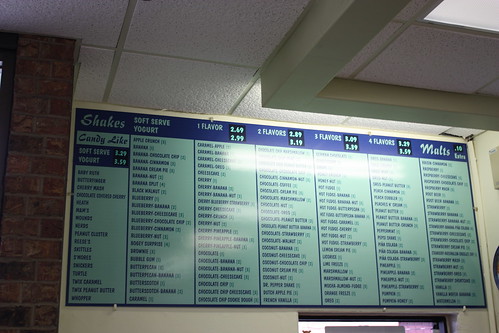 Faced with so many choices, very little time elapsed before I began to lose my mind. My eyes began to blur. Some of the flavors, like Dutch apple pie, made no sense at the time. Others, like hot-fudge-butter-pecan-banana still confound me.

I scanned the menu, and my eyes stopped on s’mores. I love s’mores. They one on the growing list of reasons I will never be a vegetarian.

But I’d read less than a tenth of the menu. Surely I couldn’t stop there, right? But as soon as I tried to read on, I got dizzy.

Strawberry marshmallow chocolate chip? THAT IS NOT A FLAVOR. THAT IS A GROCERY LIST.

Could I get something as relatively boring as s’mores? Didn’t I have to try a strange flavor? Or seven? My heart rate quickened. I was tempted to crawl into my shirt and scuttle out the door. But I remembered what Rand had said in IKEA. Sometimes, you can forget that you saw all those other options.

“I’ll have a s’mores shake,” I told the girl behind the counter. 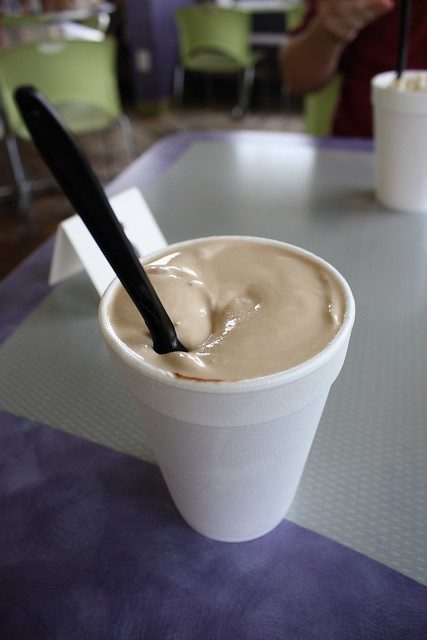 And I was very happy with that decision.