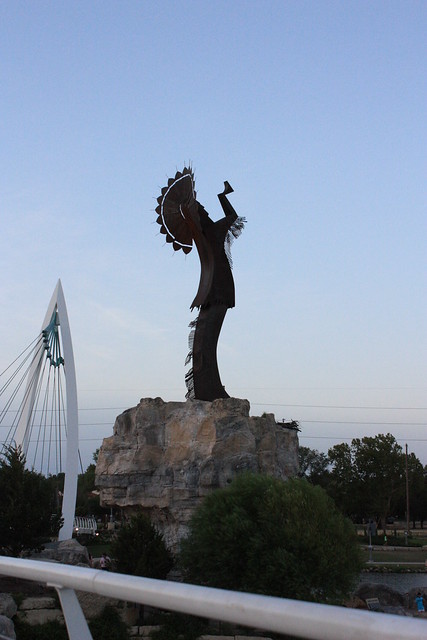 “We’re taking you to the Keeper of the Plains,” I was told, and there was little elaboration after that.

“You’ll see.” I must hand it to my friends. They know how to create suspense.

It turned out to be a 44-foot-tall statue of a Native American man standing at the crux of the Big and Little Arkansas (pronounced “Our Kansas”, for the record) Rivers in downtown Wichita.  A raised hatchet in one arm, its headdress and fringed pants seeming to blow in the wind, the statue looms tall over the nearby bridges and park that offer views of it and the river. It is a tranquil place, but as a white American woman from a devoutly-PC part of the country, I found myself looking around and thinking, “This is cool, right? We aren’t offending anyone?”

It’s the same twitchy concern that I suspect many European-Americans feel when they see anything relating to the Native Americans. The desire to raise up one’s hands and say, “Hey, we’re cool, right? I’m somewhat aware of all the atrocities that happened to the myriad of native peoples in North America, and feel that it ranks fairly high on the scale of genocidal heinousness, but you and I … we’re cool, right?”

The question usually goes unasked and unanswered. Instead, I simply try to appreciate where I am with a good measure of reverence and quiet nodding, and try to casually mention to anyone within earshot that my family has only been in the United States for 30 years or so, so really, I can’t be held accountable for anything. Never mind that no one is accusing me. Never mind that this is beside the point.

Putting aside America’s complicated and less-than-stellar history with the native peoples of North America, the statue, billed as one of the finalists for the 8 Wonders of Kansas (but not actually making the final cut), is worth a visit. Designed in the mid-seventies by Native American Artist Blackbear Bosin, the statue manages to not look out of place next to the decidedly modern suspension bridges that span the rivers. 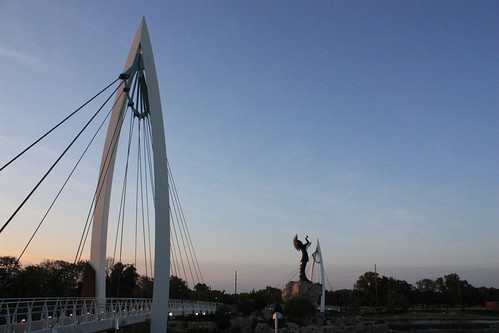 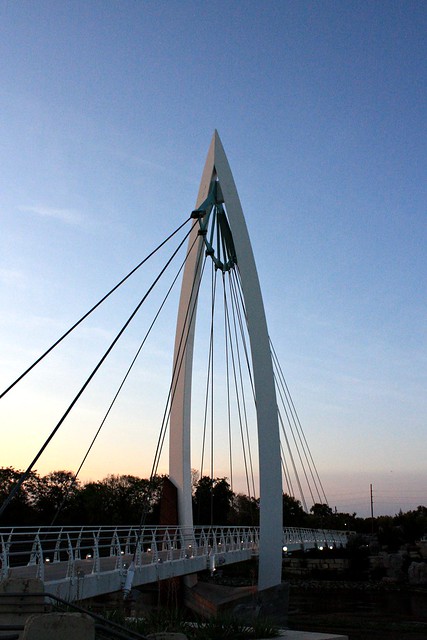 From the pedestrian-only bridges, you can get a fantastic view of where the rivers meet. This area was once home to the Wichita tribe, who considered the land sacred. 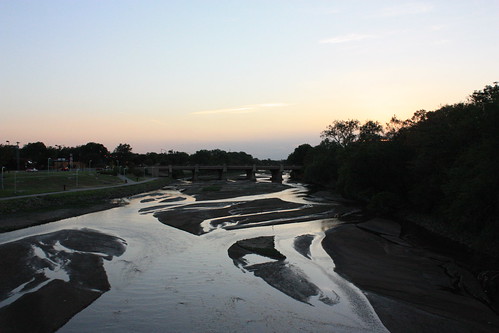 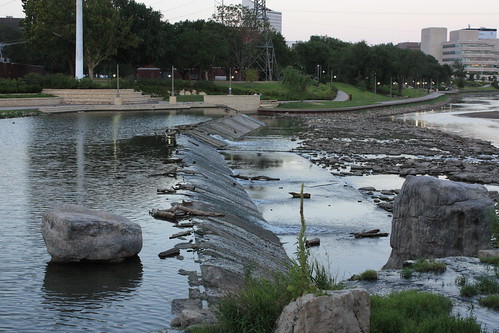 –
Though it was closed when we reached the statue at sunset, the Mid-America All-Indian center is nearby, and features a museum with flags of the 549 sovereign tribes of the United States. Instead, we roamed around the surroundings areas and enjoyed the view while we waited for the 9pm Ring of Fire show. 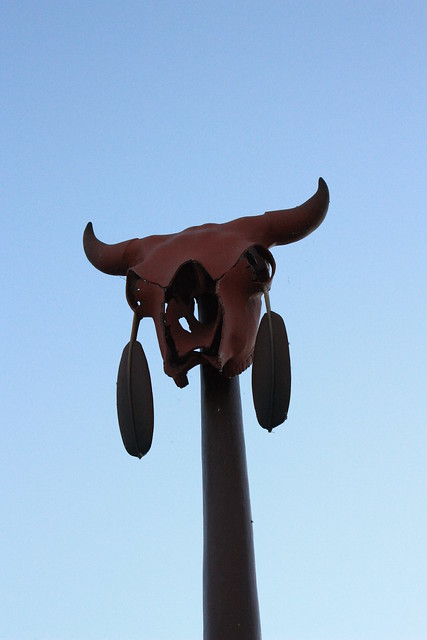 I am ridiculously proud of this photo, despite the fact that it is underexposed.

I found this spot of dried mud particularly fascinating – and no, there is no sarcasm to detect in that statement. I come from Seattle, where mud never, ever has a chance to dry. Indeed, it’s rare that there is dirt that isn’t mud. 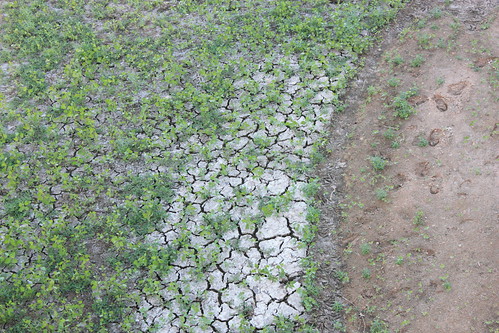 Seriously, I've never seen anything like this outside of shows on the Discovery channel.

It was slightly cooler by the river, and there are misters in the ground that shoot up gentle sprays of water. My friend’s three-year old pressed his hand against it and astutely noted, “It’s water.” 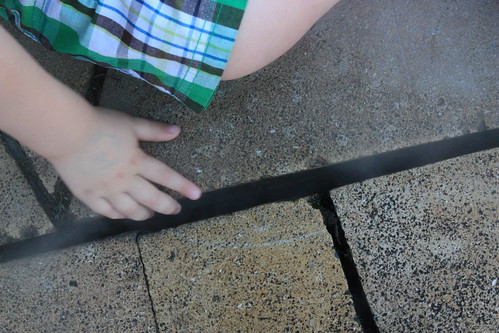 I found it all surprisingly peaceful. The integration of the new construction with the old, the man-made features with the natural landscape – the result was downright harmonious. It made you want to pause and look around and take it all in. 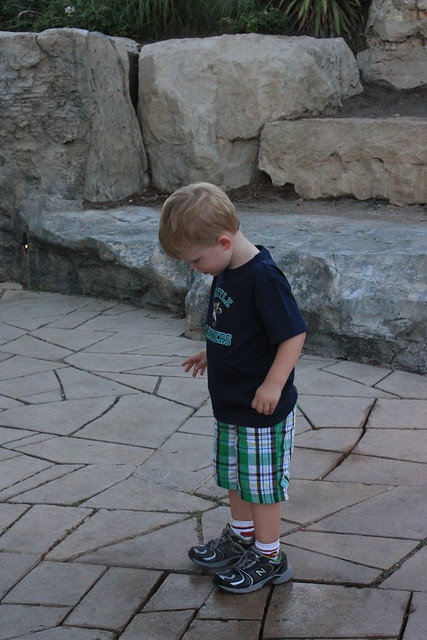 –
Even the nightly Ring of Fire show manages to not be terribly jarring or nerve-wracking, and it involves huge, gas-powered pits of fire that light up around the statue (considering that the day’s temperatures had peaked at well over 100 degrees, close proximity to a giant fire was not ranking high on my to-do list. I suspect it’s nice in the wintertime, though). 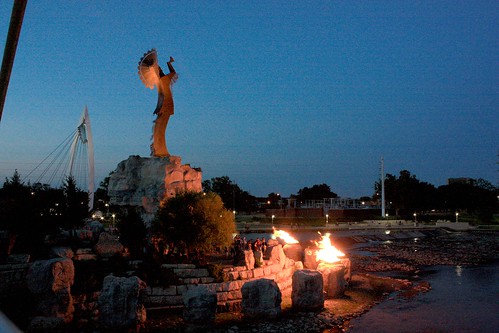 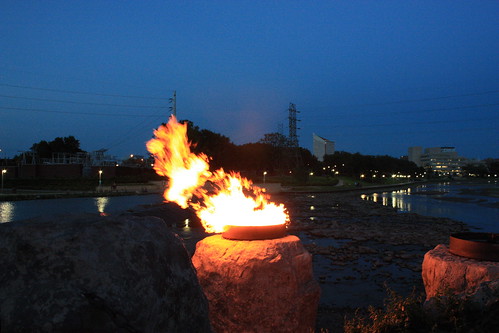 The Essentials on the Keeper of the Plains statue and surrounding plaza:

How to get there: Bwah ha ha ha – you think I know my way around Wichita? I get lost on my way downstairs. (Okay, fine – it’s at 650 North Seneca, in the conveniently named Keeper of the Plains Plaza. You will obviously need a rental car.)

Ideal for: Families, bird-watchers (there are a few indigenous species hovering around the river), architecture lovers. The entire park is wheelchair accessible.

Insider Tips: The plaza does not offer a lot of shade, so choose a day when temperatures aren’t too extreme, or go in the early evening after the heat has died down. The nightly Ring of Fire show lasts 15 minutes, and starts at 9pm during Daylight Savings months (spring and summer) and 7pm during standard time (fall and winter). The show may be cancelled due to inclement weather, high winds, or if the depth of the river is deemed too high. If you want to visit the Mid-America Indian Center, you’ll have to arrive earlier (check their website for exact hours).

Good for Kids: We wandered around with my friends’ 3-year-old son, and while he enjoyed running around the area, there’s not a lot to stop a precocious toddler from hurling himself into the water, if he so desired (at one point his father declared, “I just know I’m going to end up diving in after him”). So keep a close eye on little ones, especially if they’re the adventurous sort. Older children should be just fine, and the statue/Ring of Fire show would probably be fun for them.