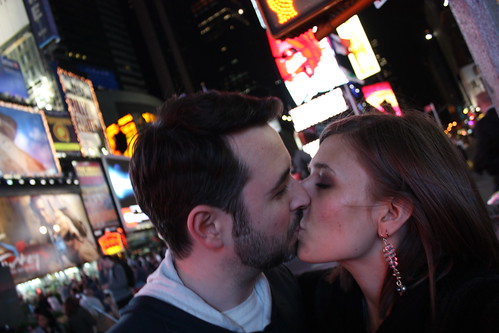 With the man I love, in the city I love. Not a bad night.

September 11th came and went, and I was somewhat relieved it was on a Sunday, meaning that I didn’t necessarily have to post about it. Because, as selfish as this may sound, I’m truly terrible when it comes to writing about tragedies or events that deserve respect. I try to seek out the good in the bad, even when it’s not entirely appropriate to do so. I’m the kind that tries to crack an awkward joke at funerals in order to lighten the mood, and usually ends up offending everyone. I know. I’m a disaster. Never invite me to your dinner parties.

You can see why I was relieved that September 11th, then, fell on a Sunday, and that I was able to leave it to newscasters and journalists and writers to do it some justice while I sat back and watched highlights from the  team from Washington and Giants game and kept my mouth shut.

It’s now the Monday after, and as I drove passed a fire station, with a flag hanging out front at half-mast, I realized there is a story I would like to tell. It is indirectly related to the events of September 11th, and so mentioning it on the 12th seems perfectly fine. I want to tell you about the first time I fell in love with New York. I was 14.

I had crushes on New York before then, of course. I visited it once when I was 5 or 6, during the winter. I walked down the slushy streets, marveling at the lights and noise. The subway felt like a carnival ride. Repeated viewings of The Muppets Take Manhattan helped to solidify my girlish infatuation (I can safely say I have seen that film more than any other – at least five dozen times or so). I was convinced that if I looked hard enough, I’d find Kermit and Miss Piggy hanging out in Midtown.

But falling in love with New York would not happen until the early 90s. We were living in Florida, but about to move back to Seattle. My mother, realizing that it was one of her last chances to do, decided to take her mother to New York for the first time. My great-grandfather spent the last years of his too-short life there, and my nonna had never seen his grave.

My family’s story of immigration should have started in New York. Decades ago, my great-grandfather left Italy, promising to send for his wife and daughters (one of which was my nonna) when he got on his feet. He never quite managed to do that, and died in Manhattan when his youngest daughter, back in Italy, was barely out of diapers. My grandmother, the eldest of the six girls, picked up the helm and helped to raise her sisters. She later met my grandfather, and had children who eventually emigrated to the states, bringing her along.

But had things gone the way my great-grandfather had intended, she’d have lived in New York. She’d have married someone else. And all those tiny little circumstances that led to my own existence would not have come to pass. It doesn’t make his death less tragic and sad. It’s a simple reminder that sometimes good comes from bad.

That other reality, the one in which I was never born, is a hard one for me to fathom. Not because it negates my own existence (that, for some reason, is easy for me to imagine. Maybe it’s because I’ve traveled to so many places – the middle of Times Square, the Pantheon at Rome, even a traffic jam in L.A. – that were so brimming with life, I’ve come to realize I’m not such a big deal). Instead, what’s hard for me to grasp is the notion of my grandmother as an American.

One might as well wonder what would happen if Napoleon were tall or Marilyn Monroe flat-chested. My grandmother was Italian. She didn’t speak a word of English, she cooked my grandfather pasta every night. She liked the quiet and the countryside. She was no New Yorker.

But when the opportunity presented itself, realizing it would likely be the only chance she got, she went with my mother to see her own father’s grave. We stayed with Anna – an Italian woman my mother had known for so long, I considered her an aunt. My mother, figuring that I wouldn’t enjoy running around a graveyard in the cold (Oh, how little she knows me!) left me in Anna’s care, and I spent the day with her and her family. Exploring Governors Island, on which they lived, staring at the city from across the water, and squandering away my time the way only teenagers can. I don’t remember much of that trip really, or of my time there. I remember only this – that at one point, on the ferry from Governors Island to Manhattan, at dusk, I looked up at the city as it rapidly approached. I stared at the skyline – one that still included the twin towers – lit up against an indigo backdrop, and declared New York the most beautiful city in the world. I never wanted to leave.

And just like that, I was in love. I must take from my great-grandfather.

Less than ten years later, that skyline would forever changed. The towers fell four months after my grandmother died, and two months after my grandfather did. I was subsequently dumped by my boyfriend and by my therapist, who declared my problems “beyond the scope of the clinic.” I tried to make sense of things. I’d long ago learned that the happenings of my life did not impact the world, but now, almost simultaneously, things were falling apart everywhere. My tragedies were a joke compared to what others were going through, and still, I cried. I drank too much. I whined incessantly at friend of mine who was, at the time, good enough to listen. To thank her, I took her to a concert. I joked to her that I was going to meet a guy that night.

And on the bus back from the show, standing up to give his seat to an elderly woman, I spotted the man who’d become my husband. He was supposed to see the same band months ago, but that show, scheduled for the 11th of September, 2011, had been cancelled. He’d been at the same concert, caught the same bus. On the night that he gave his seat on the bus to an old woman, he’d later give his email to me.

In the following years, he’d take me to New York, again and again. He’d tell me how his parents were from there, how they’d met and gotten married. How their anniversary was, of all days, the eleventh of September.

Tragedies are unavoidable. The specifics may change, sure – we can swerve our vehicle to avoid a car accident. We can miss an ill-fated flight. But we aren’t immortal. Disaster strikes us all, in different ways. We lose loved ones. Loved ones lose us. If we’re very, very lucky, we can find good in the bad. It doesn’t make it worth it, doesn’t make it any less tragic or awful, but it does help makes sense of the crap we all go through. It helps us go on.

Sometimes your great-grandfather has to die alone in New York for you to even exist. Sometimes epic tragedies lead you to the love of your life. I heard that nine months after the towers fell, there was a baby boom. A bunch of squishy, adorable babies, born as a result of the events of that day in September. In another ten or fifteen years, I imagine some of those children, now grown, will find their way to New York.

And I can only hope, when they look at the skyline – though different than the one I saw all those years ago – they fall in love just like I did.