Sometimes, I am convinced I am beastly.

I’m not saying this to solicit compliments – when I want compliments, I simply look at my husband and say, “Babe, don’t I look wonderful?” and then reply to my own question in a bizarre sing-song voice that is not-at-all reminiscent of Rand’s, “OH MY GOD, YES. No part of you looks less than awesome.”

I highly recommend this approach. It is far better than nervously waiting for someone to say you look great.

No, when I say that I sometimes feel beastly it is because I suspect I am turning into the wolfman (see: long, unkempt fingernails, proliferation of body hair). I realize I shouldn’t complain. While not necessarily a genetic lottery winner, I’d say I got four out of six numbers right. By no means did I hit the jackpot in the looks department, but I came away with a modest sum that, given the alternative of nothing, few people would refuse.

But when I spend enough time on the road, I begin to feel, as a friend of mine put it, “like a hot mess.” Yesterday I found myself on the streets of New York with a stained t-shirt (owning to a rough soap dispenser which, rather than squirt directly into my hand, decided instead to spray horizontally, directly onto my person. Allegories of early sexual escapades were not lost on me. I left the bathroom feeling, despite being doused with Dial, dirty.) I completed my sudsy ensemble with pants that were, I realized long after I left the hotel room and could do something about it, smeared with frosting.

I am 31 years old, and I collect momentos of earlier meals on my clothing. On that day, my trousers were like a scrapbook – the croissant I had eaten in Barcelona, crumbs from an over-priced hotel breakfast, and a few vague hypotheses about what meal caused that oily spot near my crotch (again, early sexual escapades came to mind, with ensuing guilt. Depending on how you see it, thoughts like these are precisely why you should or shouldn’t raise your children Catholic.)

I read that Anna Wintour, editor of Vogue, changes her outfit after take-off, putting on something more comfortable while she’s actually in the air, but making sure she steps on and off the plane in an emaculate suit. I’ve seen celebrities in airports and hotels (most recently Anna Faris in LAX) walking effortlessly in sky-high heels, nary a hair out of place. And I wonder, given all my travels, why I can’t, just once, arrive in a city looking like I haven’t slept in my clothes.

I usually answer this question by reminding myself that I am simply not that girl. I am wrinkled. I am smeared with frosting. And I am, if not in appearance then certainly in personality, a bit beastly. And precisely when I am resigned to this fate, when I am content in my hoodie and soon-to-be-if-not-already stained jeans, I find my husband staring at me. And unprovoked he says, “Man, you look great.” And he grabs my camera, and insists on taking a photo. I am in a setting that does not suit me – a posh hotel in Cuzco – but he swears that at that moment he sees the essence of me.

He immediately deletes the first photo he takes.

“That was … not flattering,” he says, diplomatically, blaming his photography skills. And then he snaps another: 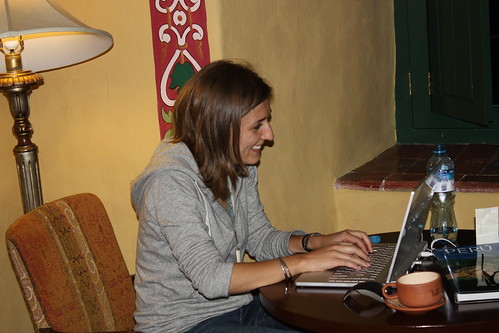 And it is not particularly stunning – it is not the flawless starlet who clicks her heels against the tiled floors of an international airport as she heads to her gate. But it isn’t bad. The clothes aren’t that wrinkled. The food stains aren’t that visible. And I am happy. In the genetic lottery I may have four numbers right out of six, but that, remarkably, seems to be enough. Especially when one isn’t married to a gambling man.