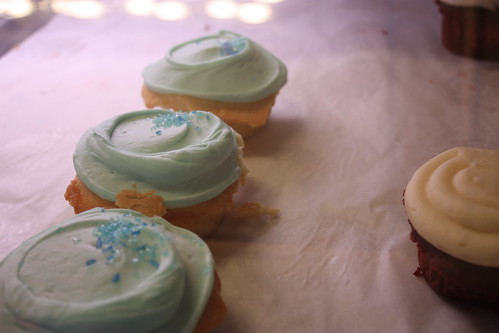 How have I let so much time pass without telling you about these?

It is late Sunday night, and I’m staring at my computer screen, trying to figure where the time went.

“How is the weekend already over?” I wonder (even after years of having no real obligations on Monday morning, I am still sad when it approaches).

And just earlier today, I asked a friend how, exactly, it was December already. And how can 2012 possibly be weeks away? How – sweet lord in heaven – how am I thirty-one years old and still have to stop myself from answering “Sixteen!” when people ask me my age? (And why, while we’re on the topic, do people keep asking me how old I am? Is it that much of a mystery?)

I close my eyes tightly, trying to take a mental catalog of the last few hours, days, weeks, months, and years. Did they all pass by so quickly? Did I miss anything? Did I forget to tell you anything?

There are things I’ve yet to get to, I know. Last summer’s trip to Ashland. The visit to the east coast that happened just before that. The journey to Machu Picchu right after. Barcelona. London. Halloween in New York. Thanksgiving in San Diego. They are all places that I will tell you about, as soon as my life calms down and my wheels of my rolling suitcase have had a chance to cool.

Really, there’s nothing that I have to tell you about that can’t wait. Except for one thing. Something of such importance, that I’m amazed I didn’t write about it sooner.

I need to tell you about the best cupcake I’ve ever had. And the middle of the night on a Sunday seems a perfectly good time to do it.

Rand and I were in New York this past August and in possession of a rental car. On our way out of the city (heading to Jersey to see Rand’s grandparents) we figured we’d swing by Philly and visit a friend. That’s something that’s always fascinated me about the Northeast: drive a few short hours, and you’ll find yourself in a different state, and a drastically different city. It seems that whenever we drive anywhere in New Jersey, Rand will excitedly turn to me and say, “Guess where we are?”

“No. We’re in Pennsylvania!”

It happens without fanfare or flourish. I will watch the trees passing by on the side of the road, and suddenly, miraculously, we are in another state. This is how we end up in Philadelphia. We leave New York on a hot, overcast morning, storm clouds rumbling on the horizon, listen to a few hours of NPR and Mumford and Sons, and end up in a place called Northern Liberties, in Philly.

It is there that we meet Rand’s friend and colleague Wil (with one L) and after a lunch during which things got far too intellectual for a Sunday, and the threatening skies finally open up on us, he tells us about Brown Betty. 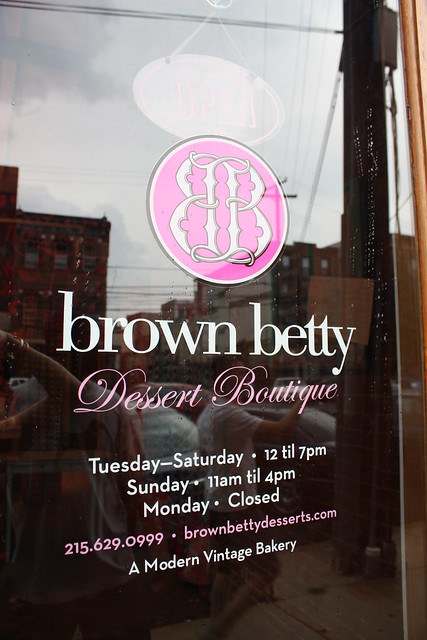 One of its many claims to fame? It was featured in Oprah Magazine. This didn’t immediately sway me: I still have yet to buy into The Secret or the holiday stylings of Josh Groban. Besides, when it comes to cupcakes I am a tough critic. I demand a moist cake with golden edges that are just a weensy bit crisp. A frosting that tastes of something more than sugar (vanilla, perhaps?), has a bit of salt for height, and develops a nice crust that provides just a little bit of resistance as you bite down.

And, rather remarkably, the cupcakes at Brown Betty meet all of my demands. They are enormous, and almost creamy in texture. And yet, they are not overwhelming. The sweetness is actually quite moderate: it doesn’t cloyingly coat your tongue,  and it spares you the slightly-revolting-feeling that comes from having ingested half a pound each of sugar and butter. These cupcakes are, despite their miraculous size, subtle in flavor. 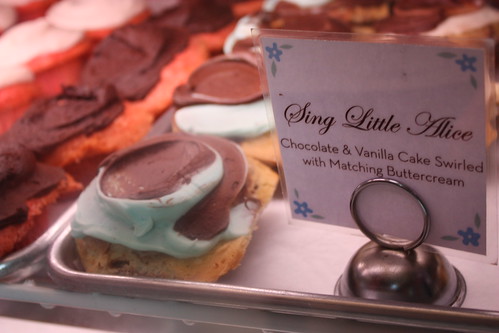 Rand got the “Sing Little Alice” a chocolate-vanilla marble cake with chocolate and vanilla frosting. 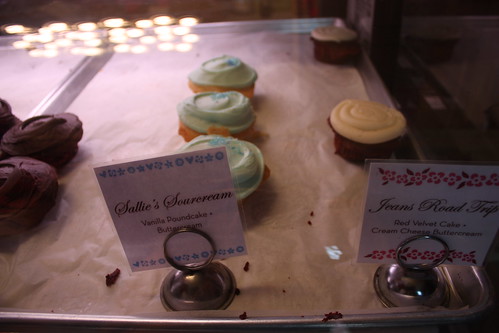 Ever the traditionalist, I went with Sally’s Sour Cream. It was heavenly and light, and not at all indicative of the condiment in its name.

The store is darling. Decorated in pink and brown (like all good cupcake shops should be) it looks like a confection, and yet there is something gritty and down-to-earth about the shop. Perhaps it is the less-than-perfect appearance of the cupcakes. They do not look like they were made in a professional kitchen, but rather in the home of some genius friend who happens to have a sweet tooth and a less-than-steady frosting hand. The girl behind the counter is friendly and courteous while still being all business. She tells us the cupcakes she prefers, takes our order quickly and competently. We order three – one each for me, Rand, and Wil, and they are packed in individual plastic cases (no pink boxes for this place, and that’s fine by me. I like to gaze at my cakes before I devour them). 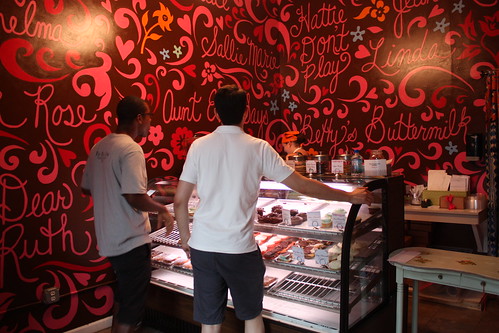 Rand and Wil pick out their cakes. 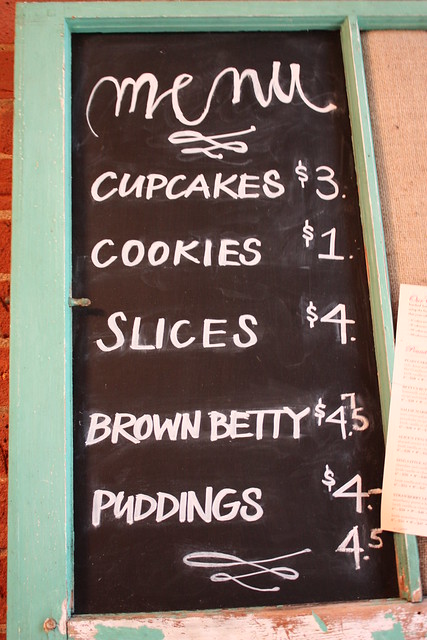 If I ran the world, all menus would look like this.

The surrounding area, much like the store itself, is a mix of glamor and grit. Wil explains that it’s changed considerably in the last few decades. It wasn’t a particularly wealthy part of town when he was a kid, but now it’s full of trendy boutiques and restaurants, modern condos and offices (including Wil’s company’s headquarters which are located – no kidding – in a renovated church).  The issue of gentrification in the area is a heated one – many residents say it’s at the expense of the neighborhood’s soul. As a visitor, I’m not able to pick up on this – I just blithely see the charm of the area. I look no further than the frosting on my cupcake or the facades on the buildings. 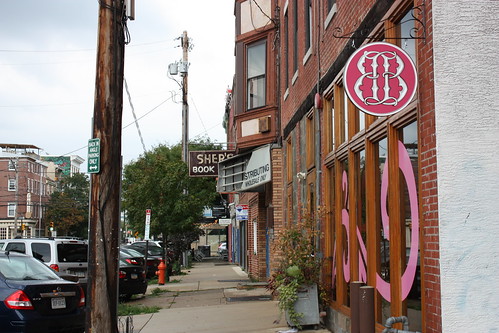 It is getting late – we need to head back to Jersey, and Wil needs to be in New York that night. There’s comfort in the fact that many of our friends travel as much as we do.  We say goodbye, and as we head back to Flemington, I occasionally peek at the desserts nestled near my feet. 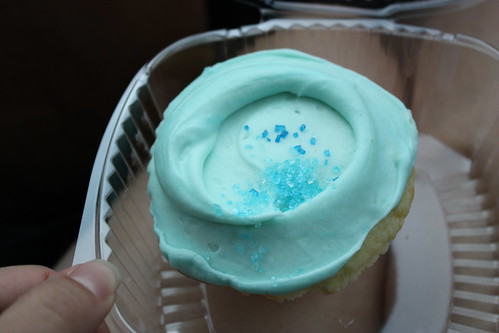 I worry there won’t be enough for everyone, but Rand reminds me that his grandparents aren’t big on sweets. While this is true, it proves to not apply to these cupcakes. They are so delicious, we all devour them on a rainy night in his grandparents’ kitchen, and I am left pressing my finger against the last few crumbs and depositing them on my tongue.

And I am very, very happy.

It remains perhaps the best cupcake I’ve ever eaten. An unforgettable one, really. Which is why I can’t believe I almost forgot to tell you about it.